This chapter is most relevant to Section F6(vi) from the 2017 CICM Primary Syllabus, which expects the exam candidates to be able to "explain the concept of shunt, its physiological effects and its measurement".  This chapter will focus on "its physiological effects", which could be easily summarised as "all gas-related things get worse". It is remarkable that this has never appeared in the past papers, and by this very fact one may be assured that one day it will.

The best free peer-reviewed reference for this is Bigeleisen (2001), which is an excellent resource to "help students master these equations as well as their practical limitations". Original papers by J.F Nunn (1966) and later works by Petersson & Glenny (2014) are also useful. From the non-peer-reviewed FOAM world, the shunt post from the PFTforum blog is an excellent overview, though it may earn undeserved scowls of disapproval from the FOAM-weary CICM Illuminati.

Effect of shunt on oxygenation, and effect of oxygen on shunt

In short, venous admixture gives rise to systemic hypoxemia. The degree of hypoxemia is generally said to be roughly proportional to the shunt fraction. This relationship was discussed at great detail here at the PFTforum, and their graph is reproduced here with zero permission but in the spirit of Creative Commons camaraderie: 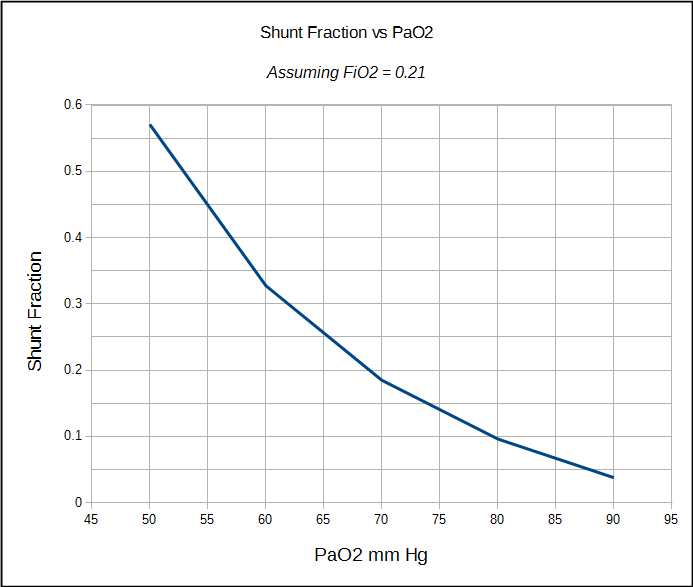 This is a demonstration of the range of arterial PO2 values one may be expected to generate as one's shunt increases. At a shunt of 50%, the arterial oxygen tension at 21% FiO2 is somewhere in the order of 53 mmHg. A shunt fraction of 25% is enough to drop one's oxygen saturation into the low 90s, prompting worried nursing staff to increase the oxygen flow rates. The latter manoeuvre, however, may have little effect.

Effect of oxygenation on shunt

As is mentioned in the end of the chapter on the measurement of shunt, lung regions with true shunt (V/Q = 0) are not expected to increase their endcapillary oxygen content in response to an increase in alveolar oxygen. From this, one might expect that, as the shunt fraction increases, so the increase of FiO2 should yield smaller and smaller benefits, ultimately becoming pointless. This is indeed the scenario described by Nunn's iso-shunt lines, which one can find in virtually any physiology textbook (most of all in Nunn's). 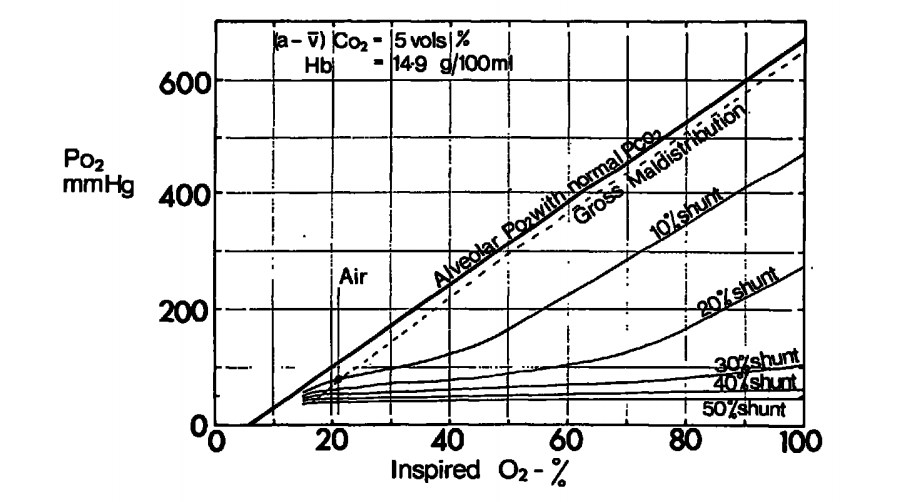 In short, this is a graphical representation of the effect of increasing the FiO2 on the arterial oxygenation, at different degrees of shunt. This thing appears to have its origin in a 1966 paper by J.F Nunn, where no experimental data or calculations are offered in support of it (so presumably it comes from another, earlier publication by the same author). The original 1966 image is used here, out of immense respect for the author. Later editions of his textbook justify the existence of this graph by saying that "it has been found useful to prepare a graph of the relationship at different levels of venous admixture", because one finds oneself constantly obsessing over the FiO2 and PaO2 in the course of clinical practice. It would indeed have been very useful in the distant past where oxygen saturation monitoring was unknown and one needed to adjust the FiO2 on the basis of infrequent PaO2 measurements. In practice, "despite their simplicity, the isoshunt lines did not achieve popularity because pulmonary critical care involves treating more than a single parameter and because it was impractical to carry the nomogram around" (Bigeleisen, 2001). The main use of this graph in the modern era is to demonstrate for students of physiology that, with a true shunt of 50%, one's fiddling with the FiO2 knob on the ventilator will yield little improvement in oxygenation.

Effects of shunt on CO2 clearance

In short, shunt does not make much of a difference to CO2 clearance, and in fact CO2 clearance may increase in the presence of a massive shunt.

Now, the blood which travels through non-shunt regions of the lung may already be maximally oxygenated by the available oxygen, and an increase in FiO2 will not change the arterial oxygenation. However, that non-shunt blood is not maximally decarboxylated, and increasing the minute ventilation will still yield a reasonable improvement in CO2 clearance even in the presence of a large shunt. This is enhanced by the hypoxic ventilatory drive which will increase the respiratory rate irrespective of the arterial CO2 tension. In short, any patient with the capacity to increase their minute ventilation will be able to compensate for the hypercapnic effects of even a very large shunt.

But let's say the patient was unable to increase their minute volume, and the shunt fraction was substantial. how much would the PaCO2 increase? Turns out, not very much.  Niklason et al (2008) determined that a shunt fraction of 50% would only increase the PaCO2 by 15-30%, and that's in a patient whose minute volume was fixed. Their original images are reproduced below: 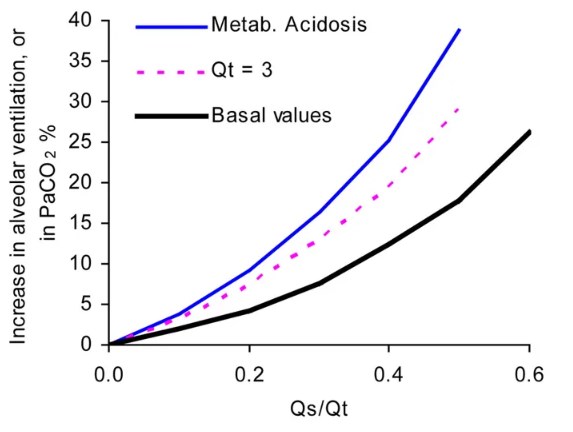 As one can see, the increase in PaCO2 was greatest where cardiac output was low ("Qt = 3" on their graph means a cardiac output of 3L/min, or a cardiac index around 1.7). The main reason for this was thought to be an increase in mixed venous CO2, and therefore more CO2 delivery through the shunt. Similarly, where there was a metabolic acidosis, the effect of the shunt on PaCO2 was higher because metabolic acidosis suppresses the Haldane effect (Cavaliere et al, 2002), decreasing the affinity of deoxygenated haemoglobin for CO2 and therefore increasing the concentration of free CO2 in the venous blood.

Said, Sami I., and Chandra M. Banerjee. "Venous admixture to the pulmonary circulation in human subjects breathing 100 per cent oxygen." The Journal of clinical investigation 42.4 (1963): 507-515.

Riley, RiL, and A. Cournand. "Analysis of factors affecting partial pressures of oxygen and carbon dioxide in gas and blood of lungs: theory." Journal of applied physiology 4.2 (1951): 77-101.