This chapter is most relevant to Section F7(i) from the 2017 CICM Primary Syllabus, which expects the exam candidates to be able to "describe and explain the oxygen cascade".  This has come up in Question 17 from the first paper of 2015 and Question 11 from the first paper of 2013. The college remarks associated with these questions were fairly uninformative, but from what one can gather, the examiners were looking for  "an ordered journey from the atmosphere to the mitochondria", ideally described with the aid of a diagram. Forever coveting redundant narrative devices, the author was all too eager to embark upon such a "journey", to say nothing of the opportunity to create vector artwork.

The main points in the oxygen cascade:

Or, without the thousand words: 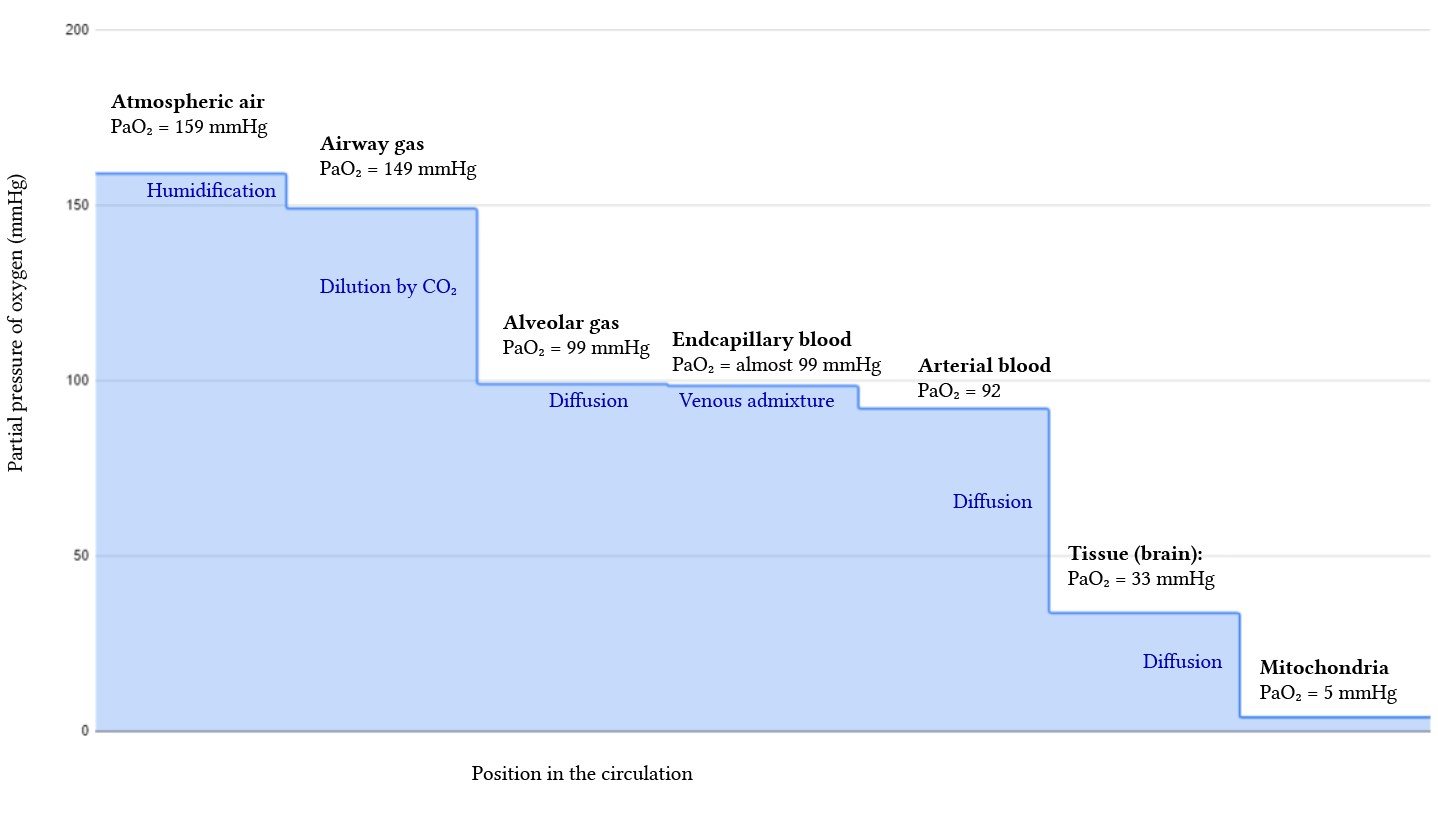 The first reference to this thing (the first time it is mentioned as a "cascade") is in Fenn & Rahn's Handbook of Physiology (vol. 2, 1965), where Luft used it to illustrate a chapter on aviation physiology. It has subsequently propagated through many published works, but in most cases, the author dwells on it for only a paragraph or two, making it difficult to recommend any of them as the definitive resource. When it comes to "definitive", the best free peer-reviewed reference for this is probably the paper by George Biro (2013), the title of which ("From the atmosphere to the mitochondrion: the oxygen cascade") seemed to make it an ideal compass for this directionless chapter. Unfortunately, it is nothing if not comprehensive (one is on page nine before one even gets to the first step of the cascade), and though it is available for free from researchgate.com the time-poor exam candidate may instead wish to seek refuge from its superfluous detail in articles like Ortiz-Prado et al (2019) and official textbooks such as Chambers' Basic Physiology for Anaesthetists.

The college, in their stem for Question 17 from the first paper of 2015, specifically asked for a discussion of sea-level oxygen cascade events, which implies a starting atmospheric pressure of 760 mmHg. Without going off on a tangent, it will suffice to say that atmospheric oxygen content is 21%, which at sea level is (760 × 0.21) = 159.6 mmHg.  This is the oxygen tension of dry room air, and represents the first stop on our "ordered journey".

If one were prone to pointless digressions, one could also illuminate this topic with a diagram of atmospheric oxygen tension plotted over increasing altitude, similar to the one from Ortiz-Prado et al (2019) but not copied directly from them because anybody can generate a graph from a spreadsheet: 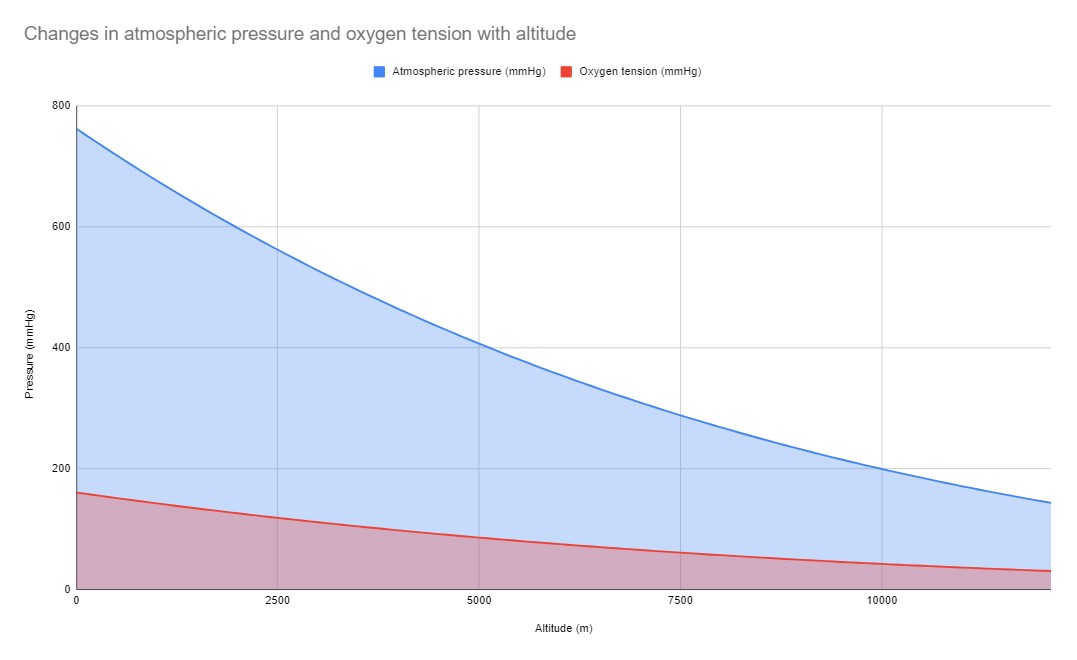 The next stop on the journey is the decrease in the partial pressure of oxygen (as well as all the other gases, let's not forget them) by water vapour, which occurs in the course of the normal humidifier function of the upper airways. Though the oxygen cascade is usually represented as a series of steps, in actual fact there is a gradual slope of decreasing oxygen tension though the airways, down to the isothermic boundary where the partial pressure of water vapour is maximal.  Borrowing data from Table 1 in Plotnikow et al (2018), one is again able to produce a chart of changing gas pressures on the way through the airway. It is somewhat inaccurate, given that 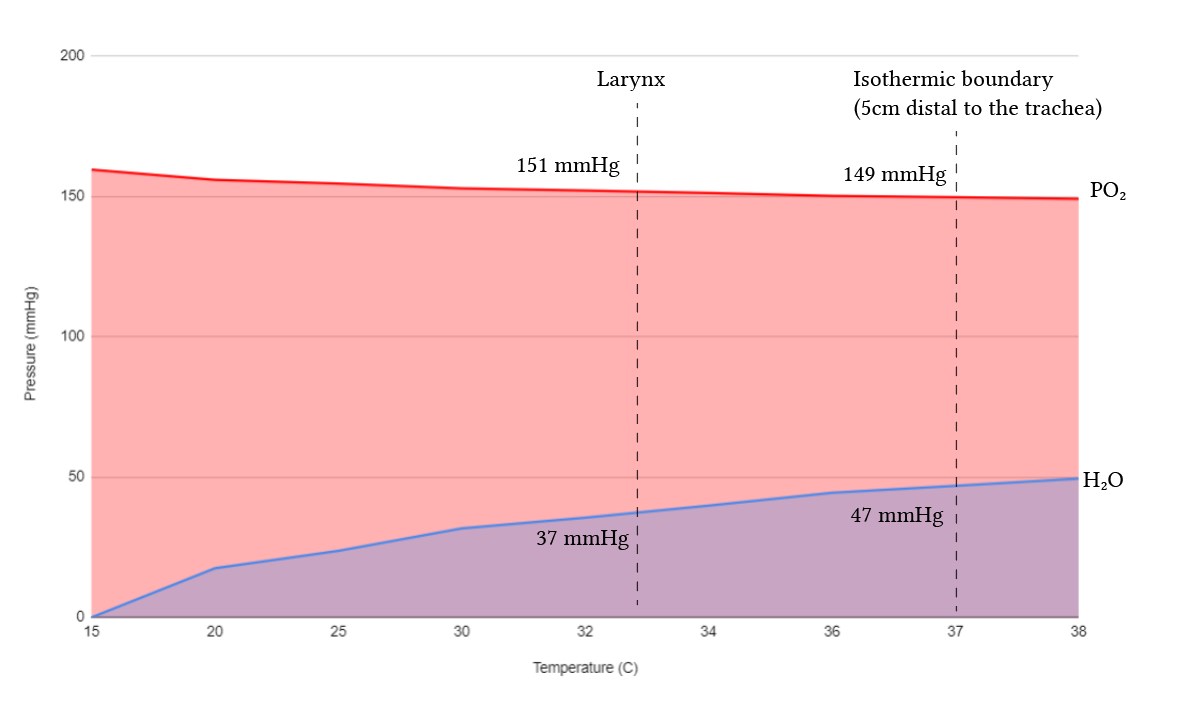 The graph uses a relative humidity of 100% through most of the airway here, which is not entirely accurate, but is close enough for government work. In short, the decrease in oxygen content is relatively modest. The added 47 mmHg of water vapour pressure in the gas mixture decreases the pressure of all the other gases proportionally, and so the oxygen tension only decreases from 159 mmHg to 149 mmHg.

Alveolar gas; dilution by CO2 and absorption of O2

Which ends up being

Thus, the patient with a relatively normal PaCO2 (say, 40 mmHg):

In short, the partial pressure of alveolar oxygen in this scenario is about 99 mmHg. Obviously, this is not going to be the case for every alveolus, as the alveoli which have high V/Q ratios (or those belonging to the alveolar dead space volume) cannot be expected to donate so much CO2 (or any of it) to the gas mixture. It is strange that, given how most of the time the same idealised parameters are chosen (760 mmHg atmospheric pressure, a PaCO2 of  40 mmHg), the textbooks all have a slightly different value for this step in the cascade. In fact, Nunn's, Levitzky and Wests'  offer no specific oxygen cascade values for this step, Chambers give 99.7 mmHg, Brandis offers 100 mmHg and Part One have 105 mmHg.

In addition to CO2 moving into the alveolus, we must remember that oxygen is also removed from the alveolar gas. Apart from moving along a concentration gradient (from alveolar gas to the PaO2 of mixed venous blood, say 50 mmHg) there is also the uptake of oxygen by haemoglobin, which accounts for the majority of this drop. The magnitude of this drop is difficult to estimate for any given lung unit because of the many variables involved. All that can be safely said is that blood entering the lung has an oxygen content of around 97 ml/L (given a Hb of 100), and blood exiting the alveolar capillaries (probably) has an oxygen content of 130ml/L, with the extra oxygen coming from the alveolar gas. Given that there is  0.04464 mmol of oxygen in every 1ml, those 33 ml of oxygen (1.47 mmol) would be expected to exert a partial pressure of about 1.1 mmHg if the total gas mixture had a pressure of 760 mmHg.

Oxygen usually has little difficulty crossing the alveolar-capillary barrier, and therefore the difference between alveolar oxygen and endcapillary oxygen is usually minimal. So much so in fact that in most textbooks this step is omitted, and the shunt equation even assumes that it doesn't exist. That's probably quite a fair position to take, because by the end of the capillary the blood has had enough time (fractions of a second are required) to become maximally oxygenated.

To be sure, in everybody there is an alveolar-arterial PO2 difference, but it is due to other factors. Cohen et al (1971) explored this in healthy young men.  The investigators measured the gross alveolar-arterial difference (about 9%) and then excluded the contribution of V/Q scatter and shunt by integrating test results taken with 100% FiO2.  As one might recall, using an FiO2 of 100% essentially eliminates the contribution of V/Q scatter to the venous admixture, leaving behind only "true" shunt and things like alveolar-capillary diffusion. Cohen et al discovered that with 100% FiO2 these healthy young men had an A-a difference of 0 mmHg, i.e. their entire 9% difference was all due to V/Q scatter and there was no shunt and no diffusion problem whatsoever.

Only with exercise (which increases cardiac output and therefore decreases capillary transit time) did diffusion become an issue. The same young subjects were exposed to some "100 watt exercise" (defined as "bicycling, stationary, light effort" by Wikipedia), during which the authors were able to attribute an A-a difference of about 11 mmHg to diffusion.

After the diffusion step, the next step in the oxygen cascade should probably be the one produced by venous admixture. Under normal circumstances, venous admixture contributes approximately 3% to the difference between alveolar and arterial PO2. This obviously changes in states of disease. Here, a lightly altered diagram stolen directly from Said & Banerjee (1963) demonstrates measured A-a differences in healthy patients as well as patients with broken lungs: 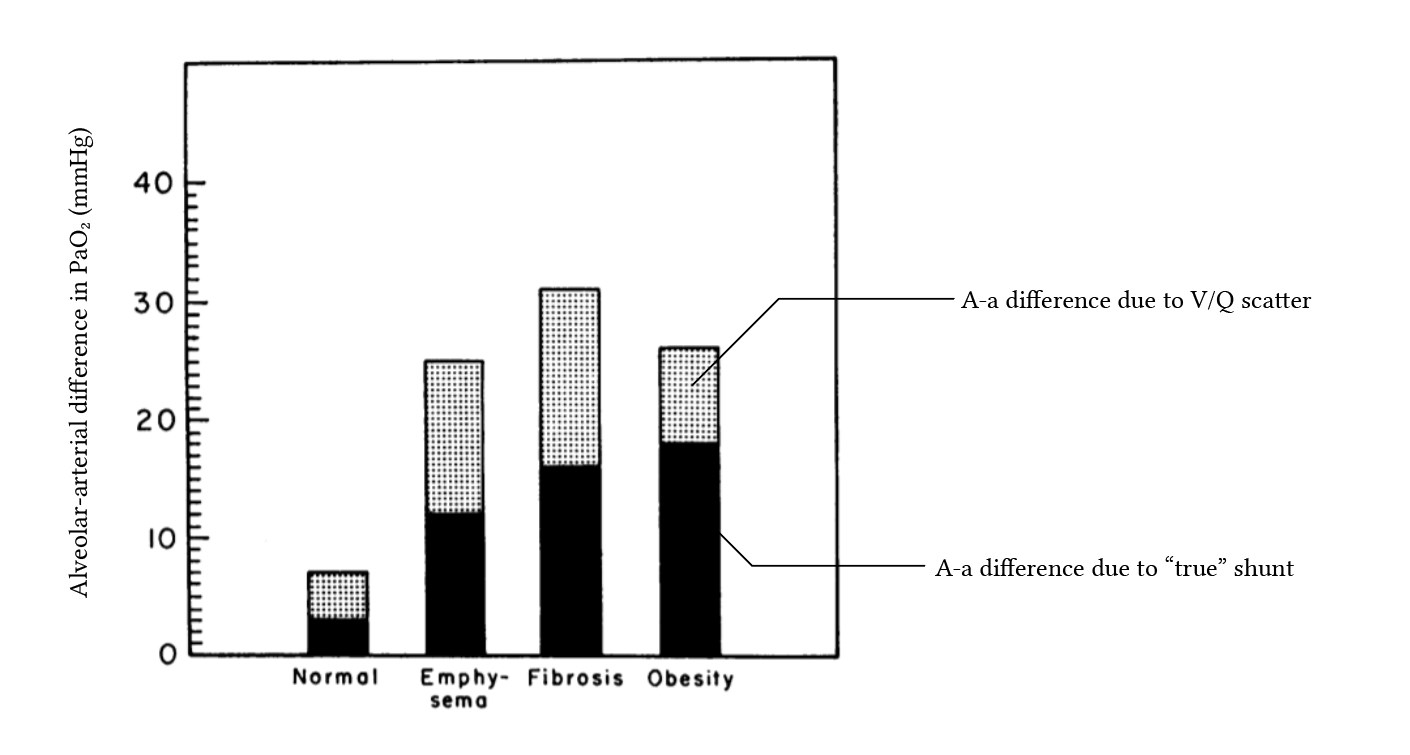 So, if one were using this diagram as a guide, one might be able to say that the systemic arterial PaO2 is 7 mmHg lower than the alveolar oxygen concentration (i.e around 92 mmHg) and that the majority of this difference was probably due to venous admixture from lung units with a V/Q ratio of less than 1.0. Beyond this step, arterial blood rapidly makes its way to the tissues, and it remains essentially unchanged on the way there.

The arterial-alveolar gradient (A-a gradient) should probably be mentioned here, even though it is discussed in greater detail elsewhere. In short, this is the gradient between measured arterial PO2 and the calculated alveolar PO2, determined through the use of the alveolar gas equation. Many generations of intensivists have grown up being forced to calculate this pointless metric, and a CICM trainee can expect for this trauma to be vertically trasmitted for many generations to come. All that needs to be said here is that in the college comments to Question 17 from the first paper of 2015 the examiners expected some mention of the A-a gradient, and its normal values. Without digressing extensively about the numerous possible age-related formulae, one can safely say that average value at 21% FiO2 is 7mmHg in the young, and 14mmHg in the old (Kanber et al, 1968).

Between the arterial blood and the cytoplasm of cells, there is a massive gradient of oxygen content, which drives the diffusion of oxygen into those tissues. An exact number is impossible to give, because all organs and tissues will be different, within each organ there will be regional variation, and even within the same region each cell will be slightly different in its distance from the nearest capillary (which is actually a major determinant). Thus, whatever partial pressure value one chooses to represent this step in the cascade, it will be wrong.

Being unable to recommend any one specific value to use for one's exam answer here, instead the author chose to confuse their reader with an overwhelming excess of values:

This list is from an excellent article by Carreau et al (2018), which has references to support each of the listed values.

The last stop for oxygen is the mitochondria. Obviously, as tissues are different, so cells and mitochondria will be different, and beyond that measuring the actual mitochondrial oxygen concentration is tricky from a practical perspective. Dmitriev & Papkovsky (2012) reviewed some of the difficulties and found that a range of 1-10 mmHg is usually reported in the literature. Generally, textbooks tend to quote low numbers, for example Brandis gives 4-22 mmHg.

In this race to the bottom, how low can you go? Obviously, if you are experiencing cardiac arrest, it is not inconceivable that some of your mitochondria may be down to a PaO2 of 0 mmHg. Obviously, not all is well in those organelles, as aerobic metabolism must cease in the absence of substrate. But how low can oxygen tension get before the mitochondria stop trying to use it?

Most authors who go this far seem to describe some sort of a "Pasteur point", a critical threshold for oxygen tension beyond which aerobic metabolism cannot continue. This threshold appears to be governed by the affinity of the oxidative phosphorylation enzymes for oxygen, which is very high. Most people echo Brandis and give 1 mmHg as the lowest partial pressure of oxygen at which aerobic metabolism can continue.

The term "Pasteur point" is adapted from microbiology, and refers to the oxygen tension which is required for facultative anaerobic organisms to switch their metabolism from anaerobic fermentation to aerobic metabolism. The latter then suppresses the former, a phenomenon which has come to be known as the Pasteur effect (Engelhardt, 1974). Below this oxygen threshold, aerobic metabolism is viewed by these microorganisms as an unviable means of energy production, and is suspended. The 1mmHg partial pressure is also thought to be the critical point at which the oxygen enrichment of the Earth's atmosphere became sufficient to support complex life, at some stage in the deep Pre-Cambrian, perhaps around 600 million years ago (Rhoads & Morse, 1971). It would appear that modern microorganisms also have this built-in threshold, and by extension so do their distant relatives, the mitochondria. For mammalian mitochondria, this limit is probably around 7μmol/L O2, or 0.5 mmHg at normal body temperature. Wilson et al (1988) found that this was the concentration of oxygen required to suppress the respiratory activity of the cytochrome enzymes to half of the maximum.

Carreau, Aude, et al. "Why is the partial oxygen pressure of human tissues a crucial parameter? Small molecules and hypoxia." Journal of cellular and molecular medicine 15.6 (2011): 1239-1253.