Movement of carbon dioxide from the cell to the atmosphere

This chapter is most relevant to Section F7(i) from the 2017 CICM Primary Syllabus, which expects the exam candidates to be able to "describe the movement of carbon dioxide from the cell to the atmosphere" which is conceptually identical to the oxygen cascade.  One assumes that, like for oxygen, the college examiners would expect "an orderly journey" of some sort. Of course, as this has never come up in any exam setting, we will never know exactly what they wanted from this syllabus item, other than it is of an "L1" level of importance ("detailed knowledge and comprehension of the principles and facts", etc)

The steps along the path of CO2 from cells to atmosphere are:

As there is no such thing as a carbon dioxide cascade (or rather, that's the name given to a refrigeration system), there does not appear to be a suitable graphic to steal or replicate.  Nor has anybody published anything specifically on this matter. The Nunn's chapter on carbon dioxide (p.151-167 of the 8th edition) is completely useless for this purpose. Separate resources were required to cobble this information together, which are listed in the references at the end of this chapter, and none of them individually could be recommended to the exam candidates, unless they have infinite time resources. Moreover, a lot of the information seems to be missing, and the gaps had to be filled with unsatisfying speculations.

With these caveats, the reader is reluctantly presented with a "CO2 cascade" of sorts: 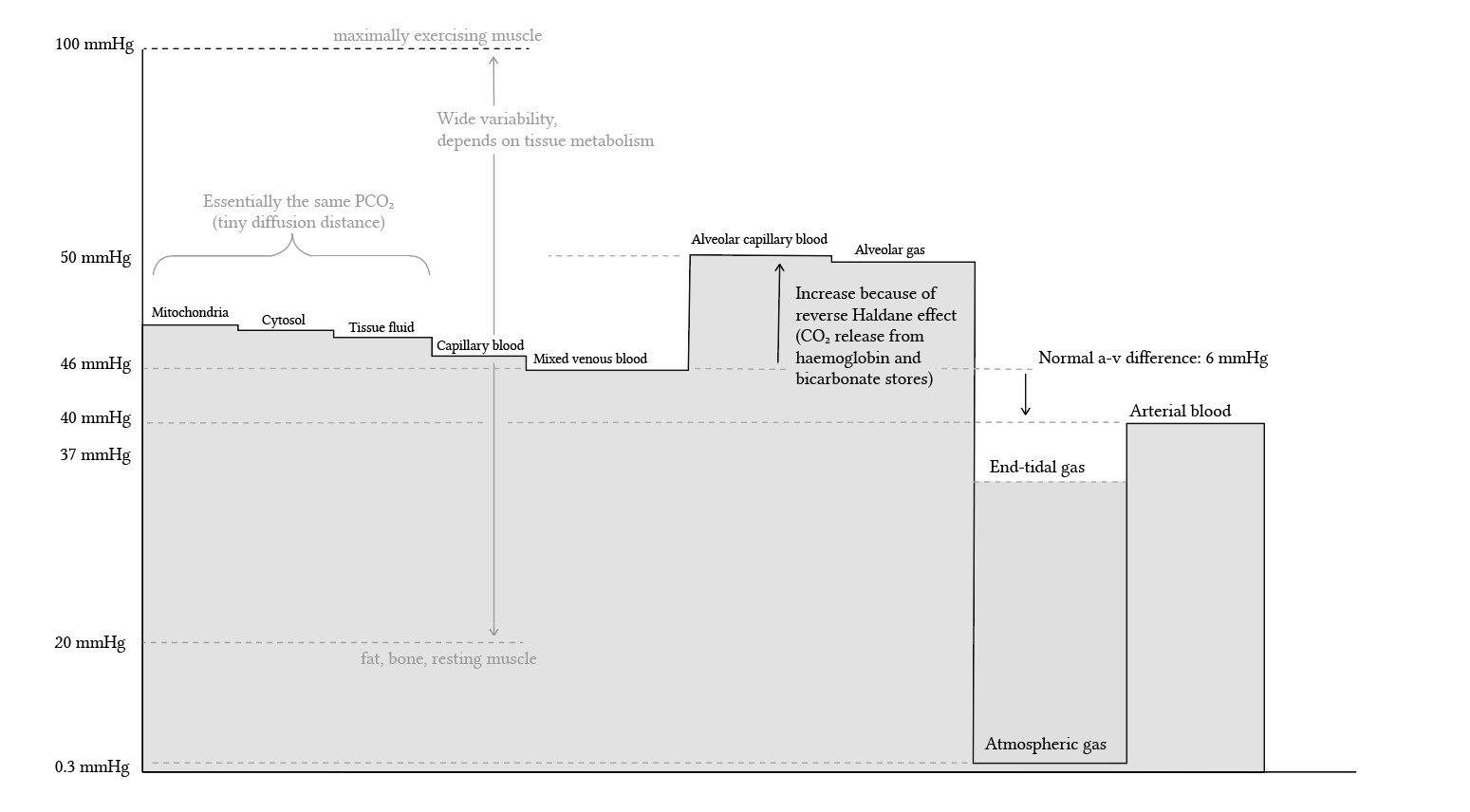 CO2 in the mitochondria and cells

As the oxygen cascade classically ends in the mitochondria, so it seems logical that the "ordered journey" of carbon dioxide should begin there. Any discussion of this topic which seeks to be based in evidence comes up against the very real practical problem, which is that mitochondria are very very small and it is difficult to shove a probe into such a tiny object to measure the PCO2 in there. Moreover, some mitochondria (eg. muscle) will be hardworking and therefore will have a relatively high localised PCO2, whereas other mitochondria will be doing relatively little.  Even with these caveats, nobody seems to give a firm number, and so we must make inferences from other measurements.

However, those inferences are not especially inaccurate.  As one might expect, the mitochondrial membrane diffusion characteristics for CO2 transfer are remarkably fast as compared to other membranes.  This makes logical sense, as mitochondria would be rather anxious for the CO2 to leave, and would want to minimise all barriers to its departure. Conversely, if they were plant mitochondria, they would be trying to facilitate its diffusion into the mitochondria along a laughably small concentration gradient (atmospheric PCO2 is 0.3mmHg), in which case again they would want nothing to stand in its way.

Continuing this defeatist line of thought, essentially the same statement can be made regarding the difference between the cytosol and the tissue fluid which surrounds the cells, because all of those structures and membranes are a) highly permeable to CO2, and b) tiny. However, one would have to make that statement with nothing whatsoever to back it, in terms of experimental evidence. In fact, it is as if the scientific community have conspired to never produce any research on this specific subject. Dear readers, if you ever come across anything to illuminate this murk (or publish an original piece of work on it), you will be richly rewarded by a grateful society.

Anyway. Realistically, the next step in this cascade would have to be the tissue fluids.

CO2 in the tissue fluids

Once it has managed to get out of the cells, CO2 must diffuse towards the nearest available capillary in order to have any hope of escaping the body. This, as one might imagine, will be more difficult in poorly perfused tissues, i.e. those which are either undersupplied with blood flow or with capillaries. In fact, one can separate body tissues into several compartments, classified on the basis of how rapidly CO2 equilibrates with the bloodstream. These would be:

In contrast to a lot of the contents here, there are some data to support this. For example, Campbell (1923) injected air into various cavities (bladders, intestines, under the skin) of rabbits and kittens and then measured the CO2 content of these cavities and how rapidly it changed. He found that " the presence of a large quantity of fat greatly slowed down the rate with which the CO2 tension reached equilibrium".

Another way of looking at this is the rate of CO2 washout following a rapid change.  For example, when one hyperventilates, one's bloodstream will enjoy a rapid decrease in PCO2, and all the tissues will lag in their equilibration, all at different rates. Brandi & Clode (1969) measured the rate of equilibration and determined that there were at least two compartments. The image below is from their original article, modified for clarity: 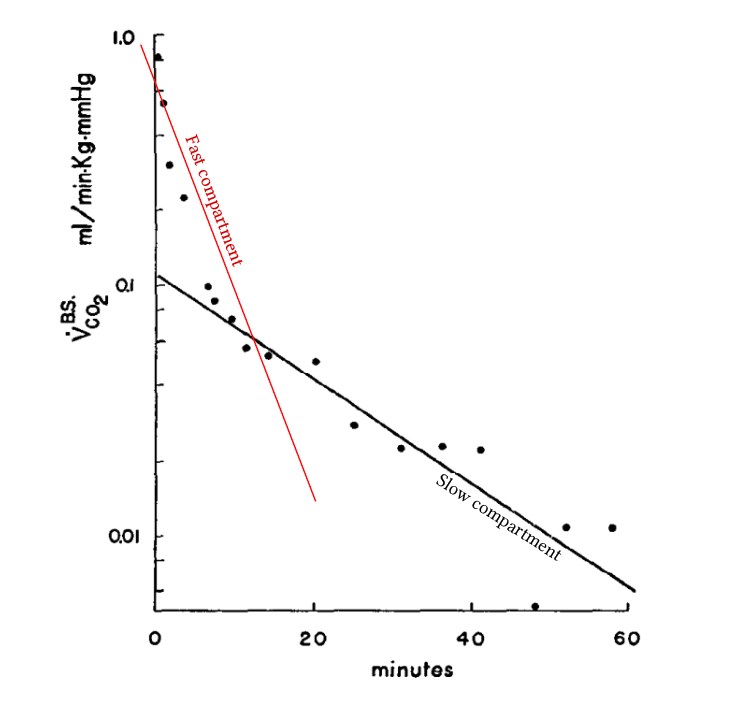 As one can see, the investigators were able to identify a compartment which was rapidly emptied of its CO2 content (that was probably blood, brain and kidneys), and then there was a slow egress of CO2 from some sluggish reservoir (probably bone, fat, etc). These two compartments were also obvious in the data generated by Khambatta & Sullivan (1974). More compartments could surely be added to any such model, and there is no end to it (after all, every cell and every organelle is a compartment).

CO2 in the capillaries

The partial pressure of CO2 in the capillaries is probably quite variable and strongly dependent on the metabolic activity of the tissues surrounding that capillary. For example, Juel et al (1990) convinced ten men to perform "exhaustive dynamic exercise" with the knee extensors of one leg; the venous blood exiting these muscles presumably reflects their capillary CO2 content, which was 47 mmHg at rest but over 100 mmHg after maximal exercise. Similarly, liver tissue is more metabolically active and the PCO2 from liver capillaries tends to read higher (51 mmHg, Van Liew et al, 1962), whereas fat is more idle and the PCO2 measured there is usually lower (41-46 mmHg, same author and paper)

By a similar mechanism, tissues which are poorly perfused will have a higher oxygen extraction ratio, and therefore higher CO2 production (this is the basis of using the arteriovenous CO2 gap as a marker of global perfusion adequacy). Moreover, there is clearly significant regional variation. For example, even within the same resting muscle, because each muscle fibre will have a slightly different relationship between it blood supply, oxygen consumption and CO2 production will be quite different depending on where you sample. As an example, Van Liew et al (1975) sunk some microtonometer probes into the resting leg muscles of rats (eight or so samples per muscle), and got PCO2 readings ranging from 20 to 49 mmHg, clustering around 40 mmHg.

Anyway. The CO2, once diffused into the blood, then undergoes various Haldanian metamorphoses and is transported to the lungs mainly in the form of bicarbonate as well as carbamate and as a small dissolved fraction.

The next step in the cascade is the delivery of the CO2-rich blood from the peripheral circulation into the greater vessels. Here, and in the right ventricle, these venous bloodstreams merge and mix. The homogenised mixture which is delivered to the lung is representative of the whole body, and will therefore be poorer in CO2 than blood coming from highly metabolically active regions, and richer than blood coming from lazy idle tissues. The PCO2 here is said to be about 46 mmHg when conditions are "normal", whatever that is. A more accurate statement would be that on average, mixed venous PCO2 is about 6mmHg higher than whatever the arterial value is (McEvoy et al, 1974)

In the pulmonary capillary, the  Haldane effect is reversed. Oxygenated haemoglobin releases its CO2 content and becomes a relatively ineffective buffer, causing and change in the pH and producing a shift in the bicarbonate-CO2 equilibrium. The net effect of this is an increase in the PCO2 in the pulmonary capillary, over the micrometre distances and fraction-of-a-second transit times of pulmonary capillary blood. The impossibly thin alveolar membrane being no barrier for the diffusion of most gases (let alone for famously soluble CO2), one can confidently say that alveolar PCO2 and pulmonary end-capillary PCO2 are essentially the same. DuBois et al (1952) were able to demonstrate this elegantly; the expired CO2 content of their volunteers was seen to approach the calculated value of oxygenated venous pCO2 (i.e. the CO2 mixed venous blood would be expected to have if it were oxygenated to near 100% SaO2).

The last step for alveolar CO2 is to be exhaled. The atmospheric PCO2 being around 0.3 mmHg (419 ppm in 760 mmHg), and the alveolar being ~50 mmHg,  there is a vast passive gradient to drive diffusion from the pulmonary capillary into fresh alveolar air. Obviously if there was ever something wrong with the atmospheric pCO2, this gradient would diminish and gas exchange would become impaired. During the Lake Nyos disaster, when the lake bed suddenly decided to release about 300,000 tons of CO2, the regional FiCO2 went up to 8-10% (60-70 mmHg, enough to snuff out gas lamps).  All the survivors claimed to have lost consciousness for hours.