Diffusing capacity and its measurement

This chapter is most relevant to Section F7(iv) from the 2017 CICM Primary Syllabus, which expects the exam candidates to be able to "define diffusing capacity and its measurement".  This has come up at least once in the CICM past papers, as an unexpected element of the answer to Question 20 from the first paper of 2012, which presented itself as  "list the physiological factors affecting the diffusion of oxygen across the alveolar membrane". An earnest (albeit longwinded) attempt to explore those factors and fail that question by interpreting it literally can be seen in the chapter on the diffusion of gases through the alveolar membrane. Here, instead, will focus specifically on diffusing capacity, and how it can be determined.

With exercise, both major elements affecting diffusing capacity are altered:

It is difficult to recommend any single article regarding this, as most of them focus on one specific aspect and none seem to offer a brief broad overview of the sort that a time-poor exam candidate may be wishing for. A reasonable source is Hsia (2001). which leans somewhat to the side of exercise-induced change in DLCO, and Ayers et al (1975), which is a solid (though dated) discussion of the different ways the DLCO may be pathologically decreased. As with all things related to pulmonary function testing, the excellent PFTBlog is an excellent resource, particularly with regards to the methods of testing DLCO.

Though it was not explicitly asked for in the question, an unwritten expectation of the examiners in Question 20 from the first paper of 2012 was that the trainees would define diffusing capacity in the course of listing factors which affect the diffusion of respiratory gases. From the college examiners' own comment, the definition for this concept is:

"The diffusing capacity is defined as the  volume of gas that will diffuse through the membrane each minute for a partial pressure difference of 1mmHg."

Nunn's defines it a little differently:

This property is usually referred to as DL or DL, and it is typically measured in gas volume, per unit pressure, per unit time; for example the SI units are mmol/min/kPa, and the traditional units are ml/min/mmHg. In essence, this parameter describes the ease with which gases can find themselves transported into alveolar capillary blood, and is therefore a handy distillation of all the factors which influence the diffusion of respiratory gases into one numerical representation.

For oxygen, the equation is:

The oxygen uptake is sort-of measurable, as it is the difference between mixed venous and arterial oxygen content. However, the PO2 gradient here is the difference between alveolar PO2 and the pulmonary capillary PO2,  of which the latter is basically impossible to ever measure directly. With various assumptions, one can guess as to what the capillary PO2 should be, and perform some back-of-the-envelope calculations.  For some weird reason, the only source which actually lists this value seems to be Gehr et al (1981), which is a book chapter on the comparative respiratory physiology of mammals. There, along with Thompson's gazelle and the dwarf mongoose, one can find the value for humans, which is reported as 2.47 ml/mbar/sec. A more authoritative (but still unreferenced) value reported by conventional notation can be found in ER Weibel's textbook from 1984, who gives 20-30ml/min/mmHg.

As will be demonstrated below these values - measured in resting individuals - do not represent the true maximum of the diffusional capacity of the lung.  This can only be revealed by strenuous exercise, where the delivery of blood to the capillary increases significantly.

Obviously, the gas you're most interested in oxygen, and so it would make some sort of logical sense to measure this gas directly, but in reality, there are several practical barriers. Or at least, there were barriers when the issue of measuring diffusing capacity had first come up. Basically, in order to measure the DLO2, you would need to be able to accurately measure both the oxygen uptake and the partial pressure gradient.  For the gradient, you would need to calculate the alveolar oxygen (easily done), and then to measure the arterial oxygen (as a surrogate of pulmonary end-capillary oxygen). Then, "the tension of O2 and CO2 in the arterial blood have to be measured by the microtonometer technique developed by Riley-a technique which requires considerable practice and dexterity", wrote Dacie in 1957 to whom oxygen-sensing Clark electrodes were not available.  This does not seem like much of an obstacle to the modern-day intensivist who at any given moment has litres of their patient's blood (both venous and arterial) ready for sampling, as well as accurate instruments to measure the gas content thereof. However, historically it was a major problem, and there remains a bit of a reluctance to sample the arterial of the ambulatory outpatient group. One's referrals would quickly dry up after people realise what you're planning to do to them.

Thus, the use of carbon monoxide has been historically much more popular. Marie and August Krogh had first come up with this in 1915:

"It is assumed further that when a small proportion of CO is allowed to pass into the blood, the gas will combine practically instantaneously with the haemoglobin and the CO pressure in the blood can be taken as 0. When therefore a mixture of CO with air is enclosed in the lungs during a certain time and the drop in CO percentage is determined the diffusion through the alveolar wall can be calculated."

In short, one gives a patient some non-lethal and known dose of carbon monoxide to inhale. The patient holds that breath for ten seconds, and then exhales it. As carbon monoxide has nowhere else to go but into erythrocytes, any difference between the inhaled and exhaled amounts of CO must have diffused across the blood-gas barrier and become bound to haemoglobin. Thus, in the equation:

the carbon monoxide uptake is the "missing" difference of inhaled and exhaled CO, and the gradient is assumed to be between the alveolar partial pressure of CO (which is known, because you gave it) and the arterial partial pressure of CO (which is 0 mmHg, because we know that all of it ends up being bound to haemoglobin). Thus, the measurement of DLCO can be carried out non-invasively.

There are three main methods for the measurement of DLCO: the single breath method, the steady state method and the rebreathing method. The single breath method is described in glorious detail by the excellent ERS/ATS standards statement (Cotes et al, 1993), from which the author has liberally "borrowed" some explanatory images. The rebreathing technique is explored in detail here and the steady-state method here.  An indepth knowledge of this subject is not (cannot possibly be) expected of the CICM exam candidates, and so here, it will suffice to summarise it as follows: 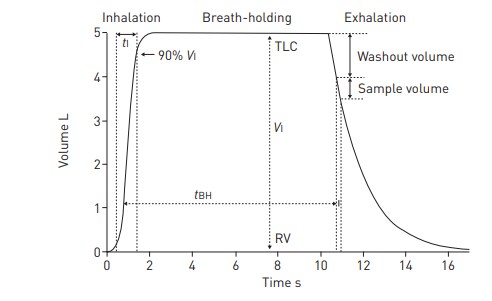 The equation which describes this parameter is quite simple, and the factors which affect it can be divided into gas properties and respiratory system properties. A gas with a higher diffusive capacity will be able to negotiate the blood-gas barrier more easily than a gas with a lower diffusive capacity, at any given pressure gradient. Similarly, the properties of the respiratory system may change in a way which may increase or decrease the diffusive capacity, for the same gas and at the same partial pressure gradient. Of the properties of the respiratory system, three main factors may change: either the surface area changes, or the membrane thickness changes, or the uptake of the gas by red blood cells is somehow altered. One can generate a memorable point-form list to describe these factors, for the purposes of exam preparation. Thus:

If one looks closely enough, one might detect that this list is virtually identical to the list of factors which influence the diffusion of gases across the alveolar membrane, with the notable exception fo the partial pressure gradient (which is incorporated into the definition of diffusive capacity) and the various factors related to measurement error.

Change of diffusing capacity with exercise

Some might say that the discussion of any resting diffusing capacity is a misnomer because it refers to an unstressed system, which in fact has a much higher capacity for diffusion. Indeed, with vigorous exercise, DLO2 increases from 20-30 ml/min/mmHg to something close to 100-120 ml/min/mmHg, which is the "real" capacity for diffusion. This increase is because the oxygen uptake rate in the equation (DLO2 = oxygen uptake / PO2 gradient) increases significantly. It does not take any great stretch of the imagination to explain why this might be. Consider: the minute volume increases, not only because of the increased respiratory rate but also because of the increase in the tidal volume. With increased lung volume, the total alveolar gas exchange area is increased. Moreover, the cardiac output is increased. With that, the delivery of blood to the pulmonary capillaries is increased. This changes the V/Q distribution, as more capillaries are recruited in lung regions which were previously either "true" dead space or had a V/Q  much greater than 1.0. To summarise this in a palatable form:

With exercise, both major elements affecting diffusing capacity are altered:

How much of an increase in DLO2 should we expect? The college answer to Question 20 from the first paper of 2012 addresses this in a cryptic remark, "...alveolar ventilation increases and there is better matching of ventilation and perfusion increases from 21ml/min/mmHg up to  65ml/min/mmHg".
Presumably, the values quoted in the latter half of this obiter dictum are referring to changes in DLCO, and are derived from somewhere reputable, but who knows where that is. One generally expects they come from a textbook, and textbook values usually come from studies performed in the 1960s.  Without knowing specifically which medieval source the examiners had in mind, the search for substantive peer-reviewed references is essentially the same as throwing darts at the literature. For example, a short search turns up a study by Turino et al (1963), whose healthy volunteers got resting DLCO values ranging from 18 to 22, and exercise values ranging from 55 to 64  ml/min/mmHg. This seems approximately correct, and in any case one cannot conceive of a universe where having or not having the exact numbers here would be the deciding factor in one's exam performance.

Ogilvie, C. M., et al. "A standardized breath holding technique for the clinical measurement of the diffusing capacity of the lung for carbon monoxide." The Journal of clinical investigation 36.1 (1957): 1-17.