This chapter is most relevant to Section F7(iii) from the 2017 CICM Primary Syllabus, which expects the exam candidates to be able to "explain perfusion-limited and diffusion-limited transfer of gases".  Why this minor element in the scientific foundation of respiratory physiology merited a syllabus entry, one may never know. Up until Question 15 from the first paper of 2021, it has never appeared in the CICM exams as a question. One can only assume that this is another example of an interfaculty syllabus leak, as this item appears verbatum in the otherwise eerily similar ANZCA primary exam syllabus (2007, section Vb, p.16). Because it was possible that an SAQ on this  subject would one day emerge,  this revision chapter was offered in preparation for that day, and it eventually came. Fortunately, this concept is relatively easily internalised. One may safely limit oneself to becoming familiar with the contents of the grey box below.

In terms of peer-reviewed resources, there is little out there to recommend, in terms of what is freely available. Kobayashi et al (1991) is a reasonable entry, which even attempts to introduce mathematical indices of limitation (Lperf and Ldiff) to indicate "fractional increase of gas transfer that would occur when the pulmonary conductances for perfusion or diffusion were raised to (functionally) infinite values". A heroic attempt to explain this concept with multiple paper cups is also available. If one can get a hold of it, the chapter by Piiper & Scheid  from West's Pulmonary Gas Exchange (Blood-Gas Equilibration in the Lungs, p.131, vol.I) is excellent. 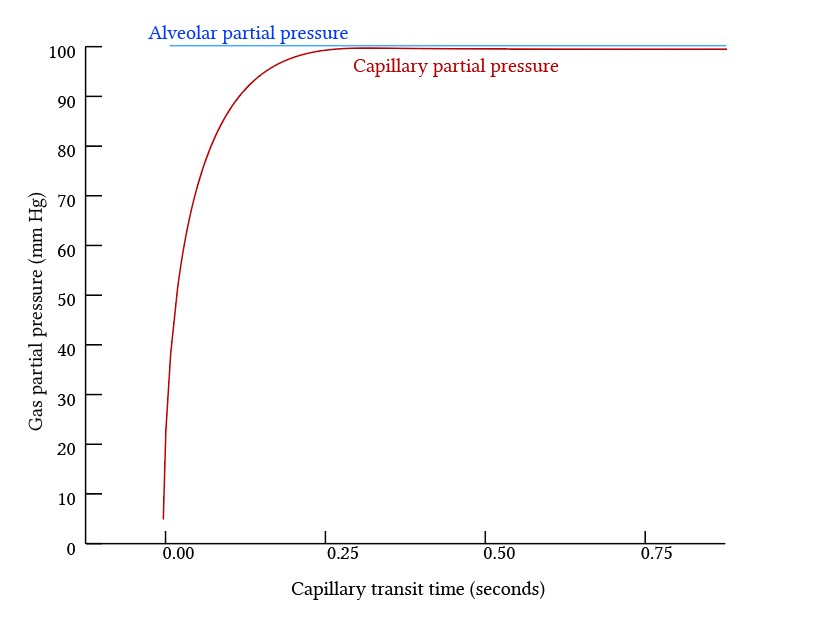 Note the rapid rise of the capillary pressure. Note that it approaches alveolar pressure over a very brief timeframe, and remains there for the majority of the capillary transit time. The diffusion of this gas- it cannot possibly be the limiting factor in its uptake. Ergo, the delivery of fresh blood to this capillary is what really determines the whole-body delivery of this gas. Send more blood into this capillary, and more gas will be removed from the alveolus, until such time that the capillary transit time is significantly shortened.

This scenario describes the behaviour of oxygen faced with a relatively normal blood-gas barrier. Normally, oxygen is a perfusion-limited gas, which allows us to markedly increase the rate of its uptake by varying the pulmonary blood flow. However, in the cases, oxygen exchange can become a diffusion-limited affair. Specifically:

Observe this other gas. 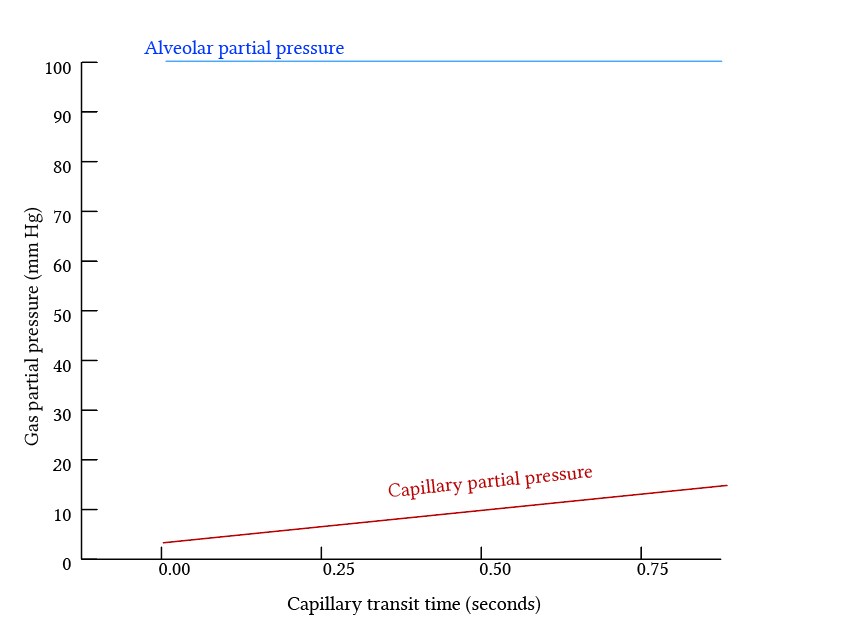 Note that this gas clearly has some trouble crossing from the alveolus to the capillary. Even after 0.75 seconds of capillary transit, there is no equilibration between these compartments. The partial pressure gradient is maintained. Clearly, additional blood flow is not going to improve this situation.

Gas exchange which is both perfusion- and diffusion-limited

To borrow an excellent illustration from Piiper & Scheid (1980), one can illustrate the relative importance of the two different types of gas exchange limitation on different gases and under different circumstances. 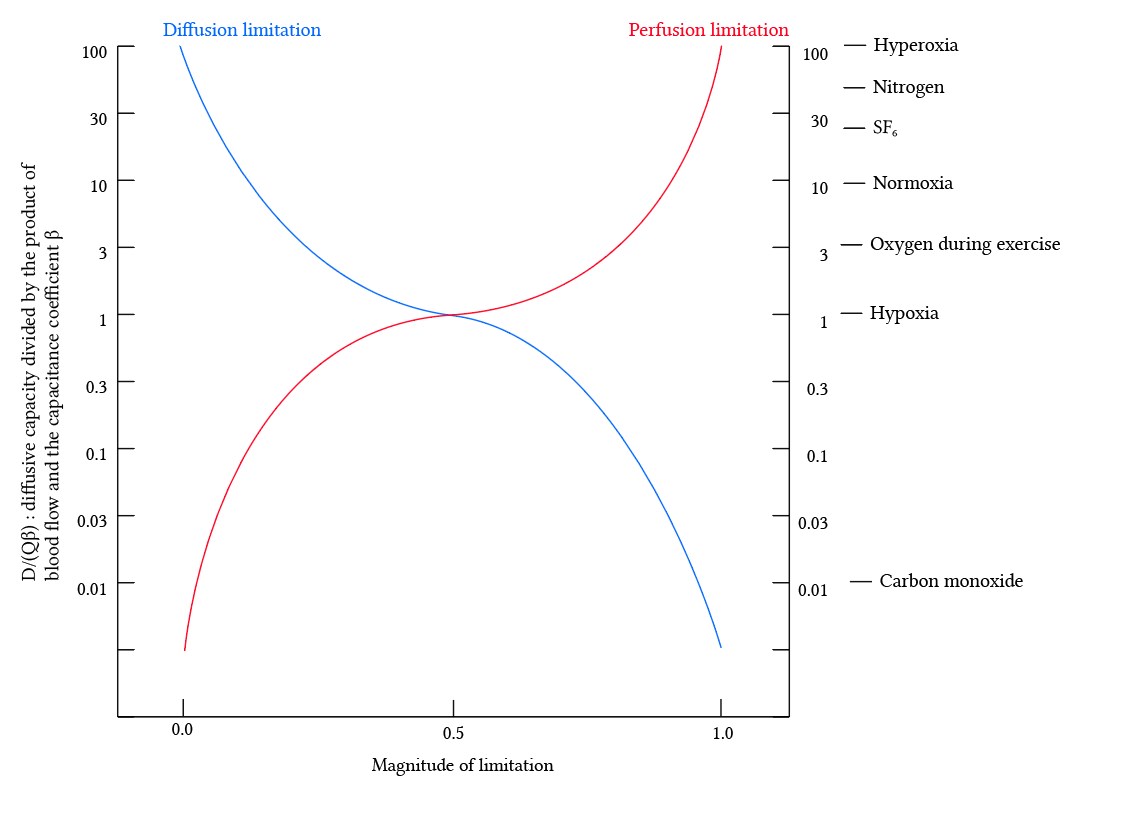 Observe how the curves meet in the centre. Under some circumstances, gas exchange may be limited by both perfusion and diffusion. For example, in the case of extreme exercise during hypoxic conditions (eg. approaching the summit of Everest, dragging a bag of frozen toes behind you), the normally perfusion-limited oxygen exchange becomes diffusion-limited by the low alveolar partial pressure of oxygen as well as by the shortened capillary transit time.

Kanthakumar, Praghalathan, and Vinay Oommen. "A simple model to demonstrate perfusion and diffusion limitation of gases." Advances in physiology education 36.4 (2012): 352-355.