This chapter is most relevant to Section F7(i) from the 2017 CICM Primary Syllabus, which expects the exam candidates to be able to "describe the carriage of oxygen in blood", or it could refer to Section F9(iii) which is "interpret normal and abnormal blood gases". There is probably some utility in knowing about this, as many ABG machines report these variables, and knowing what they mean must have some sort of professional benefit. There is probably no benefit to it in terms of passing exams, as this specific narrow topic is unlikely to ever become the subject of a CICM exam question

In the briefest summary,

The fraction of oxygenated haemoglobin is a parameter which is calculated from values directly measured by absorption spectrophotometry. It is expressed as FO2Hb.

As you can see, oxygen saturation and the fraction of oxygenated haemoglobin are not interchangeable.

Observe this crude diagram, which illustrates the difference between the various measures of haemoglobin oxygen content: 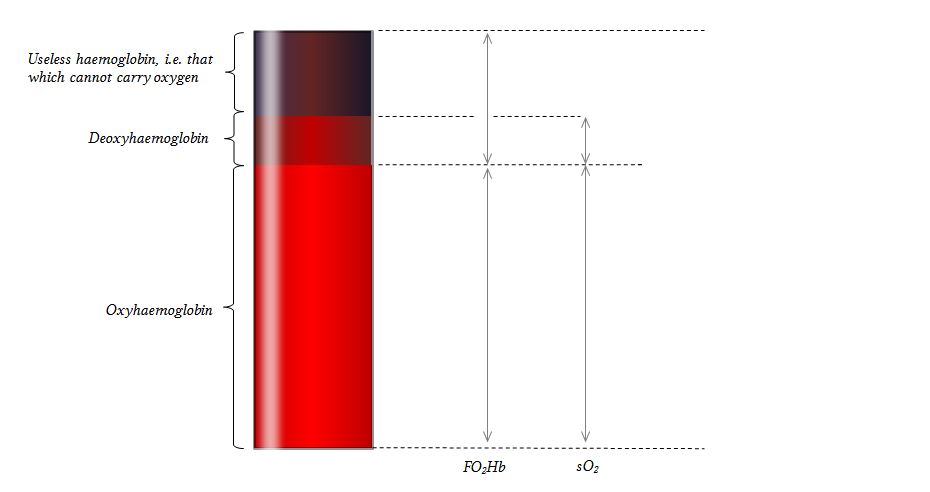 In healthy individuals, the two values will be very similar, as these people typically have little dyshaemoglobin circulating around. However, the sO2 will be consistently a little higher, because everybody has tiny (~1%) fractions of FMetHb and FCOHb.

This has implications for the estimation of the total oxygen-carrying capacity of the blood. In the presence of large concentrations of dyshaemoglobin, the sO2 will remain normal, while the actual oxygen transport will be severely impaired. The FO2Hb will accurately reflect this impairment.

What is the point of measuring this value?

Which is the more trustworthy of the two indices, FO2Hb or sO2?

The answer is that both are useful in different circumstance.

One must remember that the end goal of all these measurements is the determination of the oxygen content of the blood.

However, one would not be able to determine the total oxygen carrying capacity in this way.

For that, the sO2 would be the more relevant measure. The sO2 value excludes haemoglobins which have lack the capacity for oxygen transport (it uses oxyhaemoglobin and deoxyhaemoglobin only).

Lifson, Nathan, et al. "The fate of utilized molecular oxygen and the source of the oxygen of respiratory carbon dioxide, studied with the aid of heavy oxygen."Journal of Biological Chemistry 180.2 (1949): 803-811.