By Alex Yartsev - Jun 08, 2015
Last updated Tue, 12/14/2021 - 16:30
Topic: Respiratory system
All SAQs related to this topic
All vivas related to this topic
This chapter is most relevant to Section F7(i) from the 2017 CICM Primary Syllabus, which expects the exam candidates to be able to "explain the oxyhaemoglobin dissociation curve". In fact this exact phrase has appeared in Question 5 from the second paper of 2015. From the college examiner's remarks it is clear that a drawing of the curve was expected, with "appropriate key
value points (p50, venous and arterial points)". The p50 value, positive cooperativity and the T / R states explaining the curve were all rewarded with extra marks.
In summary:
This is the sigmoidal relationship which describes the changing affinity of haemoglobin for oxygen under a variety of physiological conditions. This chapter tries to explore the fascinating behaviour of haemoglobin, and to discuss it in colourful toddler-like crayon diagrams. Of these diagrams, perhaps the most important is the sigmoidal curve itself, as it is often expected of the exam candidate to discuss its "left shift" and "right shift", a representation of changing the affinity of haemoglobin for oxygen under the influence of various changing physiological parameters. The p50 value as reported by the arterial blood gas analyser represents a mid-point in this curve, and gives us useful information regarding this changing affinity.

A brief history of the oxygen-haemoglobin dissociation curve

The original 1904 article describing the curve, translated for your reading pleasure, is available for free courtesy of the University of Delaware. It was written by Christian Bohr himself (of Bohr Effect fame), with co-authors Karl Albert Hasselbalch (yes, that Hasselbalch) and August Krogh who is best known for Krogh's Principle for the comparative method of biology. It is perhaps under his influence that the investigators chose to use dog and horse blood. Or, perhaps, in the civilized hat-and-coat days of 1904 the idea of harvesting vast quantities of human blood for research was somehow distasteful to these gentlemen of science. Certainly, the blood would have to have been fresh, as at this stage I do not know of any technique available to the investigators which would have kept it liquid for very long.

But let us digress no further. The investigators, armed with an apparatus of their of design, produced a graph of oxygen content of blood at different partial pressures of oxygen and carbon dioxide. This graph is reproduced below entirely unaltered, out of veneration to these founding fathers, and with no permission from anybody whatsoever. One can appreciate from the briefest glimpse that these curves very closely resemble the modern representation of these relationships. Thought the concept of "oxygen saturation" was at this stage undeveloped, the authors did produce a table of their observations, which lists the "oxygen uptake in percent" at various partial pressures of O2 and CO2.

The relationship between haemoglobin saturation and the partial pressure of oxygen was expressed as an equation by J. W. Severinghaus in 1979 (Yes, that Severinghaus). In this paper, Severinghaus used his equation to calculate a table of values for a standard human blood O2 dissociation curve at 37°C and pH 7.40.

One would be surprised as to how difficult this table is to track down online! Everything one gets from Google search results is some bastardised dissociation curve picture with a few "values of interest" thrown over it, or something calculated at 38°C, or worse. In the interest of preserving the intellectual legacy of J.W. Severinghaus, and to make it accessible to the physiology enthusiast, I reproduce his data in the table below.

Armed with Excel, one can plug these values into a graph generator, and arrive at the familiar-looking oxygen-haemoglobin dissociation curve. The advantage of the Severinghaus model is that it has been confirmed experimentally: it fits human blood data to within 0.55% of a saturation percentage point. Furthermore, it is analytically invertible: one can use the equation to calculate a pO2 from an sO2, and vice versa.

Additionally, Dash and Bassingthwaite have published an excellent article in 2010, presenting a set of oxygen-haemoglobin dissociation curves plotted using a mathematical model which they have developed. Their original diagrams can be found here. They have created a Java applet which runs this model, available from www.physiome.org. This way, anyone anywhere can generate any sort of dissociation curve, under any sort of conditions. For instance, after fifteen minutes of fiddling around, I was able to produce a series of curves to reflect four of the major influences on the shape of the dissociation curve: In spite of the convenience of being able to generate a curve for any set of parameters, the diagrams elsewhere in this site are based on the Severinghaus data, and on the Siggaard-Andersen method of calculating the shape of the dissociation curve. The main reason for persisting with the Siggaard-Andersen method is the fact that Radiometer use it in their ABG machines. The other reason is largely historical, rooted in the authors' initial impression that the Dash-Bassingthwaite model produced inaccurate curves.  Earlier revisions of this chapter incorrectly maintained that at 0.0 mmol/L of 2,3-DPG the p50 is supposed to be about 10mmHg, as opposed to the value generated by the model. However, as the result of a fortunate correspondence with one of the co-authors, this issue was corrected. On top of that, a revised version of the model (Dash et al, 2016) is now available and gives valid results even in truly deranged circumstances (for instance, where pH is above 8.5).

Anyway, now that we have an idea what the sigmoid graph looks like, we ask: Why does it curve so?

The concept of positive cooperativity

Haemoglobin is a heterotetramer protein. It is composed of two α-haemoglobin and two β-haemoglobin subunits. Each subunit binds oxygen independently. Then, once an oxygen molecule is bound to it, the oxygenated subunit increases the oxygen affinity of the three remaining subunits. This is positive cooperativity: the subunits "cooperate" to enhance each other's binding of oxygen.

Classically, it has been said that haemoglobin exists in two distinct states: the R state and the T state. The R state ("Relaxed") is the oxygenated form; the T state ("Tense") is the deoxygenated form. The distinction between the two states is a change in structure: one pair of αβ subunits in the oxygenated R-state appears rotated by 15° with respect to the other pair of subunits.

I will use a public domain diagram by Tpirojsi to illustrate this concept. It is discussed in much greater detail, and with excellent visual effects, by David Auble at this University of Virginia biochem lecture site (he in turn uses this excellent article as a reference).

The diagram illustrates the "sequential" model of cooperativity, which suggests that one subunit of haemoglobin starts a sequence of conformational changes in the other subunits haemoglobin which increase their affinity for oxygen, and that this happens in a sequence. The "concerted" model in contrast suggests that haemoglobin cannot exist in a "half-relaxed" state, and that it flips rapidly from one state to another as soon as at least one of the haems in each dimeric subunit is oxygenated.

Apparently, the actual behaviour of haemoglobin molecules is some combination of the two. Both rapid switching and gradual allosteric modulation occur simultaneously. In fact, the deeper we dig, the more hitherto unseen complexity we uncover, with some suggestions that besides the R and T states, many more structural variants may exists, and at the moment it is anybody's guess as to how they play a role in the function of haemoglobin.

Anyway. Though in a totally deoxygenated state it exhibits a certain aloof disinterest in oxygen, haemoglobin becomes more and more interested the more oxygen it binds. The heterotetrameric form of haemoglobin is therefore an ideal molecule for oxygen transport, exhibiting a low oxygen affinity in the hypoxic environment of the capillaries, and a high oxygen affinity in the well-oxygenated pulmonary circulation.

Influence of biochemical and physiological factors on cooperativity

Lots of things can influence the normal cooperativity of haemoglobin subunits. For instance, the presence of an abnormal haem subunit in the tetramer can cause havoc. The presence of a ferric (Fe3+) subunit or of a carboxyhaem subunit can abnormally increase the affinity of the whole molecule. The abnormal haem is locked in its R state and cannot revert to a T state in the presence of hypoxia, impairing the normal unloading of oxygen and causing the curve to shift to the left. In contrast, a sulfhaemoglobin subunit will cause the opposite state effect, and shift the curve to the right.

In the answer to Question 5 from the second paper of 2015, the candidates were expected to sketch the curve with "appropriate key value points (p50, venous and arterial points)". What are these value points? Well. In short, there does not appear to be any strong scientific definition for any of them. Arbitrarily, certain values along the curve were selected by somebody to help discuss the influence of allosteric effectors on the shape of the curve.
Thus: 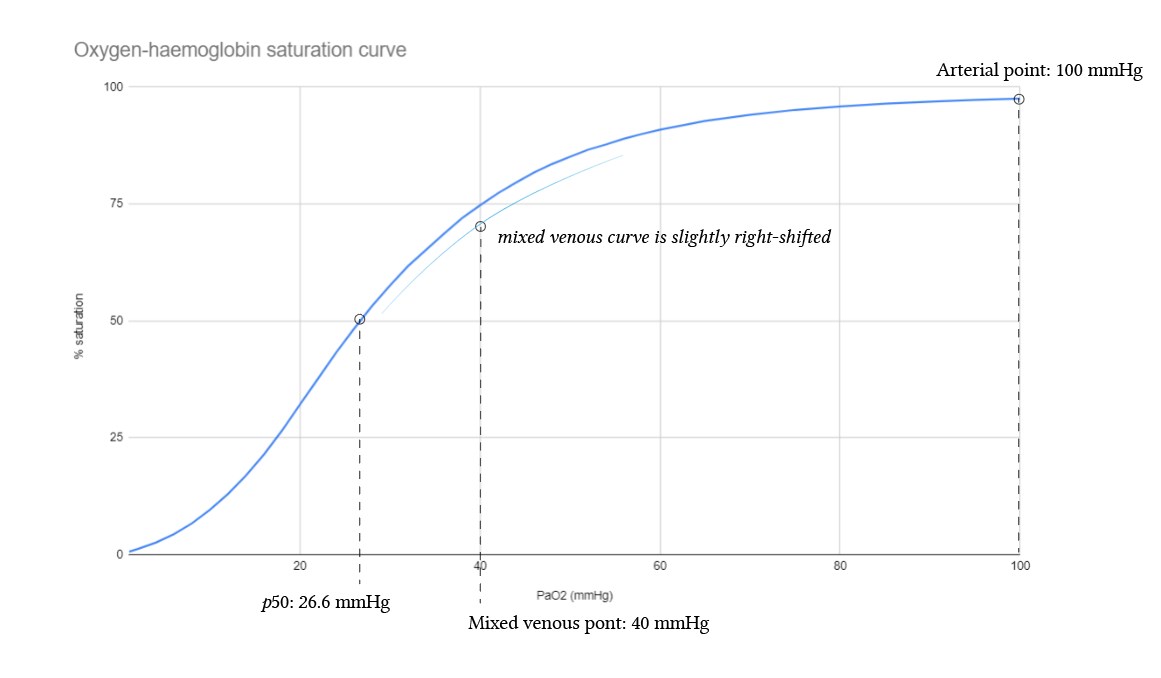 What is the point of these? Difficult to say. Like the p50, the arterial and mixed venous points can be used to discuss shifts of the curve.  Displacement of either point is the consequence of a shift, although none would be as sensitive as p50 because p50 is where the curve is steepest and therefore it is the point which will move the most. However, realistically one could have chosen any arbitrary point in the curve for this purpose. Therefore, for all intents and purposes, the main reason for these points is to help CICM exam candidates draw a neat sigmoid curve.

Mills, Frederick C., and Gary K. Ackers. "Quaternary enhancement in binding of oxygen by human hemoglobin." Proceedings of the National Academy of Sciences 76.1 (1979): 273-277.

OKADA, Yoshiaki, Itiro TYUMA, and Tsuyoshi SUGIMOTO. "EVALUATION OF SEVERINGHAUS'EQUATION AND ITS MODIFICATION FOR 2, 3-DPG." The Japanese journal of physiology 27.2 (1977): 135-144.