Transport of carbon dioxide in the blood

This chapter is most relevant to Section F8(ii) from the 2017 CICM Primary Syllabus, which expects the exam candidates to be able to "describe the carbon dioxide carriage in blood including the Haldane effect and the chloride shift". The college examiners love this topic, and it has come up several times in the First Part papers:

Of the college examiner comments for these questions, none are more helpful than the comments for Question 13 from the first paper of 2015, which offer a clear outline of what was expected.

There is a difference between arterial and venous CO2 content:

The most relevant references for this topic are Chapter 4.5 from "Acid-Base Physiology" by Brandis, as well as this excellent free review article by Geers & Gross (2000). If one is able to do so, one should make every effort to gain access to Klocke (2011), which is unfortunately paywalled, but which is comprehensive beyond reproach better referenced than Nunn's.

There appears to be some disagreement among publications with regards to how much CO2 is transported, and where. For instance, various basic-level review articles (such as Arthurs & Sudhakar, 2005) state authoritatively that "approximately 75% of carbon dioxide is transport (sic) in the red blood cell and 25% in the plasma". In contrast, Geers & Gross (2000,  Table 1) give quite a different set of numbers, almost totally the reverse. Given that the latter article quotes good references and the former does not, the author had gullibly attributed to it a greater credibility and crudely reassembled their borrowed data as a series of coloured cylinders: 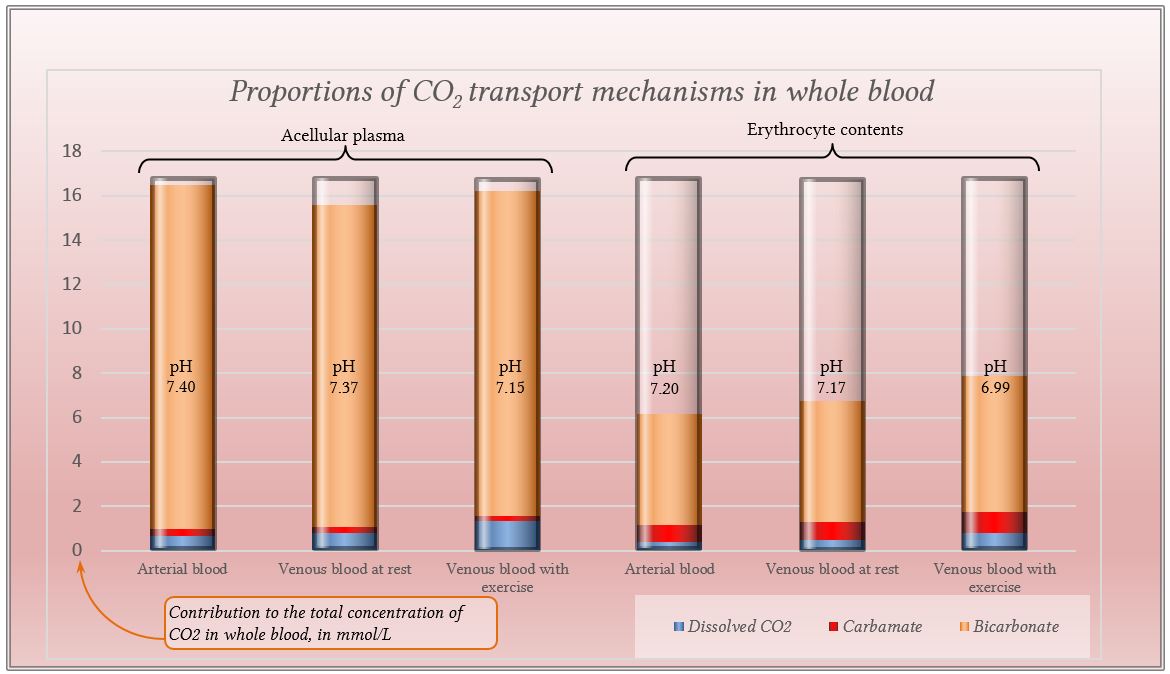 Or, to present it in a slightly different way: 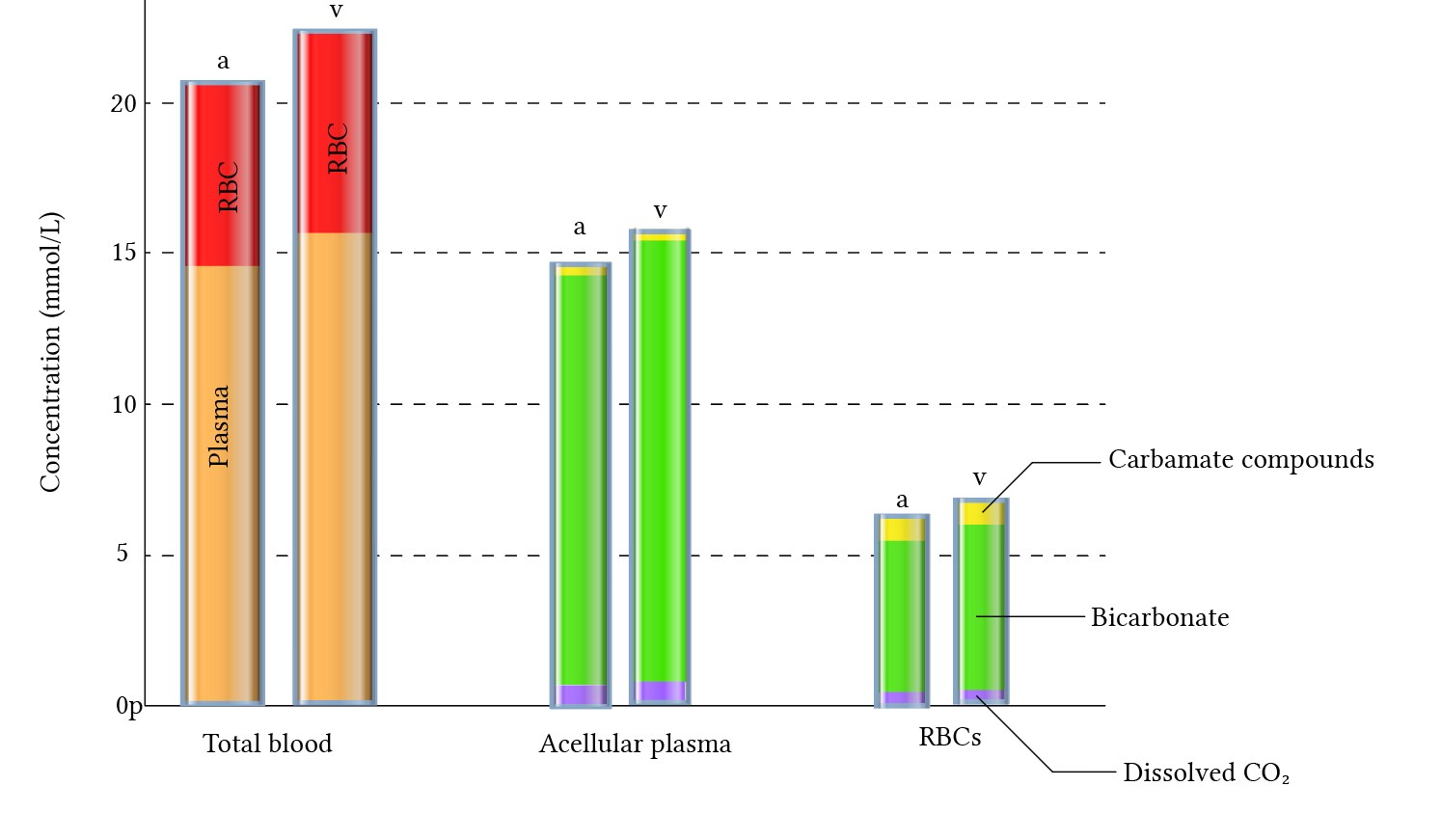 Or, if one prefers actual data:

This is a handy segue into the discussion of the difference between arterial and venous caron dioxide content.

Though this is not explicitly stated in the question stem ("describe the carriage of carbon dioxide (CO2) in the blood") the college examiners expected exam candidates to produce "a table of the contribution of each form of carriage to arterial and venous content and the AV difference" in their answer to Question 5 from the second paper of 2018.

The normal difference between PaCO2 and PvCO2 is usually said to be about 2-6 mmHg (Groeneveld, 1998), but this is a difference of tension rather than of content. Content should really be measured in units of content, for one. Some authors report ml/L, and others mmol/L. The data from Geers & Gross (2000) suggests that this difference is not massive.

Anyway. In the arterial bloodstream, the carbamate CO2-protein complexes and the dissolved CO2 usually account for less than 15% of the total plasma CO2 carriage capacity. The rest is composed of HCO3-. Inside erythrocytes, where the haemoglobin concentration is around 330g/L, the amount of carbamate compounds is greatest, but bicarbonate remains the major player. As exercise increases the amount of CO2 produced by the tissues, the proportion of dissolved CO2 gas in both plasma and erythrocytes increases (triples!) but this increase in dissolved gas has a minor effect on the total blood CO2 content.

In short, in human whole blood CO2 is transported mainly by being converted into bicarbonate. An even more effective way to represent this can be borrowed from Nunn's Respiratory Physiology. In Chapter 10 of the 8th edition (which is all about carbon dioxide transport) a diagram exists which illustrates the change in CO2 transport as plotted against CO2 partial pressure. It is also probably the diagram asked for in the college comments for Question 13 from the first paper of 2015, where the examiners mentioned that "a diagram of pCO2 v CO2 content was helpful".  It closely resembles this:

This is in fact the CO2 dissociation curve, similar to to the oxygen-haemoglobin dissociation curve but distinct because unlike oxygen, CO2 is transported in three different ways. As one can plainly see, with increasing pCO2 the bicarbonate concentration changes the most, the dissolved CO2 increases modestly in a linear fashion, and the carbamate content barely changes at all.

CO2 transport as a dissolved gas

CO2 happens to be one of the gases which enjoy a relatively good water solubility. For every 1 mmHg of CO2 about 0.03 mmol/L enters solution. This relationship is reasonably linear over a survivable range of pressures and temperatures.

In solution, CO2 will reversibly combine with water to form carbonic acid, but it does so with great reluctance. One can describe this reluctance mathematically, and express it as a hydration equilibrium constant (Henry's constant). This constant is derived by dividing the concentration of H2CO3 by the concentration of aqueous CO2. Thus, at 25°C Henry's constant for CO2 is only around 1.7 x10-3, which means that in any given jar of water, the majority of dissolved CO2 remains as a dissolved gas, and only a tiny fraction (0.17%) is present as H2CO3.

Anyway. The total dissolved CO2 content of blood can be calculated from the abovestated relationship ( 0.03mmol/L/mmHg); it is therefore 1.2mmol/L.

Conversion of CO2 to carbonic acid and bicarbonate

The combination of CO2 and H2O leads to the formation of H2CO3 by an entirely spontaneous uncatalysed manner. CO2 acts as a Lewis acid in this setting; having no protons to donate it instead acts as "something capable of forming a covalent bond with an electron pair".

The spontaneous reaction with water is actually rather sluggish. For clinically significant amounts of CO2 the uncatalysed dissociation reaction CO2 + H2O ⇌ H2CO3 can take about 3-4 seconds to half-equilibrate, and up to a minute to reach complete equilibrium (and that is in the steamy reaction-supporting body temperature, 37°C). Obviously that is far too slow. There would not be enough time for this reaction to run to equilibrium during the rapid transit of red cells through the gas exchanging pulmonary capillaries, and CO2 removal would not occur.

Fortunately, the insides of erythrocytes (as well as the walls of blood vessles) are packed full of carbonic anhydrase (specifically CA type II) , which is perhaps the most rapidly acting enzyme in the human body, and with the aid of which this reaction progresses 25,000 times faster, reaching 95% completion within 2 milliseconds. In the macro-scales of ventilation, measured in seconds and minutes, this reaction can be viewed as essentially instantaneous. Because of this sort of catalytic support, the conversion of HCO3- and H+ back into CO2 and H2O can occur in the pulmonary capillaries during the very brief pulmonary capillary transit time.

In fact, so efficient is carbonic anhydrase, that relatively few enzyme molecules are required to sustain a completely normal level of CO2 exchange. It would appear that one requires perhaps as little as 2% of unblocked enzyme to carry on. Consider that this enzyme system is routinely blocked for therapeutic reasons by drugs such as acetazolamide. Indeed, massive overdoses of carbonic anhydrase inhibitors have been surprisingly survivable, in spite of the severe metabolic acidosis which occasionally ensues.

Carbamate compounds are the dissociated conjugate bases of carbamino acids, which form in the spontaneous reaction of R-NH2 and CO2.

Thus, a "carbamate" is a conjugate base which acts as a storage device for CO2, and may contribute up to 14% of the total CO2 carrying capacity of the blood. The transitional "carbamino" stage depicted above is - like carbonic acid- a figure of speech rather than a proper macroscopic member of the bloodstream. At physiological pH it dissociates into carbamate and H+ so fast and so completely that its concentration is negligible, and for all intents and purposes it can be

The carbamate content of the plasma is rather poor because serum proteins (eg. globulins) have little interest in transporting CO2, and tend to form carbamates with the greatest reluctance. CO2 can really only bind to side chains of lysine and arginine, and any random plasma protein may only have one of these side chains exposed and available for CO2 binding. More binding sites are available within the red blood cells, where haemoglobin (especially deoxyhaemoglobin) is available in a high concentration.

This paucity of binding sites might make one think that carbamates don't play much of a role in the transport of CO2 in general, and specifically its transport in plasma. Indeed, the carbamates contribute relatively little to the overall CO2 carrying capacity of the human blood. Their importance becomes much greater if for whatever reason most of your carbonic anhydrase is disabled. In that case, suddenly this forgotten transport system becomes very relevant, as it can work with raw CO2and does not require H2CO3 as an intermediate. Moreover, the carbamate system makes the greatest contribution to the difference between arterial and venous CO2 concentration, mainly because of the Haldane effect which is discussed elsewhere.

Factors which influence the CO2 carrying capacity of proteins

CO2 transport as carbamates is influenced by the following factors:

Inside the red cells, CO2 binds readily to amino acid side-chains of the haemoglobin molecule, particularly when it is deoxygenated. Indeed deoxyhaemoglobin has about 3.5 times the affinity for CO2 when compared to oxyhaemoglobin; this hypoxia-induced increase in CO2 carrying capacity is called the Haldane effect. This is exactly what you want in exercising tissue, which has just consumed all the oxygen in its local blood volume, and has produced a vast amount of CO2. Thus, the carbamate content of venous blood could potentially (at an SvO2 of 0%) be about triple the carbamate content of arterial blood. Of course in reality, the a-v difference is never that great, because venous blood is never that hypoxic.

The presence of carbamate groups in critical regions of the haemoglobin molecule tends to stabilise the deoxygenated form, which decreases the affinity of haemoglobin-oxygen binding. This effect (the Bohr effect) is discussed in greater detail together with the other factors which affect the affinity of haemoglobin for oxygen. Suffice to say the presence of a large amount of CO2 decreases this affinity and promotes the release of more oxygen from haemoglobin, which again is precisely what is needed in exercising tissue.

Schwartz, William B., Newton C. Brackett Jr, and Jordan J. Cohen. "The response of extracellular hydrogen ion concentration to graded degrees of chronic hypercapnia: the physiologic limits of the defense of pH." Journal of Clinical Investigation 44.2 (1965): 291.

Goldstein, Marc B., F. John Gennari, and William B. Schwartz. "The influence of graded degrees of chronic hypercapnia on the acute carbon dioxide titration curve." Journal of Clinical Investigation 50.1 (1971): 208.

Harned, Herbert S., and Raymond Davis Jr. "The ionization constant of carbonic acid in water and the solubility of carbon dioxide in water and aqueous salt solutions from 0 to 50." Journal of the American Chemical Society 65.10 (1943): 2030-2037.