This chapter is most relevant to Section F8(iv) from the 2017 CICM Primary Syllabus, which expects the exam candidates to be able to "explain the carbon dioxide dissociation curve". Though this has not appeared in any past papers, it is regarded as a staple of the ANZCA primary exams, and is therefore likely to appear in the CICM First Part at some stage.

The CO2 dissociation curve describes the change in the total CO2 content of blood which occurs with changing partial pressure of CO2.

There are two main points of interest along this curve:

The physiological CO2 dissociation curve is a line which connects the venous and arterial points, and represents the normal physiological progression of blood on the way through the circulation

The carbon dioxide dissociation curve and its various iterations are encountered in the chapter on transport of carbon dioxide in the blood and the Haldane Effect, but one does not dwell on it in those instances because those sections have their own priorities. The main point of this chapter is to arm the exam candidates with enough of the basics that, when they are confronted with a viva question on this subject in some darkest timeline, they will confidently sketch the curve and hold forth on its properties like it's nothing.

This is a graphical repesentation of the CO2 content of whole blood, plotted against PCO2. By some bizarre convention, everybody (Brandis, Part One, Nunn's) graph the content in ml/dL, which is completely different to the way we measure it in virtually every other situation (this may be another weird feature of local culture, but in Australia everything seems to be in ml/L).

If one were so inclined, one could easily reproduce the simple version of this curve using an equation. This specific empiric fudge comes from a letter to the editor written by Felix Meade in 1972 ("Sir—some of your reader will be using computers to facilitate the processing of physiological data and will have experienced inconvenience and limitation due to lack of a suitable mathematical expression for the carbon dioxide dissociation curve"). Meade fit the formula to empiric data collected by others, and presented comparison tables which demonstrate its validity over a range of 10-80 mmHg. And yes, the content of whole blood is in ml/L. The author is please to report that he was spared any inconvenience and limitation in using a computer (Google Sheets) to facilitate the processing of this physiological data: 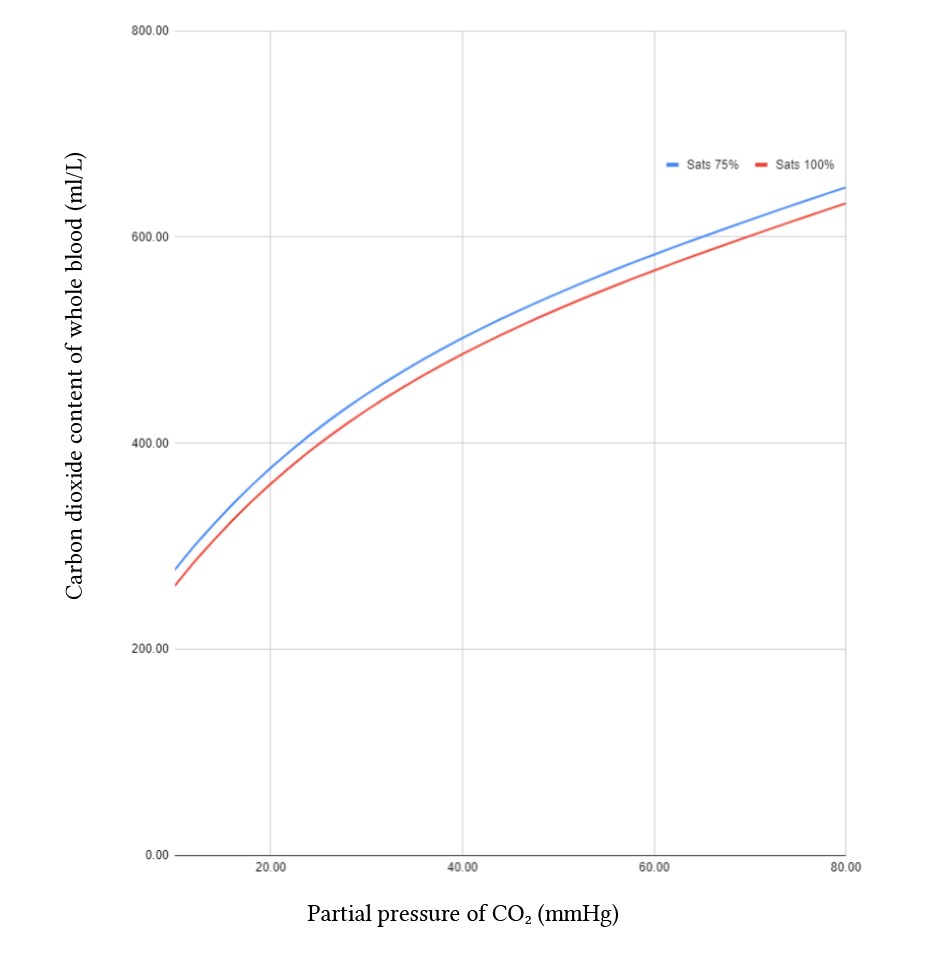 This, in fact, is just a plain version of what you'd have already seen when reading about the different forms of CO2 transport in the blood, as this diagram (below) appears in legitimate publications as well as here: 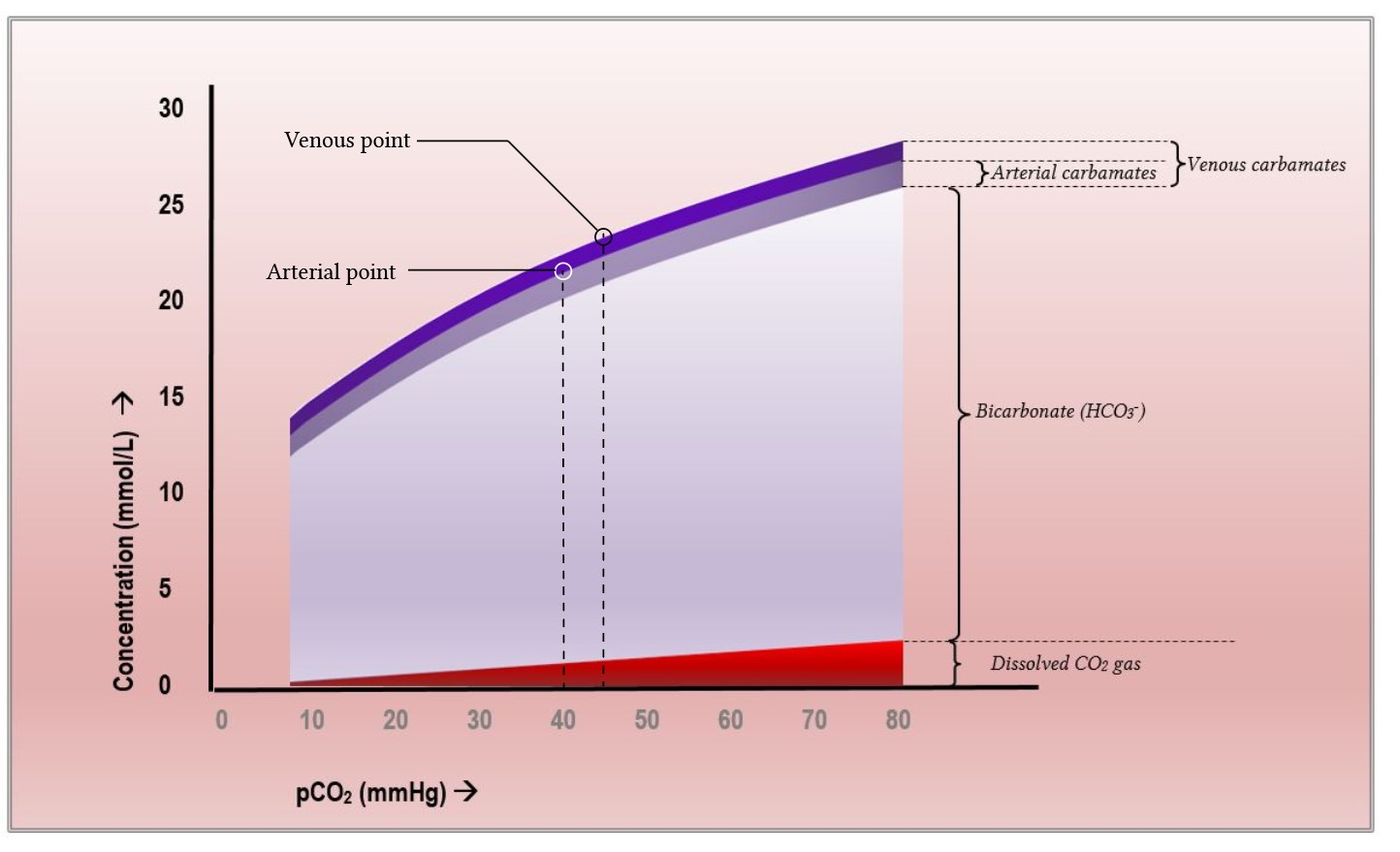 From the perspective of scoring points and passing exams, it is of course not essential to plot the graph from a PCO2 of 10 to a PCO2 of 80 mmHg, as all the money is really in the 40-46 range: 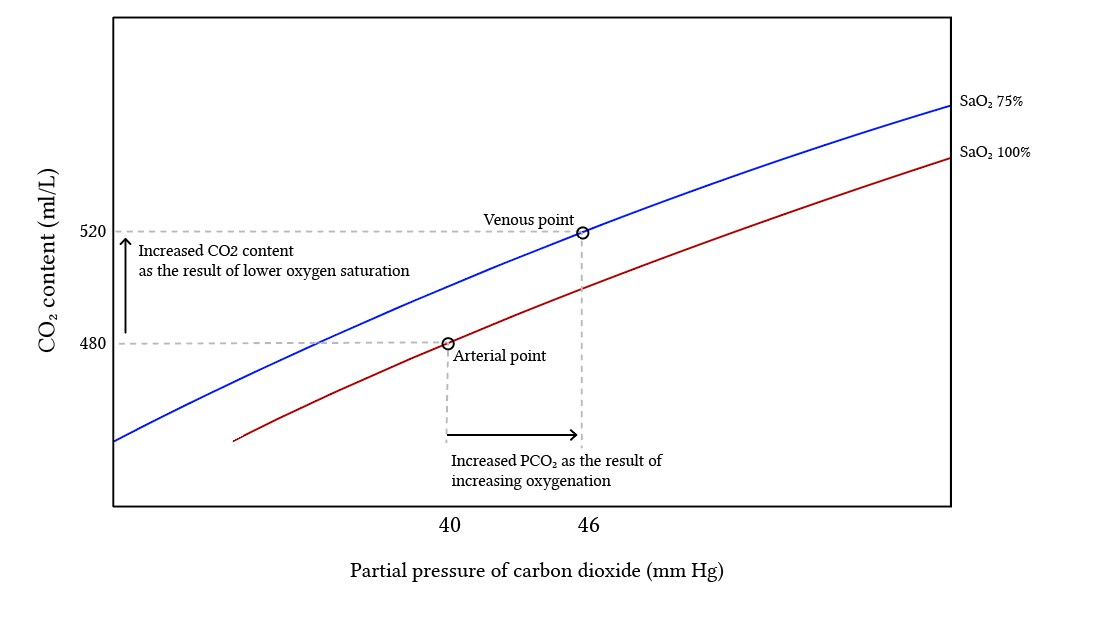 There are important elements here which one needs to mention:

The mixed venous point and the arterial point are viewed as the most relevant points of interest, but theoretically one could also include a curve with  SpO2=0%. That is how it was originally presented when the phenomenon was first reported in 1914 by Christiansen Douglas and Haldane. The authors has plotted both the 100% and the 0% curves over a broad range of carbon dioxide partial pressures. This is the graph from their original article: 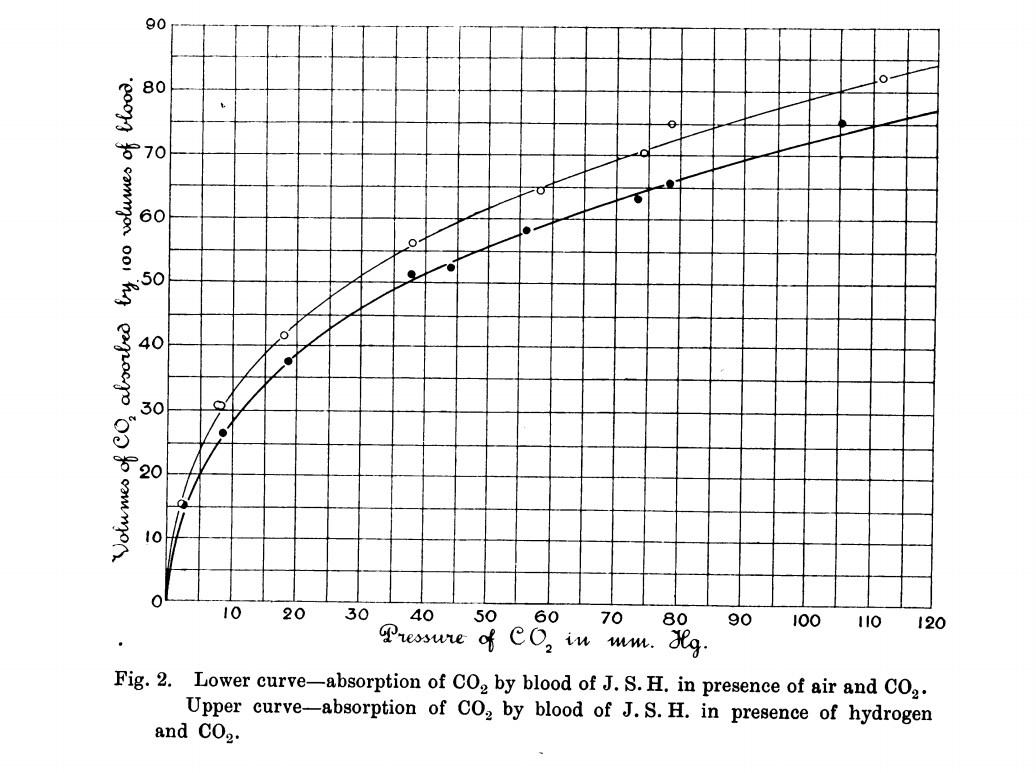 Note how, in a classic Haldane move, the authors drained hundreds of samples from Haldane himself to provide the experiments with enough blood (3-4ml at a time).

Occasionally, in textbooks the arterial and venous points are joined by a line. It might not be immediately clear as to what the point of this is, but with a little digging one can find that the resulting relationship is occasionally referred to as the "physiological CO2 dissociation curve". 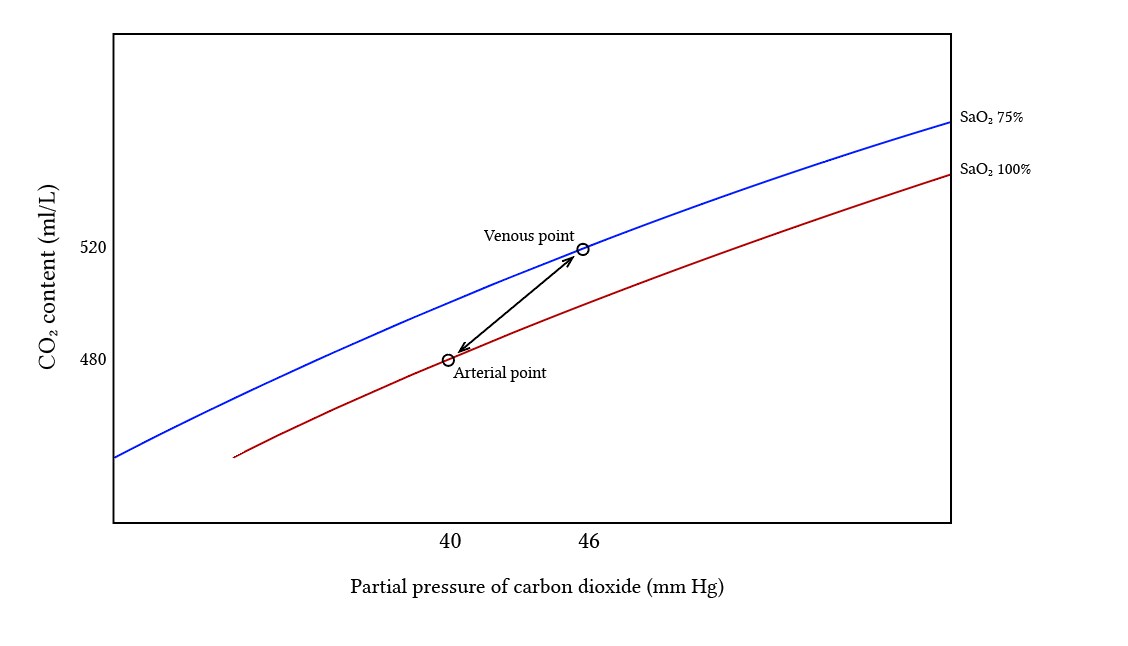 This curve describes what happens to the CO2 content of blood during its natural physiological progression from the venous state to the arterial state, and then back again.

A comparison of oxygen and carbon dioxide dissociation curves

Both gases have dissociation curves, and so it probably makes sense to compare them on the same coordinate field: 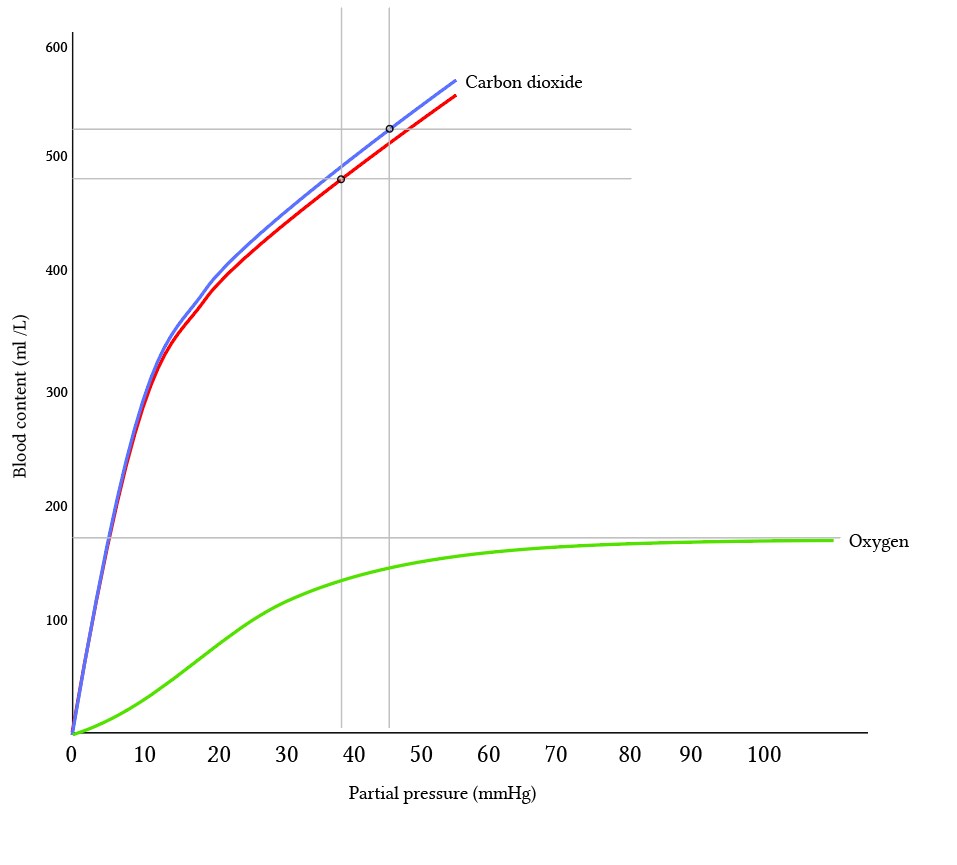 What is the point of doing this? As one can plainly see, the CO2 dissociation curve is more linear and much steeper:

What are the implications of this? Well. The sigmoid shape (specifically, the plateau) of the oxygen-haemoglobin dissociation curve gives rise to a phenomenon whereby it is impossible to compensate for a shunt. As blood travelling through well-ventilated regions of the lung is already maximally oxygenated (i.e. lays along on the plateau), there is no way you can get any better oxygenation by increasing ventilation. In contrast, because the CO2 dissociation relationship is more linear, increasing ventilation of the already well-ventilated regions will still continue to improve the CO2 clearance from those regions, and increasing the minute ventilation can compensate for even very large shunt (up to 50%, apparently).