This chapter is most relevant to Section F8(ii) from the 2017 CICM Primary Syllabus, which expects the exam candidates to be able to "describe the carbon dioxide carriage in blood including ...the chloride shift".

Westen & Prange (2003) give a reasonable overview of the situation, but their article is paywalled. So is the excellent paper by Klocke (1988) which basically goes through all the steps in the chloride shift process in excellent detail. Surely if you are going to be throwing money around you may as well buy the official exam textbook. Unfortunately, Hartog Jacob Hamburger's original paper on "Anionenwanderungen in Serum und Blut" is not available, but perhaps that is for our own good.

Definition of the chloride shift:

There is probably something more official out there, but most authors give a description which is so close to the one above that it would be meaningless to repeat them all. In short, if this ever comes up in a viva of some sort, so long as one uses the words "chloride" and "erythrocytes" in the same sentence, one should be close to half marks already. The most important points are:

Mechanism of the chloride shift

The molecular mechanisms for the chloride shift are described in detail below. In summary, this phenomenon is only possible because of the presence of carbonic anhydrase in RBCs. It is seen as a critically important element (as it is concentrated there, but essentially absent from the bloodstream otherwise). Without it, the reaction converting CO2 to HCO3- would be painfully slow. With massive amounts of erythcyte carbonic anhydrase, we can instead count on these molecular transactions to be complete in the space of one circulatory time. In fact, because all the required proteins are available in massive concentrations, the reaction is incredibly fast. Wieth & Brahm (1980) had determined that 99% of the chloride shift process is complete within about 700 milliseconds. This whole thing could probably be represented better with some cartoony pictures. 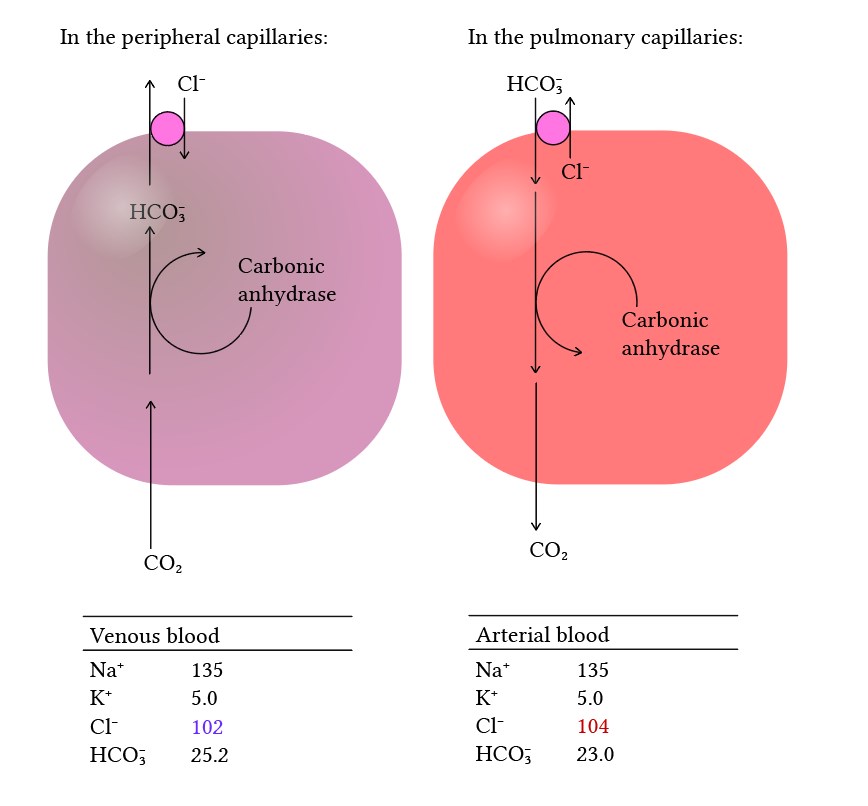 Yes, those potato-looking things are erythrocytes. The numbers came from Western & Prange (2003), whose experiments are discussed below.

Magnitude of the chloride shift

With all this talk of shifting, how much chloride actually shifts? This effect is not exactly seismic. For instance, after determining what electrolyte movements should occur using quantitative physicochemical analysis, Western & Prange (2003) drained blood from healthy volunteers and subjected it to "venous-ification" by exposure to a hypoxic and hypercapnic atmosphere. At a simulated venous gas concentration, the average chloride shift of the samples was approximately 2.4 mmol/L. With a higher haematocrit, closer to 0.55 (they cheated by centrifuge but there really are people out there with such haematocrit values) the investigators were able to measure a chloride shift of around 4.3 mmol/L.

Significance of the chloride shift:

Why is this phenomenon important? Well:

Westen, Edward A., and Henry D. Prange. "A reexamination of the mechanisms underlying the arteriovenous chloride shift." Physiological and Biochemical Zoology 76.5 (2003): 603-614.