This chapter is probably at least somewhat related to Section F8(vii) from the 2017 CICM Primary Syllabus, which expects the exam candidates to be able to "describe physiology and consequences of abnormal haemoglobin". Myoglobin is not abnormal, nor is it a haemoglobin, which makes the relationship between this chapter and the CICM First Part Syllabus ever more tenuous. Unfortunately, the savagery of the examiners knows no boundaries and esoterica occasionally appears in the written papers. For example, Question 18 from the second paper of 2014 asked the candidates to compare myoglobin and haemoglobin in a way which clearly called for discussion of synthesis and degradation to earn full marks. The pass rate was 23%.

A good article by the Wittenbergs (2003) is probably more than enough, considering the level of priority one might assign to this topic.

This globin protein is a relatively small member of the intracellular milieu (17.6 kDa, only 154 amino acids). In skeletal muscle and myocardium, it forms something like 25mg/g of dry weight (Jannson & Sylven, 1983), and slightly less in the myocardium (presumably because it is well supplied with actual haemoglobin). It is synthesised locally, by muscle polysomes (and its synthesis is thought to be stimulated by hypoxia). Degradation of myoglobin is also local, and it appears that under normal conditions only about 0.3mg of myoglobin is released from healthy muscle each day (Hällgren et al, 1978). When it is abundant  (eg in rhabdomyolysis), circulating myoglobin is rapidly removed from the bloodstream, probably in the same way as haemoglobin is degraded in the liver and spleen (Wakabayashi, et al, 1994).

Myoglobin  is monomeric, and has a single oxygen-binding site, which gives it a hyperbolic oxygen dissociation curve (as there are no positive cooperativity shenanigans, there is nothing to give this curve a sigmoid shape). The following curves are "borrowed" from a paper by Schenkman et al (1997), where several saturation curves of myoglobin at different temperatures are displayed. Apart from that, they are calculated for a pH of 7.0, which likely represents the intracellular norms. 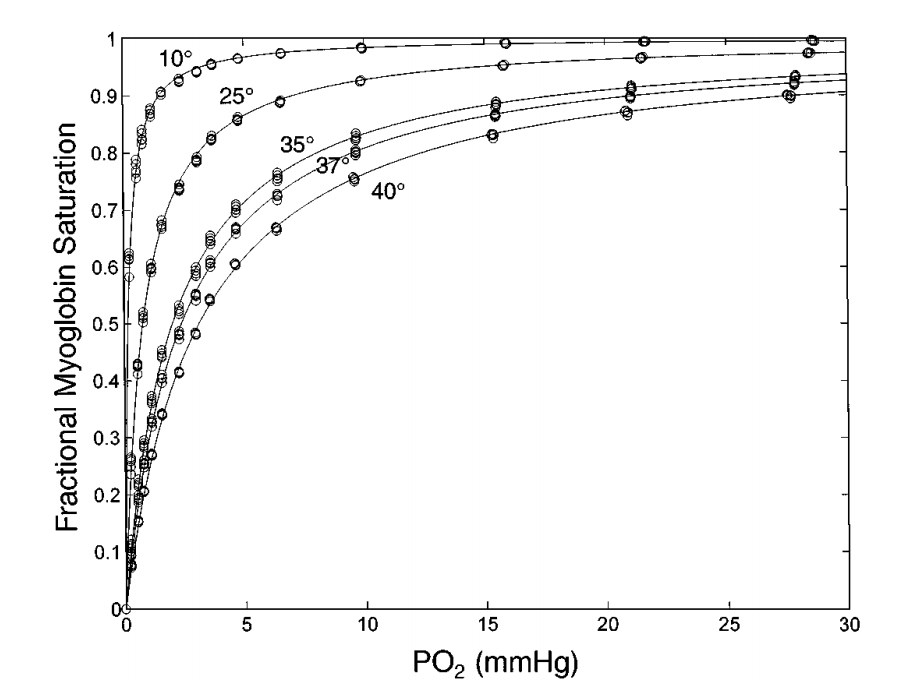 Role of myoglobin in oxygen storage

Note that the p50 value is somewhere around 2.5-3.0 mmHg. This protein binds oxygen with a very high affinity, and is fully saturated at a desperately low PO2, which probably represents the PO2 of muscle fibres at rest. This high affinity at low PO2 helps myoglobin pick up all the oxygen molecules left by haemoglobin, which has very poor affinity for oxygen at such low PO2 values. With increasing hypoxia, oxygen is released from this protein, hopefully maintaining the intracellular PO2 above the Pasteur point. As such, its main role is thought to be the storage of oxygen for a metabolic rainy day, when strenuous and sustained exercise is called for.

How much oxygen is stored in myoglobin at any given time? Given that only one molecule of oxygen can be bound by one myoglobin monomer, this rainy day deposit is surprisingly small. Brandis gives 200ml, or about 15% of total body oxygen stores on room air (other authors give values which fall within a 300-300ml range). It is clearly not designed for sustained use, at least within the human frame of reference. Studies of myoglobin-dependent oxygen supply (eg. Bekedam et al, 2009) have revealed that skeletal muscle probably has about 7-10 seconds worth of metabolic activity because of myoglobin oxygen reserves. Other mammals make more use of it; for instance in the adult Californian sea lion, myoglobin contributes 47% to the total body oxygen stores, so that they may carry on their playful epi-mesopelagic foraging behaviour without needing to come up for air.

Interestingly, myoglobin does not seem to be essential for survival. In the spirit of a time-honoured tradition in physiology, the research of myoglobin resulted in the mass production of genetically crippled knockout mice which did not possess it (Garry et al, 1998). They were weirdly healthy. The cardiac and soleus muscles of these mice were depigmented and had the appearance of chicken breast, but apart from that their performance and exercise capacity was quite normal. Extensive proliferation of capillaries in the muscles of such animals demonstrate the compensatory mechanisms which are required to survive "amyoglobinism". Without myoglobin or a substantially remodelled capillary circulation, anoxia of muscle may develop even in the course of normal function. For example,  Endeward et al (2010) demonstrated that over the course of a 150 msec cardiac systole, myoglobin was responsible for maintaining oxygen supply for around 50 msec.