By Alex Yartsev - Jun 08, 2015
Last updated Fri, 02/11/2022 - 18:48
Topic: Respiratory system
All SAQs related to this topic
All vivas related to this topic
This chapter is most relevant to Section F9(iv) from the 2017 CICM Primary Syllabus, which expects the exam candidates to be able to "Describe the carbon dioxide and oxygen response curves and how these may be used to assess the control of breathing". Though many will be familiar with the aforementioned response curves (which are discussed in greater detail elsewhere), most will not realise that this is something you can use to assess the control of breathing. Surely, there must be such a use for these graphical relationships, because otherwise the college examiners would not have put this syllabus item under the Pulmonary Tests and Equations section.

Nowhere is this topic explained better than in the UpToDate article on the control of ventilation. However, that will cost you. The best that a freegan can get seems to be Methods in the assessment of the control of breathing by Saunders, from 1980.

To begin with, the following truths are restated here:

For example, this curve describes the (linear) effect of a rising PaCO2 on minute ventilation. As one may note, the relationship is linear, provided the PaO2 remains stable.

Now, as a reader has pointed out, this graph is an example of poor graph design, as the dependent variable really should be on the y-axis; i.e. the way these data are presented makes it look like increasing CO2 causes the minute ventilation to decrease, and not the other way around. The more sensible way to represent this information should be this: 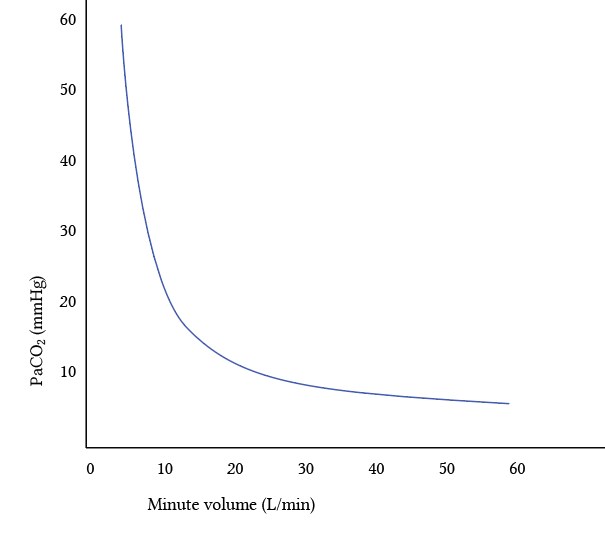 However, by convention, the partial pressures of CO2 and O2 are always on the x-axis in textbooks and serious reputable publications. Unfortunately, that's the sort of literature the college examiners will likely be reading to make the official exam answers and viva stations for the CICM primary, and the exam candidate would be best served by producing familiar-looking diagrams. One does not want to make the tired hung-over examiners perform any unnecessary mental contortions on the way to giving you your marks.
Anyway: a similar curve can be produced for falling oxygen, which is far from linear and only really rises when the PaO2 is below 60 mmHg (depending on what the PaCO2 is): 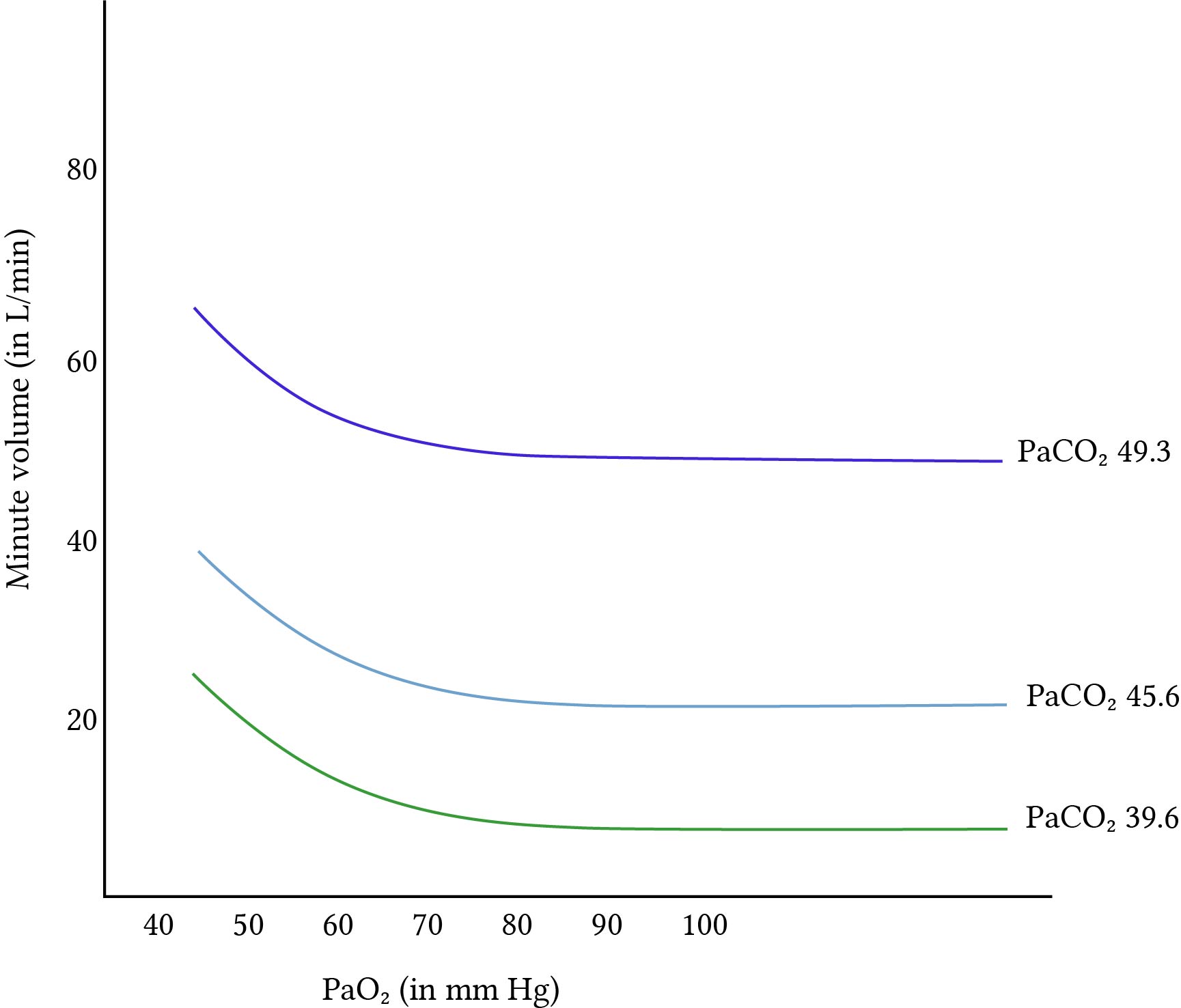 So, in summary, the responses to hypoxia and hypercapnia can be quantified by observing the change in minute volume for a given change in gas arterial partial pressure. One can accomplish this with the aid of a spirometer and a blood gas machine. But how is this helpful, and how does it fit into the Pulmonary Tests and Equations section?

When would you ever need to test a patient's ventilatory control response to O2 and CO2? Well; for example, one might encounter a scenario where the other lung function tests are completely normal, and yet the patient remains either hypoxic or hypercapneic, raising the suspicion that something is fundamentally wrong with their ability to regulate their respiratory function. In this scenario, one might sit down with the patient and explain to them that you intend to partially asphyxiate them in a series of diagnostic procedures. These are:

The hypoxic challenge is usually carried out in a specially equipped laboratory, as most respiratory equipment you might find laying around will not be able to deliver an FiO2 below 21%. In this test, a patient is connected to a gas supply which gives them some sort of hypoxic gas mixture. Usually, this is actually a rebreathing apparatus (essentially, some sort of bag) with a tightly controlled CO2 concentration (most setups include some sort of scrubber). The patient keeps breathing, the oxygen content of the bag keeps dropping, and conventionally this would be expected to produce some level of respiratry distress, increased respiratory rate, high tidal volumes etc. One is expected to triple their minute ventilation when one's PaO2 drops to 40 mmHg, corresponding to sats of 60% (Rebuck et al, 1974). "Linear and reproduceable" is how the authors described the responses of healthy individuals.

This is though to be mainly a test of the peripheral chemoreceptor function. Abnormal results may suggest some sort of intrinsic problem with these chemoreceptors, or with the central integration of the signals arising therefrom. Other causes of poor sensitivity to hypoxia include:

The hypercapnic challenge is essentially the same as above (subject breathing into a glorified bag), but this time the rebreathing of carbon dioxide is the objective and the oxygen is made irrelevant (Read, 1967). This is achieved by removing the CO2 scrubber from the same circuit as above, and filling the circuit with 100% oxygen. As the subject continues rebreathing the increasingly hypercapnic hyperoxic gas mixture, the minute volume should also increase in a "linear and reproducible" fashion. Specifically, the minute volume should increase by 3L/min for every 1mmHg PaCO2. There's a fair amount of normal-ish interindividual variation, and thus the lower range of normal is 1L/mmHg.

This is a test of central chemoreceptors. Why might this be abnormal? The reasons are obvious:

The mouth occlusion pressure is not quite as brutal as it sounds, and measures the maximum pressure which is generated over the period of a 100-millisecond occlusion of the airway. The idea is that the occlusion is so brief that no voluntary response to it is possible, i.e. the patient cannot "cheat" by voluntarily inhaling more vigorously; conscious or unconscious responses to test occlusions in a series of healthy patients were found to have a minimum latency of 150 milliseconds, which means it is physically impossible to react to an occlusion more brief (Whitelaw et al, 1975). This pressure therefore represents pressure generated by the inspiratory muscles at FRC, which is a reasonable surrogate for respiratory muscle power, which in turn is a reasonable surrogate for central ventilatory control. Unlike the other two tests, this one tests the effectors rather than the sensors.

Saunders, K. B. "Methods in the assessment of the control of breathing." Methods in Clinical Pharmacology—Respiratory System. Palgrave, London, 1981. 57-63.