By Alex Yartsev - Jun 08, 2015
Last updated Sun, 01/26/2020 - 15:44
Topic: Respiratory system
All SAQs related to this topic
All vivas related to this topic
This chapter is most relevant to Section F9(i) from the 2017 CICM Primary Syllabus, which expects the exam candidates to be able to "describe the measurement and interpretation of pulmonary function tests". This is another topic which seems to straddle the First Part and Second Part exam territory, as questions about lung function testing appear in both exams. Question 21.2 from the first Fellowship paper of 2014  and the identical Question 9.1 from the first  paper of 2011 both asked for trainees to interpret a set of pulmonary function data. In the First Part exam, Question 18 from the secod paper of 2011 assked the trainees to discuss pulmonary function test abnormalities expected from a person with severe obstructive lung disease.   For this reason, a brief summary of lung function testing is offered in the Second Part reading section as a brief reminder.
A summary of measurement and interpretation of these tests belongs in a table:

In terms of reading material, the ideal single resource would have to be the 2005 article by Riccardo Pellegrino. It is comprehensive yet accessible and focuses on the interpretation of abnormalities and on the possible sources of error. An even more accessible article is Johnson & Theurer (2014) for the American Family Physician, which is readable to the point where an average ICU trainee would become suspicious of it. If one is naturally distrustful of any material which was intentionally made easy to read, one could instead burrow into the ERS/ATS Task Force Statements on the Standardisation of Lung Function Testing (Miller et al, 2005; Wanger et al, 2005;  Graham et al, 2017), as these would probably represent some sort of gold standard. Unless otherwise specified, the definitions reproduced below were derived from these guideline statements.

This is a physiological test which measures respiratory performance as a function of time and volume, which therefore incorporates flow (as flow is volume over time). Conventionally, this test is performed in the following manner:

That graph will be familiar to most: 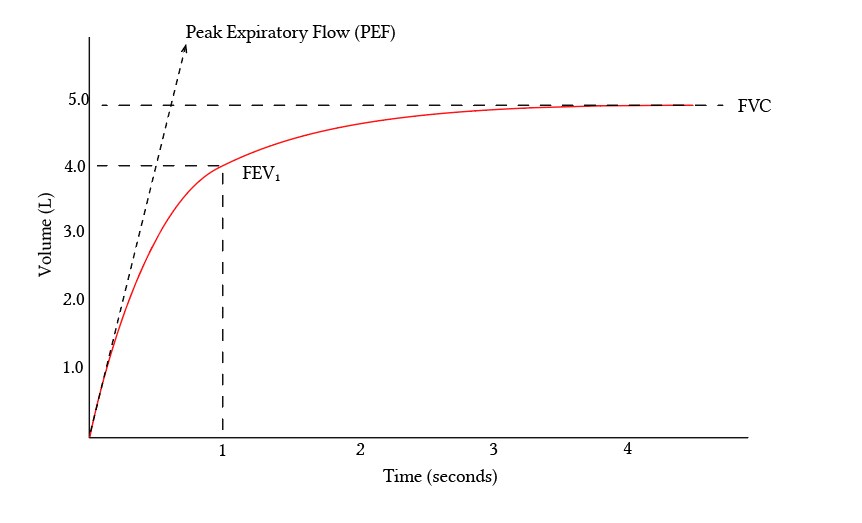 If one were ever for some reason asked to reproduce this in their exam, three critically importal elements must be plotted along it, for maximum marks-scoring: the, FVC FEV1 and PEF.

FVC: Forced Vital Capacity: "the maximal volume of air exhaled with maximally forced effort from a maximal inspiration, i.e. vital capacity performed with a maximally forced expiratory effort".  This manoeuvre measures the difference between TLC and RV, which is VC. It is an "F" VC because it is forced, to discriminate between this method of measurement from other, more leisurely and less compelled methods of measuring the VC. A high value here may be a marker of lung overinflation

FEV1: Forced Expiratory Volume over 1 second: "the maximal volume of air exhaled in the first second of a forced expiration from a position of full inspiration". As a test of respiratory function it is made more meaningful by its use in a comparison with the FVC:

FEV1/ FVC ratio: This is the ratio of gas expired over  the first second to the total FVC. As such, it is an indicator of whether or not there is any airflow limitation. If the ratio is decreased, that means that there is some limitation to the rate of air egress from the lungs, which typically points to a diagnosis like COPD or asthma. Exactly what "decreased" means seems to vary. The GOLD criteria suggest we use a cut-off of 70%. The ATS instead use the "lower limit of normal" criteria from the fifth lowest percentile of spirometry data reported by the Third National Health and Nutrition Examination Survey (NHANES III).  An increased FEV1/FVC ratio is also possible, and this is usually associated with a restrictive lung disease pattern.

PEF is "the highest flow achieved from a maximum forced expiratory manoeuvre started without hesitation from a position of maximal lung inflation". It is the peak expiratory flow rate measured in L/s.  This parameter can be derived from the expiratory curve data; being the rate of volume change per unit time, one would logically expect this to be represented by the gradient of the expiratory curve.

Alternatively, one could represent the PEF more effectively by reporting flow over time, which would produce a graphic like this one, stolen from the ERS statement on PEF measurement (Quanjer et al, 1997): 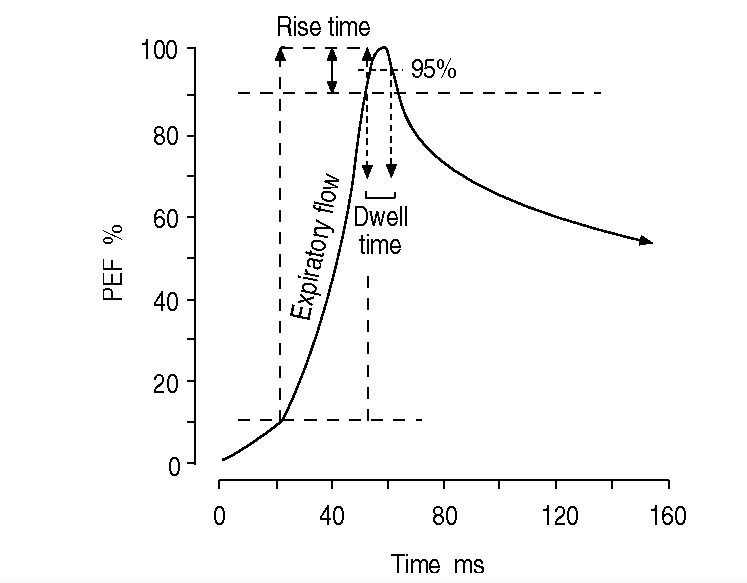 The couple of extra parameters here are the rise time (RT, the time it takes for the flow to get from 10% to 90% of the peak value), and the dwell time (DT,  the time spent at over 90% of peak flow). Together, these metrics have meaning in the scenario of long-term follow-up, but they are probably somewhat irrelevant in the impatient world of intensive care medicine, where instant gratification is all-important.  In any case, a discussion of flow-volume curves is somewhat outside of the scope of this chapter.

A low PEF suggests obstructive disease, but not necessarily so. It could also represent poor effort. In fact, a PEF value, when measured sequentially using a crude bedside instrument, is an excellent indication of whether or not somebody is about to develop the sort of respiratory muscle weakness that gets you intubated. An excellent example is the scenario of a Guillain-Barre syndrome patient whom one is monitoring. González et al (2016) report their experience, where GBS patients with a peak flow less than 194 ml/s (~41% of predicted) were inevitably intubated on the following day.

As many of these concepts are already well explored amid vast swaths of text, the following links are offered in lieu of extensive explanations:

To simplify revision, that ubiquitous spirometer diagram is reproduced here again for the convenience of the beleaguered reader: 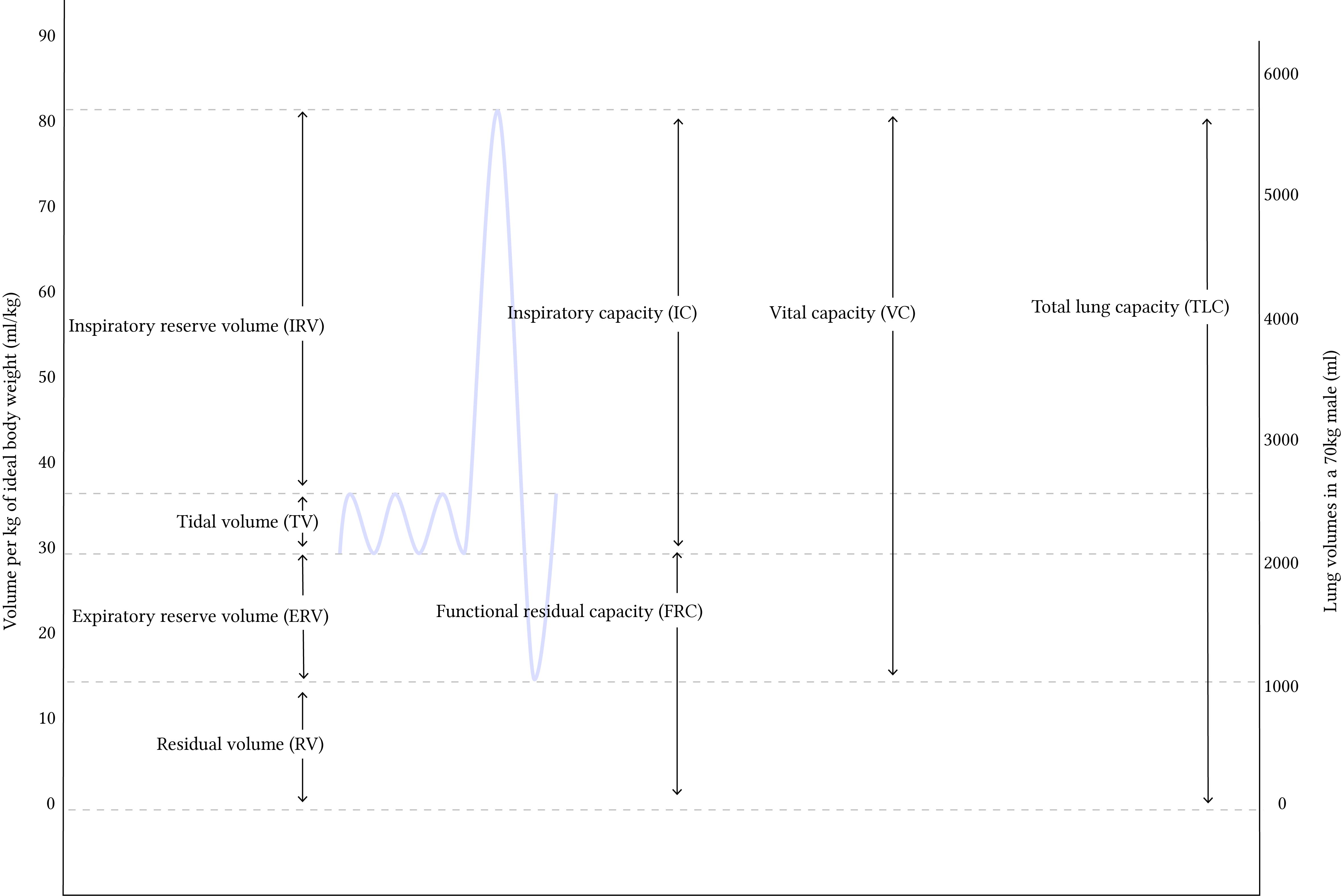 FRC is the functional residual capacity. It is the volume of gas present in the lung at end-expiration during tidal breathing. It is composed of ERV and RV, and is usually 30-35 ml/kg, or 2100-2400ml in a normal-sized person. A higher than normal FRC suggests hyperinflation (eg. in asthma) or large volumes of dead space (eg. emphysema). A low FRC is produced by supine position, small stature, and all the factors which influence lung and chest wall compliance (emphysema, ARDS, PEEP or auto-PEEP, open chest, increased intraabdominal pressure, pregnancy, obesity, anaesthesia and paralysis).

RV is the residual volume. It is defined as "the volume of gas remaining in the lung after maximal exhalation", As with FRC, a high RV suggests expiratory gas trapping or bullous dead space. RV decreases with any disease that globally decreases all lung volumes, for example, idiopathic pulmonary fibrosis and obesity.

ERV (expiratory reserve volume) is the volume of gas that can be maximally exhaled from the end-expiratory level during tidal breathing. It is the volume between FRC and RV.

IC (inspiratory capacity) is the maximum volume of gas that can be inspired from FRC.

VC (vital capacity) is the volume change between the position of full inspiration and full expiration, i.e. it is the difference between the TLC and the RV.

TLC is the total lung capacity or the sum of all volume compartments. A high TLC may coexist with a very poor FEV1 and FVC in emphysema. A very high TLC suggests hyperinflation.  A low TLC (below the 5th percentile of predicted) suggests restrictive lung disease, such as pulmonary fibrosis.

The discussion, in minute detail, of the pathological correlations of each and every lung volume subdivision, would probably benefit nobody. However, one can envision how this topic might become relevant if the college ask about the changes in lung volumes which might be expected of a specific lung disease. In that scenario, the trainee might be able to signal their cleverness by  reproducing this excellent graph from an article by Mohammed Lutfi (2017), which is reproduced here with only the most minor modification: 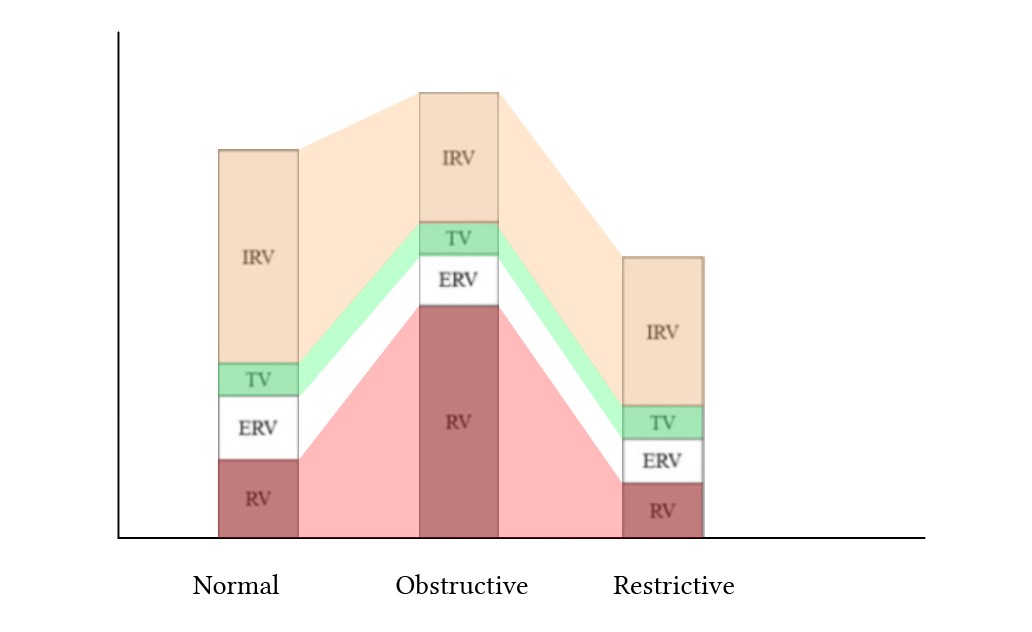 The measurement of oxygen diffusion capacity made so unpalatable by the need to sample arterial blood, usually this is something approximated from the diffusion of carbon monoxide.

DLCO is the diffusing capacity for carbon monoxide, a measure of the efficiency of the lung as a gas exchange surface.  It is expressed in ml/min/mmHg, and a value below 40% of predicted suggests a severe diffusion defect. However, because the DLCO is measured by calculating the uptake of carbon monoxide by the blood, it is an easily confused parameter. For instance, if one is severely anaemic, there will be too little haemoglobin to bind much carbon monoxide, and the test will suggest that the diffusing capacity is low, because it will appear as if very little carbon monoxide was able to get through into the circulation.

Thus: DLCO may be decreased if:

It is probably also worth pointing out that DLCO may also be falsely increased in some situations, for example where there is pulmonary haemorrhage. The extravascular haemoglobin will bind a large amount of the carbon monoxide, giving you the impression that it has diffused into the bloodstream.

If the DLCO is markedly low and its measurement is "true", one would also expect to see some changes in the spirometry data. For example, where the DLCO looks like interstitial lung disease, one would expect to see some restrictive-looking lung volumes. If one does not see a pattern consistent with the change in DLCO, then most likely the pulmonary circulation is to blame. In Question 26.3 from the second Fellowship exam paper of 2018, the college presented candidates with just such a situation, where all the other variables were completely normal; the examiner comments were "problem is not in the lungs but with the blood flow i.e. pulmonary vascular disease/pulmonary hypertension". In short, the possible causes of an isolated low DLCO, according to UpToDate, are:

More broadly, the following table is offered in Johnson & Theurer (2014) as a helpful list of possible causes for situations where other things, as well as the DLCO, are abnormal:

KCO (DLCO/VA) is the transfer coefficient for carbon monoxide. It is calculated as the DLCO per unit of alveolar volume. As such, the KCO will not be confused by changes in lung volume, and is a more faithful representation of the gas diffusion efficiency. In the