This chapter is at least loosely associated with Section F12(ii) from the 2017 CICM Primary Syllabus, which expects the exam candidates to be able to "describe the principles of capnography, including calibration, sources of errors and limitations".  The interpretation of abnormal end-tidal capnogram patterns is explored elsewhere. The objective of this resource is to describe the physical principles important for the measurement. A more precise objective is difficult to delineate considering the brevity of the syllabus entry and the lack of coherent examiner's comments to the single past paper question on this topic, Question 10 from the second paper of 2019. One basically has to assume that the college would want their trainees to know something about the physical principles which allow CO2 detection, the design characteristics of end-tidal capnometers which use these principles, and the potential sources of error.

A good introduction to the topic is offered by Ward & Yealy (1998), and it would serve the purposes of most people whose time and interest in capnometry are finite. For the rest, Capnography by Gravenstein et al (2011) is an entire 490-page textbook dedicated to the subject. The latter resource was used to structure this chapter. Omissions of important material can be defended on the basis of the almost total irrelevance of this subject.

To be even more clear, essentially everything CO2-related one can see in the ICU will be capnography of some sort, but only the measurement and display of the very last CO2 value before inspiration is actual end-tidal capnography. However, for the purpose of most bedside conversations, "end-tidal capnography" is a term used to describe the whole process of measuring expired CO2.

There are numerous methods of measuring CO2 in air:

There is no universe in which a CICM First Part exam candidate could ever be expected to know these in any great detail, but to have some superficial understanding of the physics and chemistry would probably be harmless. For this, the relevant chapter by M.B. Jaffe from Capnography (Ch. 37, p.381) is summarised and distilled here into easily digested point-form. Where possible, the limitations and disadvantages of each method are listed alongside the method.

Measurement of CO2 by infrared spectroscopy

Without recapitulating large sections from the chapter on pulse oximetry, the scientific foundation of infrared CO2 can be summarised as follows:

That CO2 absorption peak at 4.26 μm is convenient because it is well separated from other absorption peaks of other substances which might be present in the respiratory gas mixture. Observe this lovely image from Wikimedia Commons: 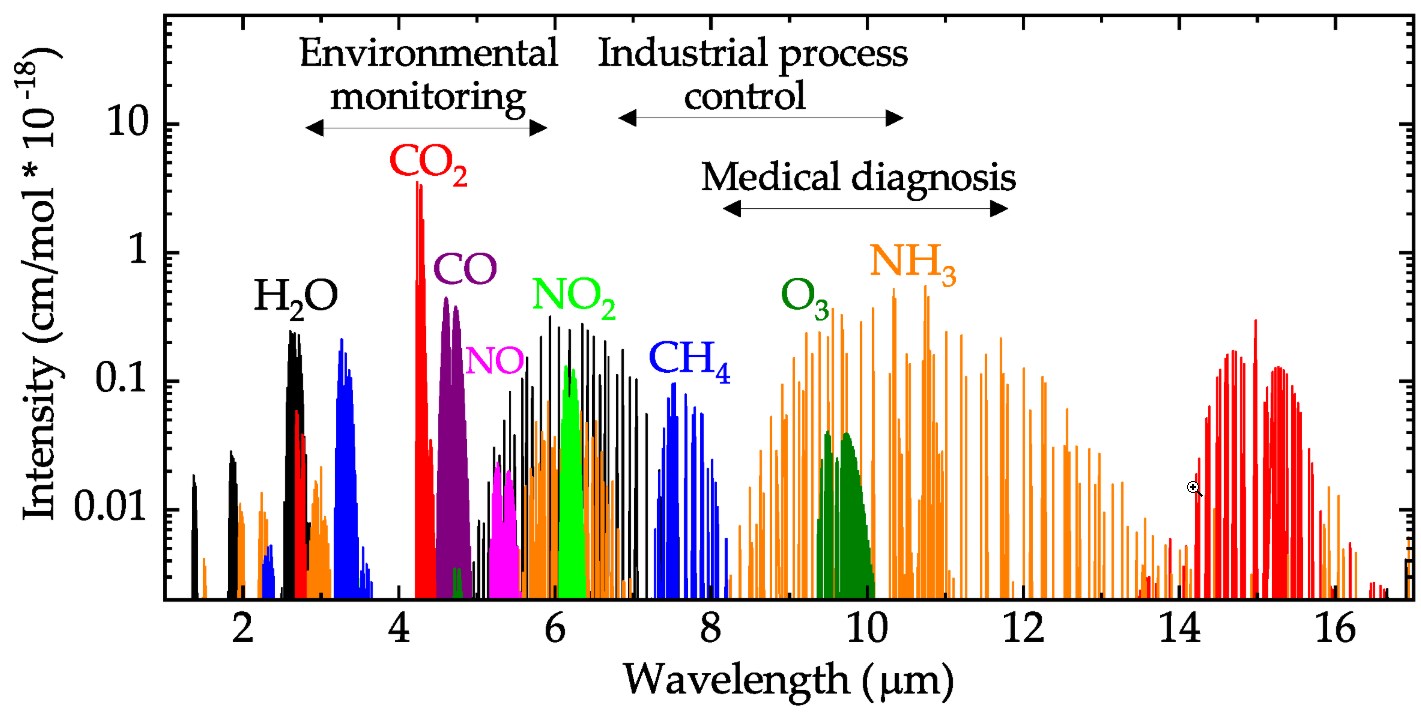 As you can clearly see, at the near-infrared wavelength of 4.26 μm the CO2 is very much on its own. In fact, the near-IR range of the electromagnetic spectrum is quite good for separating CO2 from the rest of the pack. In order to absorb IR radiation, a molecule has to be asymmetrical and polyatomic, because IR absorption occurs as a consequence of atomic vibration in a molecule with a dipole moment. Without going into completely irrelevant (but fascinating) detail, it will suffice to say that monoatomic helium and nice symmetric O2 molecules do not have those characteristics and consequently do not absorb light in the IR spectrum. Molecules which are strongly asymmetrical, and particularly ones with a double bond (eg. C=O), absorb IR avidly, which accounts for the height of the CO2 peak in the diagram above.

Anyway, back on topic. The only gas which mimics the absorption characteristics of CO2 is nitrous oxide (N2O), which can occasionally fool the older sensors. Various spectrum-narrowing IR filters have been built into anaesthetic gas monitoring equipment which - these days - is reasonably good at discriminating between these substances. In any case even in the bad old days the error was not very great - for example, Kennell et al (1973), in the Jurassic period of anaesthesiology, reported a maximum error of 0.7% CO2 (or approximately 1.12 mmHg) when a gas mixture containing 70% N2O was in use. At worst, one would have to apply a correction factor to one's CO2 measurement, which is usually something like [corrected CO2 = observed CO2  × 0.90].

This being the method of measurement, one might be able to imagine that a device designed to perform it would consist of the following components:

There are two main ways of doing this, which are usually described in terms of "mainstream" and "sidestream", the latter ironically being the more mainstream of the two (i.e. in common use). The mainstream monitor places the detector directly into the path of moving respiratory gases, whereas the sidestream monitor samples these gases by removing a small fraction of them via an additional set of tubing, to be analysed by a detector array at some distance from the patient (i.e somewhere in the monitoring rig). It's one of those things where a diagram helps:

The sidestream system entrains some variable volume of gas per minute from the main circuit, usually no more than 200ml/min. Though negligible from a clinical standpoint, strictly speaking this represents a circuit leak, and the ventilator flowmeters will usually report it as such (at least insofar as it affects the difference between delivered and expired volumes, on the volume-time waveform).

Each method has its advantages and disadvantages:

Though this technique is called "colorimetric" (or "colourimetric" if you're in the colonies), the exact definition of the term describes analytical chemistry by the quantitative analysis of colour, which is not exactly what happens when you roughly eyeball the colour change indicator after an intubation. Therefore, the application of "colourimetry" to the use of these devices perhaps drapes an unfairly scientific facade over something which essentially a urine dipstick applied to the airway.

Anyway. The technique usually takes advantage of the fact that CO2 tends to increase the concentration of the hydrogen ions in solution when it dissolves in it, lowering the pH. One can therefore employ a number of different chemical indicators to detect pH, and use that as the surrogate for CO2. Under most earthly circumstances, your patient will not be exhaling anything else that is likely to be highly acidic.

With a premise this simple, one would expect this sort of capnometry to be the earliest available form, with all the others to come later. That's probably true. The first recorded instance of anybody measuring expired CO2 in this way comes from Mariott (1916), who collected expired air and tested its CO2 levels by the visual identification of a colour change:  "The reaction of such a solution may be determined by adding to it an indicator such as phenolsulphonephthalein, which shows over a considerable range of reaction definite color changes." That would probably have been a rich burgundy-purple. The first use of this to detect correct placement of an endotracheal tube was probably by Berman et al (1984), although the authors for some reason settled on the use of cresol red, usually used as an aquarium pH indicator.

All these options required you to bubble the expired gas through some puddle of indicator solution, which is messy and inconvenient. Modern devices such as this Medtronic product use some porous material (usually foam or paper) which has been impregnated with pH-sensitive indicator and which ships as a dry product, relying on the humidity of exhaled gas to provide the water required for the aqueous reaction. This also extends the shelf life of the device.

The limitations of these devices are as follows:

Problems with expired CO2 measurement as a concept

Yes, each specific technique has its various drawbacks, but overall one can say that capnography in general has some limitations: