This chapter is vaguely related to Section F12(ii) from the 2017 CICM Primary Syllabus, which expects the exam candidates to be able to "describe the principles of capnography, including calibration, sources of errors and limitations".  Though the syllabus document does not explicitly state that this gap between PaCO2 and EtCO2 is essential knowledge, its constant appearance in the exams suggests that it probably is. It has featured in three SAQs, each of them essentially identical:

Of these, the college answer to Question 21 was the laziest ("Many candidates didn’t distinguish between the different types of dead space. In general this topic was not well understood.").  The other two, however, were informative as to what was expected. Additionally, this topic has come up in the Part two exam papers, as Question 9.2 from the second paper of 2008, which at least listed some different causes for the gradient. As a result, the revision section from the Part Two exam has a brief entry on this topic, to help refresh the memories of senior trainees. Obviously, some occasional refreshing is called for, because none of the aforementioned SAQs had a pass rate higher than 30%.

This gap is very well known, and is clearly a favourite among examiners in all sorts of critical care fields. As such, there are many good articles and it is difficult to make one specific recommendation from among multiple good resources. One stand-out reference is Michael Donnelan's chapter for Applied Technologies in Pulmonary Medicine (2011), which is somehow paywalled by Karger by available for free via Google Books. Another excellent resource is Capnography Outside the Operating Rooms by Bhavani Shankar Kodali (2013).  Kodali is in fact a prolific FOAM author and his website (capnography.com) is an absolute goldmine of carefully referenced information, in essence a textbook on caphography for those unwilling or unable to pay full price for Capnography by Gravenstein et al (2011).

The influence of dead space on the PaCO2-EtCO2 gap

The college answer to Question 9 from the first paper of 2009  suggests we all go look at Power & Kam's "Physiology for the Anaesthetist" where apparently there is "an excellent graph... which helps understand alveolar dead space". Back in those days, the college was somewhat undersubscribed with trainees, making them a valuable resource worth investing in; as such the examiner's comments are even furnished with a page reference to the aforementioned graph, something unthinkable in the modern era of disposable multitudes.  Thus, it is possible to track down the aforementioned excellent graph and reproduce it here with no permission whatsoever (this version comes from the 3rd edition of the textbook, p.89): 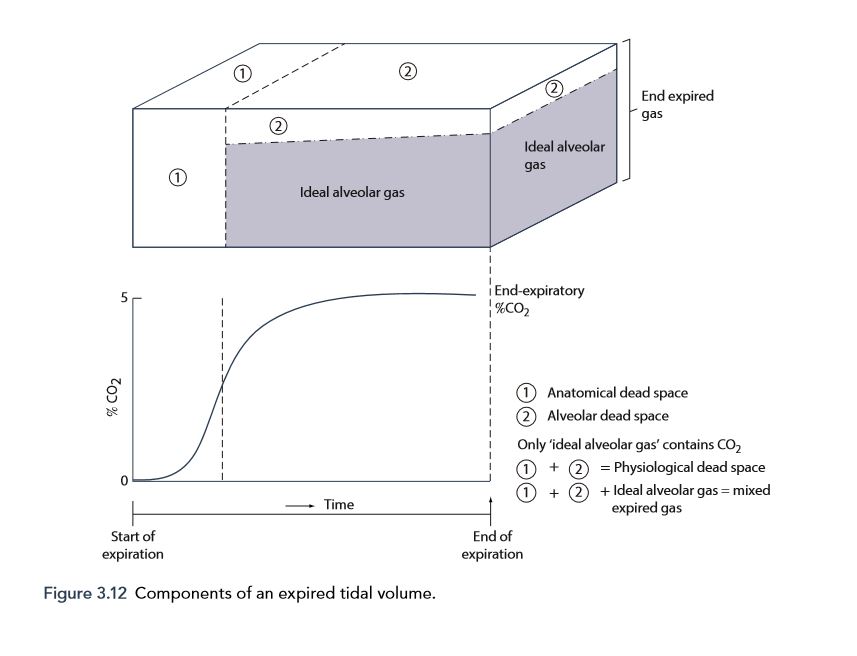 Without going into an excess of detail (again), it will suffice to say that:

So, basically, it's all to do with dead space. Alveolar dead space in particular is what affects the end-tidal CO2 measurement, which is taken at the end of expiration. By that stage, anatomical dead space has completely emptied, and is no longer contributing to the total expired CO2 value. One might correctly say that the anatomical dead space contributes to expired capnography, but not to end-tidal capnometry, as it affects the shape of the early capnography curve. The college felt strongly enough about this distinction to complain that "many incorrectly attributed anatomical dead space as a contributor to the PaCO2-ETCO2 gradient" in their answer to Question 3 from the second paper of 2018.  Interestingly, though dead space is the major reason for the PaCO2-EtCO2 gap, according to the examiners "discussion of the various types of dead space did not score marks".

Normal difference between PaCO2 and EtCO2

From the above, it follows that there is some normal value for the PaCO2-EtCO2 gap, which would correlate to the volume of alveolar dead space (normally, a very small volume in healthy adults). Most textbooks give a range of 2-5 mmHg, usually without a reference. When a reference is available, they usually give Nunn & Hill (1960), who actually measured a mean value of 4.6 mmHg (S.D. ± 2.5)

For some more detailed empirical data,  Satoh et al (2015) measured this gap in a series of patients, all anaesthetised and supine, and of different ages. The authors found values of 2.4-4.3 mmHg,  which was apparently "similar to the gradient of values previously reported for other clinical situations". The difference increases slightly with age, which the authors attributed to age-related decrease in FRC and increase in alveolar dead space. The difference was not massive: in the original image below (Satoh et al, 2015, Figure 1) groups A to G are decades of age, starting with age 16. As one can see, there was barely 1-2mmHg difference between the groups, and all groups up to the age of 76 had individuals with a 0mmHg gap (i.e. no alveolar dead space whatsoever). 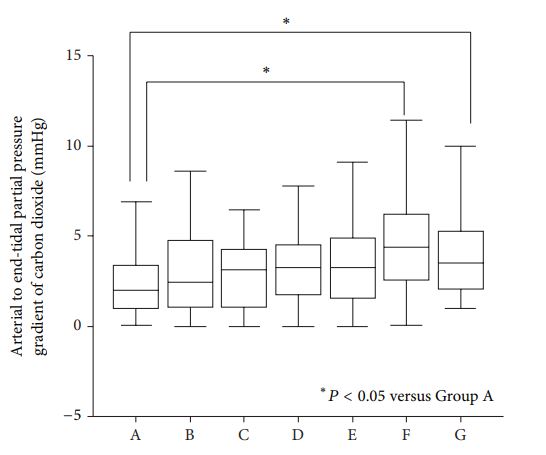 Causes of an increased difference between PaCO2 and EtCO2

It is also possible to have a negative PaCO2 - EtCO2 gap, i.e. scenarios where the arterial CO2 is actually lower than the end-tidal:

Satoh, Kenichi, et al. "Evaluation of differences between PaCO2 and ETCO2 by Age as measured during general anesthesia with patients in a supine position." Journal of Anesthesiology 2015 (2015).

Fletcher, R., and B. Jonson. "Deadspace and the single breath test for carbon dioxide during anaesthesia and artificial ventilation: effects of tidal volume and frequency of respiration." British journal of anaesthesia 56.2 (1984): 109-119.

Kodali, Bhavani Shankar. "Capnography outside the operating rooms." Anesthesiology: The Journal of the American Society of Anesthesiologists 118.1 (2013): 192-201.