The CICM WCA document (“Ventilation”) does not make any mention of humidification techniques. However, the topic has some exam relevance. It has come up as half of Question 3 from the second Part I paper of 2012, where the trainees were expected to “describe the mechanisms of humidification used within Intensive Care practice”. A good answer expected them to “briefly describe…  the mechanisms of achieving humidification, e.g. bubble systems, heat-moister exchange filters, heated water, ultrasonic, etc. mechanisms.” The pass rate was 0%. For a more practically-minded level of question, the merits and demerits of active and passive humidification systems were explored in the Part Two exam, in Question 15 from the first paper of 2005. For whatever reason, this respiratory equipment question ended up being parked in the already bloated Equipment and Procedures section, and it was answered much better (81% pass rate) as it has actual relevance to the bedside practice of Intensive Care Medicine.

In answer to  Question 15 from the first paper of 2005, it is possible to expand on this brief blurb with a tabulated comparison which explores the two main forms of circuit humidification: heat/moisture exchangers and active humidifiers.

For the time-poor exam candidate, this summary is sufficient. The rest of this chapter is a somewhat disorganised exploration of material which is unlikely to be examinable. Because the physics of humidity and the features of disposable Heat and Moisture Exchangers (HMEs) are discussed in greater detail elsewhere, this chapter will largely focus on the methods of actively forcing water molecules to join the inspired gas mixture. There are several excellent resources to refer to, but by far the best is probably the 2014 article by Al Ashry and Modrykamien.

Humidification for mechanical ventilation aims to match the normal humidification capacity of the human respiratory tract, i.e. to achieve the target temperature of 37°C and 100% relative humidity at the isothermic boundary (just past the carina). This is the expectation upon active humidification equipment. It is more than what is expected of HMEs, which are only expected to perform for brief periods and which are permitted to be less efficient. However, the ICU patient may be trapped on the ventilator for some time, and therefore will require a sustained and reliable source of airway humidity. The aforementioned ICU patient may also be breathing in some profoundly disturbed manner, which might have some relationship to the reason as to why they are mechanically ventilated in the first place. In short, an ideal active humidifier needs to satisfy the following performance characteristics:

Basic structure of an active heater/humidifier

There are some basic features which are shared by all such systems, and they vary only by the expense and sophistication of the ways in which they manage the problems of trying to keep the gas clean, warm and humid on the way to the patient. 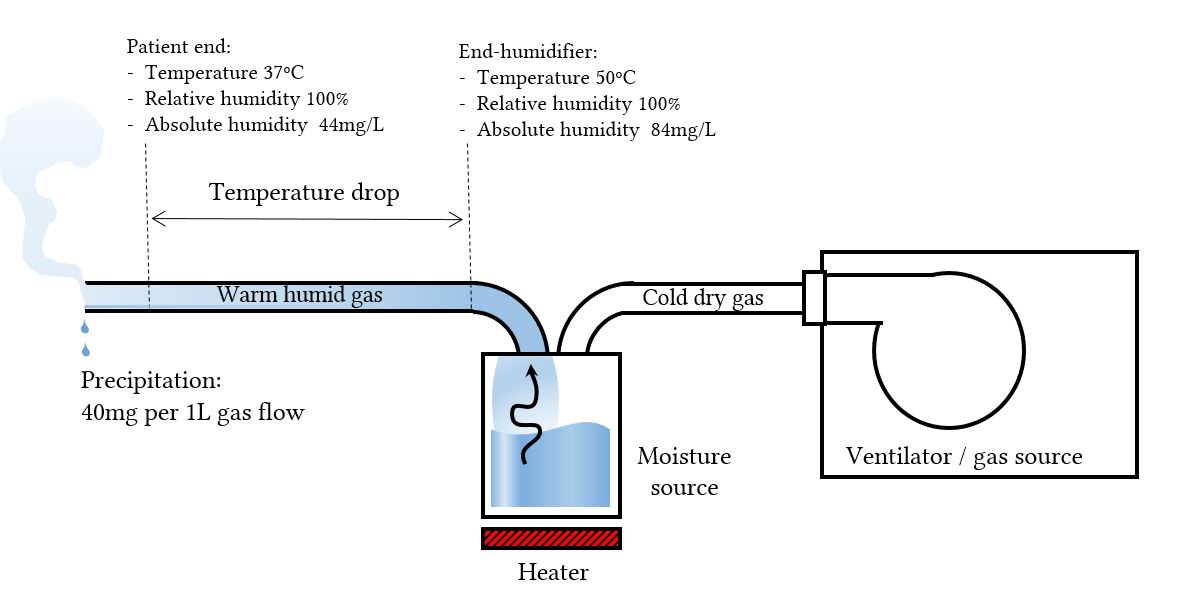 Humidity in the circuit degrades as the gas flows along the tubing, because the walls of the tubing are generally thin and corrugated. This means they offer a relatively large surface area for heat exchange with the ambient atmosphere. The ambient atmosphere of an ICU is usually very carefully controlled, and well below 37ºC; and because the solubility of water vapour in gas is dependent on temperature the humidity of the gas decreases as it cools on the way to the patient. The duration of exposure to this ambient temperature must therefore also influence this loss in temperature. In short, the effectiveness of the humidifier in terms of providing a stable 37 ºC / 100% humidity is determined by the following factors:

The different designs of ventilators differ in their handling of these factors, as will be discussed below. The four major design types are:

Because the circuit precipitation can become a major issue, many humidifier companies bundle their “kettles” with heated circuit components to prevent this “rain-out” phenomenon and to keep the temperature of the circuit stable throughout the circuit length.  These tend to come with a heated wire which maintains a certain circuit temperature. 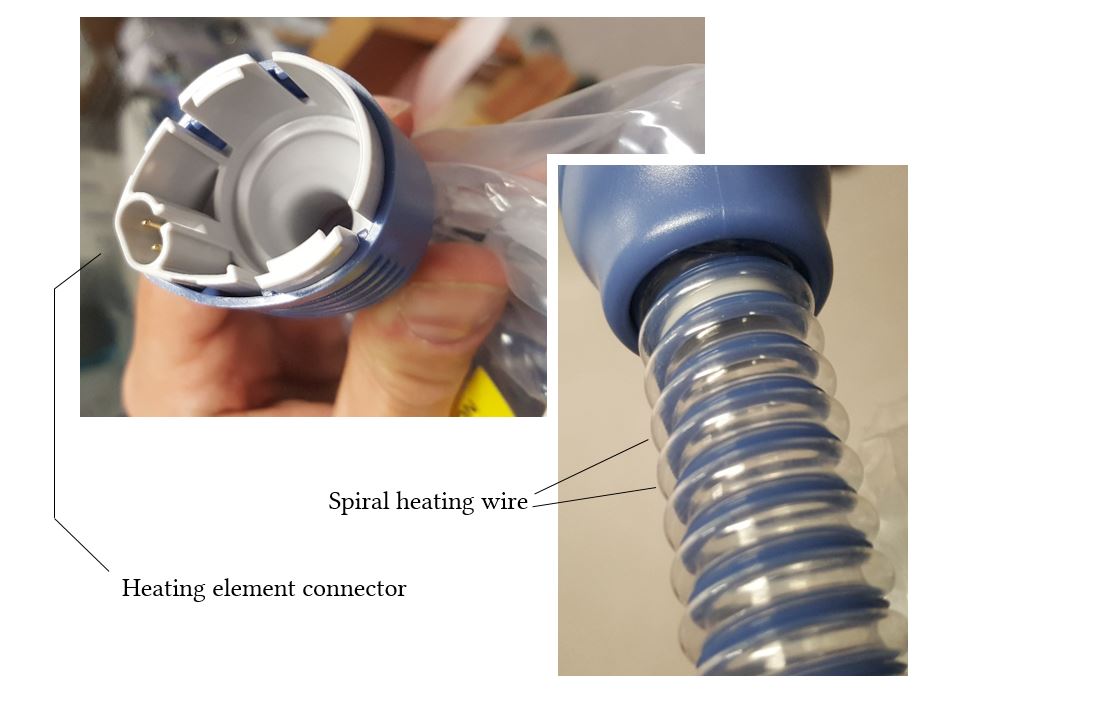 Depicted is a Fisher & Paykel model from their Airvo kit. The wire generally reaches a temperature of around 65ºC (Lee et al, 2014). The heated circuits have certain limitations: 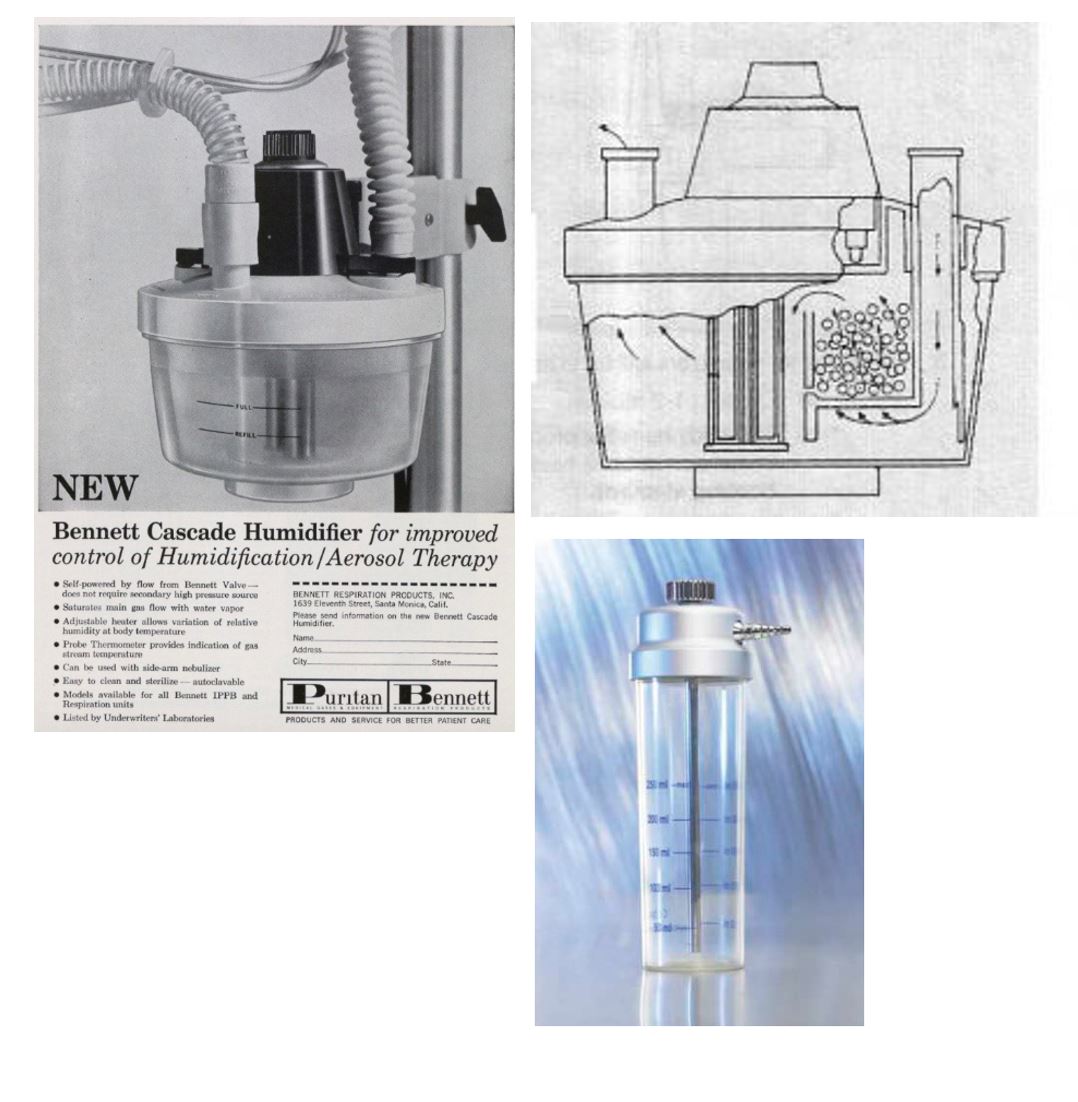 They were fairly popular in the 1980s, but have subsequently lost out to pass-over humidifiers because of notable limitations:

As one might guess from the name, these humidify the inspiratory gas mixture by letting it drift passively over a steaming lake of heated water. Because the outlet is not submerged underwater, this thing only offers the most minimal resistance to gas flow, often even less than the circuit tubing. Because it does not bubble, it is a quiet and polite device.

Clearly, this shares many disadvantages with the bubble humidifier. There is going to be an obvious dependence on flow, i.e. the higher the flow rate and tidal volume the less efficient the humidifier. This is because without bubbles, the surface of the water pot is not large enough to be an efficient surface for water evaporation. One way to get around this is to introduce a wick, which sits in the water and ends up with all its tiny pores coated with water. The surface area of the gas-water interface is greatly increased by this.

Another wickless method of humidification is to use a hydrophobic membrane. This method relies on the fact that the membrane is hydrophobic and therefore will not permit migration of water droplets – only molecular water vapour. Hannsler et al (1992) described the use of a system which used several membrane layers with 10 Angstrom size pores. The membrane, by having tiny pores, also ends up acting as a bacterial filter (though one supposes there is nothing stopping the opposite side of the membrane from becoming contaminated. Obviously there is still going to be a flow dependent problem: the surface area is still only pot-sized, and on top of that there is an increase in the resistance to water flow (proportional to the thickness and permeability of the membrane). Hannsler’s group tested these devices in neonatal ventilation, using flow rates ranging from 4 to 16L/min.

Obviously, all these devices give the impression that their relatively small surface area will render them vulnerable to underperforming at high flow rates. The answer to this may be to increase the efficiency of evaporation by using a counter-current gas flow circuit. Water is heated and drizzled lightly over an evaporator grate which increases the surface area. Gas is pumped from beneath, moving counter to the water’s current. The water which is not evaporated is collected on the bottom of the chamber and recycled.

The idea was that counter-current exchange of water molecules with the gas would be so efficient that gas flow could vary over a wide range but humidification would remain stable (namely, stable at 100%). Schumann et al (2007) were able to demonstrate that these models perform exactly in that way – whether the flow was 3L/min or 120L/min, the total moisture deliver per respiratory cycle remained around 33mg/L (700ml tidal volumes). Unfortunately, Schumann et al also demonstrated that conventional pass-over models also were unaffected by changing the flow rate. The pass-over models ended up humidifying the gas mixture at a slightly less efficient rate only at high minute volumes, where they delivered only 30mg/cycle – a difference which reached statistical significance but is probably clinically meaningless. The design is additionally more expensive and cumbersome because to recycle the water which collects at the bottom of the chamber this device has to use an electrical pump, pumping it back to the top.

These seem to be virtually unknown, and there is little literature on their use since 2011, when Tiffin et al (2011) described their use in the setting of high-frequency oscillatory ventilation. The weird circuits required by these machines do not permit the attachment of conventional humidifiers and require an in-line system. Moreover, the high bias flow of the circuits (30L or so) tend to make normal humidifiers ineffective. 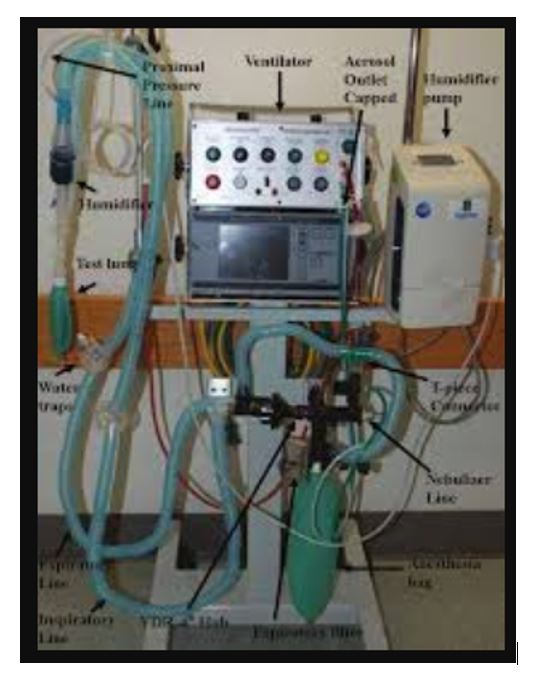 There appears to be only one company making these (Hydrate Inc., who make the Hydrate OMNI™) and their supporting literature consists mainly of abstracts and posters from conferences. The device itself is a peristaltic pump drives water into the heater capsule, which then passes it through a ceramic disk full of capillary channels and into range of a small heating disk, which blasts the water in the capillaries with such fierce heat that the jet of steam squirts out of the device and into the respiratory gas mixture.

It’s the ultimate way of divorcing the water vapour flow rate from the ventilator circuit flow rate. You let the ventilator blow as much as it wants and you just add whatever amount of hot steam you need, on demand. The limits really become related to the rate at which you can deliver water vapour to the heating element. This specific model can apparently humidify gas flows up to 40L/min.

This method should be mentioned as a legitimate means for increasing the humidity of inspired gases, largely  because of its major advantage: it disconnects the temperature of the gas from its humidity. By filling the inspiratory gas mixture with nanoscale water particles (smaller than an aerosol) the ultrasonic nebuliser can double the water content of the inhaled gas mixture. Klein et al (1973) found that this does not need to produce any sort of visible fog.

Williams, Robin, et al. "Relationship between the humidity and temperature of inspired gas and the function of the airway mucosa." Critical care medicine 24.11 (1996): 1920-1929.