This chapter addresses the origins of one of the most important variables in mechanical ventilation, that being the positive airway pressure. Much prattle carries on in the literature as to how this variable is to be manipulated for the greater benefit of the patient, particularly in ARDS where it appears to be critically associated with survival. As such, it seems important to discuss the methods of generating positive circuit pressure in mechanical ventilation. This aligns loosely with one of the Performance Criteria in the CICM WCA document (“Ventilation”), where a trainee “outlines the methods by which PEEP may be applied”, which presumably extends to the application of positive airway pressure in general.

A brief outline of methods would consist of the following points:

In order for pressure to be generated in the ventilator circuit, there must be some resistance to flow (pressure = flow × resistance). The patient’s own respiratory system obviously offers some resistance, but generally, this is neither reliable nor controllable. Ergo, other (better behaved) resistors must be placed in the path of expiratory gas flow, in order for the intensivist to have some control over the positive pressure in the circuit. There is a range of such resistors, and they vary in the degree of control they offer.

Leak as a means of controlling positive airway pressure

This is probably the most primitive means of maintaining positive circuit pressure. The circuit is set to some gas flow rate, and directs that flow into the respiratory system of the patient. Because the flow rate may be quite high (tens of litres per minute) the system is quite obviously open (otherwise the patient would explode). The gas escapes by means of some leak around the interface between the patient and the circuit. The size of the gap through which the leak occurs represents the uncontrollable and unpredictable resistor which generates positive airway pressure.

This is the principle which is responsible for the PEEP generated by high flow nasal prong oxygen. Groves & Tobin (2007) were able to demonstrate very effectively that the PEEP being generated by these devices was dependent on the size of the leak-producing orifice. With their mouths open, the volunteers recorded much lower levels of PEEP because the gas was free to escape. With their mouths closed, the PEEP was much higher – and higher yet again in female volunteers, whose nares were of a smaller diameter than the males. The snug fit of the nasal cannulae in these ladies generated a sizeable PEEP by increasing the resistance to the leak of gas. By comparison, the monstrously huge male nares were substantially leakier, and produced less PEEP.

This is the next most primitive method of generating positive airway pressure. It requires minimal moving parts or maintenance and therefore represents the most basic way of exerting any sort of control over the positive pressure in the circuit, short of using the actual patient anatomy as a PEEP valve. 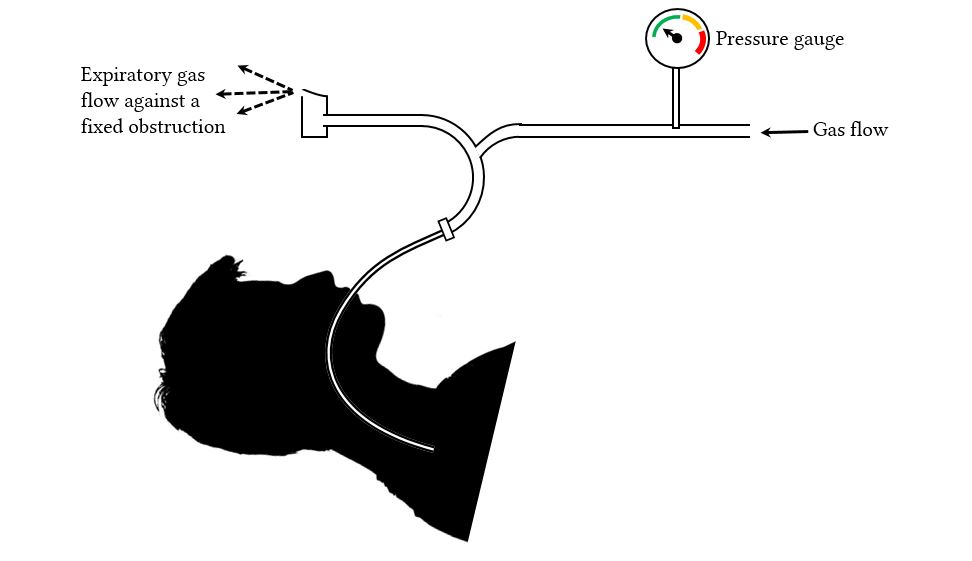 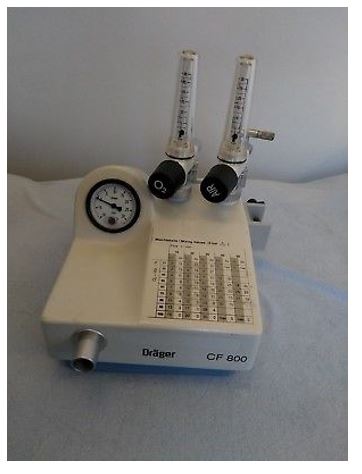 This method is still in use, including otherwise well-financed “first world” establishments, mainly because of the fact that a piece of medical equipment literally needs to fall down a flight of stairs before anybody might consider replacing it. The Drager CF 800 is one such device. A used model might go for around 600 Euro on the grey market. They last well into the second and third decade of their life (far outlasting more complex ventilators) because they are incredibly robust, like the Kalashnikov AK-47 of the ventilator world. One model might get dropped, knocked over, rammed with a hospital bed and kicked by an angry grieving unkle, and still it functions normally because it is constructed of simple solid parts with minimum frills.

The Drager device is composed of a gas blender, reservoir bellows and pressure gauge. An external PEEP valve is attached to this device, and this regulates the pressure. If one wishes to maintain the same flow rate, one may adjust the PEEP by swapping in valves until the desired pressure is achieved. Alternatively, one may keep the same valve, and increase the total gas flow rate. The ultimate outcome would be the same. The valve is cheap, plastic, non-sterile, and all models ultimately look something like this: 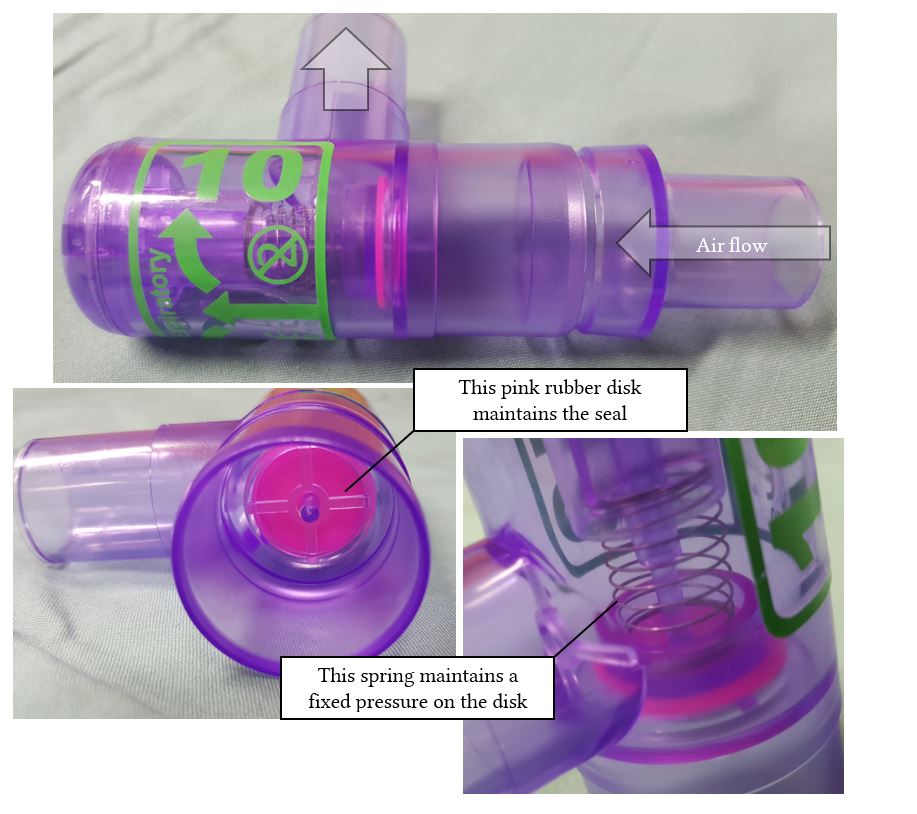 The valves are colourful and (most importantly) unambiguous. International connector sizes make it impossible to connect this valve to the circuit in any way other than the intended manner. The large numbers on these valves tend to make it obvious what the intended PEEP is.

Characteristics and known properties of contemporarily available PEEP valve technologies were assessed by Kayaleh et al (1988).  Though the passages for gas flow through some of these valves may be quite tortuous, they surprisingly offer minimal resistance to air flow. The resistance profile tends to change with the respiratory cycle and flow rate. In short, it takes less effort to deform the valve when it is already open, and so at low flows the diaphragm is more resistant than at high flows. Moreover, when the flow is really high, the valve’s other (post-diaphragm) components contribute to the resistance. And it is probably impossible to guess how each valve will perform at any given circumstance. In short, the number on the side is far from an exact setting.

Having derided spring-and-diaphragm PEEP valves as inherently inaccurate, it is ironic to move on to a valve system which gives its user the impression that they have precise control over the PEEP value. However, that is wwhat you get with the adjustable variety of expiratory valves.

From the very appearance of this thing, it becomes fairly obvious how it works. The helpful illustration of its internal gubbins here (from US patent US8534283B2 ) is mainly to demonstrate that it contains inside it a couple of springs, which put pressure on a rubbery disk which obstructs the expiratory outlet. 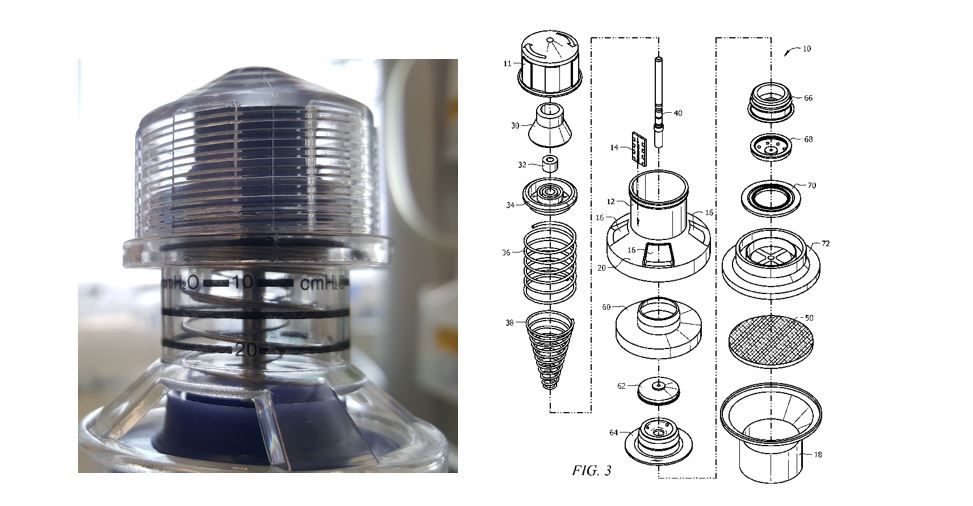 By screwing and unscrewing the cap on the valve, the operator may compress the spring, thereby adjusting the amount of pressure applied to the rubbery disk. Classically, these are used to provide PEEP in scenarios where a) the actual level is not particularly important, and where b) there is no room for a bucket or ventilator rig. This method of providing PEEP is probably the most portable and convenient.

This thing is described here purely as a means of illustrating the concept of a variable resistor. It is a historical footnote – these days there are much cheaper and more effective methods of generating positive end-expiratory pressure. However, it is important to acknowledge the contribution of these systems to the early development of mechanical ventilator equipment. 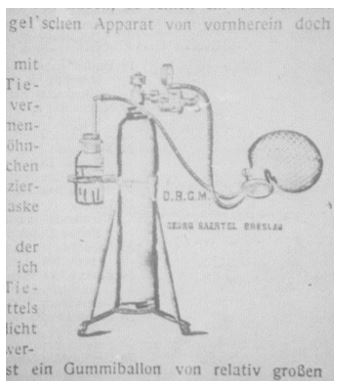 is was actually the design of the first CPAP device as described by August Ritter von Reuss in 1914, for the management of respiratory failure in the newborn. Over a hundred years later even the highly motivated copyright pirate would not be able to find an original copy (or even the 1921 English translation) but some authors were obviously better resourced, and reproduce grainy images of the device in their articles. The one from P.M. Dunn (1990) is reproduced here with no permission whatsoever. The drawing represents an upright oxygen cylinder attached to some sort of sack-like reservoir which doubles as the mask. A tight-fitted rubber ring would be used to keep this thing in place over the infant’s face. The water bottle mounted on the side of the cylinder provided the needed PEEP; “a water pressure regulator…. This consists of a simple metal tube that is placed in a receptacle filled with water and provided with a centimetre scale. According to the depth of immersion of the metal tube the pressure can be varied in the whole system to a desired point”. Though the words “primitive” were used to describe this technique, one can still find it being used in neonatal centres, and published about (Koti et al, 2010). People are even devising biphasic versions which cleverly switch pressures to provide inspiratory pressure support (John et al, 2018).

These valves, otherwise known as “active” valves, produce resistance dynamically during a breath, so that the resistance changes over the course of the breath cycle. By a combination of changing inspiratory flow and expiratory resistance, the pressure in the circuit can be cleverly manipulated to increase, decrease, or stay the same. Of these, the latter is of greatest interest, because it permits pressure control modes of ventilation to be implemented.

At its most basic level, this thing is essentially a piston which puts a variable amount of pressure on something blocking the expiratory opening. How much pressure is applied at any given moment is controlled by a microprocessor, and most such valves can vary the pressure rapidly (over one or two millisecond timeframes). 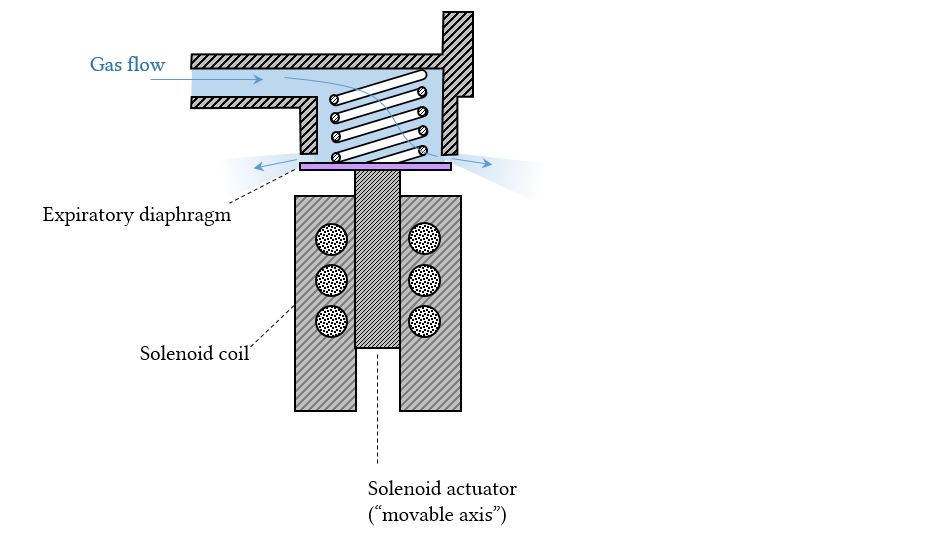 These generally come in two parts. There is usually a replaceable diaphragm-like component and a (less easily replaceable) solenoid coil which affects the diaphragm. The solenoid coil can produce an effect on the valve by moving the “movable axis” component. Below, one can see the diagrams from the Maquet SERVO-i service manual. The diaphragm is mounted into the bottom of the  “expiratory cassette”, a module which can be removed from the ventilator to undergo cleaning or service. The more delicate solenoid coil remains below, in the ventilator housing where it  (and all the delicate electro-guts of the ventilator) are safe from the rancid puke-gas exhaled by your patient. 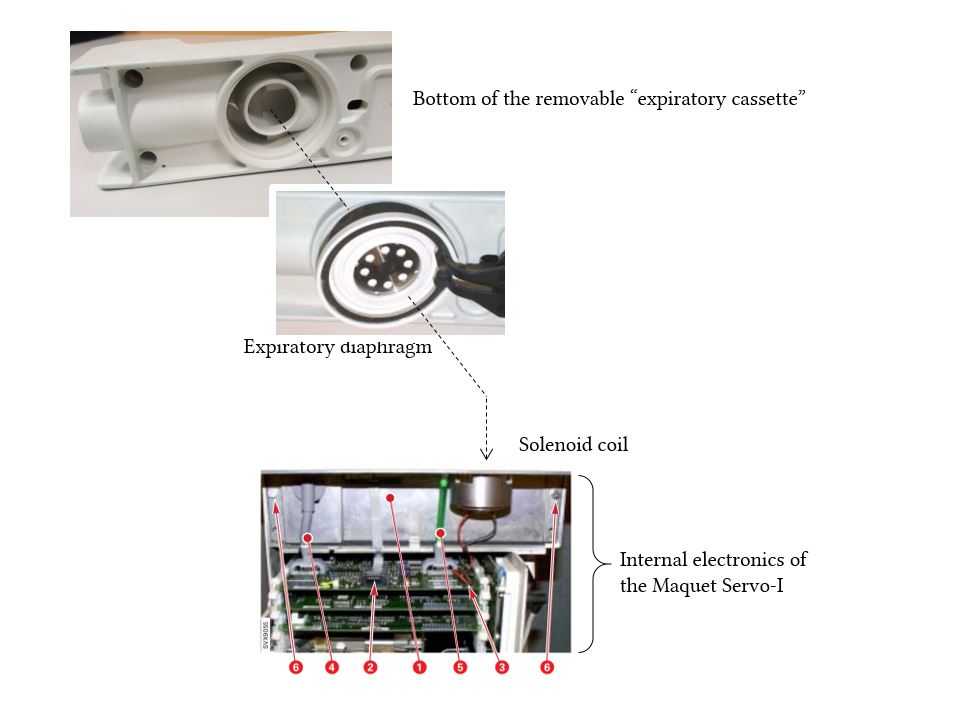 Active expiratory valves, though more sophisticated than simple water and diaphragm valves, are not without their problems. The most important of these are related to the way they respond to the pressure changes in the rapidly shifting dynamic environment of the respiratory failure patient.

Jiao et al (2008) performed a bench study to determine the characteristics of some of the more commonly available valves. Sure, that was over ten years ago, but let’s face it -  most of us are currently using ventilators which are older than that. Anyway: there were some performance limitations. Of these, probably the most relevant is pressure overshoot. occurred when there was expiratory effort: the valve did not open in time to adjust for the increase in circuit pressure. Transiently, some airway pressure increases of up to 5.5 cm H2O were seen, which is still not very much. This limitation probably has clinical relevance in patients who are severely dyssynchronous and tachypnoeic, where exhaling forcibly against the stupid valve will contribute to their increased work of breathing. There is also the phenomenon of pressure undershoot, where after forced expiration the pressure remains low for too long (i.e. the ventilator does not reestablish the prescribed PEEP fast enough) but this is generally not held to be a particularly significant limitation.

A few other limitations need to be mentioned: