It is widely accepted that the safe use of a mechanical ventilator should be accompanied by the intensivist obsessing over various parameters of respiratory function. This naturally leads to the conclusion that these parameters should be carefully and accurately monitored. Moreover, if one is going to obsess over such variables, one should probably appreciate the methods used to monitor them, and the limitations of these methods. How else can a person find those numbers believable? The college obviously also appreciate this, because they expect a trainee who “describes the means by which the ventilator measures pressure and flow” to at least an “acceptable” level, according to the CICM WCA document “Ventilation”.

This chapter explores the monitoring of pressure and flow. The mechanical ventilator usually also measures the concentration of oxygen, and this is also discussed here, even though it is not mentioned in the WCA. Though the monitoring of end-tidal CO2  has become routine in ICU, it is something usually performed through stand-alone monitor modules integrated into the monitoring equipment and is therefore (totally arbitrarily) discussed in a separate section.

The best single resource for this purpose is probably Warren Sanborn’s article from 2005, which remains current and relevant because the technology has not moved on significantly in these basic matters (and moreover, one usually finds oneself in a department full of vintage ventilators).

Pressure is probably the cheapest and most accurate variable to monitor.

Back in the day, the ventilators would have used an aneroid manometer to measure circuit pressure, which was a hideous thing to behold. An aneroid manometer is basically an evacuated chamber with a flexible lid on top of it. The deformation of the lid gives rise to some measurable change in the manometer. This might be a change in the electrical conductivity/resistance, or perhaps just the mechanical displacement of a lever which is then reproduced on an analog scale. Of the latter, the most common is probably a Bourdon gauge, which is a coiled elastic tube to which a needle is coupled: as the pressure inside the tube increases it tries to straighten, changing the position of the needle (usually via a system of gears). The model depicted below uses a bellows instead, but the principle is the same. It is from a sphygmomanometer (reproduced here with no permission whatsoever, via a Google search, from this textbook of blood pressure measurement equipment. 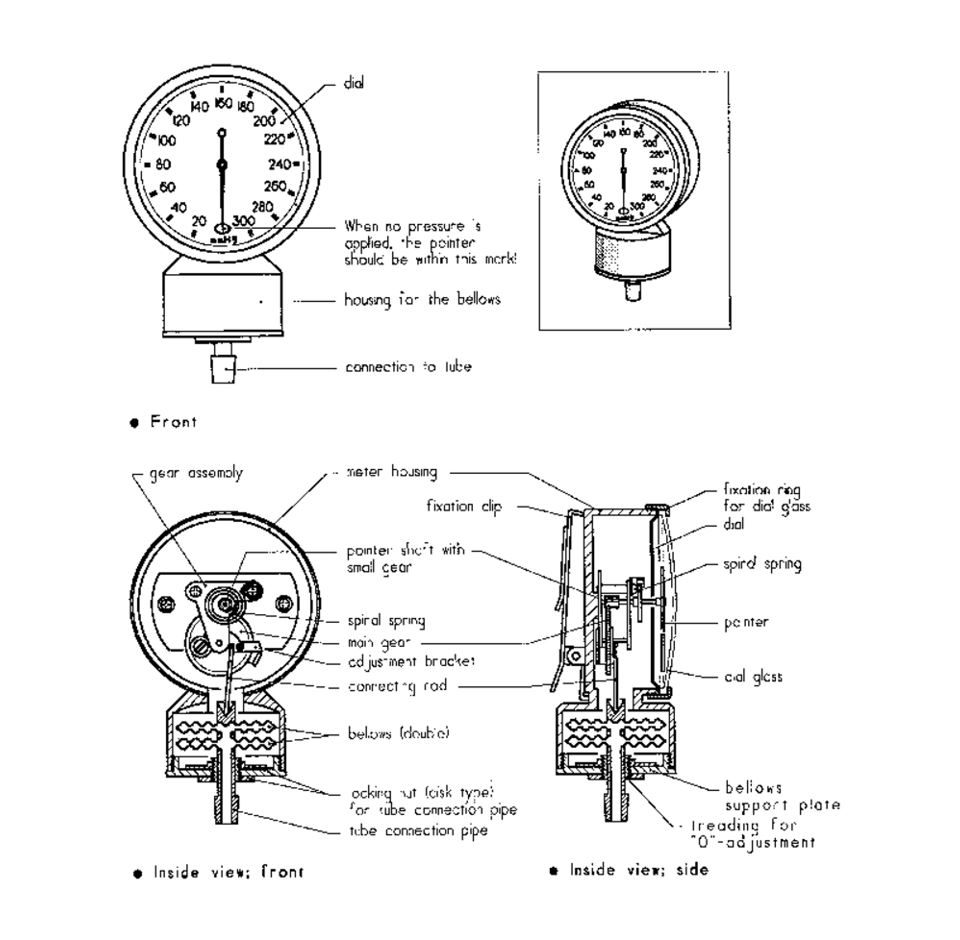 Obviously, there was a problem with this sort of thing. For one, the aneroid diaphragm takes some time to become displaced, and the gears/needle mechanism take some time to respond to a stimulus. As a result, the aneroid manometer has low frequency response: it will not detect brief changes in pressure, and it will react slowly when changes occur. Another issue is the fragility of the apparatus: as anything which depends on a physical deformation of a membrane, there is the possibility that with excess pressure the manometer chamber will burst. This is probably less of an issue with respiratory equipment (the patient will burst first) but in blood pressure measurement the upper pressure limit of the sphygmomanometer was limited to about 300 mmHg, beyond which point the bellows would become permanently deformed and inoperable. Manufacturers remain attached to 300mm Hg as a limit for their blood pressure monitoring devices, because though the silicon strain gauge will not become permanently deformed and inoperable at such pressure, the patient’s circulation certainly will; to say nothing of the lack of meaningful clinical difference between a systolic pressure of 350mmHg and 400mmHg.

These days, most pressure transducers inside mechanical ventilation equipment are of the electrical strain gauge type. Most of them are variable inductance or strain gauge transducers. Variable capacitance transducers do exist, but are generally too large and bulky to be used in mechanical ventilator equipment. Variable inductance transducers measure the deformation of a diaphragm which is placed between two induction coils (the diaphragm’s inductance changes in proportion to the extent of deformation, and therefore pressure). Strain gauges measure the resistance change in some component of the diaphragm, which changes the current through the circuit (Wheatstone bridge transducers are an example of this).

Generally, strain gauges are cheap and numerous. One can find them in lots of 10 for US$5.95 on AliBaba.com. Unfortunately, that comes at the cost of accuracy. Sanborn mentions that most models were accurate to +/- 4% of the measured value, which is probably good enough for government work. If you were ventilation somebody with peak airway pressures of 40, you’d be only mildly annoyed to be wrong by 1.6 cm H2O.  The range of measurement within which this accuracy is maintained is usually well in excess of what the ventilator is ever likely to generate. For example, the Servo-i expiratory pressure sensors are calibrated for a range between -40 and 160 cm H2O. The service manual helpfully suggests that one stay under 400 cmH2O, as this might break the sensor.

Monitoring of flow by mechanical ventilators can be performed by a variety of different instruments. Not to waste the trainee’s time, one needs to mention at this stage that the majority of these designs are obsolete. These days the measurement of flow in a newish 21st-century mechanical ventilator is performed by means of an ultrasonic sensor array, and so some might argue that it is pointless to discuss the other methods. The modern ICU trainee is unlikely to ever be expected to know even the names of these mechanisms, let alone their principles of action or performance characteristics. For completeness, they are covered here briefly. For incompleteness, only the best known or most used models are covered. According to Schena et al (2015), there are over 100 commercially available models of flow measurement device, “with a mode of operation based on almost any physical domain”. 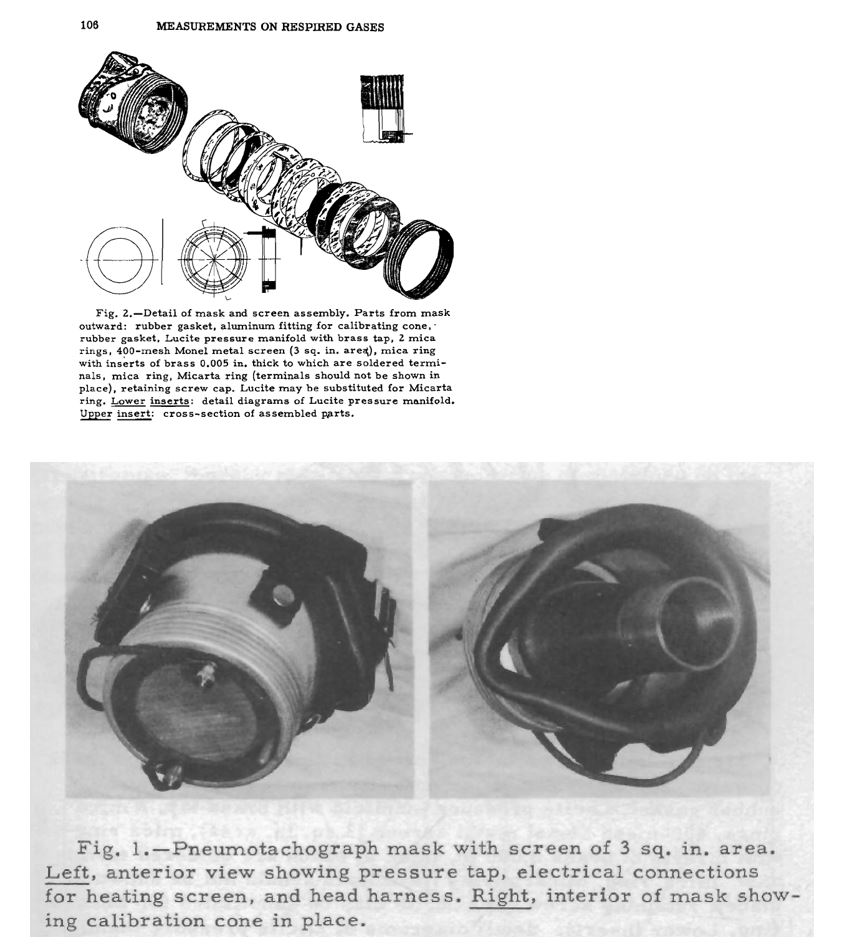 Though it contributes nothing to their understanding of the principles involved, the reader is invited to marvel at the flow sensor unit which was reclaimed from a defunctioned Maquet Servo-I ventilator. 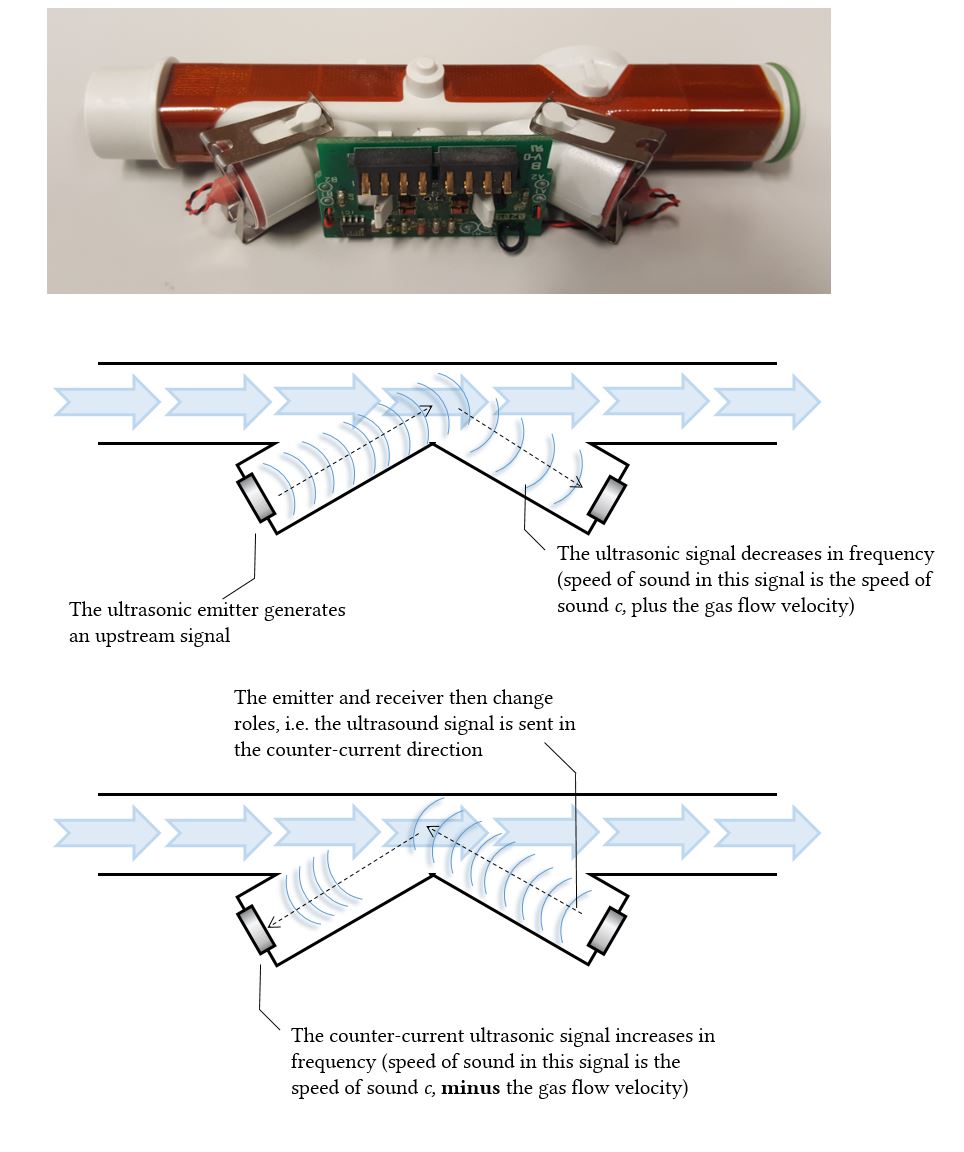 Without going into an excessive amount of mathematics (which is in any case available in the  article by Schena et al, 2015)  it is possible to say that the velocity of the gas flowing through the tube influences the propagation of sound waves in that gas in the same way as the movement of the sound emitter might do in stationary gas (think of the Doppler effect created by the noise of a car's engine when it moves towards and then away from you). Knowing the original frequency, one is then able to measure the change in frequency and from this calculate the flow rate of the gas.

These devices obviously have some limitations, not the least of which is their reliance on the constant physical properties of the gas being blow through them. In ICU, this sort of constancy cannot be taken for granted. For instance, one might use any oxygen concentration ranging from 21% to 100%, or weird gas mixtures like Heliox. In general, the transmission of ultrasound through gases is an inefficient process. Their main advantages are their absence of moving parts and mechanical resilience, which makes them easy to clean between patients. They also do not impede expiratory flow in any way.

The following summary table adopted from Schena et al (2015) is a reasonable summary of the advantages and disadvantages of the different designs:

Given that we and our unconscious patients entrust these devices to produce a reliable oxygen concentration, it would make sense to somehow integrate internal quality controls to make sure that your prescribed FiO2 is indeed the F of O2 which is …i. Thus, in most modern ventilators, some sort of feedback mechanism exists which monitors the inspired oxygen concentration and relates it to the proportioning valve in a feedback loop. Here is a selection of examples among such monitors, from Hamilton Medical.  Govoni et al (2012) tested oxygen sensors from Drager and Maquet and found that these devices are generally accurate  to around 1% FiO2, which is accurate enough in terms of ICU oxygen titration (realistically, we very rarely change settings unless it is by at least 5% anyway).

It is somewhat difficult to find good articles on this precise topic. Chatburn and Mireles-Cabodevila (in Tobin’s, 3 rd ed) mentions oxygen sensors in two lines of text, and references another textbook (Clinical Anesthesia by Barash et al, 2009). They give no page number, and in any case, the author only has access to the old 2006 edition, but there under “Inspiratory and expiratory gas monitoring” one can find a short section about different sorts of oxygen sensors. To paraphrase, there are three main types:

Of these, all are generally fairly slow. Diffusion and redox reactions take time, and the blood gas analyser can afford to wait, whereas the ventilator cannot. Usually, the acceptable delay is around 2-10 seconds, according to the obsolete edition of Clinical Anaesthesia.