Contrary to popular delusion, there are differences between positive airway pressure, positive end-expiratory pressure (PEEP) and CPAP. These terms are not interchangeable and their misuse tends to enrage the ventilation pedant. Once the important distinction between them is well understood, the shared features of these concepts can be explored together. This exploration fits loosely around the CICM Part I syllabus document, where Section F10(i) asks the exam candidates to “describe the physiological consequences of intermittent positive pressure ventilation and positive end-expiratory pressure”. As those physiological consequences correlate closely with mean airway pressure and mean airway pressure correlates closely with PEEP, one can draw some sort of connection between the exams and this content. For the purposes of revision, the time-poor candidate can safely ignore the references and limit their reading to the contents of the grey box below.

As far as published literature on the subject goes, one could not write anything without at some stage mentioning the two articles from 1992 by John Marini and Sue Ravenscraft. Part I deals with the maths of determining mean airway pressure, and Part II with the significance of this variable. M.J Harrison (1986) offers a discussion of how PEEP and CPAP are different (and similar). Definitions of these terms generally remains unchanged since they were first crafted by the Joint Committee on Pulmonary Nomenclature in 1975.  As for the rest of this stuff, most of it is found in basic textbooks, and does not vary dramatically between authors. One may be equally well served by the BASIC manual, Hess’ Essentials of Mechanical Ventilation (p.132 of the 3rd edition), Egan’s Fundamentals of Respiratory Care (p. 974 of the 8th edition) or whatever else you’ve got laying around. Of the officially recommended CICM texts, Nunn’s Applied Respiratory Physiology (8th ed, p.464-465) touches only briefly on these matters, and likely represents the minimum expected knowledge on this topic.

The tradition of measuring respiratory pressure in terms of water rather than mercury does not appear to have a well-reasoned origin. It may seem to be associated with the use of the bubble PEEP valve (where a positive end-expiratory pressure is generated by submerging the end of the circuit in a tub of water), but the use of water in descriptions of respiratory pressures actually seems to pre-date even this ancient device.  Some textbooks (eg. Rhoades & Bell, 4th ed., 2012, p.330)   suggest that the respiratory pressure changes are so small that their measurement technique requires a factor-of-ten increase in scale in order to generate conveniently large changes. If one finds oneself measuring a pleural pressure from a mercury manometer, a change in height of 0.37 mm is much less visible to the naked eye than a change of  0.5 cm H2O.

This is not a good argument, as a sane person would immediately object to it.  Long gone are the days when physiologists would need to squint at menisci in graduated cylinders; this is the era of electronic pressure measurement. The modern intensivist is not at all inconvenienced by small numbers.  In any case there is a conceivable range of inconveniently small numbers no matter what liquid is in your manometer, and if convenience was the real issue one could point to the inconvenience of comparing water pressure measurements with mercury measurements of practically every other pressure variable in physiology (gas partial pressure, blood pressure, intracranial pressure, and so on).

So, with the normal" atmospheric pressure of 760 mm Hg, one's entire native respiratory circuit is under 10 metres of water pressure. Similarly, 10 metres below the surface of the sea one's lung experiences an extra 1 atmosphere of pressure, and with deeper submersion, the pressure increases by 1 atmosphere for every 10 metres. Thus, we ventilate our patients with pressure differences which are minute in comparison to the total pressures in play in the environment around them, or even to the pressures in their own cardiovascular system. 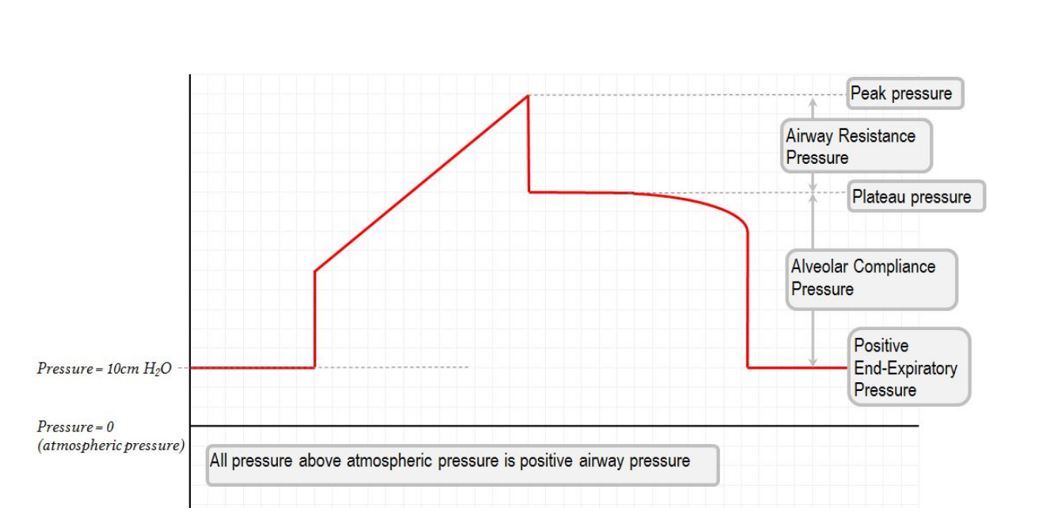 The shape of the pressure waveform is a luxurious banquet of physiological information, and its interpretation is discussed elsewhere. For now, the discussion will be limited to the concepts of PEEP, CPAP, positive airway pressure and mean airway pressure.

Positive pressure is not PEEP.

But PEEP is positive pressure.

In short, positive pressure is a physical variable which we manipulate to change the gradient of gas flow into (and out of) the patient's lung.  PEEP, on the other hand, is Positive End Expiratory Pressure. It is a variable of the 4th phase of ventilation - the pressure at the end of expiration. For a brief precise statement, one may quote the Joint Committee on Pulmonary Nomenclature of the American Thoracic Society and the American College of Chest Physicians (1975), who defined PEEP as

"a residual pressure above atmospheric maintained at the airway opening at the end of expiration”.

CPAP is not PEEP.

CPAP is a mode of ventilation consisting of Continuous Positive Airway Pressure. It is not PEEP, because PEEP is a phase variable of ventilation. CPAP incorporates PEEP (strictly speaking)  because at the end of a CPAP breath there is end-expiratory pressure; however CPAP is not synonymous with PEEP, and the two terms cannot be used interchangeably.

One might argue that in any ventilator mode the presence of any PEEP above zero classifies the ventilation as CPAP.  Because throughout the respiratory cycle the pressure in the respiratory circuit is continuously above atmospheric, the circuit can be said to be under Continuous Positive Airway Pressure. This is technically correct, but nonetheless confusing. Literary convention has left the two concepts distinct. When discussed in literature, CPAP typically implies a mode of ventilation where the ventilator does not cycle in inspiration, offering only one level of pressure.

In summary, CPAP is a mode of ventilation in which triggering is disabled and the entire respiratory cycle is exposed to a uniform pressure from the ventilator, which corresponds to the PEEP setting. The actual respiratory circuit pressure will vary throughout the cycle because the patient will generate a negative pressure to inhale a breath, and a positive pressure to exhale; but at the end of the breath the pressure will revert to the PEEP setting.

CPAP as a mode of ventilation (along with its advantages and disadvantages) is discussed elsewhere in these chapters.

Mean airway pressure is a fairly descriptive and accurate term. Whenever one finds reference to this variable, it is usually defined as:

That comes from Park et al (2016) and Pesenti et al (1985). Basically, one takes the entire respiratory cycle, measures the pressure at regular time points along the whole cycle, then divides the measured pressure by the number of time points. One might even use something like the area under the pressure/time curve.

In most circumstances, because 60-70% of the respiratory cycle is usually spent on not breathing (i.e. at PEEP), the mean airway pressure is relatively close to PEEP.

Mean airway pressure is affected by many variables in mechanical ventilation:

This relationship breaks down when there is severe bronchospasm.