Though dynamic hyperinflation and intrinsic PEEP are not mentioned in the CICM Primary Syllabus document (2017), there is the expectation that the mid-program trainee "demonstrates methods to measure iPEEP" in the college WCA document "Ventilation". From this, one may infer that the college also expects their trainees to have a sound understanding of what iPEEP is, how it develops, and what its consequences may be. One would certainly get that impression very late in one's training, where in the Part II exam multiple detailed questions ask about the diagnosis and management of intrinsic PEEP. At that stage, the trainees would probably be better served by a brief point-form summary for the purposes of revision, and this is available in the Required Reading section for the Part II exam.

This is caused by

Major pathophysiological contributors to this are:

Major pathophysiological contributors to this are:

In terms of peer-reviewed sources, Laurent Brochard published an article in 2002 which subsequently became a chapter for Applied Physiology in Intensive Care Medicine (2006), which is somehow available for free via ESICM even though Springer paywalled the rest of the textbook. Another excellent resource is Blanch et al (2005), which is available for free.

Intrinsic PEEP has many synonyms, including autoPEEP (Pepe et al, 1982),  iPEEP and PEEPi. Some people refer to this phenomenon as"dynamic hyperinflation", and others use this the term for the pathological process which produces intrinsic PEEP (whereas the intrinsic PEEP is just the increased intrathoracic pressure). It is occasionally referred to as "air trapping", or "gas trapping" presumably wherever you are trapping something other than air; that's what Norman Bergman originally called it when he first described it in 1972 . These terms appear to be used interchangeably in the literature and on this site. As far as is possible to tell, nobody feels strongly enough about this to demand that we use a single description for this phenomenon. Whatever you call it, it is defined as

"The increase in end-expiratory lung volume (EELV) that may occur in patients with airflow limitation when minute ventilation increases" - Agusti & Soriano, 2006

"when expiratory flow has not emptied alveoli to their resting FRC values by the end of exhalation... [intrinsic PEEP is] the residual positive pressure within the lungs referenced to atmospheric pressure or to PEEP" - Brander & Slutsky, 2012

In general, though many authors do seem to use the terms interchangeably, it would appear that dynamic hyperinflation and intrinsic PEEP are not synonymous. Authors who make that distinction usually point to the fact that dynamic hyperinflation implies a change in end-expiratory volume, whereas lung volumes may actually remain normal while pressure rises (eg. with vigorous expiratory muscle activity). It is therefore possible to be dynamically hyperinflated and have a relatively normal alveolar end-expiratory pressure, or to have wildly elevated pressure at relatively normal lung volumes. To be clear, both of these possibilities are probably pretty unlikely, and by the time the patient ends up in ICU the two phenomena become so confluent that the pragmatic intensivist would view them as a single clinical entity. It is also possible to develop auto-PEEP and hyperinflation without any airway flow limitation, in the presence of a sufficiently rapid respiratory rate; Bergman originally described the phenomenon in elective surgical patients being ventilated with excessively fast rates, none of whom had bronchospasm. 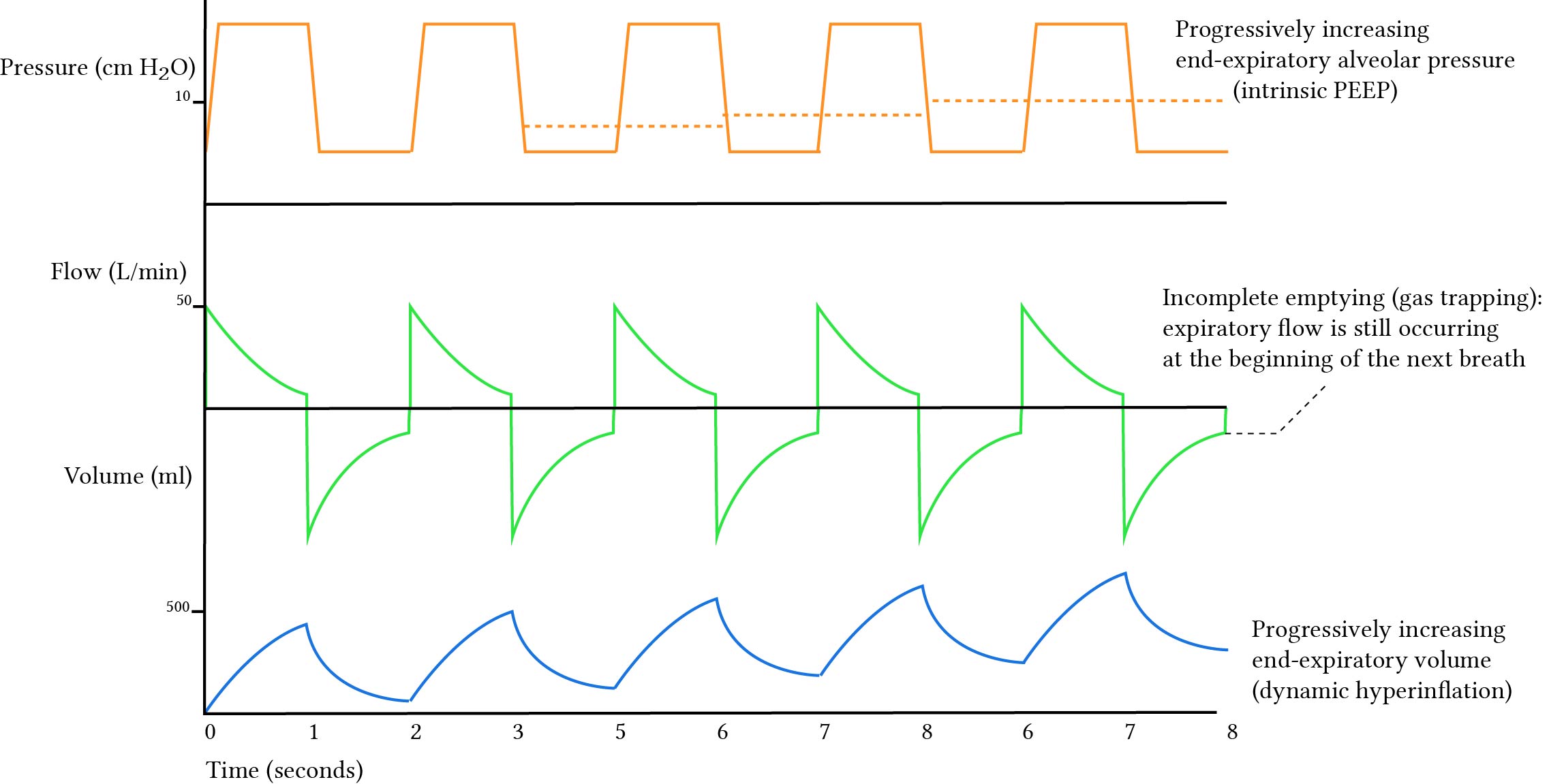 The main pathophysiological factors involved in this process are an insufficient time to return to FRC and dynamic collapse of the airways.

If there is not enough time to get back to FRC, dynamic hyperinflation and intrinsic PEEP will occur. This might be because the airways are very obstructed and the expiratory flow rate is very slow, or it might happen with a normal expiratory flow rate where the respiratory rate is so fast that the alveoli don't get time to empty.

When the pressure of alveolar gas exceeds the compression pressure of the small airways, those airways can collapse. The gas becomes trapped. With each subsequent breath, more gas is entrained into the alveoli, and alveolar pressure increases, contributing to further airway collapse.

This is actually less important in severe asthmatics. Those small airways are muscular and resistant to compression, and besides that, they are young and their lung units still have some intrinsic elastic recoil, which resists hyperinflation. Lung interstitial tissue pulls the airways open, resisting pressure from surrounding alveoli. In contrast, in the COPD patient, all that tissue has burned away in cigarette smoke and in these people the dynamic collapse of the airways contributes more to the dynamic hyperinflation. There is probably no actual data to support this - it is something asserted by Ranieri et al (1993), who derive their information from a chapter of a defunct textbook rather than from direct experimental observation.

Firstly, it's still PEEP. It has all the benefits and problems of actual machine-generated PEEP. It is an end-expiratory positive pressure and therefore has some expiratory and haemodynamic consequences. These are discussed in full elsewhere. There is one specific and unique matter is the effect of intrinsic PEEP on work of breathing. 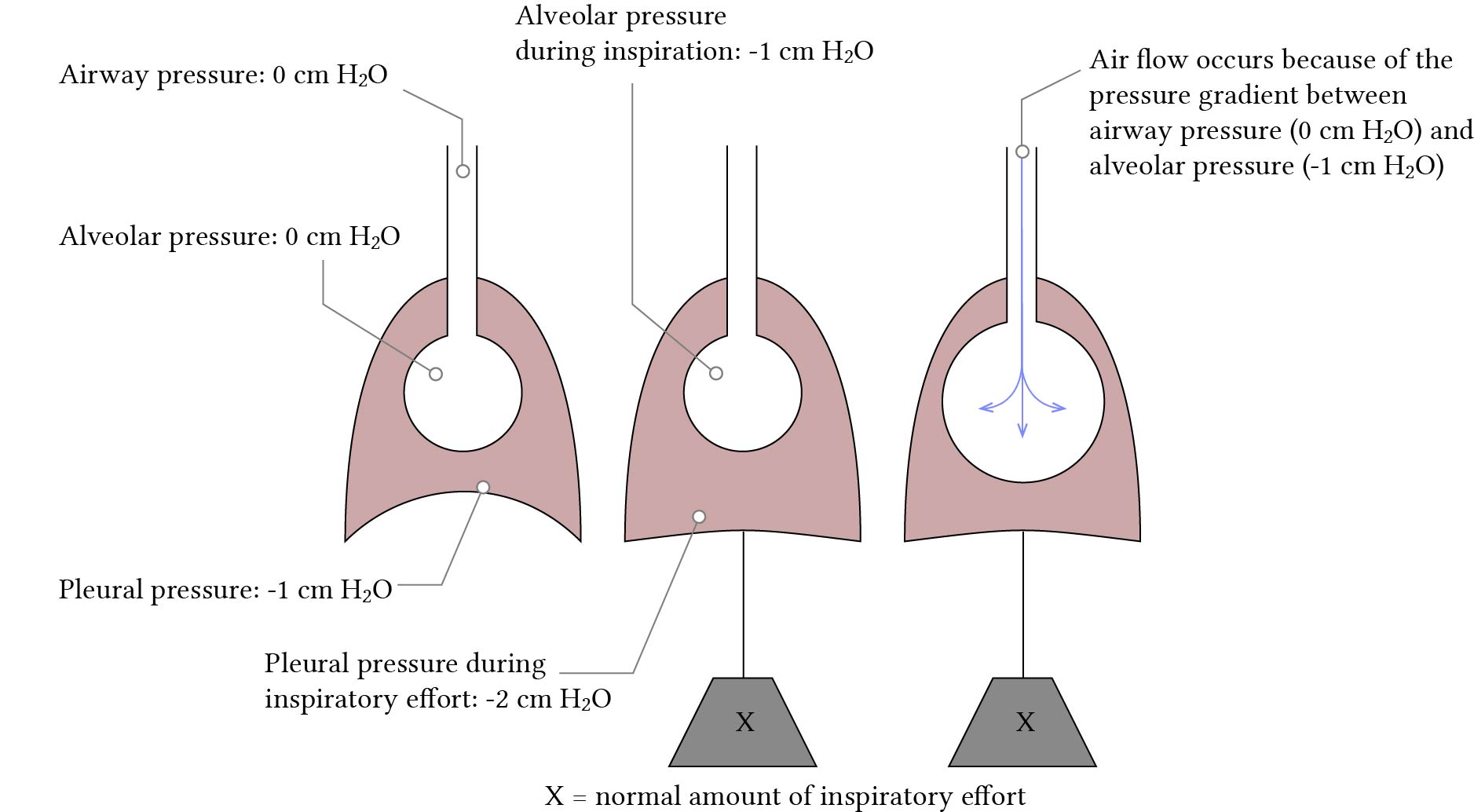 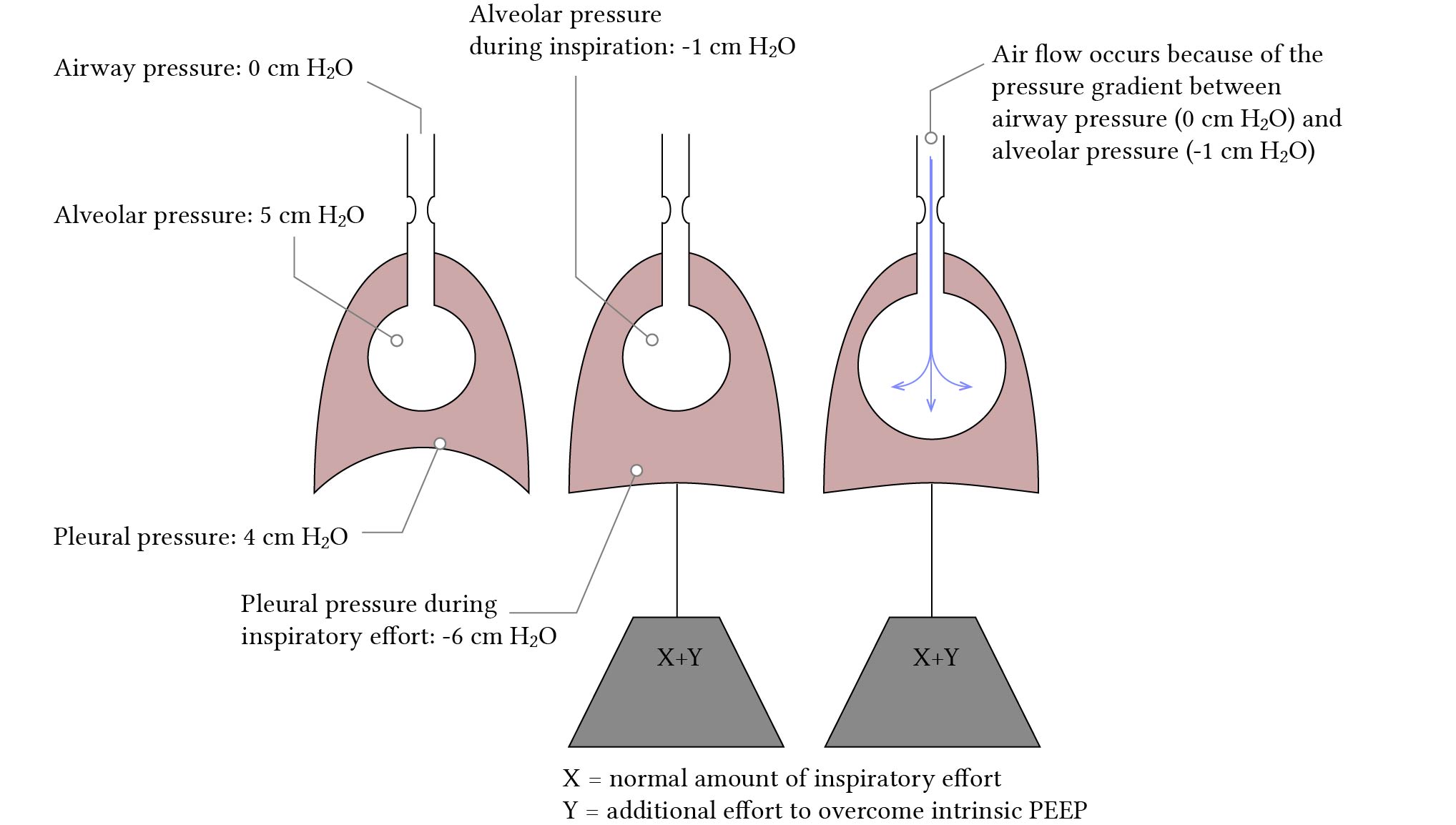 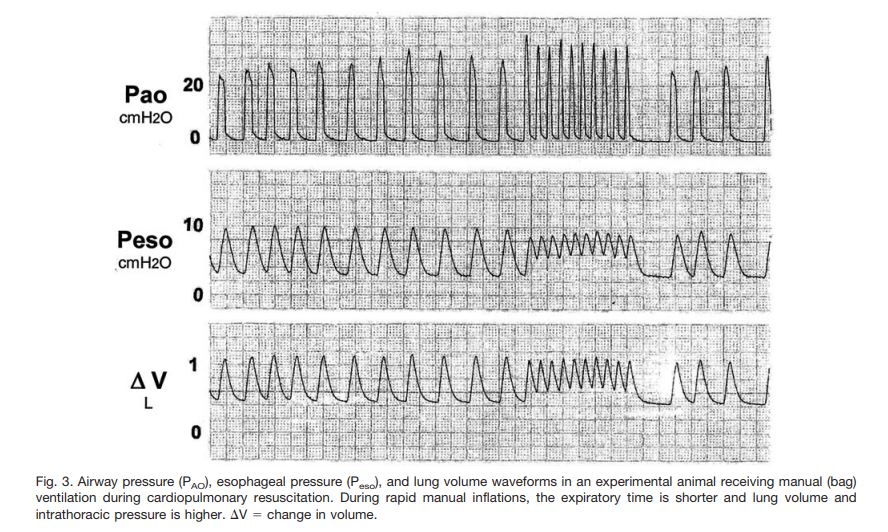 This has been demonstrated experimentally by oesophageal manometry in vivo. Blach et al (2005) had this diagram recorded from experimental animals being manually bag-ventilated. Here, "Peso" stands for oesophageal pressure, which is a reasonable surrogate for pleural pressure.  Notice how it increases during rapid manual ventilation.