Haemodynamic changes during a mechanical breath

This chapter is relevant to several parts of the 2017 CICM Primary Syllabus. It relates directly to  Section G7(iii), which asks the exam candidate to "describe the invasive and non-invasive measurement of blood pressure, including limitations and potential sources of error". Perhaps even more directly, it also relates to F10(i), which expects them to "describe the physiological consequences of intermittent positive pressure ventilation and positive end-expiratory pressure". Quite arbitrarily, the topic has been thrown into the Respiratory section to join all the other material on the effects of mechanical ventilation. It was perhaps quite safe to do so, as thus far none of these things have ever been questioned in the written paper, and therefore the revision value of this chapter is close to zero.

The substrate for this summary comes from an excellent article on this topic by Frédéric Michard and Jean-Louis Teboul, who explain these issues in a skilful and concise manner. Additionally, the diagrams were informed by the extensively quoted article by Morgan et al (1966), whose tracings of pressure waveforms seem to be reproduced extensively throughout the literature. Knowing the influence of positive pressure on cardiovascular physiology, one can usefully exploit these predictable mechanisms to make conclusions about the volume status of one's patient, and whether or not that patient might benefit from more volume. Specifically, the expiratory hold manoeuvre can be used to assess the fluid responsiveness of a shocked patient.

In homage to the early researchers, the pressure waveforms from Morgan et al (1966) are reproduced below from the grainy Ovid scan which for most people represents all that remains of the original paper. An additional distinction appears to be the fact that this is probably the first time somebody referred to the pulse pressure variation phenomenon as a "swing", a colloquialism which has propagated through the decades. 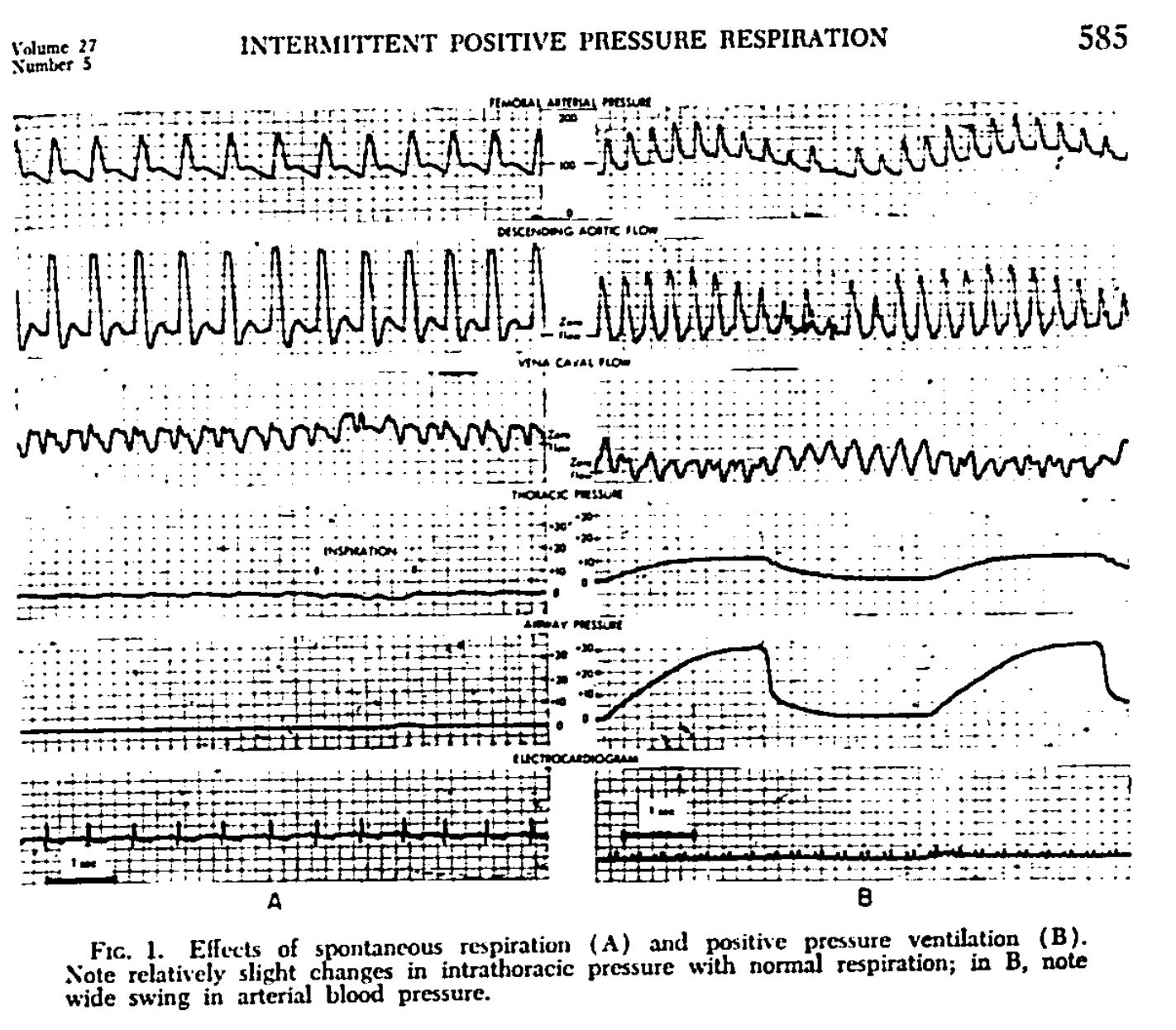 The experimenters ventilated large mongrel dogs using a Bird Mark 9X Respirator, which what appears to be a pressure-cycled mode.  The diagram demonstrates the experiments using a peak inspiratory pressure of 30 cm H2O, which produced the most impressive effects.

In order to understand these phenomena in greater detail, each chamber system needs to be considered separately.

This part of the system experiences increased load. Positive pressure ventilation impairs both the return of blood to the heart, and the ejection of blood through the pulmonary circulation.

Effects of positive pressure on the central veins and right atrium

The positive pressure in the chest decreases venous return by decreasing the effective central venous pressure and thereby decreases right ventricular preload. That may sound odd. In fact in the CVP measurement chapter the completely opposite is stated. How can both be true?

The CVP measurement certainly increases with increased PEEP. However, one must remember that our transducer tip is positioned in the SVC, and thus measures both the pressure inside the vein, and the pressure from the thoracic cavity which is transmitted to the transducer. The combination of these pressures is greater than the CVP alone; hence the measured CVP will appear to be higher. For a long time, this was viewed as a satisfying explanation. Indeed, this is the explanation offered in Tobin's Principles and Practice of Mechanical Ventilation (see Chapter 36 of the 2nd edition). However, more recently various brave explorers of the intrathoracic depths have revealed that the situation is far more complex. The pressure gradient between the extrathoracic and intrathoracic venous circulations may actually remain the same in some patients; however, the increased transmural pressure on the right ventricle impedes its filling, effectively reducing its preload. Furthermore, there may be situations when the SVC (or IVC) collapse under the effects of intrathoracic pressure, preventing further blood flow.

In summary, it would be more accurate to say that positive pressure ventilation increases measured CVP, but decreases the influence of central venous pressure on right ventricular preload.

Effects of positive pressure on the right ventricle

Not only is preload to the right ventricle decreased; the afterload is increased by whatever positive pressure is transmitted to the pulmonary arteries. This, of course, depends on what condition these arteries are, as well as on the integrity of the pulmonary valve - but let us not get carried away.

The bottom line is, the effect of positive pressure inspiration on the right ventricle decreases right ventricular stroke volume. The initial increase in positive pressure squeezes blood out of the pulmonary veins, like from a sponge. The sudden gush of blood into the left ventricle is the increased preload. And, as the aorta is under positive pressure, the left ventricular afterload is decreased, which probably does little for the LV stroke volume, but certainly decreases LV workload.