In mechanical ventilation, flow volume and pressure are the main variables which are susceptible to manipulation. They are all related and are(mostly) directly measured by the ventilator sensors. This chapter is a brief introduction to the meaning of these variables, which is necessary for the interpretation of ventilator waveforms. It is vaguely related to Sections F3(iv) and F3(vi)  from the 2017 CICM Primary Syllabus, which expect the exam candidates to "describe the pressure and volume relationships in the respiratory system" and "describe the pressure flow and flow volume relationships of the lung".

This topic has zero exam relevance, and it is not clear whether CICM have any interest in determining whether their trainees have grasped these concepts, at least where mechanical ventilation is concerned. The relationship between pressure and volume (i.e. lung compliance) is discussed in various abstract terms in several past paper questions, but it is never related to the function of the mechanical ventilator. Similarly, flow is mentioned in multiple Part I SAQs, but not as a product of mechanical ventilator function (those questions focused mainly on the factors which affect airway resistance). As such, for the purposes of preparing for the Part One exam, it would be reasonable to leave this chapter out of one’s revision.

If one were for some reason in need of this information, one might be spared the experience of reading the rest of the chapter by the following brief summary of salient points:

For the purpose of making quick soundbites, in these points, the relationships are massively oversimplified. For instance, it is easy to say that airway resistance is the pressure difference which drives flow, divided by the volumetric rate of flow. But it is also not completely accurate.  It is more accurate to qualify this statement by adding that resistance to airflow depends on whether the flow is laminar or turbulent, and that the dimensions of the airway play a significant role, and that the viscosity and density of the gas is a major determinant of resistance, and that depending on whether the flow is laminar or turbulent viscosity and density (respectively) play a more important role in determining resistance. But to complicate matters in this way would probably be pointless. Airflow resistance and respiratory compliance are discussed in greater detail elsewhere. This chapter focuses on the relationship of these concepts to mechanical ventilation and ventilator function.

Flow is volume delivered over time.

This is easily conceptualised. One needs to remember that when one describes flow, it is usually in terms of litres per minute, i.e units of volume per units of time. Though the operators manual might give one the impression that volume or pressure is somehow under one’s control, in reality, the mechanical ventilator is just a slightly more complex version of a leaf blower. It delivers gas flow, and the other variables are generated by manipulating and interacting with this flow.

In general, the ventilator will report flow as a waveform. The graphics depicted above are from a SERVO-i and a Puritan Bennett 840 model. As mentioned elsewhere, there are maximum values for the flow rate generated by these devices, but they are absurdly high (eg. the SERVO-i can blow 198 L/min if it absolutely has to).

The relationship of flow and volume

By rearranging the abovementioned equation, it is possible to derive volume from flow and time.

Though some early versions of mechanical ventilators delivered fixed volumes (eg. the piston design), most modern machines are flow regulators, and calculate volume from the rate of flow and the time over which that flow is delivered. 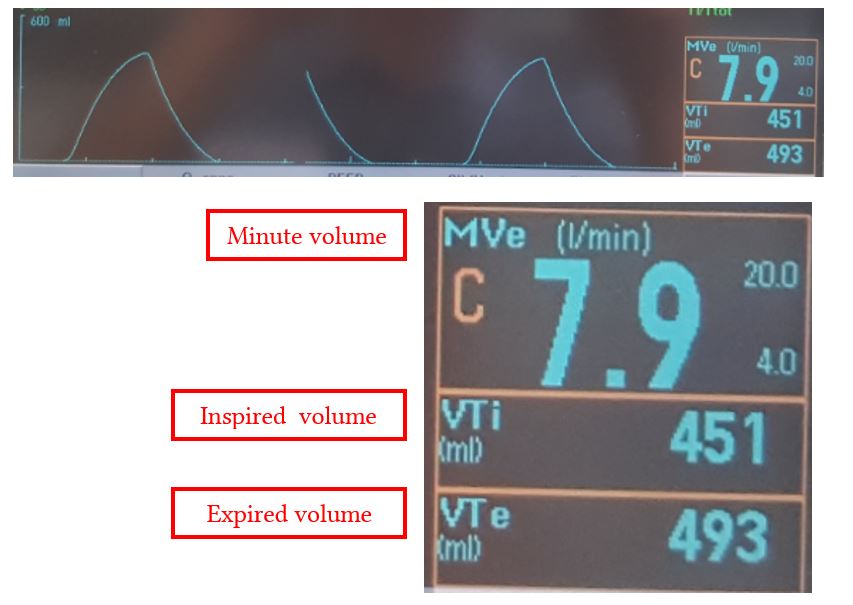 Because they measure both inspiratory and expiratory flow, most modern ventilators tend to report both inspired and expired volume. These values are usually slightly different, because of measurement error and circuit leak.

The relationship of flow, pressure and resistance

Pressure is what is generated when flow is directed into a closed system like your lung.

“Resistance" in this setting is due to the resistance of the endotracheal tube and the patients own airways, as well as the resistance of the chest wall and the lung itself against being distended (the reverse of compliance). As mentioned above (and discussed elsewhere) resistance can be a complicated topic. At the most basic level, it can be described as the change in pressure resulting from a rate of flow:

This is the total sum of resistance in the "patient circuit" - from the tubes connecting the patient to the ventilator, to the bronchi, the chest wall, the lung parenchyma, the distended abdomen, the bronchopleural fistula... This is the net product of all these factors.  By looking at a pressure waveform which forms with the delivery of a known volume one can begin to separate these multiple factors (at least into a "static" and a "dynamic" group, meaning those which depend on flow and those which do not).

This prompts the next important point. Resistance is only a meaningful concept while there is flow. No flow means there is nothing to resist, and therefore whatever pressure one measures in the absence of flow is generated purely by the elastic components of the circuit – mainly, the patient’s lungs. Thus, during an expiratory or inspiratory hold manoeuvre one is able to determine the “true” alveolar pressure. More on this later.

Measurement of compliance by the mechanical ventilator

Respiratory compliance is the change in volume produced by a given pressure.

Compliance in this setting is the total lung compliance (i.e. change in volume divided by change in pleural pressure). Most modern mechanical ventilators calculate this variable automatically. It is usually represented as “Cdyn”, acknowledging that there is a real difference between static and dynamic compliance. In order to get a static value, one would need to do an inspiratory hold manoeuvre, and get a plateau pressure reading. 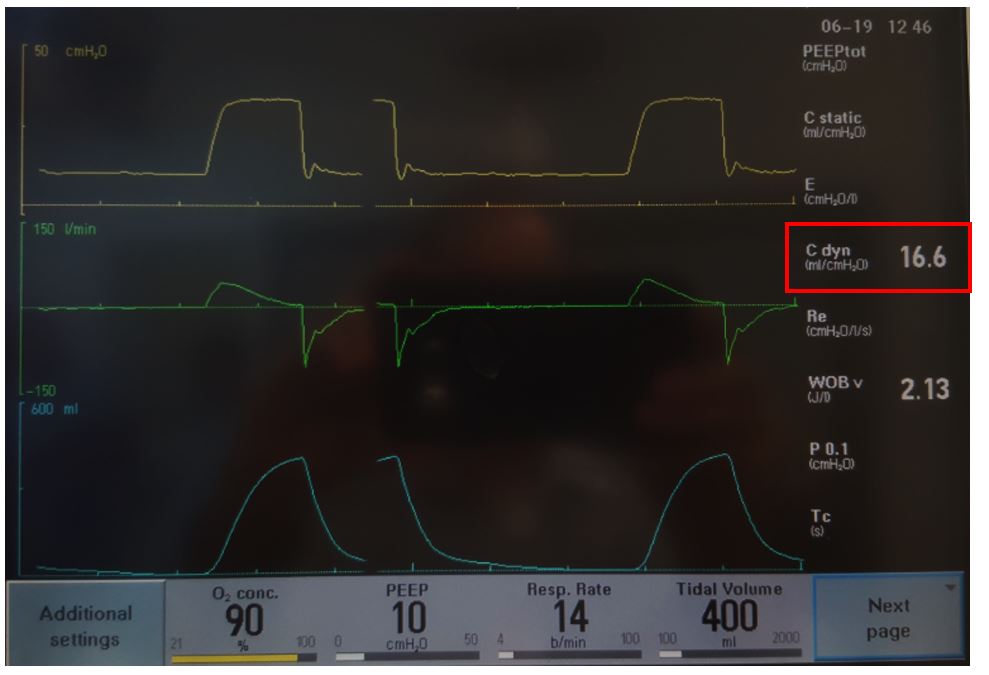 In fact, modern ventilators can derive numerous interesting variables from the measurements of flow and pressure. One can view these devices as highly sophisticated spirometers. The screenshot of the Maquet SERVO-i shows off some of the possibilities (it even tries to calculate work of breathing for you, in joules per litre).