Limit variables are now preferentially called “target” variables because the ISO had felt that “limit” was a term more properly applied to the safety alarm settings on a ventilator. However, they felt this fairly late in the history of mechanical ventilation (Chatburn et al, 2010) and so of the published literature, most still confusingly refers to limits, as probably do all critical care practitioners who trained before 2010 and who do not routinely browse ISO standards documents. In order to be consistent with the inconsistent terminology in the literature, this resource also uses the  terms “target” and “limit” inconsistently.

Time of course cannot be a limit variable, because that would defy the abovestated definition - with a “time-limited” breath, the breath would have to end (and that would be “cycling”).

The limit variable of a mode of ventilation can occasionally be discerned from the "squaring" of the ventilator waveform for that variable. This plateau occurs when the limit is attained. It does not have to be square however, as there is no rule that says the limit has to stay the same for the whole of inspiration. If it suits you, the limit can change mid-breath, and some adaptive modes of ventilation make on-the-fly adjustments to the inspiratory limits. 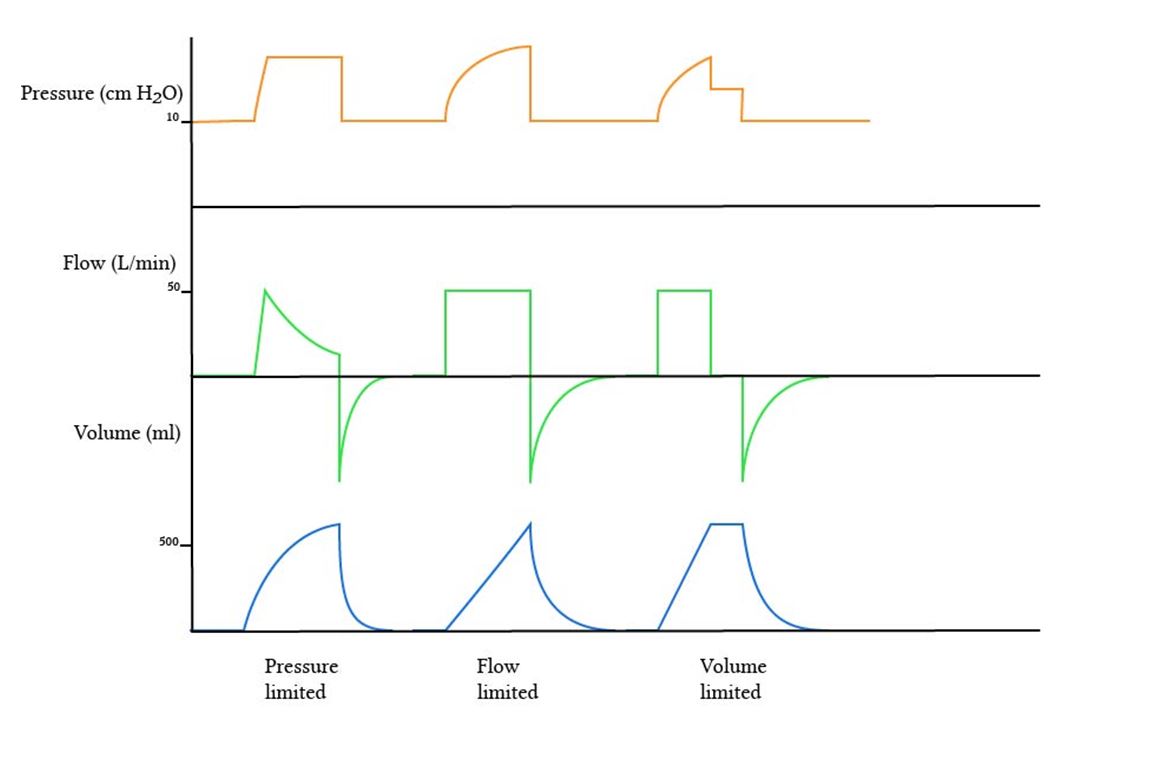 Another example of a pressure-limited mode of ventilation is Pressure Support (PSV) on the Maquet SERVO-i ventilator. This mode is flow-cycled instead of time-cycled; the cycling variable is explained in the next section.

If the circuit gas flow reaches a prescribed maximum value before the end of inspiration, the ventilator is said to be flow limited. The Puritan Bennett model ventilators allow the user to change the flow limits, whereas the SERVO-i does not.

The flow limit has implications for patient comfort. For instance, if the flow limit is set to 40L/min, then the ventilator will not produce a higher flow rate even if the patient makes a strong respiratory effort. This could result in decreased patient comfort and patient-ventilator dyssynchrony.

The theoretical maximum flow provided by a mechanical ventilator is determined by the gas delivery valve and wall gas faucet pressure; for instance, the Maquet Servo-I has a theoretical maximum flow limit of approximately 200L/min (3.3L/sec). For reference, the typical peak inspiratory flow rate of a calmly breathing person is 30L/min, and it can increase to over 200L/min in an athletic individual performing heavy exercise (Anderson et al, 2006).

In volume control ventilation, a specified volume is set. The ventilator will deliver that set volume. It is desirable to deliver no greater volume than that specified, in order to prevent overdistension and lung trauma as well as for other reasons (eg. to maintain a tight control over minute ventilation and PaCO2). When the volume limit is met, the inspiratory flow ceases (the ventilator closes the inspiratory valve), but the expiratory phase does not begin. If the mode is time-cycled, the patient will "hold their breath" until the prescribed time elapses, i.e. there is in effect a short inspiratory pause.

Obviously, the limit variables play a significant role in determining the physiological effects of mechanical ventilation, mainly by virtue of their control over the shape of the waveforms. Ergo, whatever influence a limit variable has over the pressure waveform will alter the mean airway pressure and therefore oxygenation. Whenever the flow waveform is affected by a flow limit, the contribution from respiratory resistance will be altered. When volume limits are set, they will affect the total minute volume and therefore CO2 clearance.