Cycling from inspiration to expiration

Just as the ventilator needs to know when to start a breath, so it needs to know when to end it, and this is defined by the cycling variable. This setting determines which parameter is used to open the expiratory valve. Strictly speaking, multiple cycling variables may be active at any given time, but usually some of them (for example, pressure) take the form of alarm limits. The cycling variable is an important determinant of how comfortable your patient is going to be with their mechanical breaths, as it represents another point at which they can exercise control over their tidal volume.

In terms of peer-reviewed reading materials for this topic, probably the best reference is the 2011 article by Michael Gentile. That single reference would probably be enough to prepare the CICM primary or fellowship exam candidate for whatever the college throws at them. The next step up in sophistication would be to explore Dean Hess’ article from 2005, which explores the bottomless depths of troubleshooting a spontaneous mode of ventilation (for which flow cycling is a representative phase variable)

A breath is considered time cycled if the inspiratory phase ends when a predetermined time has elapsed. This is usually a feature of "mandatory" modes of ventilation. For instance, when one has set a respiratory rate of 20 and an I:E ratio of 1:2, it is understood that the inspiratory phase will last 1 second in a total 3-second breath cycle. Ergo, after 1 second the ventilator will terminate inspiratory flow and cycle to expiration. 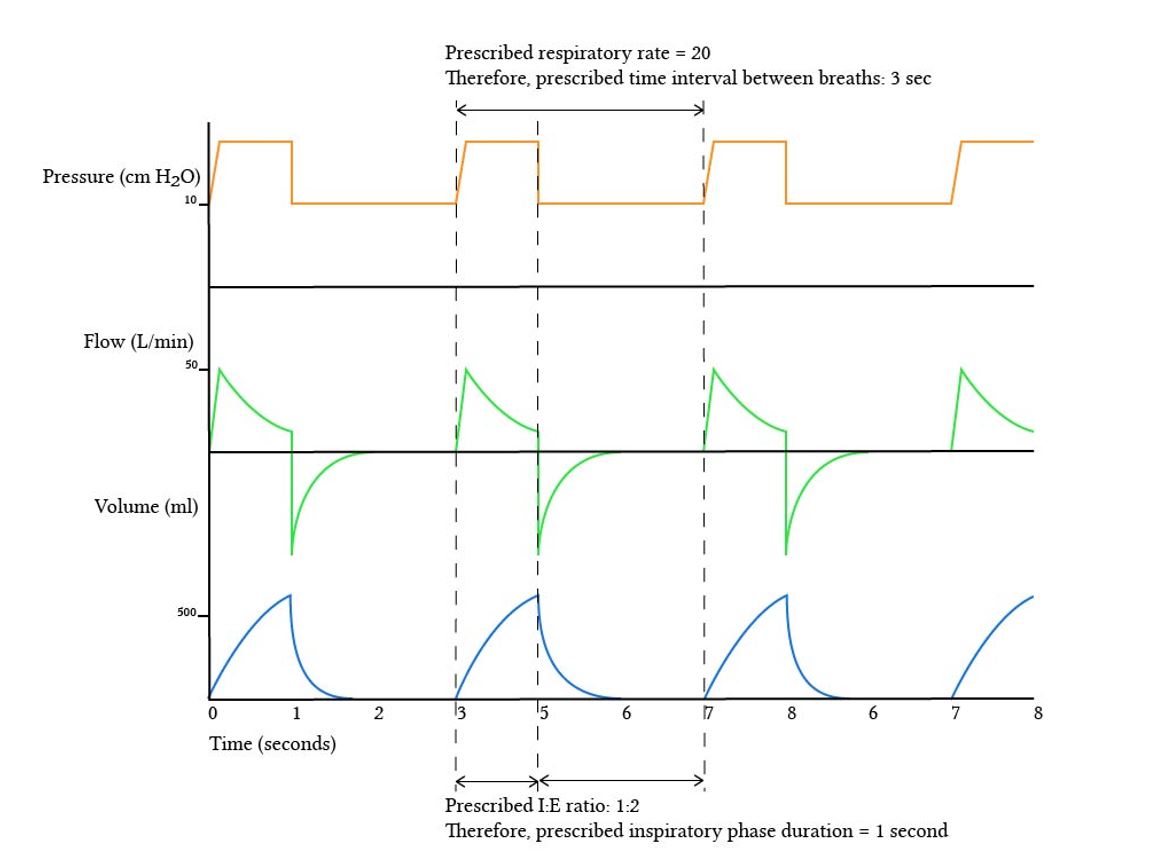 The advantages of this method of breath cycling are:

It also has disadvantages, which – if one were to list them, for example because somebody asked this in a written exam paper – would be basically the same as the disadvantages of a mandatory mode of ventilation. 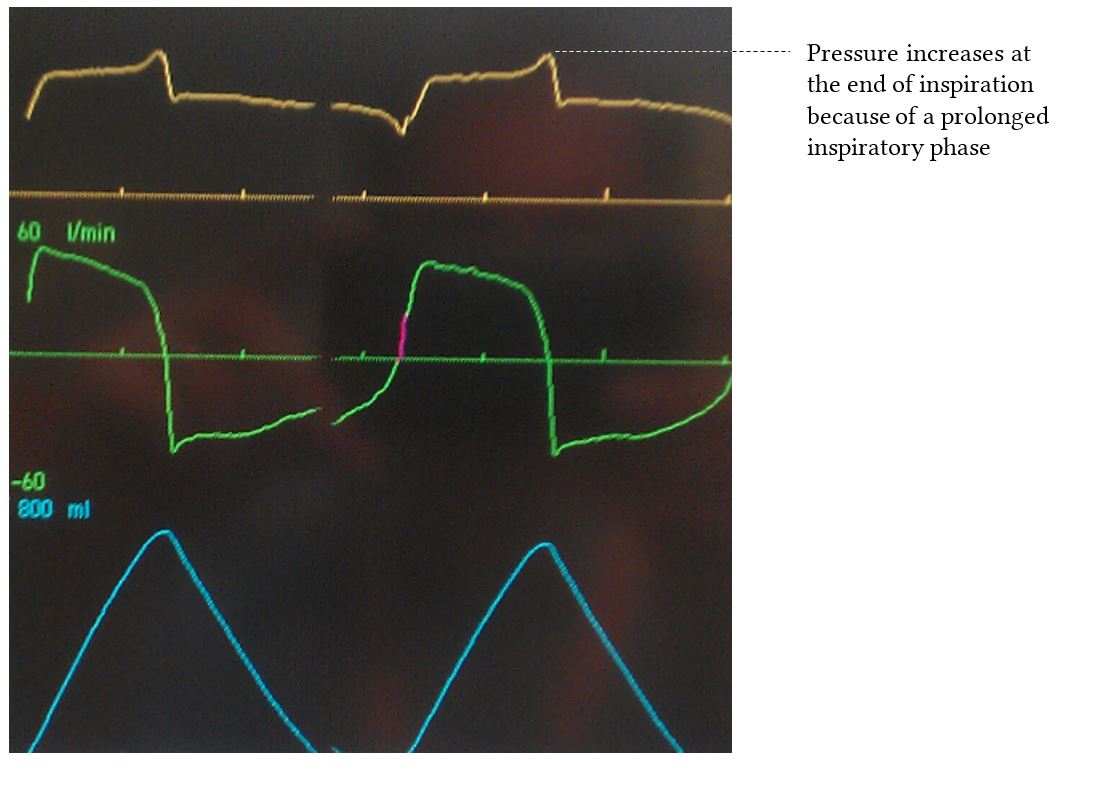 With flow-cycled ventilation, the ventilator cycles into the expiratory phase once the flow has decreased to a predetermined value during inspiration. 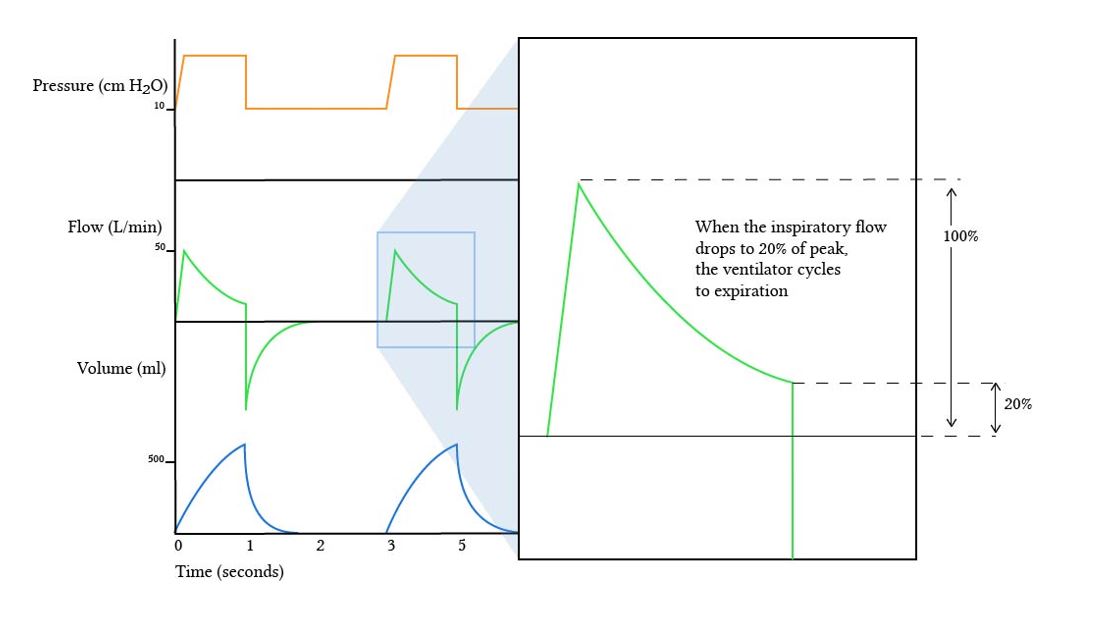 The flow cycling variable can be a fixed flow value in L/min or a percentage fraction of the peak flow rate achieved during inspiration.  In some models it is probably something that can be pre-set at an absolute value, eg 5L/min. The Maquet SERVO-i expresses the flow cycling variable as a percentage of peak inspiratory flow and allows a range of settings (between 1% and 70%.), whereas the Puritan Bennett 840 only goes up to 45%. 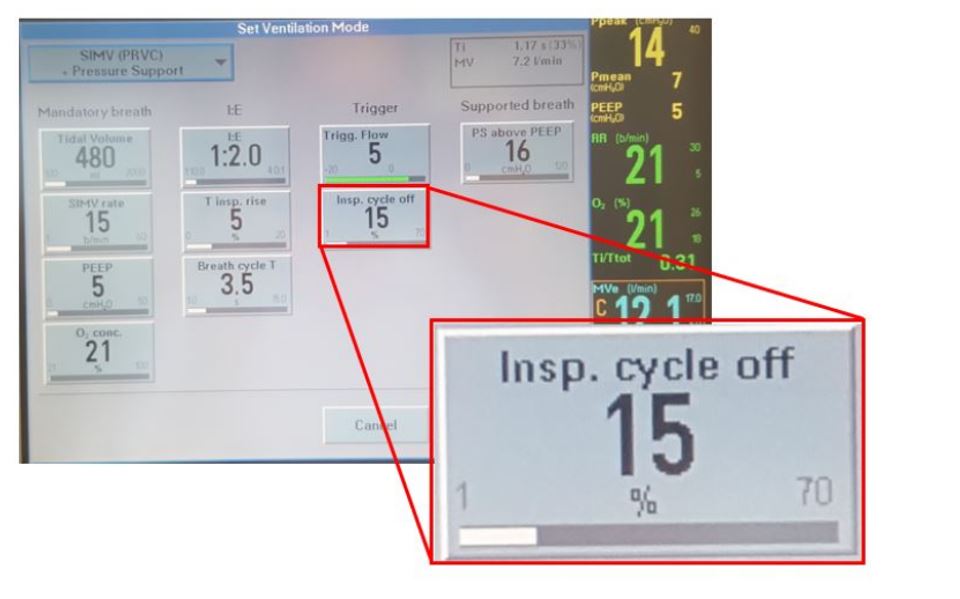 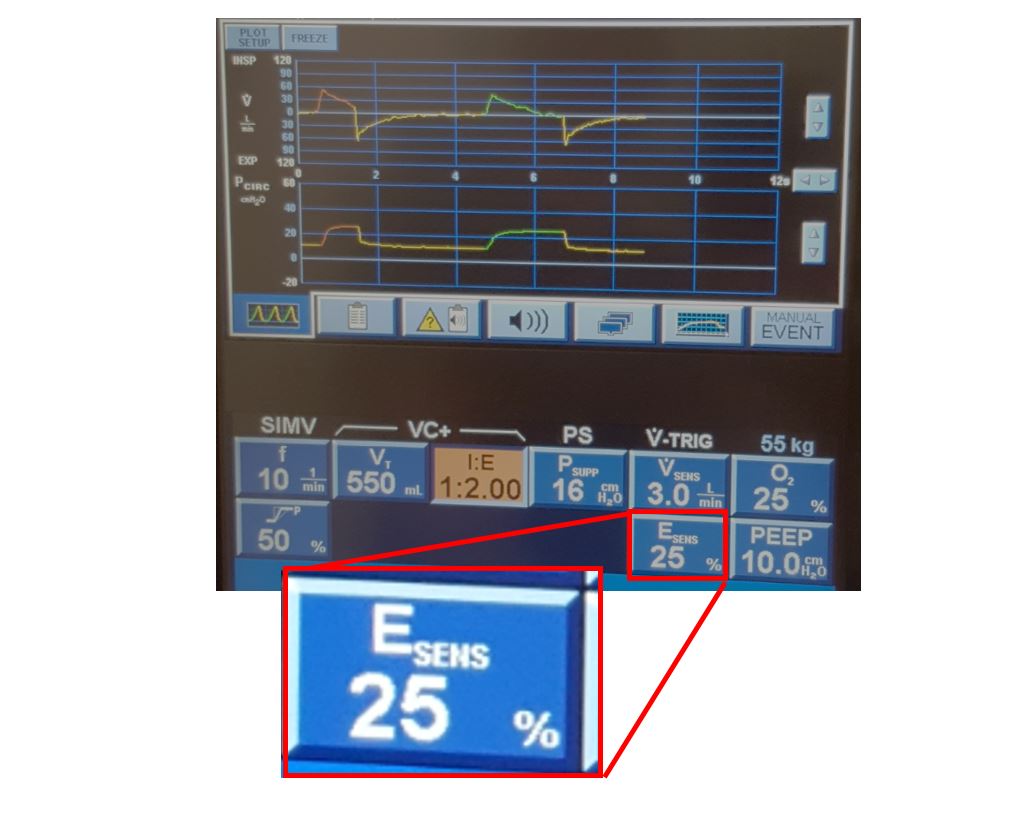 A flow cycle setting of 1% would result in a breath which cycles to expiration only after the flow has essentially stopped, i.e. at a point of significant lung distension. Conversely, a flow cycle setting of 70% would terminate a breath very early in the inspiratory phase, and achieve an insufficiently low tidal volume. The default setting on the SERVO-i ventilator is 15% which corresponds to an inspiratory flow rate of 4.5L/min for a calmly breathing adult.

This has interesting implications, depending on what sort of calmly breathing adult you are ventilating. Let’s take some standard setting. The patients with restrictive lung disease will have poor respiratory compliance and their flow rate will drop rather quickly; as the result their tidal volumes will be lower. In contrast, the patient with emphysematous lung disease may have a very high lung compliance and will get larger tidal volumes with the same settings on the ventilator. Exposure to pressure will be different as well: the higher inspiratory pressure will be more sustained and the waveform will be more “square” with a lower flow cycling setting. The graphics below were stolen shamelessly from the Gentile paper (2011). 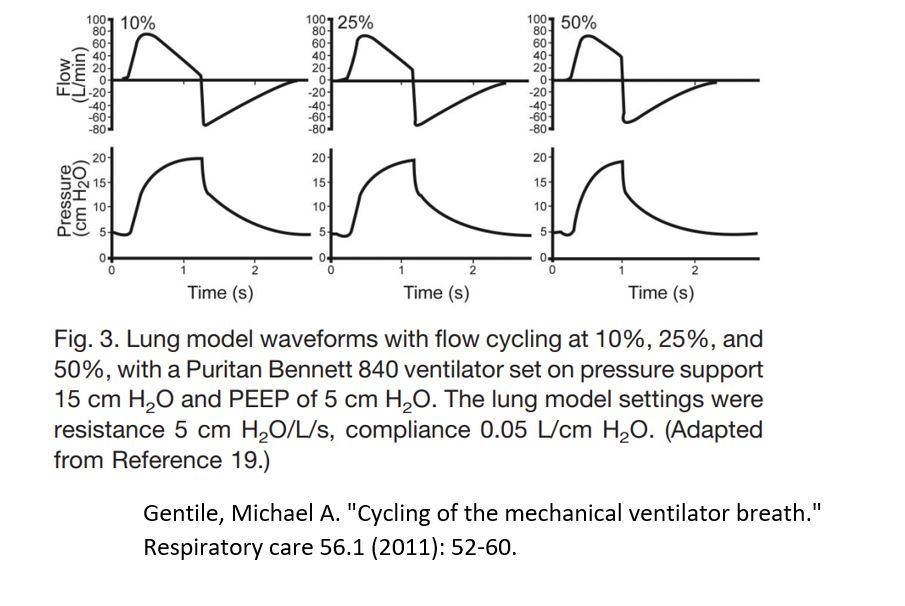 This is not an advantage or a disadvantage of flow cycling; merely on observation. This phase variable is an instrument, and like any instrument it has the potential for being used in some profoundly stupid fashion. For instance, in the mindless pursuit of somebody’s idea of perfect tidal volumes one might be tempted to drop this setting to zero for patients with poorly compliant lungs, thereby producing good volumes together with overdistension discomfort and increased work of breathing.

Flow-cycled ventilation has many advantages:

There are also some disadvantages:

During pressure-cycled ventilation, inspiration ends when a certain user-prescribed pressure value is achieved. This is old-school – to the extent that no modern ventilator pressure-cycles, and most articles about this are from the 1960s. Pressure cycling is a feature of historical ventilator models (eg. the Bird Mark 8) and has become largely obsolete in the modern era of microprocessor-controlled solenoid valves.

In honour of this rich history, instead of the conventional vector diagram, here is a drawing of a pressure-cycled ventilator waveform generated by the Bird Mark 8, from a 1965 paper by H. Herzog 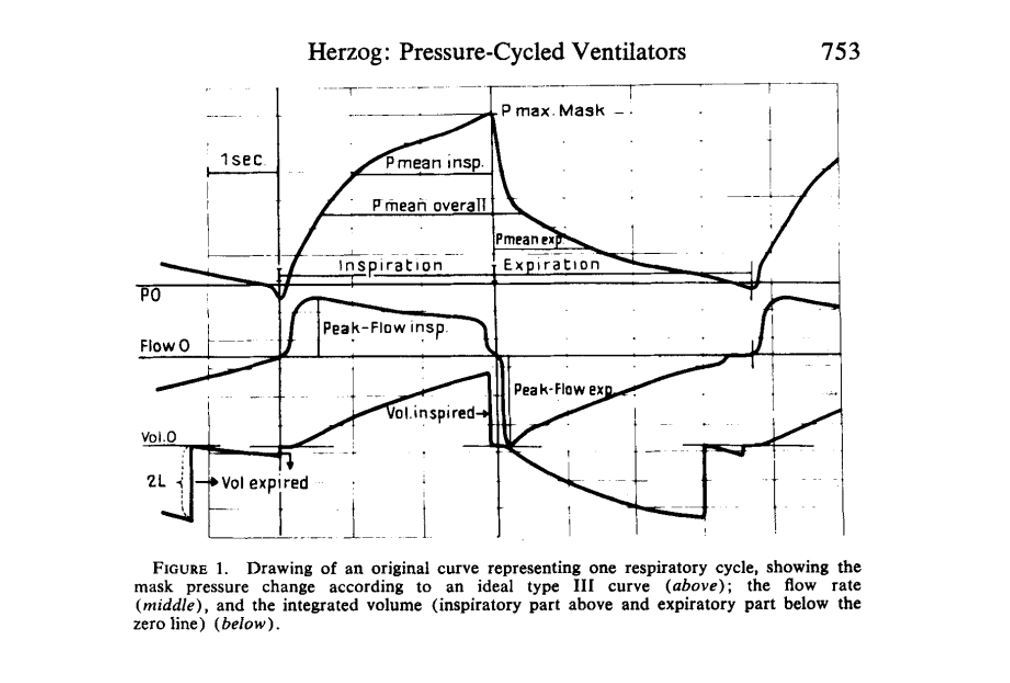 Advantages of this method are few; they include:

Which is a nice segue to the disadvantages:

The inspiratory phase of a volume-cycled breath ends when the specified volume has been delivered. The volume will therefore remain constant, even though the characteristics of the patient's respiratory system may change. As a result, the pressure in the system and the flow will vary depending on lung compliance and airway resistance. As with pressure cycling, this method of terminating a breath is largely historical. Older models of piston ventilators were volume cycled, i.e. the ventilator would cycle to expiration when the piston delivered a pre-determined volume. Most modern ventilators do not make use of this method.

Its major disadvantages are related to safety. The risk of pneumothorax was probably the biggest thing. This cycling mode has the propensity to generate high peak airway pressures when the lung compliance deteriorates. The problem was at its worst in the bad old days. Steier et al (1974) reported on a scenario where the ICU started using volume-cycled ventilators and developed a shocking 43% increase in the rate of pneumothorax, where specifically the patients ventilated with on volume-cycled modes were 28 times more likely to develop complications.