This chapter does not have any corresponding requirements to satisfy in the 2017 CICM Primary Syllabus or in the CICM WCA document (“Ventilation”), because presumably the matters of appropriate tidal volume and respiratory rate are so fundamental that they will be intuitively grasped by even the most junior members of the critical care workforce. That may well be the case, but the authors’ attachment to completeness has produced this product anyway, mainly in case he or anybody ever needs to answer the question, “what tidal volume do I set for this patient, and why”.

Tidal volume is 7 ml/kg in a normally breathing subject, according to Kerry Brandis' "The Physiology Viva". If anaesthetic trainees are expected to regurgitate it, it must be true. As usual, it is impossible to track down where Brandis got this from, but only the briefest begooglement reveals that the origins of this information are ancient. For example, we have studies such as Needham et al (1954) whose tables reveal a range of resting tidal volumes in the range of 570-780ml for adult males and 500-550 for adult females, which gave about 7ml/kg taking into account the weight of these volunteers. Going back further, Hutchinson (1846) described tidal volume measurement (he called this pulmonary volume “breathing air” ), measuring his subjects’ capacities in cubic inches and their weight in pounds. If his measurements are converted into ml/kg, one finds that they agree with Needham et al. This makes the 7ml/kg tidal volume a fundamental tenet; it may as well be carved on a granite plinth dating back to the Silurian.

Speaking of monolithic messages passed down from ancient civilisations, another such ancient artefact is the Radford nomogram. It is trotted out whenever tidal volume selection is discussed, viewed as relevant even in the modern day (it appears in the 2016 edition of Egan’s Fundamentals of Respiratory care, for example). The original nomogram comes from Edward J. Radford’s “special communication” to the editor of the Journal of Applied Physiology, published in 1955. The nomogram itself looks like this: 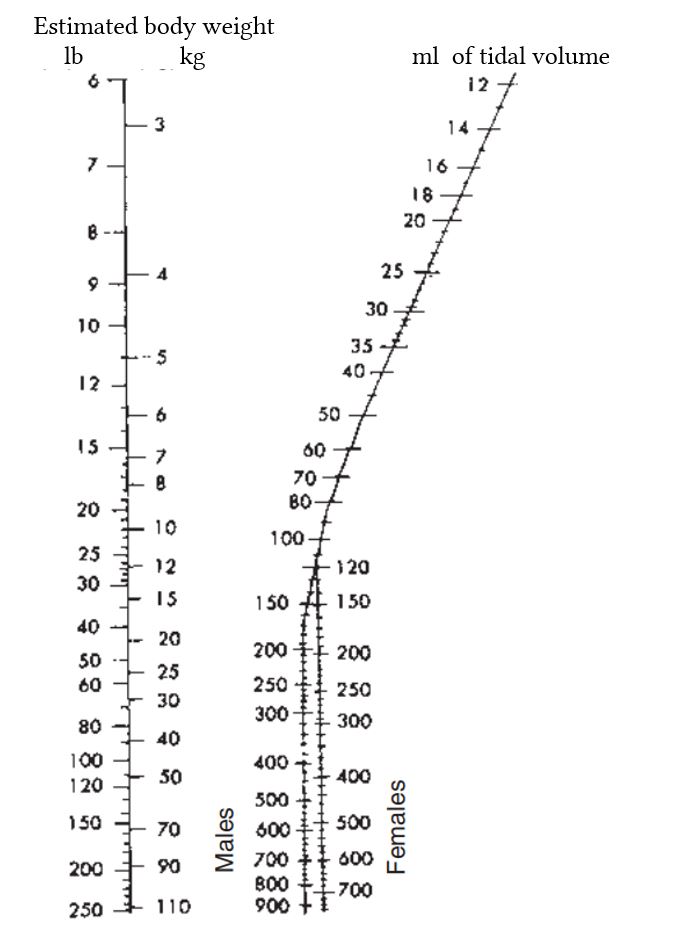 The use of this nomogram to estimate appropriate tidal volumes is still recommended by such grimoires of the business as Egan’s. The values are adjusted for various conditions, for example, one adds 10% for not being in a coma, 5% for every Fahrenheit degree of rectal temperature above 99, as well as equipment dead space and et cetera. When the patient is intubated, the recommendation is to “subtract volume equal to one-half body weight in pounds”, which is to say 1ml of tidal volume per every two pounds of predicted body weight, or roughly 1 ml per kg.  Going by this nomogram, the 70kg healthy intoxicated male would merit (600 – 70) = 530ml of tidal volume, or 7.5 ml/kg of tidal volume.

This tidal volume recommendation passes the sanity test, i.e. they do not sound insane. In general, if one takes a view of mechanical ventilation an invasive and necessarily injurious thing, then one might be attracted to the idea of using lower tidal volumes for all patients – not just ARDS patients.  Both the Radford nomogram as well as modern sources (UpToDate ) recommend tidal volumes of 6-8ml/kg – these are little more than expert recommendations, but at least they agree. Another good modern reference is Bowton et al (2016), “Ventilatory management of the noninjured lung”.The authors recommend “lung protective ventilation” for everybody.

Historic use of high tidal volume ventilation in non-ARDS patients

In 1963, Bendixen et al explored the respiratory parameters of 18 patients undergoing laparotomy and determined that there was a role for “periodic deep breaths” in preventing atelectasis and shunt during anaesthesia. The authors did not mention tidal volumes, they just recruited their patients with a pressure of 30-40 cm H2O intermittently; though from their compliance graphs it is possible to determine that they got volumes around 1350ml, or almost 20ml/kg.  This was somehow extrapolated into a tidal volume target of 12-15ml/kg for anaesthetised patients. The idea that the healthy patient should be ventilated with a volume like this has persisted to this day, and even textbooks from the early 2000s recommend 12-15ml/kg for routine anaesthetic cases.

Unlike the recommendation by UpToDate authors and Radford, this 12-15ml/kg idea does not pass the sanity test.  To be clear, nobody these days is going to ventilate their patients with volumes like that (1050ml tidal volumes for a 70kg person?). This practice seems to have disappeared from the textbooks.

In the 1980s ICU, a patient on mandatory mode of ventilation traditionally got around 12-15ml/kg. That works out to be roughly 840-1050ml for a 70kg person. It turns out that this was harmful. It was way too much.

The famous ARDS network ARMA study turned this on its head found that in people with acute lung injury ventilation with lower tidal volumes (something like 4-5ml/kg of true weight, or 6ml/kg of predicted body weight) improves survival when compared to 12ml/kg.

What sucks is that the study just had these two volume settings. Nothing in between was tested (i.e. there was no comparison with 7ml/kg, 8ml/kg, 9 ml/kg). This is suboptimal because most of the people you are going to ventilate will be having volumes in this range.

The consensus of learned elders seems to be that you should use your own judgement, and tolerate smaller and smaller volumes (and thus higher and higher CO2) as the ARDS becomes more severe. Thus, the tidal volumes you ought to aim for in ARDS are in the territory of 350-420ml for a 70kg person.

Selection of the respiratory rate comes down to the desired minute volume, and the desired minute volume is a function of the measured O2clearance. This of course relies on you adjusting the minute ventilation according to some serial arterial blood gas measurements. Until you have those serial measurements, of course you still need to decide on some initial settings. So how does one choose a respiratory rate knowing nothing about the patient?

The normal resting minute volume in humans is something like 70-100ml/kg/min,  and so in order to produce this minute volume with tidal volumes of 6-8ml/kg, one would require a respiratory rate of between 12-16 breaths per minute. So, one can start with that for all patients who have nothing wrong with their lungs, because that rate is unlikely to kill anybody with hypercapnia. For patients with severely noncompliant lungs whose tidal volumes must for ARDSNET reasons be low, one would increase that rate to something higher (18, 20, 22? For some reason, most people seem to choose even numbers for respiratory rates and PEEP values, and odd numbers for the days of antibiotic duration). For the severely bronchospastic patient, the respiratory rate should be lower. An increased expiratory time is required to clear CO2 and prevent gas trapping.

Hutchinson, John. "On the capacity of the lungs, and on the respiratory functions, with a view of establishing a precise and easy method of detecting disease by the spirometer." Medico-chirurgical transactions 29 (1846): 137.