This chapter vaguely addresses the requirements of the CICM WCA document (“Ventilation”), where a successful trainee “outlines the differences between volume and pressure controlled ventilation”.  The definition of control variables and the very flimsy definition of “control” are discussed in a chapter which is dedicated to such pfuffery, left out of this chapter and put aside so that serious discussion can take place here. There are some substantial differences between the conventional pressure control and volume control modes, which are mainly related to the shape of the pressure and flow waveforms which they deliver. 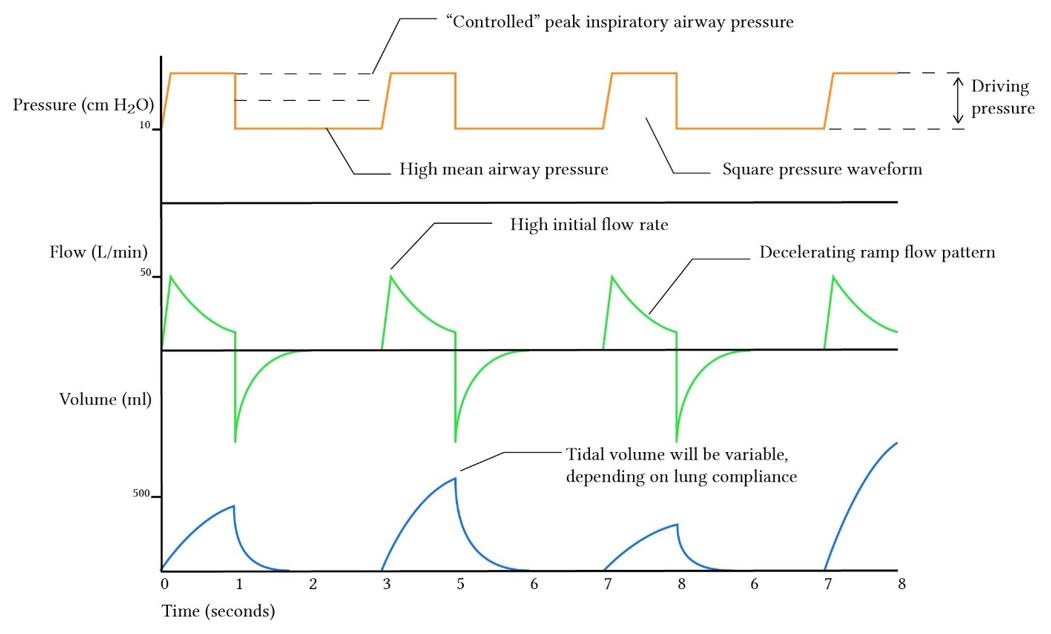 During the early inspiratory phase, the ventilator provides a high inspiratory flow rate to rapidly achieve the pressure limit variable ("PC above PEEP" on a SERVO-i). In order to maintain this pressure, the flow rate needs to decrease over the course of inspiration, and it generally takes the shape of a downsloping ramp.  If the inspiratory time is long enough, the flow will eventually reach zero, as demonstrated in the ventilator graphic below. When the flow rate reaches zero, i.e. in the absence of flow, the constant prescribed pressure is in equilibrium with the peak alveolar pressure at the end of the breath and equals the plateau pressure. 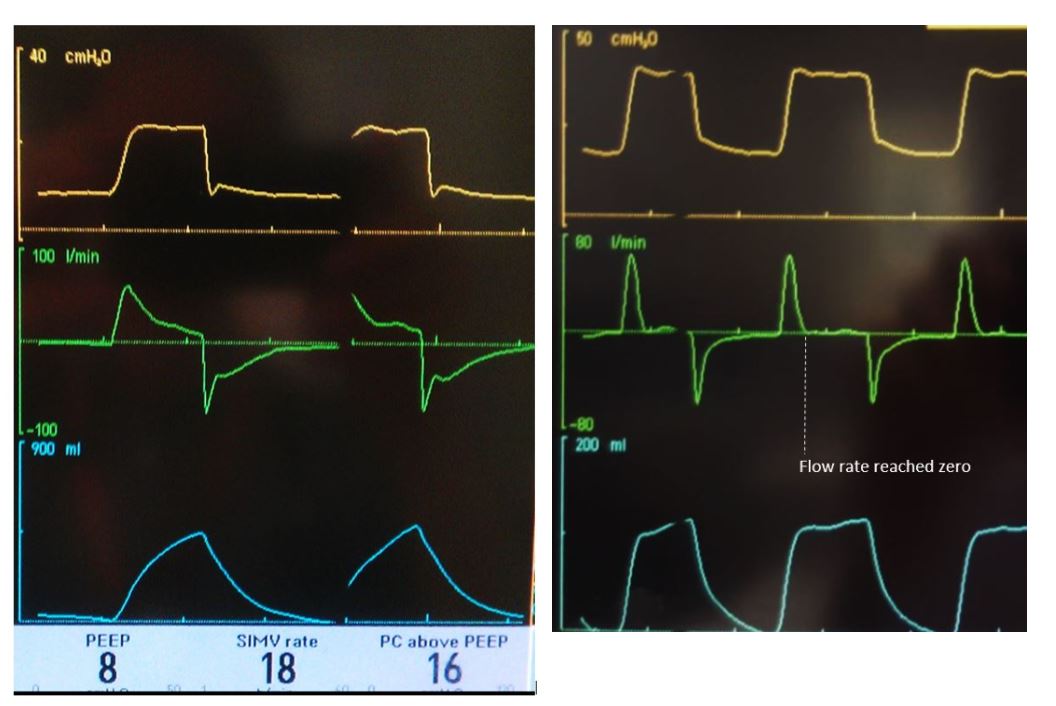 PCV has a series of theoretical advantages in ventilating a patient in whom hypoxia and poor lung compliance are major contributors to respiratory failure:

Additionally, the pressure control variable allows for a significant leak. The ventilator will automatically adjust the inspiratory flow rate to accommodate for even a significant leak in an effort to maintain the prescribed pressure level. This has advantages in settings where circuit leak is inevitable, for example during bronchoscopy or while ventilating a patient with a bronchopleural fistula.

By definition, in volume control modes the tidal volume is the defined variable which is used by the ventilator to give feedback to the solenoid valve circuits. As volume and flow are inextricably linked, the volume control modes are generally constant flow modes, i.e. the ventilator delivers flow which is constant, and stops this flow when the desired volume is achieved. Because pressure is not controlled or regulated in any way, the pressure waveform takes a parabolic sloping shape as the lungs distend during a breath. 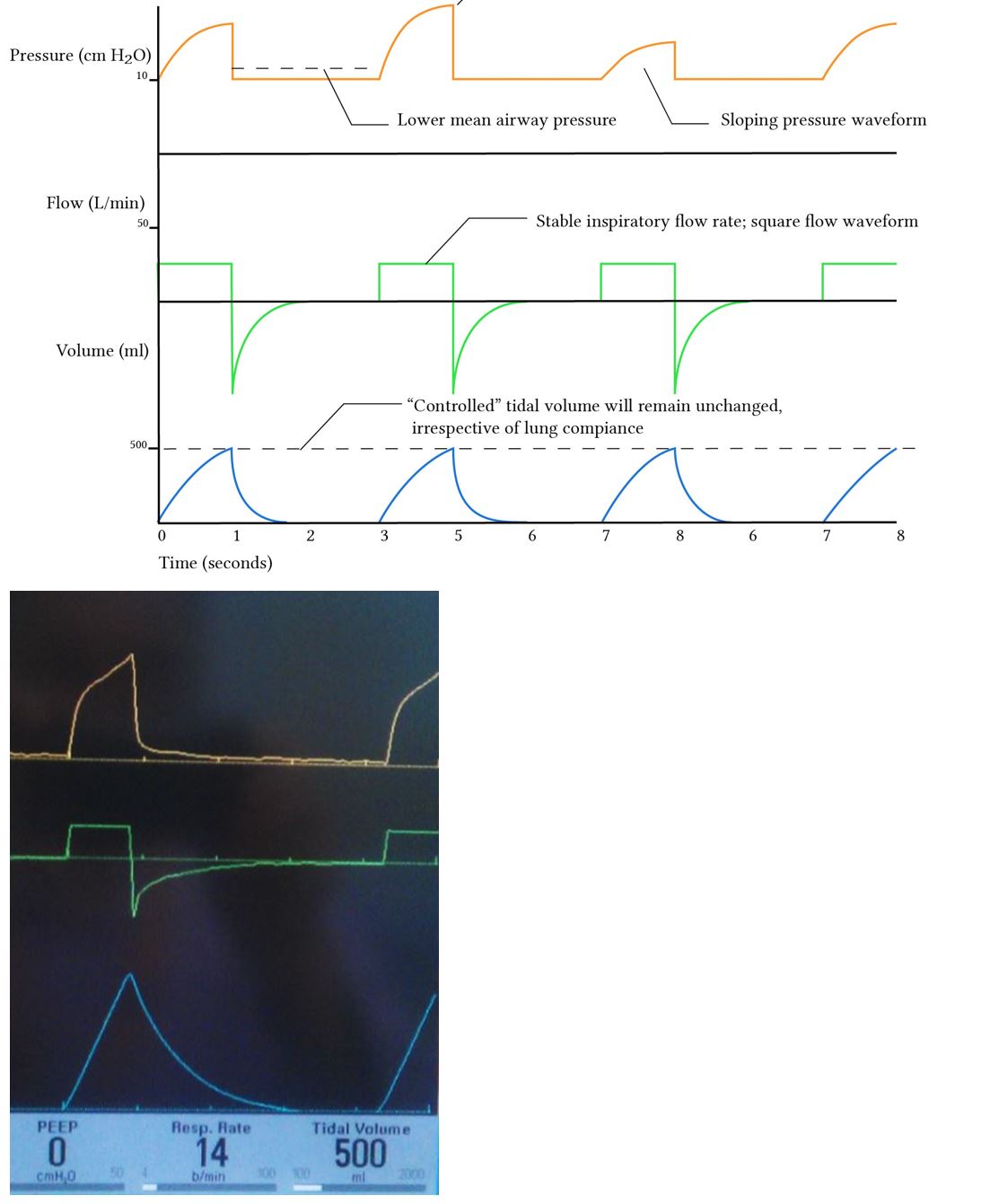 Scenarios where the choice of control variable mattters

The evidence which supports the specific choice of a pressure control mode or volume control mode is surprisingly scant, prompting authors such as Campbell and Davis (2002) to publish articles titled something like  “Pressure-controlled versus volume-controlled ventilation: does it matter?” (spoiler: it doesn’t). This should not be viewed negatively as uncertainty or disagreement among experts. A better way to put it would be to borrow a turn of phrase from the narrative review by Rittayamai et al (2015), who  reviewed the conflicting literature and concluded triumphantly that “these data should help to open the choice of ventilation of patients with acute respiratory failure”. In short, because there is no obvious winner, anything goes – you’ll not be criticised for using either mode. With that said, it is possible to discuss the few scenarios where PCV and VCV were compared directly. The literature understandably focuses on ARDS, and inexplicably on bariatric surgery and one-lung ventilation.

In ARDS, though the teaching is to use a pressure-controlled mode, the evidence for this is weak. For example, Lessard et al (1994) compared volume and pressure controlled modes with a variety of I:E ratios, and came to the conclusion that there was no short-term beneficial effect of PCV. In fact with inverse ratio ventilation PCV (I:E 2:1) there was a deterioration of oxygenation, in spite of higher mean airway pressure. One cannot help but think that they may have needed to fill that patient with more volume. Esteban et al (2000) randomised about 40 patients to VCV or PCV and found a preposterous-sounding mortality difference (78% vs 51%) in favour of pressure control, which is difficult to take seriously because the group mortality is well in excess of the norm, suggesting something biased the result (the authors themselves conclude that “the development of organ failures was probably not related to the ventilatory mode”). There are a ton of such small contradictory trials. Looking at things through the Cochrane telescope, Chacko et al (2015) rounded up over 1000 patients from three good-sized RCTs and concluded soberly that the available data are “insufficient to confirm or refute” the standing hypothesis.

In one-lung anaesthesia, there may be some benefit to pressure control, over volume control. Tugrul et al (1997) found that oxygenation improved and peak airway pressures decreased during one-lung ventilation.  Unzueta et al (2007) agreed that peak pressures were lower, but did not replicate the improved oxygenation.

In laparoscopic obesity surgery, pressure control seems to have an advantage (Cadi et al, 2008). Surprisingly, when the mean airway pressure was calculated for these patients, there was not significant difference between groups. The authors suggested that the high early flow rate in PCV somehow contributes to some sort of “instantaneous regional pressures” in the lungs, implying that the overdistension of short time-constant alveoli is responsible for the improved gas exchange

Acknowledging the major disadvantages of the abovementioned modes of ventilation, adaptive modes such as PRVC are a fusion of the two strategies which combines the advantages of each without magnifying their disadvantages.  For a PRVC mode, the user sets a target tidal volume, as in a volume control mode. The Maquet SERVO-i then performs an assessment of the dynamic lung compliance over the course of three initial calibrating breaths, which are volume control breaths. Using this lung compliance data, it then determines the appropriate pressure level required to achieve the prescribed tidal volume. 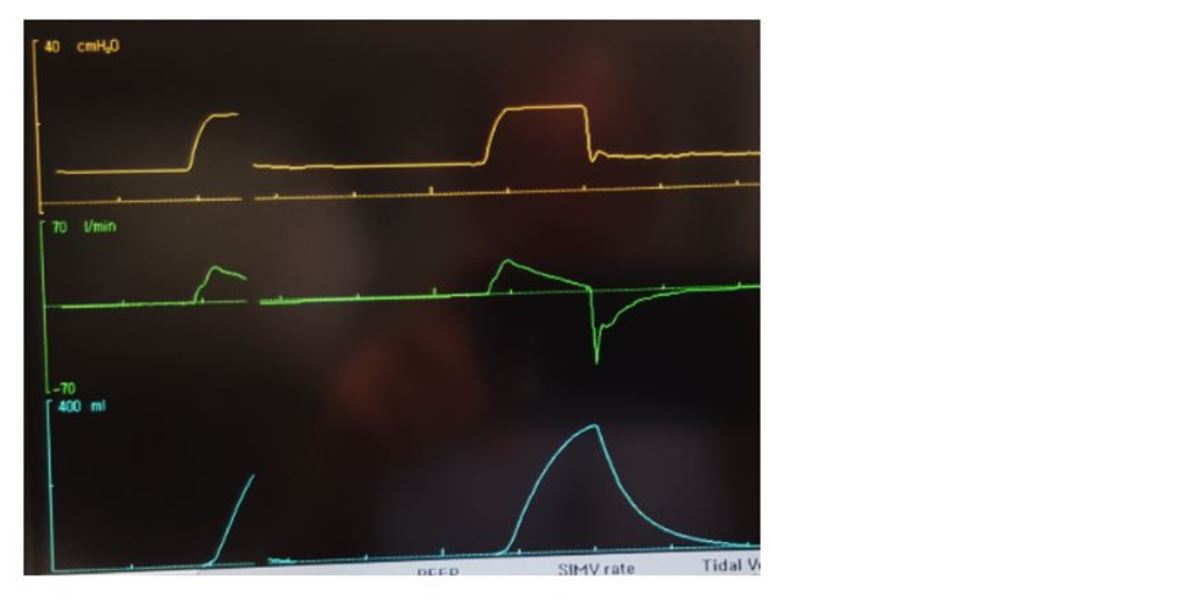 This mode does have some disadvantages: a variable patient effort may lead to a highly variable tidal volume, because the pressure level is dependent on the respiratory characteristics over the previous breaths. However, it preserves several advantages of PCV and VCV, and none of their disadvantages:

The decelerating flow waveform seems to be the main determinant here. By using this pattern of flow, volume controlled modes lose many of their disadvantages. For example, Davis et al (1996) found that whenever they used a decelerating ramp flow waveform, their patients were well-oxygenated irrespective of whether they used volume or pressure as the control variable.

Chatburn, Robert L., Teresa A. Volsko, and Mohamad El-Khatib. "The effect of airway leak on tidal volume during pressure-or flow-controlled ventilation of the neonate: A model study." Respiratory care 41.8 (1996): 728-735.