Interpreting the shape of the pressure-volume loop

This chapter is most relevant to Sections F3(iv) and F3(v)  from the 2017 CICM Primary Syllabus, which expect the exam candidates to "describe the pressure and volume relationships in the respiratory system" and "describe the pressure flow and flow volume relationships of the lung". Those might sound like fairly straightforward learning objectives, but if one thinks about it for a second, one is overcome with crippling anxiety at the thought of having to answer a question worded in this fashion. Do they mean loops? Spirometry? Compliance curves?

Given that we have been fortunate to never see any such SAQs, it is difficult to decipher the exact intentions of the CICM syllabus designers, and in any case there does not appear to be any exam-centric imperative to reconstruct those thought processes. One does, however, note that pressure-volume and flow-volume loops are not specifically noted anywhere else in the syllabus, and they certainly are a famously examinable item. It is not inconceivable that the demand to draw such curves might be lurking in the next paper. Also, though there has never been any CICM Part I question about pressure-volume loops, the college brought them up in the Fellowship exam, in multiple SAQs. Because they still seem like Part I material, they are dissected carefully here, and a brief summary is offered to the Part II candidate in the appropriate Required Reading section. The exam candidate following a strict past-paper-driven strategy (otherwise known as "the only successful strategy") would be well advised to omit this chapter from their list of revision resources. It is quite possible to complete the CICM training program without ever having looked at this material, and it is possible to go through one's entire professional life as an intensivist without thinking about it in any great detail.

For references, one might go to Harris (2005) as the definitive resource, as this free article probably has the best balance of detail. Further discussion of the factors which affect these relationships are offered in the chapter on static and dynamic compliance. For pragmatic advice regarding pressure-volume loop interpretation, one could turn to Rittner & Döring (year unknown), but their book is actually Dräger propaganda, and therefore should not be listed alongside peer-reviewed literature.

Historically, even though looplike compliance curves have been known for most of the 20th century, people weren't really interested in these loops in any clinical sense until ARDS was characterised and described. After this point, interest in measuring pressure-volume loops increased, largely because they were viewed as potentially useful in determining the optimum level of PEEP. Some of the first discussion of this was in Falke et al (1971), who used these loops  to describe the relationship of PEEP and compliance. If PEEP is applied, the entire loop shifts right, as the baseline pressure becomes the PEEP. This loop can be observed in patients on CPAP.

The shape of the curves in the images here, though they appear plausible, are in fact entirely confabulated. Their shape was suggested by the alveolar pressure curves published by Lu et al (2001). Though most textbooks tend to represent these loops as rectangles with rounded corners (i.e. the volume changes steadily under a stable pressure through much of the respiratory cycle), from these graphics one can see that in inspiration there is an early period of maximally negative pressure, and something similar happens in expiration. The alveolar pressure trace here was reconstructed from the measurements of plateau pressure. 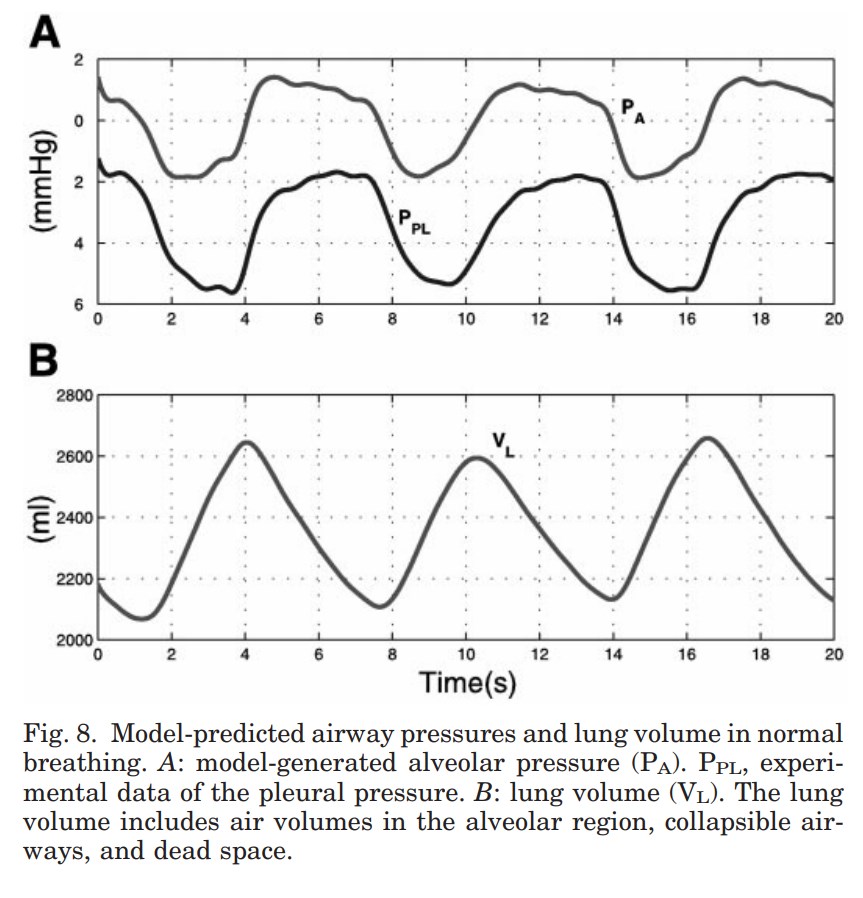 Anatomy of the pressure-volume loop

This is a pressure-volume loop of a patient on a volume-control mode of ventilation, which in normal ventilator (pressure-flow-volume over time) waveforms looks like this. The mode is mandatory; the control variable is volume, and the flow is constant.

The curve of optimal compliance

This is the part of the loop during which the compliance is linear; it is thought to represent the ideal pressure, at which the alveoli are all happily open and distending gradually as the pressure rises.

It is sometimes said that this is the airway pressure at which the resistance of the airways is overcome. In situations where airway resistance is very high, this inflection point is dragged to the right.

However, airway resistance plays a role throughout the inspiratory (and expiratory) curves, because there is flow. So long as there is gas flowing, and there are narrow tubes for it to flow through, their resistance will influence the pressure of that gas.

Thus, the lower inflection point mainly represents the critical opening pressure of the alveoli. The initial rapid rise in pressure is a reflection of alveolar recruitment. It takes more pressure to re-inflate a collapsed alveolus than it takes to distend a deflated one.

In ARDS, it has been thought that this lower inflection point suggests the PEEP you should set. Given that constant collapsing and re-opening of alveoli causes VILI, one should aim to constantly keep all of the alveoli at a positive pressure slightly above their critical opening pressure, so as to prevent de-recruitment. However in practice, the lower inflection point tends to over-estimate the ideal PEEP. Not only that, but it seems clinicians are very poor at determining where this inflection point is, when shown a PV loop. We tend to vary by as much as 11cm H2O.

But then... Is derecruitment not an expiratory phenomenon? Then why are we using an inspiratory limb of the pressure-volume loop to determine the optimal pressure to prevent de-recruitment?

This feature of the expiratory limb represents the elastic recoil of the lung tissue and chest wall which occurs when the ventilator cycles to expiration and the pressure drops back to PEEP. Obviously, at some stage during this curve alveolar derecruitment begins. But where?

It appears that the derecruitment occurs throughout this curve.

it is generally held that the rapid drop in pressure at the beginning of this curve corresponds to the deflation of the most hyperinflated lung units (which by virtue of being hyperinflated contribute the greatest deflation pressure). Thus, one might come to the conclusion that the most appropriate PEEP for these patients lies somewhere between the lower inflection point and the upper inflection point, corresponding to the best compromise between recruitment and hyperinflation.

The utility of all this

The difficulty in discerning the inflection points notwithstanding, there are other barriers to using these curves to guide your management of the noncompliant lung. The problem with ARDS is its heterogeneity; some bits of lung are aerated well and have surfactant, others are collapsed, and others are packed full of impenetrable hemorrhagic pus. Some bronchioles are patent, some are clogged with exudate, and some are squished by the weight of waterlogged lung above them. This heterogeneity leads to a smoothing of the classical S-shaped inspiratory pressure-volume curve. Go looking for an inflection point in this mess, and your estimates will vary by 11cmH2O just like the intensivists mentioned above.

The beak-shaped part of the curve, which lends it its penguin-like shape, is the region of pressure where rising pressure does not lead to increasing volume. Put simply, the lung is overstretched, at breaking point.

One can draw the conclusion that if it is tidal volume and minute ventilation you are after, then this part of the curve represents "wasted" pressure, which does not buy you any extra litres.

This is the pressure volume loop of some sort of well-behaved ideal patient, on a mandatory volume-controlled mode. 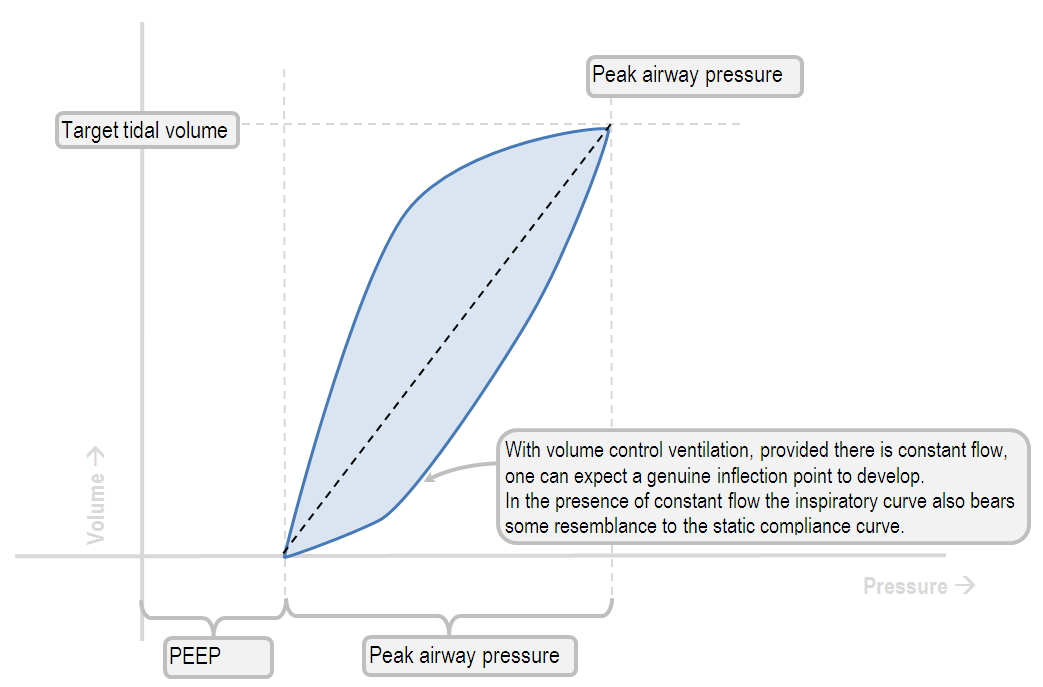 In this situation, the flow is delivered at a constant rate, which causes pressure to increase in a predictable pattern. There is an initial rapid rise in pressure as collapsed alveoli are recruited; then, there is a smooth increase in pressure up to the peak.

This is another idealised scenario. In this setting, the pressure is controlled, and changes in the rate of flow are used to maintain it at a certain level. In this setting one does not expect to derive a lot of useful information from the inspiratory part of the curve. It is impossible to tell what is happening in terms of alveolar recruitment because the flow is constantly changing (usually, on a decelerating ramp).

However, the useful feature of this is the satisfying flatness of the right side of the curve. Note how the penguins beak is missing. There is no alveolar overdistension in this scenario; in fact one can imagine the whole alveolar volume distending peacefully up to a certain volume.

This is the pressure volume loop of a pressure-supported breath from a patient on SIMV-PRVC, which features decelerating flow, a constant inspiratory pressure, and which is patient-triggered. 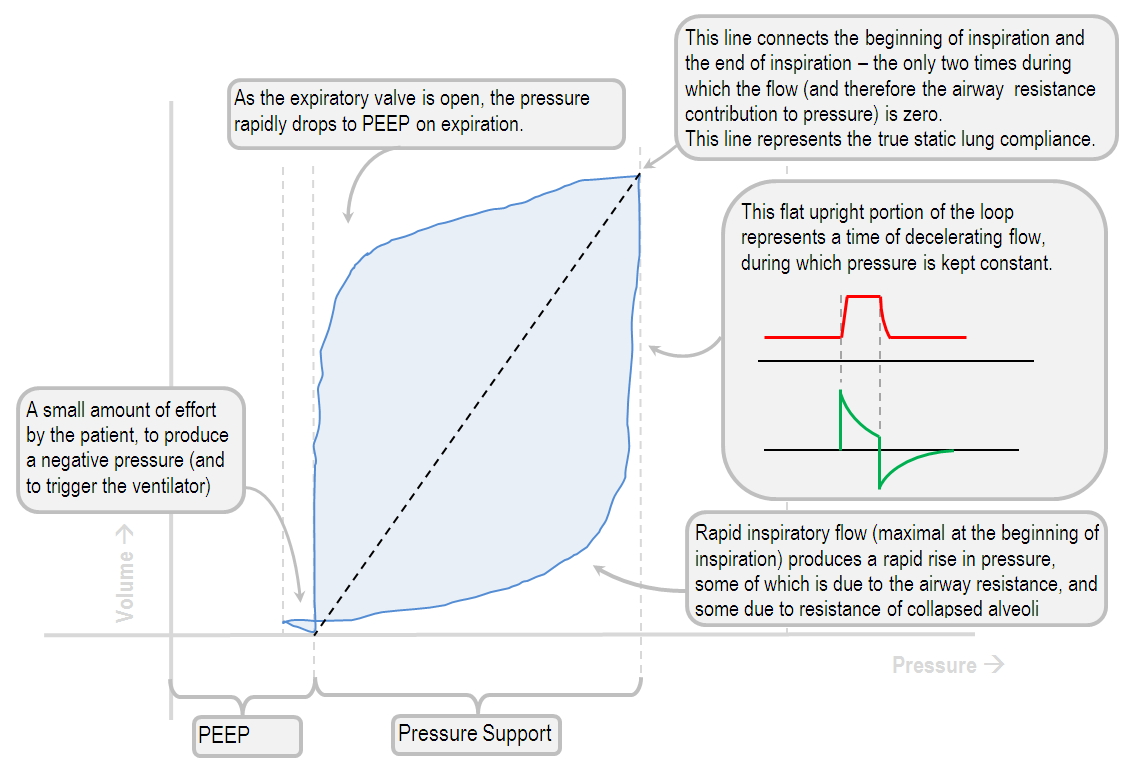 That's right. Where is that lower inflection point? Nothing is where it is supposed to be. The curvature of the inspiratory component is influenced by the flow rate, which is maximal at the onset of the breath; the decelerating flow rate makes it difficult to derive any useful information about the lower inflection point from this loop. All you can do is focus on the two points of the respiratory cycle where the flow is zero. Of these, the more interesting point is the end of inspiration: when you have both a volume and a pressure, from which you can estimate static lung compliance. Provided you halt the respiratory cycle here with a 2-3 second inspiratory hold (for lung units with different time constants to equilibrate) you could even call this the "true" static lung compliance.

Nahum, A. "Use of pressure and flow waveforms to monitor mechanically ventilated patients." Yearbook of intensive care and emergency medicine. Springer, Berlin, Heidelberg, 1995. 89-114.