Positioned on the end of the ETT, the capnograph should be able to pick up the expired carbon dioxide (EtCO2 ) in whatever  gas happens to be wafting past it, and this concentration is recorded on a graph. This is plotted as a very useful waveform.

In the CICM Part I exam, this is virtually unknown. Though the CICM Syllabus (2017) does expect the trainees to "describe the principles of capnography, including calibration, sources of errors and limitations" in Section F12 (ii), there is no mention of the waveform or what meaning it might have. The CICM Part II exam does have several questions on this, but by this point, the end-stage ICU trainee will be intimately familiar with it, and will only require this brief summary to act as a rapid revision resource.

Positioned on the end of the ETT, the capnograph should be able to pick up the CO2 in whatever gas happens to be wafting past it, and this concentration is recorded on a graph. 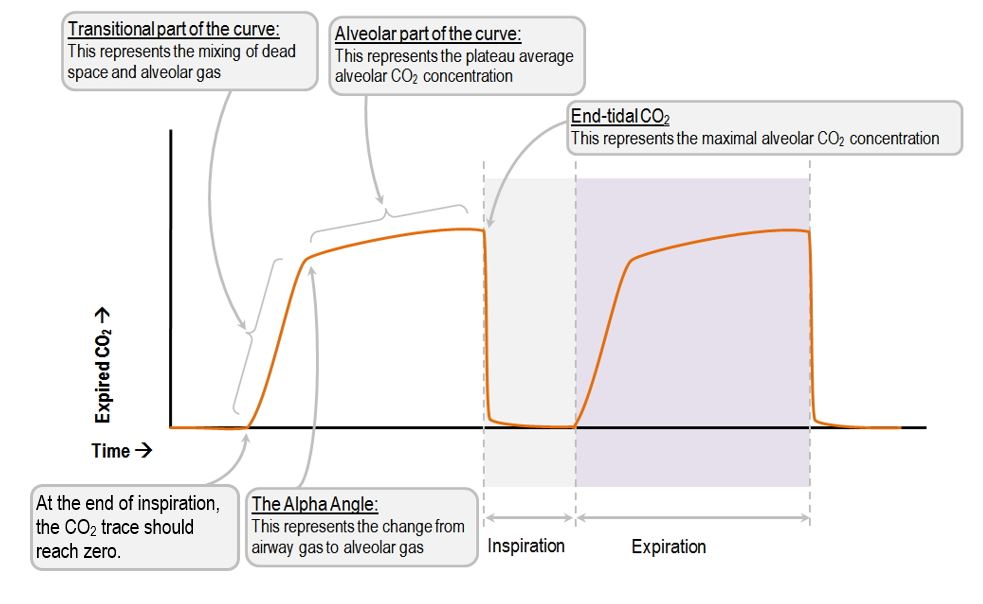 The pattern of CO2 concentration over time has features which give us some information about the gas movement in the airways and in the alveoli. These features, though they have no standardised names, are well recognised, and sometimes crop up in the fellowship exams as questions demanding certain waveforms to be graphed.

During inspiration, the CO2 value should be zero. The capnometer should be reading only the inspired gas, which should contain no more CO2 than the surrounding atmosphere.

This "baseline" value should never be above 2mmHg outside of some sort of horrific unventilated dungeon or mine shaft. In the ICU, we have precise control of CO2 concentration, and the inspired gas is not recirculated.

In anaesthetics, of course, the machine has a CO2 scrubber, which can become oversaturated. Under these circumstances, the baseline will begin to rise slowly. At this stage, one can call for more lime.

Transitional part of the curve

The expiratory valve opens, and the air held inside the patient rushes out of them, driven by the spring-like recoil of the chest wall and lung parenchyma. The transitional part of the curve represents the initial rush of dead space gas, where gas from the upper airways (poor in CO2) slowly gives way to mixed gas from the lower airways (richer in CO2).

The rate at which this happens determines the slope of this curve. And this rate is itself influenced by the resistance to airflow in the airways. Obviously, an obstructed bronchospastic airway will put up a greater resistance, causing the slope to decrease- the lower airway gas will take longer to waft past the capnograph. This produces the characteristic waveform of airflow obstruction.

This is the transitional point between airway gas and alveolar gas. Once the dead space has emptied, the elastic recoil of the chest wall and airways is all but spent. The remaining gas exchange is a passive mixing of the gas in the tubing and the gas inside the alveoli. This is registered by the capnograph as a gentle incline.

The Alveolar part of the curve

This is the gentle sloping plateau which represents the gradual diffusion of CO2 out of the alveoli, into the dead space gas, and up the ETT into the capnographs' field of vision. The slope of this curve gives some information regarding the stability of the lung volume during expiration; if the CO2 begins to drop during this phase, there is likely a gas leak somewhere, and it may represent a pneumothorax or a cuff leak.

This value represents the maximum expired CO2 concentration. This has some relationship to the actual alveolar CO2 concentration. Considering that a normal expiration is about 2-3 seconds, this gives plenty of time for the gases to reach equilibrium, and in an ideal situation at the end of expiration the gas in the tubes should be identical to the gas in the alveoli.

Of course, reality frequently differs from the ideal experimental setting. All that can be said is that in a patient with a reasonably stable airway diameter and no cuff leak, the end-tidal CO2 has a fixed predictable relationship with the alveolar CO2, and if you can calculate the "CO2 gap" between PACO2 and EtCO2 you can continue to use this gap to estimate alveolar CO2 without doing any more gases, at least for a few more hours.

As the inspiratory valve opens, fresh gas rushes past the capnometer, washing away the CO2. The CO2 concentration thus rapidly falls to zero. Provided you are ventilating your patient with a reasonably normal gas mixture, and in the absence of a dirty CO2 scrubber, the CO2 concentration should fall back to baseline, which is zero (or very near zero).

Bronchospasm typically does not influence this, as it is really only a problem in expiration, which is a low pressure affair. The powerful ventilator turbine overcomes the resistance of the spasming airways with relative ease, and the slope of this curve should remain nice and steep.

Not so in conditions of mechanical obstruction. if some sort of horrible tumour or goitre is causing airway obstruction, this obstacle is fixed, and the ventilator is powerless to overcome it. In this scenario, the inspiratory phase will be a gentle slope, as the ventilator fights to blow air into the patient.

The relationship of abnormal capnograph waveforms to lung pathology is discussed in the next section.

Most of this information comes from only two textbooks. With "Basic Assessment and Support in Intensive Care" by Gomersall et al (as well as whatever I picked up during the BASIC course) as a foundation, I built using the humongous and canonical "Principles and Practice of Mechanical Ventilation" by Tobins et al – the 1442 page 2nd edition.