Essentially, this chapter is a short list of reasons as to why your ABG (or venous biochemistry)  measurement may be wrong, i.e. not reflective of what is happening in the patient. In 99% of cases, it is a problem with the collection storage and transport of the sample, because these are factors which are subject to human input and thus human error. The self-calibrating blood gas analyser is a dutiful and dependable servant; some sort of failure in its internal workings will only rarely contribute to the error (and usually it will be because some idiot human has improperly calibrated it). Lastly, a tiny fraction of errors are begot by the physicochemical limitations of the measurement method (eg. when an absurdly high bromine concentration interferes with chloride measurement and returns a spuriously raised chloride concentration value). This whole thing enjoys a rich full discussion in the section dedicated to arterial blood gas analysis.

Sources of error due to inappropriate sample collection and handling

Source of error in blood gas collection and handling

Sources of error in venous biochemistry sample collection and handling

The consequences of a delay in sample processing

Question 3.2 from the second paper of 2015 presents the candidates with a venous blood sample which demonstrates characteristic features of a delay in processing. A good reference is a 2008 paper by Tanner et al, examining the delayed processing of samples collected in rural and remote areas. The studies have discovered that over 4-24 hours of storage various changes take place. These changes (and the reasons behind them) were as follows:

Escape of cellular contents due to haemolysis

An ideal reference for this exists in the Journal of Critical Care (Woolley and Hickling, 2003). It is unfortunately not available as free full text, but the author was able to get access to the article anyway, and summarise its contents.

The actual difference in reality is not that great.  It is possible to demonstrate this directly, in the following scenario. The two gases are arterial, taken at 35% FiO2 from an ICU patient; the sample was analysed once, then left next to the ABG machine for a half-hour or so, and then accidentally analysed again by someone who thought it was fresh. 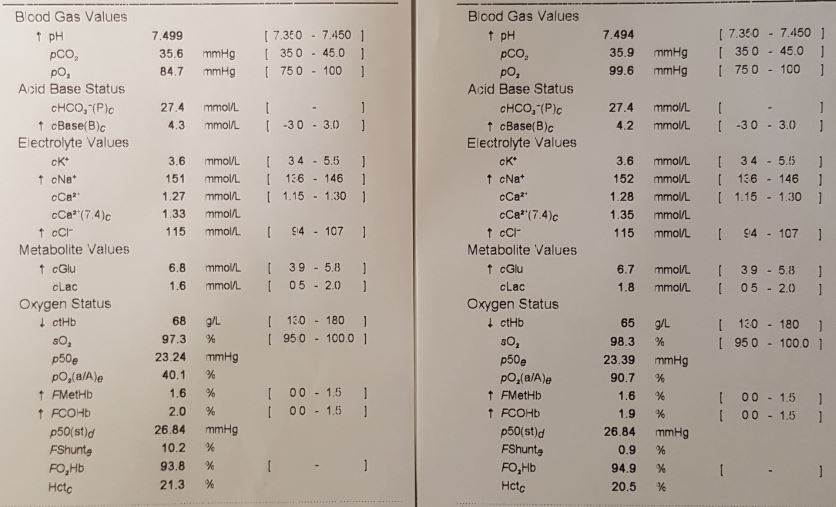 The sample on the left was first, the one on the right was the thirty minute delay. The ambient temperature was probably close to 20 degrees. As one can see, the differences are trivial. During that half hour, this anaemic patient's few remaining RBCs managed to metabolise only 0.1mmol/L of glucose, and produced a barely measurable increase in lactate and CO2.

Blasts in the sample: "leukocyte larceny"

This has come up in the exam only once, in Question 3.4 from the first paper of 2021. The college had asked for an explanation as to why the patient, whose SpO2 was 98%, had an arterial blood gas showing a PaO2 of 45 mmHg and an SaO2 of 67%. Conveniently, just before asking this question, they also revealed that his blood count was 52% blasts.

This spurious hypoxemia is usually referred to as "leukocyte larceny", on the count of the leukocytes being responsible for misappropriating all the oxygen in the sample during its transport. It is described in some detail by Sacchetti et al (1990) and Fox et al (1979), of whom the latter appears to be responsible for coining the expression. According to the data collected by Fox et al, the rate of metabolism can be very rapid. For blood samples with the highest WCC counts, the investigators observed a PaO2 drop of up to 72 mmHg.

Heparin of any sort: Given its extreme anionic charge and near-total dissociation at physiologic pH, it would be surprising if heparin failed to interfere in some way with the strong ion difference in a blood gas sample. Indeed, it would appear that even a "thin film" of it skews the results in the direction of a metabolic acidosis. The quoted study is from 1985, a grim and primitive age when intensive care staff would have to manually heparinise the ABG syringe prior to collecting the sample, sending it to a distant analyser with a porter.

​Lithium heparin: Cations other than sodium could potentially exist in the sample in such concentrations as to fool the supposedly sodium-selective ceramic electrode membrane. Of these the most likely culprit is lithium from lithium heparin. These days the arterial blood gas syringe typically contains a very small amount of dry heparin, about 20-25 units per ml.

Halogen ions: the measured Cl- increases in presence of halogen ions, such as bromine and iodine. This is a selectivity failure of the supposedly selective chloride-sensitive electrode membrane, which will accept any halogen if their concentration is high enough.

Haemolysis: because the ABG machine shreds the red blood cells with 30Hz ultrasound in order to get to their haemoglobin, it will not notice if there is already free haemoglobin in the bloodstream (eg. due to haemolysis).

The amperometric measurement of lactate using the lactate-sensitive electrode relies on the use of lactate oxidase. This enzyme catalyses the reaction which converts lactate into pyruvate, producing hydrogen peroxide which is reduced at the measurement cathode. Glycolic acid, the metabolic byproduct of ethylene glycol metabolism, also acts as the substrate for this enzyme. Therefore, in ethylene glycol poisoning the lactate measurement by the blood gas analyser will be spuriously elevated. The formal lactate measurment by use of a lactate dehydrogenase enzyme assay will still yield a correct result. The difference between the "formal" and the ABG lactate is described as the "lactate gap", and is a well known phenomenon of ethylene glycol toxicity. This source of ABG error is made famous by its use in a classic ABG question (Question 1.12) from the 2003 edition of Data Interpretation in Intensive Care Medicine by Bala Venkatesh et al. It had also made an appearance in Question 20.2 from the second paper of 2017. Interestingly, the Reference Manual for the local ABG analyser lists a large number of molecules which can potentialy cause interference with lactate measurement- notably ascorbic acid, bilirubin, citrate, EDTA, ethanol, heparin, glucose, paracetamol, salicylate and urea.

Hyperlipidaemia: which in general tends to produce unusual reading in the spectrophotometer, giving rise to abnormally high total haemoglobin readings and negative carboxyhaemoglobin numbers. These extra fatty acids tend to scatter the light, interfering with the absorption spectrum and giving the impression that a lot more light has been absorbed. This can be seen in central venous gases taken accidentally from the TPN lumen. The elevation is typically modest - the author's own recent experience with a pancreatitis patient yielded a serum triglyceride level of 39.9, and a paltry FMetHb of 2.4%. One would obviously need a truly monstrous hyperlipidaemia.

Isosulfant blue: otherwise known as "patent blue" - a dye used in surgery to identify lymphatic vessels, eg. for sentinel node biopsy- causes the same sort of problem: it is blue enough to interfere with spectrophotometry.

Influence of albumin on acid-base interpretation

Question 9.3 from the first paper of 2021 asked about the ways in which albumin influences acid-base analysis. The specific question was about hypoalbuminaemia:  "how does this finding alter your interpretation of acid-base data?" The basic premise is that plasma proteins, among which albumin is the unquestioned king, are largely non-volatile acids, and loss or gain of albumin leads to alkalaemia and acidaemia, respectively. For a more thorough overview of the biochemistry behind this, as well as for experimental data which describes the magnitude of this effect, one is directed to the excellent paper by Rossing et al (1986).

Anion gap measurement: Albumin probably contributes about 75% to the total anion gap value, which means hypoalbuminaemia should result in a smaller anion gap. Thus, when analysing an anion gap result, one needs to down-adjust one's expectation of what a normal anion gap should be for the hypoalbuminaemic patient. For this, there are multiple possible equations, but the easiest to remember is the 4:1 rule: for every 4g/L decrease in serum albumin, the normal expected anion gap decreases by 1. Thus, at an albumin of 32, the expected anion gap is 10 instead of 12.

Delta ratio calculation requires the calculation of the anion gap, and is therefore influenced by hypoalbumnaemia indirectly.

SIDe is normally -40 mEq/L;  a low albumin will decrease the SIDe, and therefore increase the strong ion gap.  However, the ionisation of albumin is different, depending on the pH, and this also needs to be adjusted:

and the main reason it is mentioned here is because one of the et al was Rinaldo Bellomo.

Base excess gap, another mathematical tool which looks for unmeasured anions or cations,  will therefore also be affected by albumin levels. This gap is calculated using the following equation:

where BEcalcuated is a base excess value adjusted by a sum of contributions from sodium chloride free water protein and albumin. Ergo, albumin plays a minor but important role in this gap.

Of particular interest is this pamphlet released by Radiometer, about avoiding preanalytical errors in blood gas testing.