Of the cardiology questions in the Part II exam, a large proportion consists of ECG interpretation exercises. The following is a list of such questions. As you can see, they were virtually unknown prior to 2005. These days, it seems the college is trending towards more "data interpretation" style questions, which are easier to mark. With this, ECG and ABG questions proliferate.

Here is a list of all ECG questions in recent history (whatever the value of that might be).

There really is no satisfactory way to short-cram in preparation for such questions. One might be tempted to make the facetious remark that people at this level of training would be confident in ECG interpretation, and that no further preparation would be required for the true ICU fellow in the final stages of their training. One might even say that good solid basic knowledge is the key to success in this ECG interpretation section. Of course, this would be complete bullshit. The College seem to have a database of perhaps twenty or thirty ECGs. The cynical trainee will focus on becoming familiar with this selection. If a repeat question comes up, the cynic will be rewarded for counting on the lazyness of  question writers. If the ECG is brand-new, the cynic will not be disadvantaged any more than anybody else.

In the spirit of cheating and cynicism, the following is a list of ECG abnormalities which have appeared prominently in the previous papers. Many of these abnormalities are covered in other chapters (also listed below) but many are not, and so thay have all been lumped together in this page.

This is an ECG of RV hypetrophy stolen from LITFL.

Other abnormalities caused by RVH Characteristic features (if on were called upon to describe them) include the following:

The  "Retrospective review of the frequency of ECG changes in hyperkalemia" by Montague et al (2008) somewhat devalues these questions. Among a case series of ninety hyperkalemic patients, the ECG was neither sensitive at detecting hyperkalemia, nor able to predict hyperkalemic complications.

The specific features are: Occasionally (eg. in Question 15.1 from the second paper of 2017) the college asks as to how this conduction abnormality is relevant. For instance, in the aforementioned question the pretext for the ECG is a history of syncope and fractured neck of femur. How could this have happened, one might ask. Well; these people classically progress to complete heart block. It does not require a great stretch of the imagination to conceive of this as a possible outcome given that pretty much all of the conduction system is diseased. One is practically running on just one fascicle. Once that breaks, no conduction down the bundle of His will make its way into the LV, giving rise to a complete heart block (albeit with a potentially well-functioning AV node). The solution, predictably, is a permanent pacemaker.

Question 10.2 from the second paper of 2009 presented the candidates with a scenario where a patient  with obvious St segment elevation is comfrotably pain-free. This is an LV aneurysm.

Another similar question (except not pain free) is Question 18.1 from the first paper of 2014, where the patient seems to have had an MI about a week ago. In both cases, the characteristic feature is persisting ST elevation after an MI. Rosenberg et al described this back in 1949. A more modern blog entry by Dr Smith discusses LV aneurysm complicated by RBBB.

MAT has appeared in Question 18.3 from the first paper of 2014. It is also known as "Chaotic Atrial Rhythm".  It enjoys a thorous exploration in John Kastor's 1990 article for NEJM.   Lipson and Naimy offer more detail in Circulation (1970). A nice short-form summary of paediatric MAT is also offered by Bradley et al (2006). The cardinal features are irregularity and a plethora of different P-wave morphologies.

You need to have

The same findings with a normal heart rate does not qualify for MAT, because it's not tachycardia; you have to call that a "wandering atrial pacemaker".

The CICM question also asked for associated diseases.  In adults, MAT is almost uniformly associated with COPD. Not only are the atria stretched by pulmonary hypertension, but the proarrhythmic bronchodilators also make for an irritable myocardium.  In the paediatric population the differentials are more broad, including bronchiolitis, croup, bronchomalacia, etc.

Question 6.3 from the second paper of 2011 presented only SVT. Question 30.1 from the first paper of 2015 wanted the candidates to discriminate between VT and SVT with aberrancy. The latter being more interesting. The LITFL page on distinguishing VT from SVT with aberrancy is an excellent and highly detailed resource for this issue.

Question 6.1 from the second paper of 2014 pulled out "Wellens Sign", which is the ECG sign of proximal LAD occlusion. The sign is characterised by deep symmetrical T-wave inversion in V2, V3 and V4.

Professor Hein JJ Wellens co-authored a publication on this topic (Zwaan et al, 2000) but I am pretty sure the sign was already named after him before this paper.

Question 6.2 from the second paper of 2014 demonstrated pericarditis. The question presented us wth a young man who was experiencing atypical chest pain.

There are only two characteristic features of pericarditis woth remembering:

Benign early repolarisation is a valid differential for this appearance, and is offered in the college model answer.

Again, this is one of those rapid pattern recognition exercises. One you have seen it, you will never forget. Question 26.1 from the first paper of 2011 shows us a straightforward case, and Question 30.1 from the second paper of 2012 puts it in the context of AF to make things difficult.

In ideal conditions, electrical alternans should look like this:

The phenomenon is caused by the heart swinging back and forth inside a pericardial cavity which has become distended to the size of a small aquarium. The swinging between beats changes the position of the conductive tissues relative to the stationary chest leads, and results in different (and regularly alternating) QRS morphologies.

This was seen in Question 18.3 from the first paper of 2013, an ECG of an elderly woman found collapsed in the bathroom.

Specific findings associated with hypothermia are discussed in a good article by Mattu et al (2002). They include:

Question 18.2 from the first paper of 2014 was the only appearance of Brugada Syndrome. This autosomal dominal "channelopathy" is among the most easily recognisable ECG abnormalities, alongiside STEMI and hyperkalemia. The problem lies in a dodgy sodium channel; 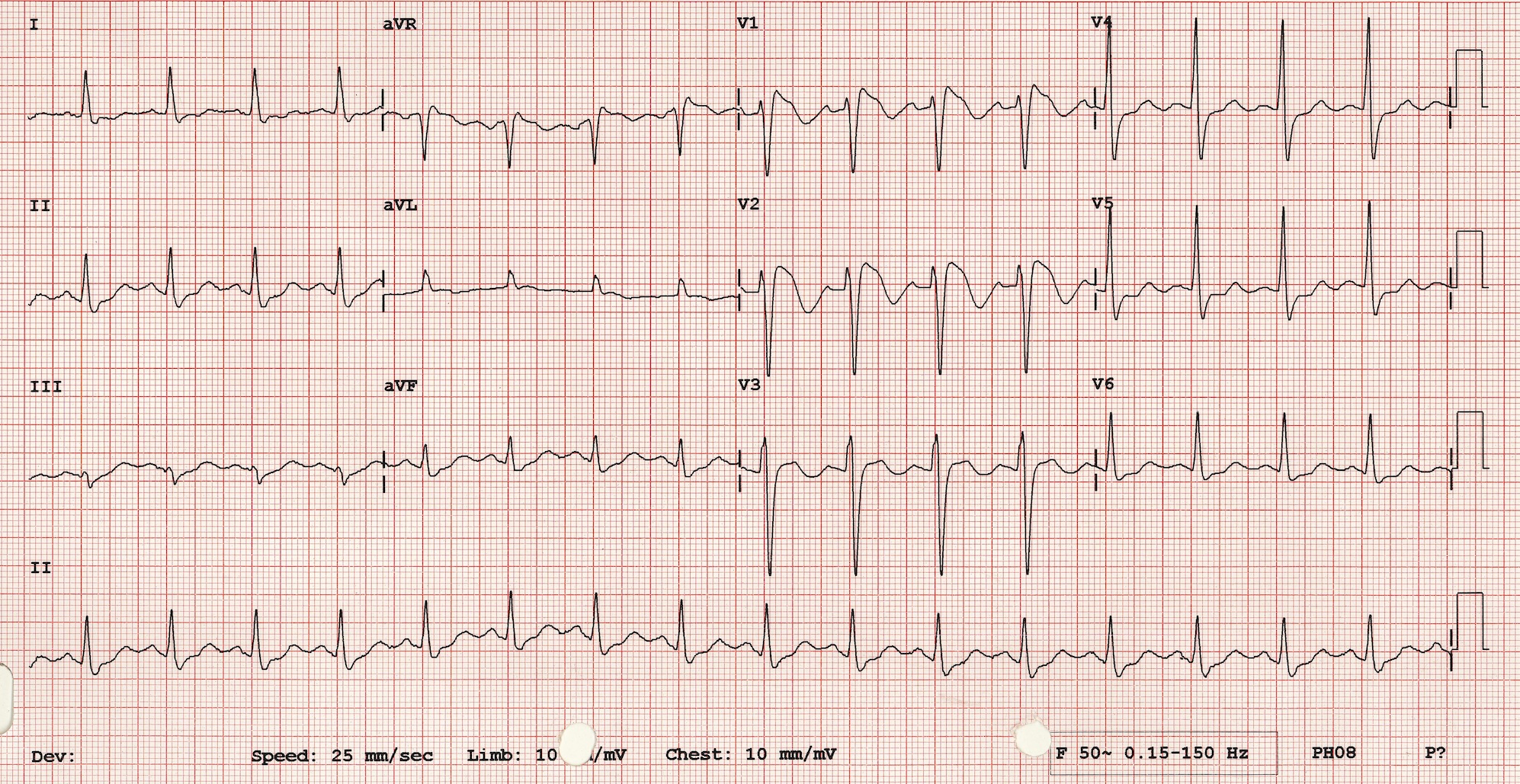 The characteristic ECg findings mentioned in the college answer are "coved" ST segments in leads V1 and V2, with a degree of ST elevation. "Coved" is a weird term to use for this, as the standard definition of "cove" is "a small indentation or recess in the shoreline of a sea, lake, or river". Essentially, the QRS complex finishes high, and the ST-segment slopes diagonally to form an inverted T-wave.

The criteria for the diagnosis of Brugada syndrome as well as  are explored to a fascinating depth by Edward Burns in his article for LITFL. Additionally, there is an excellent 2012 update on this syndrome, co-authored by one of the Brugada brothers. However, the time-poor exam candidate will lose interest in large blocks of text. Point-form summaries ensue:

Clinical situations which can worsen this condition: The characteristic features of RV strain are: 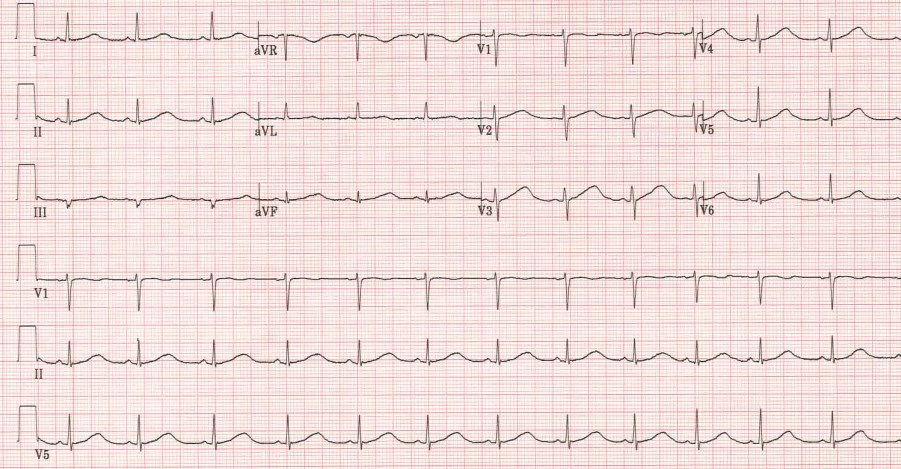 TheQT is prolonged (it is about 512 msec in its uncorrected state, or 585 corrected for heart rate).

Differentials, according to Harrigan & Chan (2009), include:

From "the ECG made easy", by Hampton (2003), and ECGs shamelessly stolen from Life in The Fastlane without any sort of permission, but in the non-commercial spirit of free education

Engelen, Domien J., et al. "Value of the electrocardiogram in localizing the occlusion site in the left anterior descending coronary artery in acute anterior myocardial infarction." Journal of the American College of Cardiology 34.2 (1999): 389-395.

Harrigan, Richard A., and Theodore C. Chan. "| What is the ECG differential diagnosis of a prolonged QT interval?." Critical Decisions in Emergency and Acute Care Electrocardiography. Oxford, UK: Wiley‐Blackwell, 2009. 479-482.