Use of troponin in critical illness

Cardiac biomarkers come up  frequently, but to be honest these questions have generally been referring mainly to troponin. Observe:

This is an enzyme involved in the excitation-contraction coupling of the myocardium.
Troponin T serves to attach the troponin complex to actin and tropomyosin.
There is a cytosolic pool (which is released early in the infarct) and a structural pool (which is slowly released over days as the damaged myocardium decomposes)

Utility of troponin as a cardiac biomarker 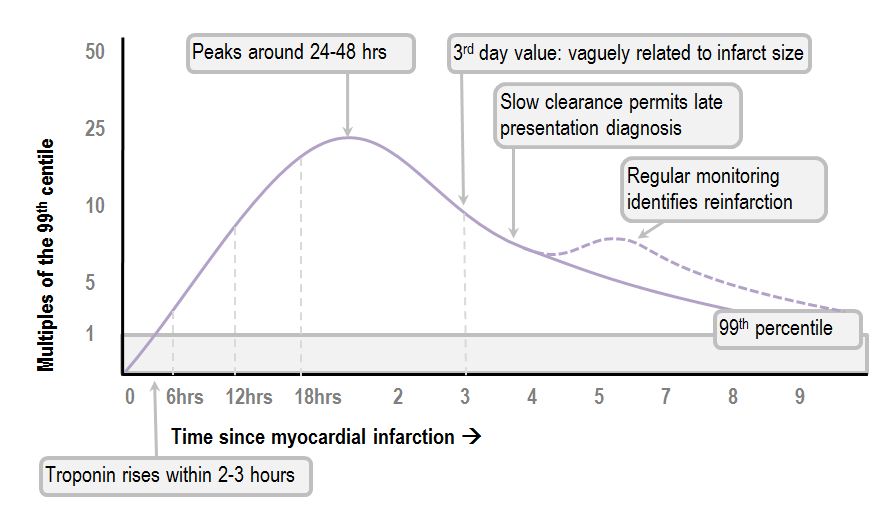 Troponin use in acute coronary syndromes among critically ill patients

The ECS and AHA universal definition of an acute coronary syndrome consists of a troponin rise as well as a demonstration of ischaemic symptoms, echocardiographic evidence, or ECG changes.  The troponin levels are not diagnostic, but are a risk stratification tool to be used together with echocardiography, ECG, history and examination.

In critical illness, troponin has specific useful applications. Troponin levels can be used to monitor for myocardial ischaemia in critically ill patients when history and examination are unreliable. These people can't get up and tell you about their classical left-sided crushing chest pain. Troponin levels can also  be used for the late diagnosis of MI and to monitor for reinfarction.  The use of troponin as a part of a risk stratification strategy is important in ICU because careful selection of  patients for anticoagulation and anti-platelet therapy prevents their exposure to unnecessary bleeding risk.

In STEMI, the GUSTO-III investigators found that the admission troponin level was an independent predictor of 30-day mortality. A pooled analysis of about 18,000 acute coronary syndrome patients has revealed that any troponin elevation increases the risk of death (OR = 3.44). The same goes for NSTEMI.

Influence on prognosis of non-cardiac patients

Qualitatively raised troponin is associated with a poorer outcome in the critically ill patients, irrespective of whether they have been diagnosed with an acute coronary syndrome or not. It is not quantitatively validated outside the setting of ACS / AMI, but qualitatively a troponin level raised above the diagnostic "positive" threshold is just bad news if you are a critically ill patient. Ammann et al (2003) demonstrated this among a small population (n=58); the mortality difference was quite startling, 22.4% vs 5.2%. Various other studies of similar scale have also found quite a large mortality difference. For example, Liu et al (2015) measured the mortality difference as 35% vs 12% among 40 critically ill patients in New York (remember, none of these people are having heart attacks).  Perhaps the scale of the study has amplified the effects? A recent meta-analysis (Amna et al, 2014) complied the results of twenty-seven such studies, not specific to the critical care environment (all hospitalised non-cardiac patients were included). Elevated troponin was associated with increased in-hospital and 30-day mortality (n= 7255 patients, OR = 3.88) as well as increased risk of long-term mortality at 6 months (n=   5368, OR = 4.21).

Non-ischaemic causes of a raised troponin

In their 2006 article, Korff et al offer an excellent table of things which cause troponin elevation, together with the mechanism of troponin release or assay confusion. Their Table 1 is reinterpreted here.

There is also some evidence that first and second generation assays have similar reactions to skeletal and cardiac isoforms of troponin, which might give rise to a raised troponin level in the absence of cardiac damage, but in the presence of skeletal muscle damage. Some cross reactivity of antibodies used in commonly available immunoblot or ELISA assays was present in the early days. More recently, this has not been an issue. Rather, it has been seen in various weirdopathies (eg. Pompe disease, a glycogen storage disorder). Wen et al (2016) were able to clone a bunch of cardiac troponin from these people's skeletal muscle, where it is abnormally expressed.  This is not normal and should not be expected in usual practice: Wen et al were also able to demonstrate the absence of cardiac troponin in the quadriceps muscles of healthy volunteers. Having said that, healthy people's skeletal muscle can also express troponin isonforms which resemble cardiac troponin well enough to fool the modern assays, particularly during rapid muscle regeneration - such as during recovery from rhabdomyolysis (Sribhen et al, 2012)

Question 6 from the first paper of 2017 presents the candidates with a scenario where a middle-aged lady on high dose vasopressors ends up with a troponin leak, a level over 10 times higher than the normal range (i.e. about 150 nmol/L for the high sensitivity assay). What is the meaning of this, ask they examiners, and how will you manage it?

In summary, there are four possible ways to interpret a raised troponin in a septic patient.

It may be totally meaningless:

It may represent an acute coronary syndrome:

It may identify patients with septic cardiomyopathy:

It may be a predictor of increased mortality:

This article has a nice graph of cardiac biomarker concentrations over time after an infarct:
Wu et al; National Academy of Clinical Biochemistry Standards of Laboratory Practice: Recommendations for the Use of Cardiac Markers in Coronary Artery Diseases. Clinical Chemistry 45:7 1104 –1121 (1999)

There is a CICM fellowship question regarding the critical appraisal of troponin in the ICU population.

The ECS and AHA statement referred to in the college answer is this article published in Circulation in 2007:

This article from Current Opinion in Critical care (2004) discusses the various causes of raised troponin among ICU patients:

The fact that troponin rise among the critically ill population is associated with a poorer prognosis is supported by this study:

Suarez, Keith, et al. "TROPONIN TESTING IN PATIENTS HOSPITALIZED FOR SEPSIS IS ASSOCIATED WITH INCREASED CARDIOVASCULAR TESTING AND LENGTH OF STAY." Journal of the American College of Cardiology 67.13 (2016): 451.

Sheyin, Olusegun, et al. "The prognostic significance of troponin elevation in patients with sepsis: a meta-analysis." Heart & Lung: The Journal of Acute and Critical Care 44.1 (2015): 75-81.