In spite of the fact that this condition is incredibly common, there have been no college SAQs interrogating the trainees' understanding of the diagnosis and management of diastolic heart failure. All SAQs have focused on systolic failure, mainly of the left ventricle, because for some reason this is a more sexy topic. IABP, inotropes and ECMO are deployed to attack systolic dysfunction, whereas diastolic failure is managed by quieter, less exciting methods, often in the background, at the clinic or on the ward. In spite of minimal exam significance, and for no reason other than the author's fascination, an entire chapter here is wastefully dedicated in homage to this underappreciated entity.

Pfeffer et al (2019) is probably the best single resource for this topic. Adelino Leite-Moreira (2006) has some of the best physiology explanations. The best pragmatic recommendations for the management of an ICU patient with diastolic failure come from a 2007 article by Pirracchio et al as well as  Ryu & Song (2017). LV end-diastolic pressure-volume relationships are also discussed in the section on PV loops from the First Part Exam cardiovascular section.

What exactly the hell is it? It is hard to track down answers because the AHA has bedevilled the literature with some unfamiliar terminology. Whereas many trainees will have heard their senior consultants refer to diastolic heart failure, they probably will have never heard them utter the mellifluous term "HFpEF". This term ("Heart Failure with Preserved Ejection Fraction") was devised by the AHA to catch the rather large group (40%!) of patients with obvious signs of heart failure and a relatively normal systolic function. In contrast, the term "diastolic heart failure" was devised by nobody in particular, and means nothing specific. "It was assumed that since systolic function was “preserved” the problem must lie in diastole",  Aziz et al (2013) report, "although it is not clear by whom or when this assumption was made".

This HFpEF terminology is supposed to be somehow better than the term "diastolic heart failure" presumably because the latter lacks a formal definition. It would therefore be logical for the AHA to endorse a definition for HFpEF which is semantically superior. Instead, their 2013 statement (Yancy et al, 2013) makes vague references to various challenges in putting together any such definition, and then references an article by Vasan et al (2000) which proposed defining criteria for diastolic heart failure:

The main reasons behind changing the terminology from "diastolic failure" to "HFpEF" is the fact that diastolic function is difficult to measure objectively, which means Vasan's 3rd criterion would rarely be satisfied by any patient. Moreover, the definition should have some relationship to a causal pathophysiology, and this one does not. Additionally, many patients with diastolic LV dysfunction have no symptoms of heart failure, and some patients diagnosed as having diastolic heart failure do not have abnormal diastolic function.  The limitations of both definitions are discussed by Zile (2003), who ultimately comes to the conclusion that in short, HFpEF and diastolic heart failure are essentially the same thing, as the dominant pathophysiological mechanism of clinical manifestations is some failure of diastolic relaxation in the majority of cases. In short, it can be assumed that since systolic function is “preserved” the problem must lie in diastole. It is therefore not essential to measure diastolic function objectively to make the diagnosis, though it may still have merit from the perspective of observing the response to therapy and assessing prognosis.

The gold standard for measuring diastolic dysfunction is echosonography. In case one ever requires an official document, the criteria for measurement are described by the ASE/EACI (Nagueh et al, 2016). At risk of trivialising the mighty art of critical care ultrasonography, an oversimplification suitable for the time-poor exam candidate would be to say that diastolic function is measured with the use of the mitral inflow E/A ratio.

The E/A ratio is measured by measuring a pulse wave Doppler across the mitral valve in an apical 4-chamber view: 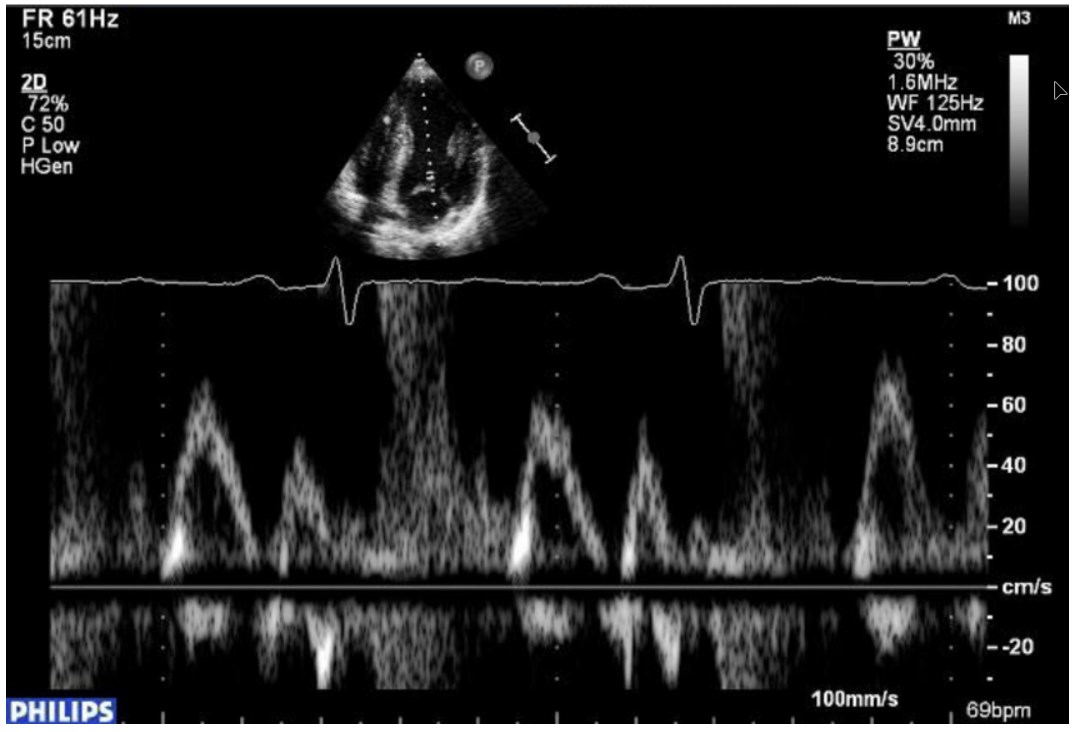 The E wave is the early diastolic filling wave, which describes left atrial filling pressure. This is the blood flow early in diastole, which occurs immediately after the mitral valve opens following isovolumetric relaxation. 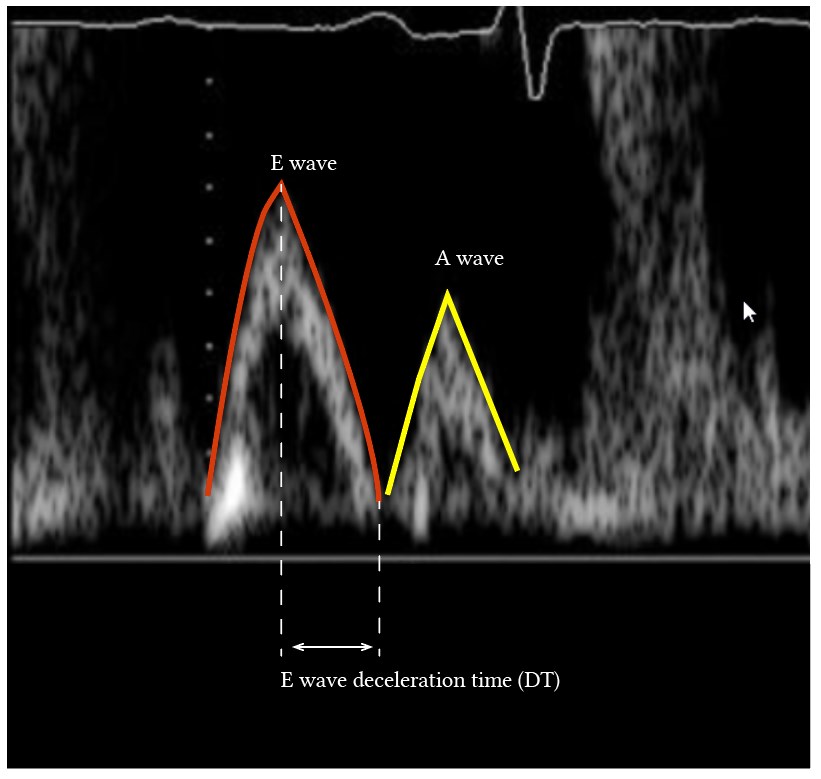 The E wave also has a deceleration time (DT) parameter, i.e. the rate at which the flow decays after the mitral valve opens. This represents the rise in LV pressure during diastole; obviously the more rapid the rise in pressure (the shorter the DT), the less diastolic filling there is going to be.

The A wave is the late diastolic wave, which represents the atrial "kick". This is affected by LA pressure and LV compliance at the end of diastole, and also by atrial contractility and rhythm (i.e. one should not expect this in AF). If an A-wave is present and the patient has diastolic dysfunction, the A-wave is shorter in amplitude and in duration. 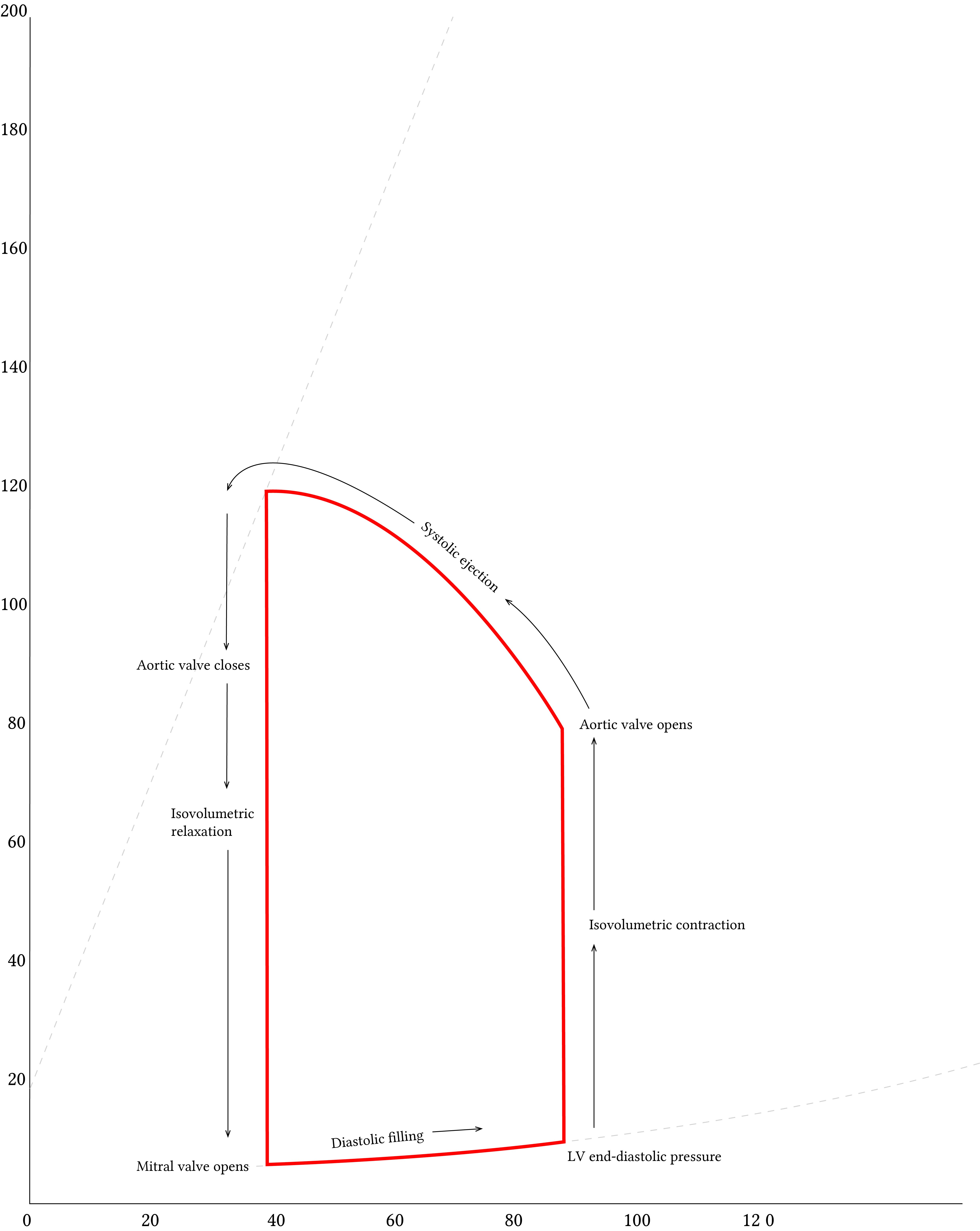 Anyway. Here's what an LV pressure-volume loop looks like when the diastolic relaxation is impaired. The shape of the curve is borrowed from a paper by Zile et al (2004); they took real measurements from patients with varying degrees of diastolic dysfunction. 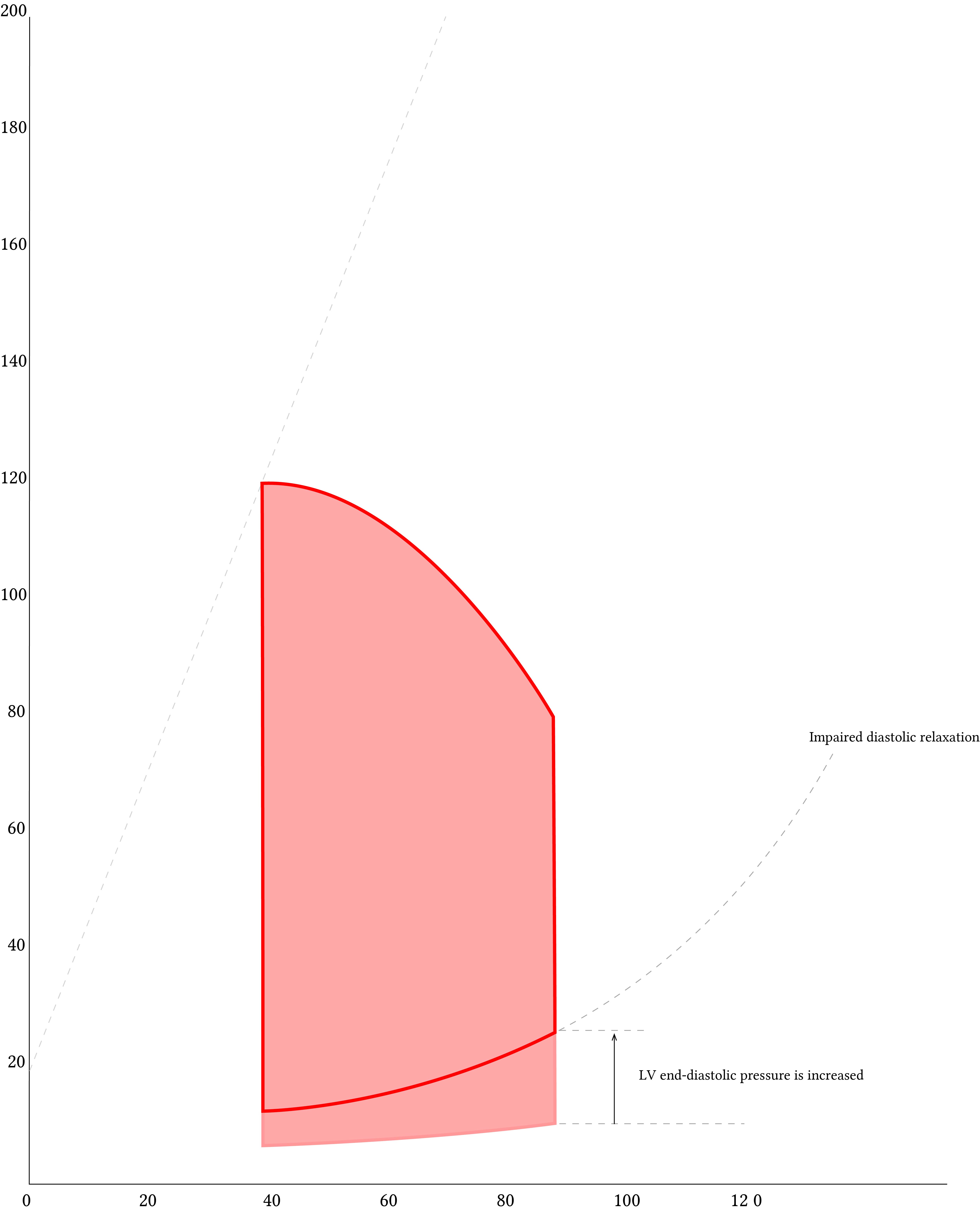 Now, this is the picture when LV hypertrophy or some other cause is increasing left ventricular elastance. Everything else is the same but the end-diastolic pressure is higher, with predictable effects on the left atrium (dilatation) and the pulmonary venous pressure (it increases).

Now, let us see what happens when we increase preload. 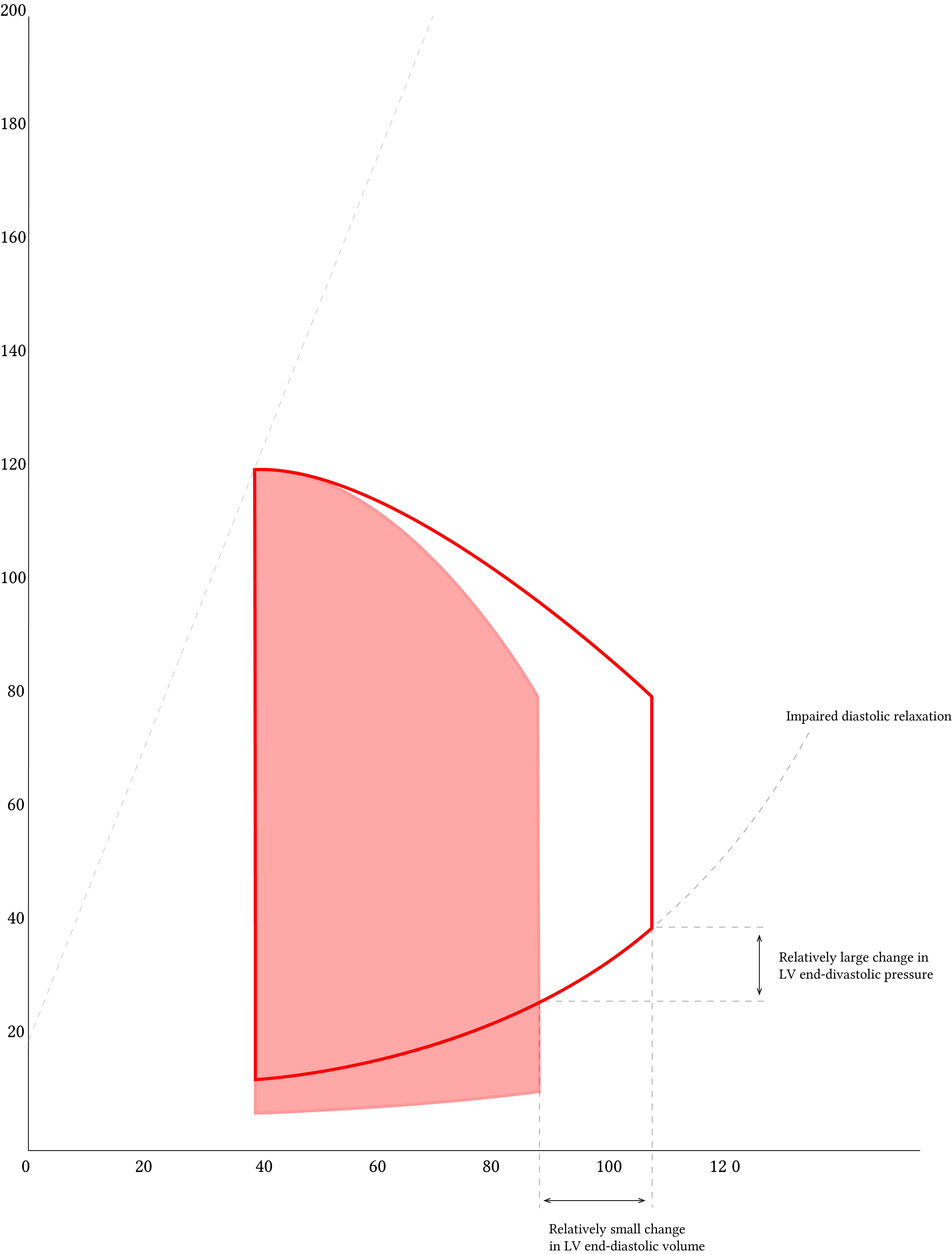 Following the same slope of the pressure-volume relationship, the increased preload results in a greater stroke volume at the cost of a much greater LV end-diastolic pressure. The consequence of this is predictable: the left atrium and pulmonary veins will dilate, and pulmonary oedema will ensue. The relatively large change in LVEDP in response to a relatively small change in preload describes the sensitivity of these patients to fluids: small boluses can push them into pulmonary oedema.

Now let us see what happens when we leave the preload alone, and increase afterload instead. 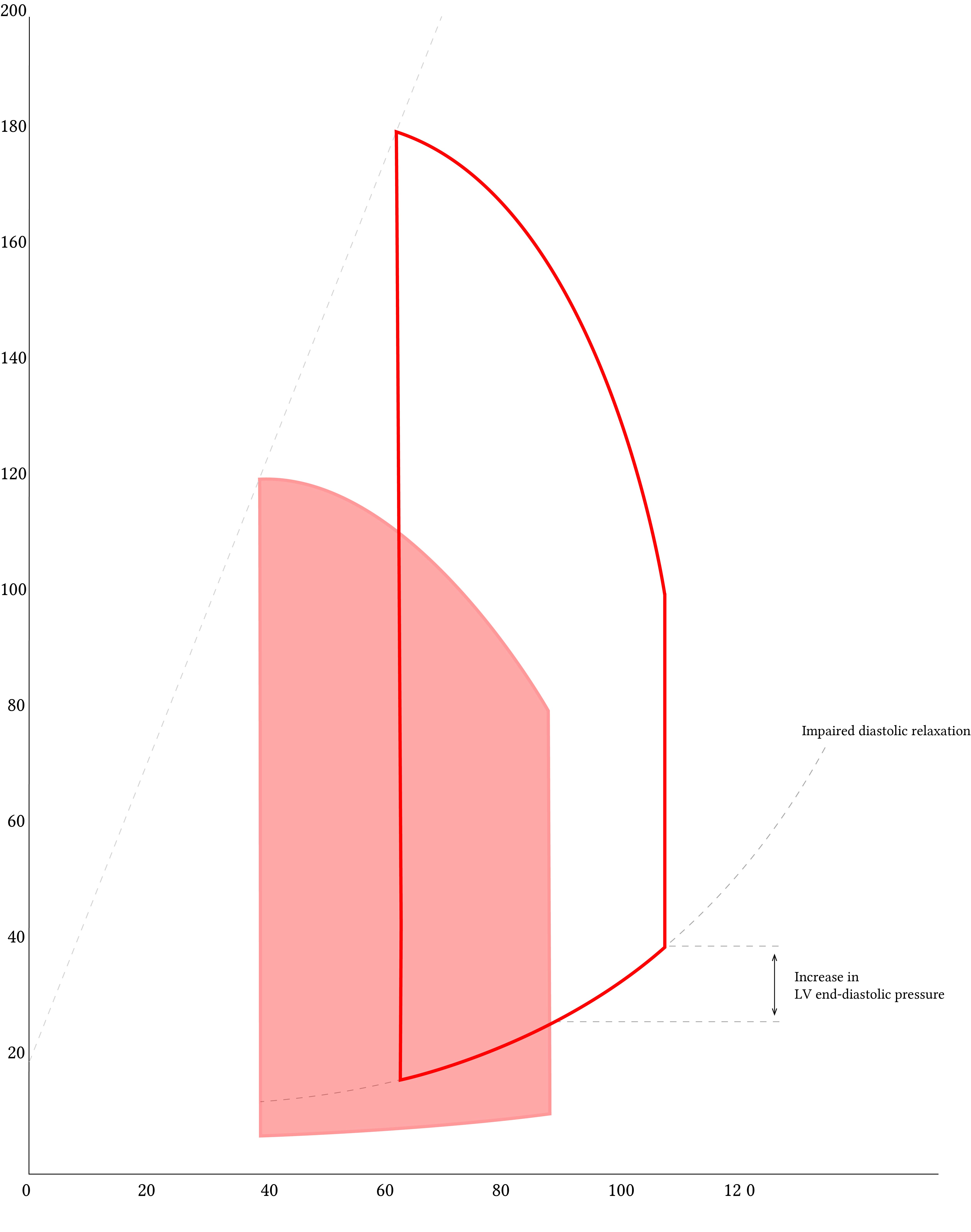 Now, consider also the effect of heart rate. A poorly compliant ventricle will become even more poorly compliant at an increased heart rate. In short, the  Tarumi et al (2010) found that in HOCM patients, tachycardia pacing (to a goal rate of around 150) increased the LVEDP by about 12-15mmHg, and the shape of the PV loop shifted upwards, such that with tachycardia, at any given LV volume, the LV pressure was higher. 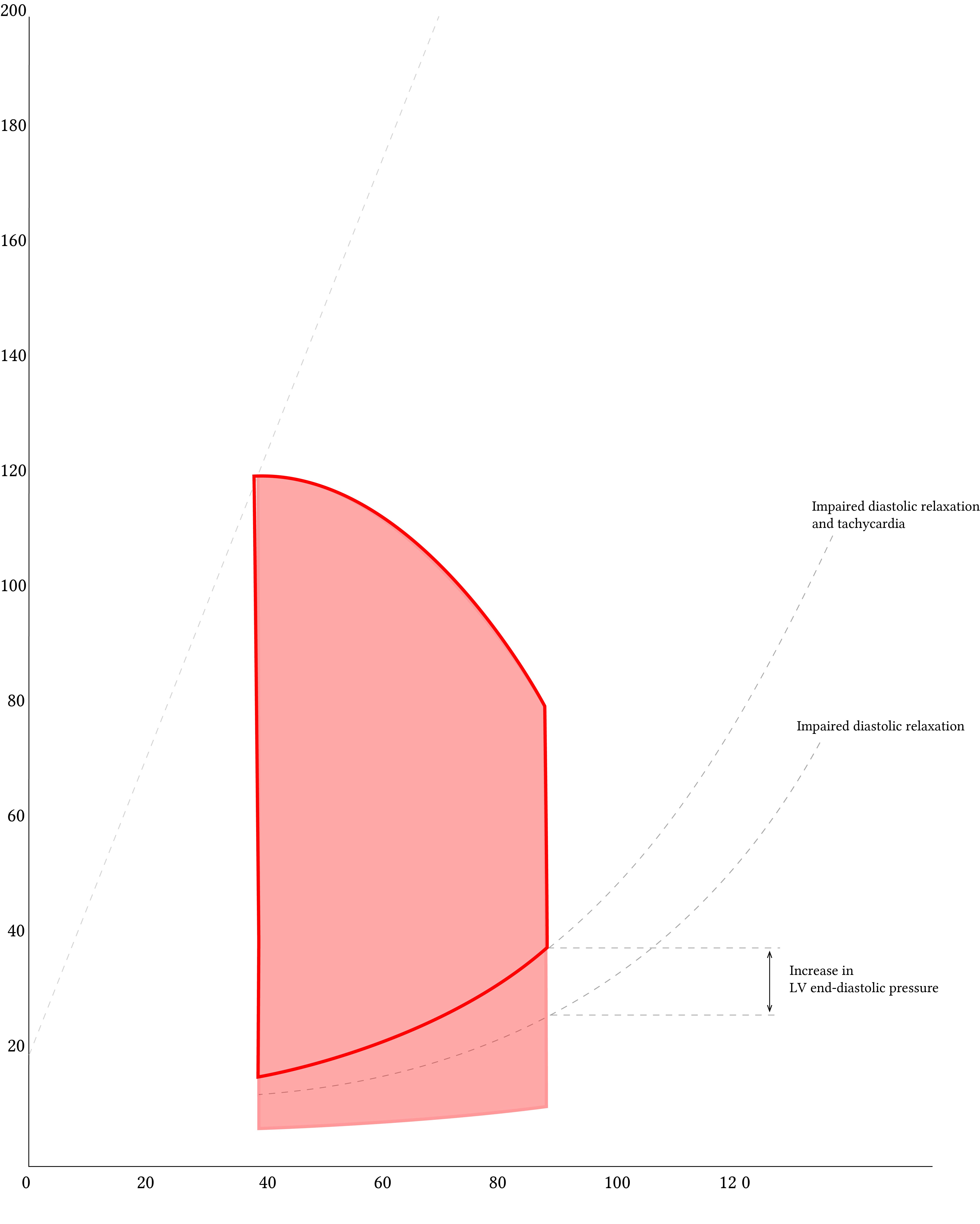 So, in summary, in diastolic dysfunction virtually everything produces an increase in the left ventricular end-diastolic pressure. These people are highly sensitive to increased preload (thus, pulmonary oedema from seemingly trivial fluid boluses). Increased afterload pushes them into APO by a similar mechanism. And tachycardia worsens the effects of both raised preload and raised afterload by its effect on ventricular elastance

Lots of things can cause heart failure while the ejection fraction remains normal. Gaasch et al (2004) offer a good table summarising the possible causes. With a few modifications, their list is offered here:

Problems with the structural characteristics of the ventricle:

With a relatively normal heart, where myocardial relaxation is unimpaired, diastolic failure can still occur in the following scenarios:

Preload reduction: fluid restriction and diuretics, as with all forms of heart failure, are the mainstay. In acute crisis, CPAP and positive pressure ventilation in general are very useful, as increased intrathoracic pressure addresses both the preload and the afterload in diastolic heart failure. According to Bendjelid et al (2005), the main benefit in diastolic heart failure is due to preload reduction, which is in contrast to systolic failure (where afterload reduction probably plays the dominant role). A small reduction in LV end-diastolic volume can often result in a dramatic reduction in end-diastolic pressures and symptoms, because of the steepness of the LV diastolic pressure-volume relationship curve.

Afterload control: maintenance of a blood pressure which is low enough to promote more normal LV diastolic pressures, but high enough to perfuse the hypertrophic myocardium. In general, a rapid drop would be as bad as a rapid rise. Ryu & Song recommend using 30%-50% of the normal induction dose of anaesthetic, as an example of how careful one should be. Thir recommendation is to aim for systolic blood pressure within 10-20% of the baseline value, and diastolic pressure over 70 mmHg.

Heart rate control: In short, keep it slow. Leite-Moreira et al (1999) determined that complete relaxation would take too long to be a practical goal (~170 msec in their experimental animals), as one would find oneself aiming for a physiologically ridiculous heart rate (20-30). As such, a modest reduction in heart rate should be the goal, i.e the aim is to keep the patient from becoming tachycardic.

Maintenance of atrial contractility: the trick is to keep these people out of AF, to which they are perpetually prone, owing to their massively distended left atria. It is of course not always possible.

Avoid inotropes and chronotropes: though catecholamines milrinone and levosimendan are generally held to be positive lusitropes, the benefit of increased ventricular relaxation is far outweighed by the disadvantage of the inevitable tachycardia. In any case, the ejection fraction is often preserved, which makes the use of inotropes counterintuitive.