Wolff-Parkinson-White syndrome is a relatively common preexcitation syndrome which has appeared multiple times in the Second Part CICM exam. Its appearances are usually of the same basic format. The trainees are usually posed with an ECG which bears a characteristic delta wave, and then asked to comment on the management of a tachyarrhythmia. The ECG interpretation is usually worth very few marks, because it is a boring exercise in pattern recognition for a very obvious pattern. The real test of character is in the decisionmaking around antiarrhythmic choice, when trying to address an acute SVT in these patients. As should become apparent from the discussion below, this is far from straightforward, as there does not appear to be any consistency in expert recommendations for best practice, nor in the college examiner comments.

Historical appearances of WPW in the exam include the following:

Specific issues asked about have included the characteristic ECG findings (short PR and delta waves), contraindicated drugs (AV nodal blockers like digoxin), and complications (SVT and sudden cardiac death). In brief, that's all you need to know. But of course many people (among them college examiners) would not be satisfied with a single sentence answer.  To address the issues of WPW in greater detail, one may need to refer to published literature. If one were pressed for time, one may safely limit one's reading to the LITFL page on WPW. If one were for some reason in need of greater detail, one might instead read the  UpToDate chapter on WPW.

Pathophysiology and ECG features of WPW

The result is a short AV conduction time, and an abnormal pattern of depolarisation, with some of the ventricular mass depolarising some milliseconds before the rest. Electrophysiology findings are diagnostic, but one does not need EPS to make the diagnosis (SVT and characteristic sinus ECG findings seem to be enough). Thus, the ECG features of WPS are:

Ideally, this sort of ECG should come with a history of syncopal episodes.

What could go wrong:

Antiarrhythmic choice for acute management of SVT in WPW

Why is this even a thing? Consider: WPW is a preexcitation syndrome where an accessory conduction pathway bypasses the AV node and directly depolarises a little patch of the ventricle. Fortunately, the AV node has the advantage of being connected to the His bundle, which rapidly conducts the action potential to all four corners of the heart.  The accessory pathway is therefore unable to do any real harm because the tissue depolarised by the accessory pathway is soon surrounded on all sides by recently depolarised ventricular muscle, and the refractory periods of those cells limit the propagation of this rebel action potential.

In orthodromic SVT, the action potential enters the AV node, propagates down the bundle of His, depolarises the ventricles, reenters the atria via the accessory pathway, and stimulates the AV node again. As in any normal SVT, this is something that should respond well to AV nodal blockers. If you block the AV node, the reentry of the action potential will only stimulate the atria and then dissipate harmlessly against the blocked node, and propagate no further. That ends the cycle, as there will be no ventricular action potential to reenter and stimulate the atria, which means that the next pulse should be a good honest sinus beat. On the basis of this, the UpToDate boffins recommend standard anti-SVT pharmacotherapy:

"The approach to patients with orthodromic AVRT is similar to patients with other types of paroxysmal supraventricular tachycardia... AV nodal blocking agent (ie, adenosine, verapamil, beta blockers) should be instituted. We suggest intravenous adenosine rather than intravenous verapamil as the initial choice based on its efficacy and short half-life. "

So, consider what might happen if the AV node were blocked. The ventricle is now only depolarised by the accessory pathway, so the QRS will be weird and wide, but now that the AV node is blocked, theoretically the block should have the exact same effect as in orthodromic SVT, i.e. the cycle is broken and the SVT should be aborted.

However, the authorities are not convinced. UpToDate hold forth that:

"Even though retrograde AV node conduction may be a "weak link" during antidromic AVRT, intravenously administered AV node-specific blocking drugs such as adenosine, verapamil, and beta blockers should be avoided unless the tachycardia is definitely known to be antidromic AVRT.  ...If the diagnosis is not certain, the patient should be considered to have an undiagnosed wide QRS tachycardia"

Interpreting this literally, it would appear that they would also recommend AV blockers for antidromic SVT, just as they would for orthodromic SVT, just as long as you are absolutely sure that it is antidromic. Or orthodromic. In short, either version of SVT in WPW seem to be theoretically susceptible to the safe use of AV nodal blockers, but if the QRS complexes are broad, you should not assume that it is antidromic SVT, but rather consider the possibility that it is either AF with WPW or a proper ventricular tachycardia.

Which brings us to...

Atrial fibrillation in WPW is a hideous thing. The erratic atrial action potentials getting propagated down the accessory pathway are a source of bizarre broad QRS complexes which bounce crazily around the ventricle and create an electrical environment richly conducive to early afterdepolarisations. These are hopefully balanced by some normal narrow-complex action potentials propagating down the AV node, which should depolarise the ventricle in a more organised fashion, hopefully preventing any ventriculofibrillatory shenanigans by putting enough of the ventricle into an absolute refractory period. In the bloodshot light of the pre-dawn ICU shift, the ECG picture (particularly if the narrow complexes are outnumbered) may look like the broad-QRS appearance of an antidromic SVT.

Now, consider using an AV blocker in this scenario. The AV node no longer conducts any normal potentials, and ventricular activity is being driven solely by the total chaos of the fibrillating atria. The ventricular rate is no longer limited by the stabilising apperance of "properly" conducted beats, and the ventricle ends up stimulated by a cacophony of action potentials arriving at some rate between 300-600 per minute. The effect is illustrated by the image below, which was shamelessly stolen from Shah (2011) via  this excellent blog: 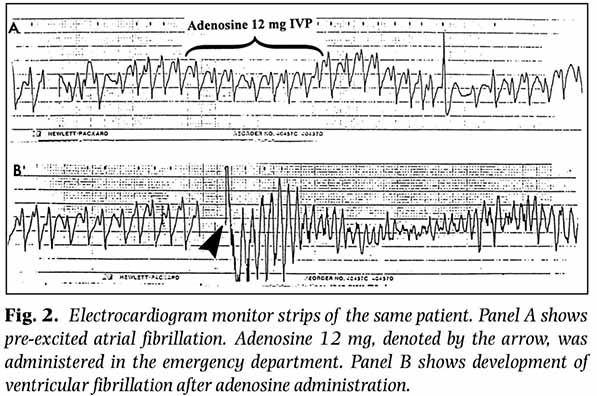 Note that adenosine is not required for this. WPW AF is perfectly capable of degenerating into VF all on its own, as demonstrated here in a rhythm strip from the MSD Manual:

Safe practice in SVT with WPW

So, in summary, what can we safely say about the management of acute SVT in WPW?

On this basis, the authorities tend to recommend the use of Class I or Class III agents instead of AV nodal blockers. The model answer to Question 3.1 from the first paper of 2009 lists procainamide and amiodarone as first-line agents, whereas digoxin and verapamil are contraindicated. Digoxin decreases the refractory period of the accessory pathway and verapimil tends to accelerate the ventricular response to AF by a similar mechanism. Since 2009, public opinion has also drifted away from amiodarone. As an acute infusion it is basically a beta-blocker with some AV nodal specificity. It is therefore the wrong drug for acute management of WPW SVT; or rather, it will probably be safe in the narrow-complex-obviously-orthodromic population, with the aforementioned caveats. In the long term, it becomes more useful, as its Class III and Class I effects begin to develop, slowing conduction down the accessory pathway.