Familiarity with an intra-aortic balloon pump design and function may seem like a fascinating area of discussion, particularly if one has never worked in a major cardiothoracic ICU and has never seen this beast. However, the value of such discussions for purposes of exam revision is in doubt. The trainee, confronted by an excess of esoteric information, may rightly raise the question, "do I need to know this?" In general, the answer would be "yes". It is not inconceivable that they, like the author had been, will find themselves standing in front of a closed curtain waiting to begin their hot case, hearing the rhythmic sounds of the balloon a couple of meters away. There is a vast diversity of practice in ICU and putting these things into people routinely has not yet deteriorated to a discredited level of wackiness like renal dose dopamine. Ergo, one may reasonably expect it to be a fixed feature of ICU exams for some years to come.

With this said, the trainee must be aware of the fact that at no stage in the historical CICM Part II papers has the college ever asked about the details which follow. Those who are short on time can safely ignore the contents of this chapter.

In short, this thing is a catheter with a helium-filled balloon on the end, threaded into one's aorta, rigged to fill and empty in sequence with the cardiac cycle. 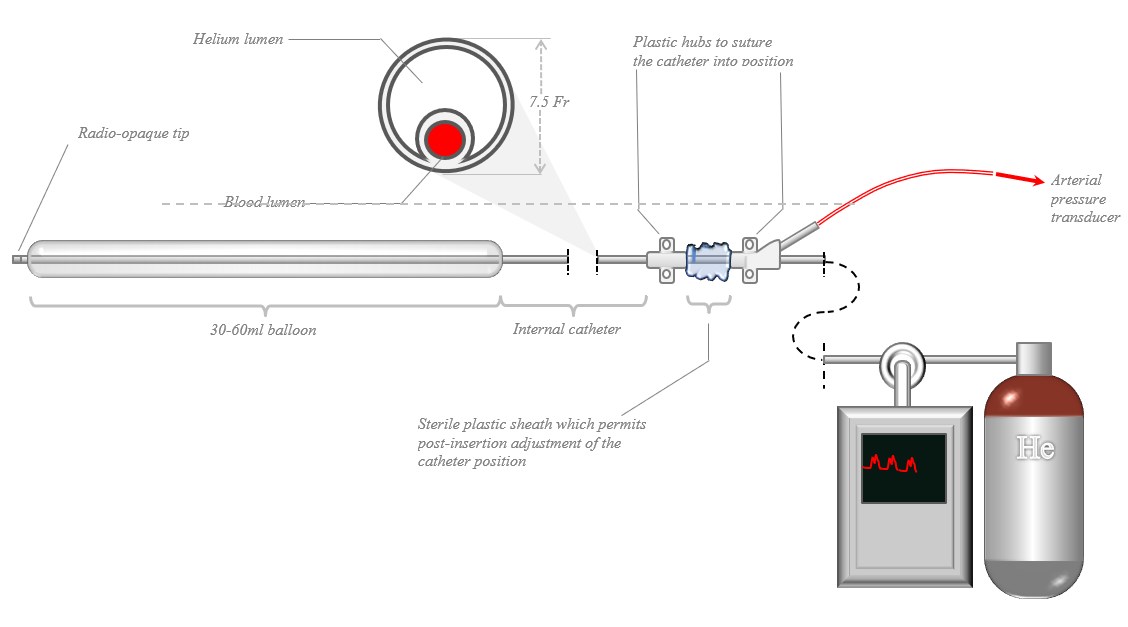 When fully inflated, the sausage-shaped balloon fills 80-90% of the thoracic aortic volume.

Yes, it's a very strange thing to have in your aorta. An no, it's not at all uncomfortable. Apart from the unpleasantness of having one's femoral artery punctured, most people don't find the experience particularly alarming. I have asked them; they can't feel the movements of the balloon. In any case, I am sure that any adverse components of their experience are drowned out by the appreciation of the fact that one is alive in spite of a massive coronary event.

The first balloons were made of latex, and filled with carbon dioxide. Moulopoulos and friends designed and tested the first prototype when it became clear that moving blood with an intra-aortic balloon was a more civilised approach than rapidly sucking blood out of the arterial circulation during systole, and re-injecting it during diastole. The term "counterpulsation" was coined during this early era to describe a pulsatile movement of arterial blood which was "counter" to the normal pulsatile flow, a reversal of the ordinary dynamic.

Insertion of the IABP is a relatively straightforward Seldinger process, detailed with lovely diagrams in the marketing propaganda of the manufacturers. The real trick is confirming that it is in the right position before you unscrub.

Anticoagulation for the IABP

So; we have shoved a sausage-shaped thrombogenic object into a large central vessel. The object pulses incessantly, and the blood flow around it is rapid and constant, which is somewhat protective against clot formation on the balloon surface. So do we need to have any anticoagulation? And if we do, then how much is enough?

The answer is not straightforward. For instance, in 2003 some brave investigators from Saudi Arabia published findings which suggest that there is no difference in thrombotic complications with an APTT 50-70, and a normal APTT. No mention is given to the antiplatelet agents used, but one assumes the patients who had PCI were treated according to international guidelines.

Similarly, in 2008 a group from Washington produced evidence to suggest that rather than heparinising everybody by default, a "selective" heparinisation should be pursued (meaning, presumably, that every case is assessed according to their risk, and each decision made according to individual merits). Though this is intelligent, it does nothing to help every individual practitioner, who are invited to make up their own mind with no guidelines to steer decisionmaking.

In short, the evidence is conflicting, and most centres tend to compromise by using a low-dose continuous heparin infusion, without APTT targets.

Insertion of the IABP: a manual by MAQUET

Cooper, Howard A., Elissa Thompson, and Julio A. Panza. "The role of heparin anticoagulation during intra-aortic balloon counterpulsation in the coronary care unit." Acute Cardiac Care 10.4 (2008): 214-220.