Deep hypothermic circulatory arrest is the delicate art of draining the patient into a bucket, cooling them down to 15-20ºC, and stopping their heart so the surgeon can operate on a bloodless aortic root. This topic has only appeared once, as Question 16 from the second paper of 2021. The specific elements asked in this SAQ were the rationale  indications and perioperative complications

The practice of DHCA has lots of permutations and there is no one specific definition, nor a specific boundary that separates "deep" from "not deep". Also, though the name seems to exclude techniques where some element of the circulation is preserved (eg. anterograde or retrograde cerebral perfusion ) even though they might still involve cooling the patient down to 18-22º C. A standard technique, described as "straight" DHCA, is summarised in an excellent article by Ziganshin et al (2014):

Rationale for hypothermia is cerebral protection. Well, organ protection, in general, which is the result of hypothermia. All sorts of famous graphs track the reduction in cerebral metabolic rate as the temperature drops, and all of them are usually some variation on this one below. It comes from Kirklin/Barratt-Boyes Cardiac Surgery (the authors' one is the 4th edition from 2012). 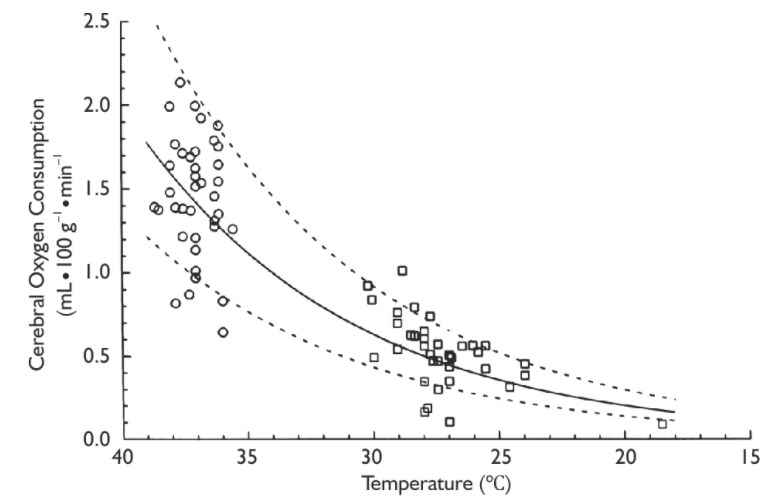 Nobody ever seems to comment on this, but the origin of these data points was actually a paper by Croughwell et al (1992). The authors were trying to create an equation that predicted the maximum duration of poor or absent flow at different temperatures. From this data set, it is apparent that at 18º C, cerebral metabolic rate decreases to something like 10-15% of the normal rate seen at 37º C. The basic theory underlying DHCA is that with hypothermia, there might be a safe duration of completely absent flow which might be well tolerated.

So, why do you need this protection against absent flow? Because the surgery requires for there to be no flow, for a rather sustained period of time.

Rationale for circulatory arrest is surgical access. The surgical approach to the replacement or repair of the aortic arch and aortic root requires that at some stage the aorta be incised and open to air. To have blood flowing through it at this stage would be fairly uncivilised- impractically bloody and embolism-prone. The alternative (to bypass the aortic root and somehow perfuse everything that needs to be perfused without stopping the circulation) is still possible, and some authors hold that this method is protective against some of the worst side effects of DHCA. At this stage there does not appear to be any major advantage of one method vs. the other, and defenders of "straight" DHCA point to its long and proven track record.

So, when might you need to do this to somebody? The following comprehensive list was stolen directly from Chapter 62 of Anaesthesiology Core Review:

And how long can you go, that low? The duration of hypothermic arrest is actually more controversial than the depth of hypothermia. You could theoretically reduce the temperature down to 0º C, as there really does not appear to be any technological barrier to this. However, even at extremely low temperatures, the metabolism of the brain does not completely cease, i.e. one can never get down to zero percent metabolism. Ergo, there is a finite time span that could be safely tolerated, and beyond which some level of brain injury would develop. Moreover, blood stasis tends to result in regional microvascular dysfunction which leads to decreased perfusion after the blood flow is restored again, and this is also something that seems to be time-related. As the result, it is generally believed that

DHCA here is conventionally defined, i.e. temperatures of 15-20º C. That is as low as you normally go, for routine midweek DHCA. Experimenters have naturally gone further, mainly in animals. Michenfelder & Milne (1992) cooled dogs down as low as 7º C, and found that the CMRO2 decreased even further, to something like 5% of normal (0.2ml/100g/min, down from 3.59). However, the drop from 18º C to 7º C does not appear justified. The EEG is already isoelectric by this point, and the extra 5% decrease in cerebral metabolism would not produce a marked increase in the safe duration of DHCA. But it certainly would increase the rewarming time, which is already extremely long. The result would be more complications, and more use of operating theatre resources, for no real gain.

Question 16 from the second paper of 2021 specifically asked the trainees to outline the adverse effects of DHCA that may be encountered in ICU, after the patient returns from the operating theatre. These are obviously going to a bit difficult to separate from the complications associated with cardiopulmonary bypass in general, or from the complications of the major aortic surgery. Did the patient develop cognitive dysfunction from the stasis of DHCA, or from microemboli of bypass, or from the cholesterol dislodged during aortic clamping, or from some unrecognised air emboli?

Anyway. Specific complications attributable to the overall technique of DHCA for aortic surgery are as follows:

Other complications may also be seen in association with DHCA, but not due to it. For example, tthe left recurrent laryngeal nerve travels close to the arch of the aorta, and can be injured as collateral damage. According to Hlaing et al (2016), some degree of vocal cord paralysis occurs in 5% to 21.9% of thoracic aortic surgery patients. On the other hand it could actually improve: the aortic arch aneurysm may have been causing a recurrent laryngeal nerve neuropraxia. You would inevitably see this in patients following DHCA, but it is not one of the effects of DHCA per se.

Croughwell, N., et al. "The effect of temperature on cerebral metabolism and blood flow in adults during cardiopulmonary bypass." The Journal of Thoracic and Cardiovascular Surgery 103.3 (1992): 549-554.