Care for the patient with aortic dissection

Though aortic dissection is most commonly the domain of vascular surgeons and interventional radiologists, it does occasionally involve the arch of the aorta, and the management for both conditions involves the tight control of haemodynamic variables. In short, it seemed reasonable to put this chapter into the cardiothoracic section. The most useful parts offered below are the management of the Type A dissection back from a recent aortic root repair,  the conservative medical management of an uncontrolled Type B dissection, and the possible reasons one might resort to surgery in the latter.

Up until Question 13 from the second paper of 2021, this has not come up in the fellowship exam, except as a question regarding diagnostic modalities: Question 13 from the second paper of 2010. LITFL have an excellent summary of this topic, in succinct point form and complete with recent references. As the diagnostic steps have already been covered elsewhere, this section will focus on the potential complications and management strategies. The canonical source for this information would have to be the most recent iteration of the ACCF/AHA Guidelines for Diagnosis and Management of Patients With Thoracic Aortic Disease.

The first classification of aortic dissections was fashioned by Michael DeBakey and his colleagues. They had the distinction of being the first to successfully perform a surgical repair in 1955, using a lateral thoracotomy approach. Some excellent pencil art accompanied this paper: 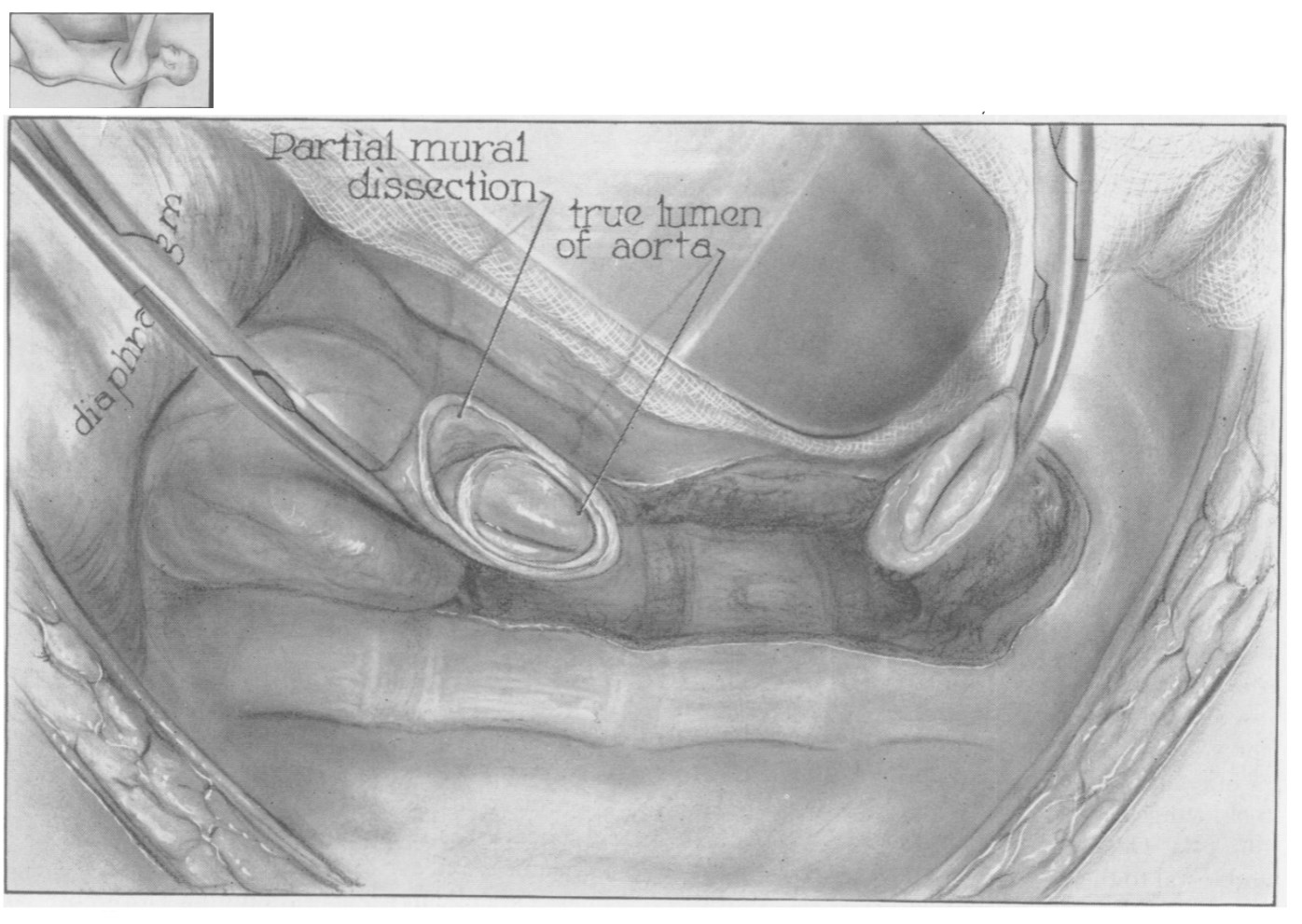 After ten years of experience, this group (DeBakey et al, 1965) classified "dissecting aneurysms of the aorta" into three major subtypes:

This classification was mainly directed by the difference of the surgical approach used by these pioneers. Type 1 was recognised as having "a tendency ... to progress rapidly toward a fatal termination", and urgent surgery was recommended. The authors also described their (at that time, novel) technique of transecting the aorta on bypass and repairing the dissection by approximating the inner and outer walls. Type 2 required the replacement of the entire ascending aorta with a graft, and Type 3 required the replacement of only the descending segment.

The main criticism of this classification was that the distal extent of the dissection (i.e. whether it extends more distally than the left subclavian) appeared to have little effect on the mortality, whereas the proximal extent was very important. People with dissections of the ascending aorta were sicker, and tended to die. People with predominantly descending aortic involvement tended to have less invasive surgery, and largely survived (as both DeBakey Type 1 and Type 2 responded to basically the same sort of surgical approach, and required a median sternotomy to repair, whereas Type 3 could be done with a thoracotomy). On the basis of this, Daily et al (1970) came up with the Stanford classification (Stanford not because of a co-author named Stanford but named after Stanford University Hospital where the co-authors worked). They simplified the dissections into either Type A (involving the ascending aorta) and Type B (the rest). The point of separation was designated as the left subclavian artery: any dissection distal to this point is Type B. On this, there is a difference of opinion between radiologists and surgeons; according to Lempel et al (2014),

Other classification systems have been attempted.  Miller et al (1979) further subdivided Stanford A and B into "acute" and "chronic", an acute dissection being one that has been around for less than 2 weeks. Aortic dissection, intramural haematoma and penetrating atherosclerotic ulcer all form a spectrum of related disorders grouped as "acute aortic syndromes", and Svennson et al (1999) tried to represent these in a separate classification system.

Stanford Type B dissection can be further subclassified as "complicated" or "uncomplicated". This is something of a subjective assessment, as the thing that separates one from the other is the presence of end-organ complications. Moulakakis et al (2014) describes a "malperfusion syndrome involving visceral, renal, or extremity ischemia, rupture or impending rupture, uncontrolled hypertension, persistent abdominal or chest pain, or findings of rapid expansion on computed tomography (CT) imaging". The main reason for this additional classification system is to define the role of surgical management. Uncomplicated dissections can be managed with good blood pressure control, whereas complicated dissections usually require some sort of repair, usually endovascular.

To paraphrase Table 9 from the ACCF/AHA guidelines:

Chest pain is basically standard. The classical textbook description of the abrupt onset chest pain which is described as tearing and which radiates to the back and shoulder blades is actually strongly represented among emergency presentations with aortic dissections, and only about 10% are painless (Ayrik et al, 2006). From an excellent overview by Bossone et al (2018), the following list of features was assembled:

It would surprise nobody to learn that the sudden structural failure of the main blood supply channel in your body could have some major consequences. A few:

The medical therapy for aortic dissection is probably of greatest interest to the intensivist, as we tend to be caring for the patient before they go for surgery.  And when surgery is delayed, deferred, or where a conservative  course of management is embarked upon, the medical therapy becomes all-important.

The most critical issue is to prevent the propagation of the dissection. The intima is hydrodissected into by two main properties of the flowing blood: the force imparted on the wall of the aorta by each ventricular contraction, and by the pressure of the blood, which is actually exerted mainly in diastole. Of these, the former seems to be more important for dissections, at least on the basis of mathematical modelling (Attinger, 1964). This is the force exerted by the left ventricular pulse, which is a product of mass and acceleration. Specifically, the term impulse is usually seen in the literature, which is a term borrowed from physics by Rushmer (1964), and which describes the product of force and time. The mass of the blood is not something you can do much about, but acceleration and time are definitely amenable to medical control. These are defined by the contractility of the left ventricle, often expressed in the literature as dP/dT.

From this, it follows that, to decrease the rate of propagation of a dissection flap, we should aim to decrease dP/dT. This was recognised very early by Wheat et al (1965), who described the rationale and practical use of contractility-targeting antihypertensive therapy in acute aortic dissection. Apart from purely theoretical physiological observations, the support for their thesis came from a comically random source. Apparently, some weird selective breeding practices in in 1950s America applied to commercially farmed turkeys ultimately selected a population of incredibly hypertensive birds, to the point where a dominant mode of death for them was aortic dissection, often before the poor gobbler reached a marketable weight. As soon as reserpine became available, farmers began to administer it to these flocks in subclinical doses (parts per million), with excellent effect. From this, Wheat and colleagues derived their rationale for using reserpine and trimethapham on humans.

Now, reserpine is an indole alkaloid which acts as a monoamine reuptake inhibitor by irreversibly blocking the VMAT-2 transport protein, leading to depletion of all monoamines (yes catecholamines, but also dopamine and serotonin, to the point where it could have made a decent antipsychotic). Trimethapham is a ganglionic blocker. Thankfully, these days we do not need to resort to these toxic substances.

What endpoints do you aim for? We have no satisfactory method of continuously monitoring dP/dT, but we do have invasive arterial pressure monitors, which make reasonable surrogates. Oh's Manual recommends a systolic BP target of 100-110 mmHg, or a MAP of 55-65 mmHg (pp. 1033), which fits well with other recommendations in the literature (100-120 mmHg seems to be the range most review articles tend to fall into). However, from end-stage CICM trainees, some additional level of sophistication is probably expected, and the monodimensional pursuit of blood pressure targets is probably not going to be enough for exam success. Thus:

The choice of drugs to achieve these goals is relatively broad. Wealthy American guidelines recommend esmolol, which is basically liquid money. A cheaper alternative may be IV labetalol. The added α-antagonist effect from this drug seems to play some beneficialrole. The excellent management guidelines table from Tran & Khoynezhad (2009) recommends a 15mg bolus, followed by a 5mg/hr infusion. Esmolol or diltiazem can then be used to control any additional tachycardia; sodium nitroprusside or clevidipine can help with any refractory hypertension once the rate is well-controlled.

Some additional elements of care can be suggested, which all serve the main purpose, that being improvement of blood pressure control:

Most authors (eg. Goldfinger et al, 2014), when writing a review of aortic dissection, will mention the figure of 1% per hour. That is the rate at which the risk of death increases for a Type A aortic dissection waiting for surgery, and is supposed to illustrate the dangers of delaying definitive repair. Everybody quotes those numbers but nobody seems to ever mention where they came from. It appears that this 1%/hr figure comes from the IRAD database, which is an international registry of acute aortic dissection. On average, it appears that these patients only wait about 4 hours before getting into theatre. The audit of IRAD data by  Evangelista et al (2018) actually contains a lot of very valuable insights; for example, only 86% of patients are managed surgically, and the mortality for nonoperative management, though high (56%), is not 100%.

In short, conservative management is a valid option, but it's not a very good option. It's really reserved for the situation where surgery is absolutely contraindicated. For example, the patient has had a large ischaemic stroke, and will not tolerate the 30,000 units of heparin required for bypass. Or they are frail and elderly, and it seems a shame to subject them to sternotomy and bypass. Whatever the reason, the mortality from this approach seem to double whatever the mortality would have been from a surgical approach.

Surgical management of Type A dissection is a variation on the theme of aortic root replacement and repair. To discuss it in detail would extend the author into an area where he has neither expertise more interest, and for the CICM trainee, it will suffice to say that the surgical approach is individualised, and some people will end up with more Dacron inside them than others. Tirone et al (1999) is dated, but an otherwise solid overview of the techniques. The outcomes are spectacular. According to Yang et al (2018), in-hospital mortality can be as low as 8%.

Uncomplicated Type B: the vast majority of these can be managed non-operatively.  Estrera et al (2006) reported a mortality of 10% for this approach, which the authors had described as an "acceptable" outcome. However, a fair proportion of these "uncomplicated " Type B patients go on to develop late complications, like aneurysmal degeneration. These are entirely "uncomplicated", i.e they have no organ damage, but they do have a large false lumen, or a large aorta in general (more than 4cm). They are at greater risk of complications in the long term, and might benefit from endovascular repair, albeit with a delay.  The optimal window seems to be around 2 weeks to 3 months from the original dissection - too early, and the risk of complications from the TEVAR is too great (Tadros et al, 2019).

Complicated Type B usually need early TEVAR. The intervention is usually endovascular. Open repair is hideous, and most vascular surgeons would do whatever they can to avoid these. For Harky et al (2019), TEVAR had a 1-year mortality of around 7.4% as compared to  18.6% for open repair.

In order for a Type B dissection to be described as "complicated", the following criteria need to be present:

This list is from Moulakakis et al (2014), but it resembles what is seen in UpToDate. One could also add patients who are entirely "uncomplicated", but who have a large false lumen, or a large aorta in general (more than 4cm). They are at greater risk of complications in the long term, and might also benefoit

Hiratzka, Loren F., et al. "2010 ACCF/AHA/AATS/ACR/ASA/SCA/SCAI/SIR/STS/SVM guidelines for the diagnosis and management of patients with thoracic aortic disease." Journal of the American College of Cardiology 55.14 (2010): e27-e129.