This section deals with the act of forcibly taking control of somebody's cardiac conduction system.

For a detailed review of this topic, I direct the gentle reader to the Operation manual for the 5388 Medtronic Pulse Generator, as well as to this article on pulse generator engineering. Additionally, I would like to point a grateful finger at the Lancashire and South Cumbria Cardiac Physiologist Training Manual.

The selection of a mode of pacing is a complex art, and is detailed in the HRS/ACCF expert consensus statement on pacemaker device and mode selection.

The meaning of pacing mode codes

There is something called the NBG code. This is a lettered code which describes the basic function of pacing devices, as defined by the British Pacing and Electrophysiology Group (BPEC) and the North American Society for Pacing and Electrophysiology (NASPE, now known as Heart Rhythm Society). One can read the entire document here. However, this is not essential. There are only 3 letter positions relevant to the pragmatic intensivist.

That is correct, one could have a pacemaker switched to OOO mode, which is essentially turned off.

The D mode (dual chamber pacing) is obviously not available if both chambers don't have a lead in them.

Yes, with the lead in only one chamber, you only have a choice of AAI or AOO if its in the atrium or VOO or VVI if its in the ventricle. Triggered modes such as AAT and VVT are also available.

Single chamber atrial pacing is contraindicated in the presence of AV conduction disorders. Sure, the atrium might do its job, but the ventricle will not -and your ventricular rate will still be a slow "native" ventricular rhythm.

Worse yet, if you pace the atrium in the presence of an AV conduction failure, the left atrium will contract against a closed mitral valve, sending a pulse of blood back into the central venous circulation.

Atrial pacing in general doesn't tend to work in the presence of atrial fibrillation, particularly if this is chronic. A huge dilated atrium with useless conduction fibers will have no better luck coordinating its contractions with the pacemaker than it did with the sinoatrial node.

Asynchronous atrial pacing mode is usually the programmed response of an AAI pacemaker to the application of a magnet. This is never a permanent mode. In general, it is said that asynchronous pacing is contraindicated in the presence of intrinsic cardiac rhythms.

The above diagram illustrates AOO pacing with a sufficiently rapid rate, and 1:1 capture.

Essentially, this mode takes advantage of an intact AV node and other conducting pathways.

The SA node will probably also try to fire, but with a sufficiently rapid atrial rate the SA node's orders will fall upon the deaf ears of an atrium in its refractory period.

This mode is totally asynchronous. If the rate is not high enough, you will have an underlying rhythm competing with the pacemaker.

In AAI the atrium is sensed as well as paced. There is no reaction if the atrium fires normally- the pacemaker listens for normal atrial activity, and does not interfere with it.

However, if the atrial activity is occurring at a rate slower than the set pacemaker rate, the pacemaker will step in and fire.

Again, this mode is relying on normal AV conduction. In a person with a normal AV node and reasonably normal atrium, the AAI pacemaker will guarantee a certain rate.

This weird pacing mode will only pace whenever the atrium contracts. This seems counter intuitive; the atrium is clearly producing some valid electrical signals- why would you want to "pace along"?

Well. This mode, as I have discovered from A Practical Guide to Cardiac Pacing by Moses and Mullin, is of purely historical interest.

The pacing spikes in properly sensing AAT are above every P wave. This, in the distant past, was useful. The cardiac physiologist would program the pacemaker to pace in AAT to check its sensitivity - to see whether all the atrial activity was being sensed. If half the P waves did not merit a pacing spike, clearly the pacemaker was not sensitive enough. Conversely, an oversensitive pacemaker would mistake all sorts of noise for an atrial contraction, and pacing spikes would appear all over the place.

These days, the equipment and methods are sufficiently advanced that this mode has become a museum artifact. For most people, it is completely useless to sense and then pace the same chamber.

These are pacing modes available to the man who stuck the lead into the right ventricle.

This is your only choice if the AV node is screwed, or if you have a useless fibrillating atrium.

After the right ventricle has contracted, with some delay the wave of depolarisation reaches the left ventricle, which then contracts. Around the same time, the atria receive a retrograde wave of depolarisation. Thus, the left ventricle and both the atria contract simultaneously. This, patently, is useless. The left atrial contraction meets a closed mitral valve, and the stroke volume of the left atrium is instead launched back into the pulmonary venous circulation. You can lose a lot of cardiac output that way.

For this reason, ventricular pacing (in the outpatient setting) is limited to people whom you don't expect to do very much, in terms of daily activities. In the ICU, we resort to this as a means of ensuring ventricular contraction when the AV node or the atria have for some reason failed.

Again, this is a pacing mode into which the VVI pacemakers will revert by default when confronted with a magnet.

This doesn't look too bad, but remember that the VOO pacemaker is totally unconcerned about when it fires. If it happens to fire during the "vulnerable period", it may produce an R wave on top of a T wave (the R - on - T phenomenon) which will then give rise to a polymorphic VT or VF. This risk of R on T is great, and well-documented. With atrial pacing, this is less of an issue than with ventricular pacing.

The ventricle is sensed, and if it produces a QRS, the pacemaker sits quietly and waits.

The VVI pacemaker will only fire if there has been no ventricular electrical activity within the interval specified by its set rate.

Again, this is a pacing mode of purely historical interest.

The pacemaker fires only when it senses a normal QRS, but because a normal QRS has already triggered a ventricular contraction, the whole ventricle is in its refractory period, and thus the pacemaker impulse has no effect.

Pacing both chambers is a very good idea. There are several benefits:

A comparison of dual-chamber vs ventricle-only pacing is available from Cochrane. Their analysis has led them to conclude that dual-chamber modes are better for everybody. Though some of the trials demonstrated no difference, or equivocal benefit, the fact remains that no trial so far has demonstrated a superiority of single-chamber ventricular pacing.

This is a mode which suits people with a broken AV node. For instance, if you have complete heart block and a normal atrial rate, a VAT pacemaker will sense the atrium and pace the ventricle in response.

In this fashion, the VAT pacemakers creates a large externalised extension of the normal atrioventricular circuitry. It acts as the AV node, conducting signals between the atria and the ventricles. However, it does not use the bundle of His, and there are disadvantages in this.

The disadvantages of ventricular pacing remain prominent. The right and left ventricles depolarise out of sync, resulting in a slightly disorganised pattern of contraction. However, the native atrial contraction is preserved, and thus one avoids pacemaker syndrome.

This mode is generally though to be the hemodynamic superior. It is in essence a combination of four modes. In the event of normal atrial and ventricular activity, the pacemaker lies dormant. If one of the chambers forgets to depolarise, the pacemaker will "remind" it gently with a mild electrical shock. If both the chambers are refusing to cooperate, the pacemaker will patiently zap the atrium, then the ventricle, with a pre-determined time gap in between (roughly the duration of a normal P-R interval) 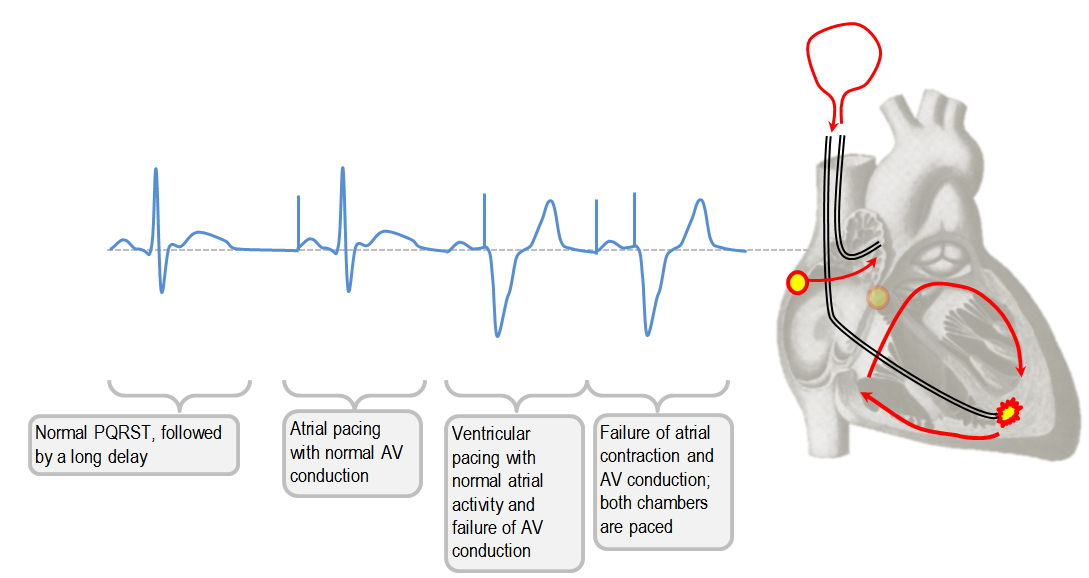 Lets put aside the versatility of this mode for a second. Sure, it will pace well no matter what the patient's conduction system is doing, but this is not all. In the decrepit ICU population, with poor quality myocardia, there is a significant hemodynamic benefit to having the atria and ventricles contract in synchrony.

There is a good image of this at ECGGuru.com. Overdrive pacing is used for slow(ish) VT; the idea is to use a rapid rate to put much of the ventricle into a refractory period, thus terminating the VT, and then to take over the rate by pacing regularly and slowly.

This table is replicated from the alternative to the official college answer for Question 20 (an SAQ from the first CICM fellowship paper of 2007).