A brief guide to troubleshooting the pacemaker circuit

This topic makes frequent appearances in the past papers. All the pacemaker questions ended up in the Cardiothoracic ICU section, by an arbitrary decision of the site author.

Failure to capture: pacing spikes do not produce QRS complexes

Undersensing: pacemaker paces asynchronously in spite of the presence of obvious P waves

Oversensing: failure to pace in spite of obvious bradycardia

Cross-talk: failure of DDD pacing; atrial pacing spike is mistaken for a QRS by the ventricular lead

Care for the epicardial wires:

How to find the pacing threshold ("Capture threshold")

In order to find the minimum current required for capture, one can perform a simple manoeuvre:

A systematic approach to troubleshooting the temporary pacemaker

Start with the box.

Ok, so the hardware is intact. If there is output failure, its not because of the leads or the battery. Move on to the software.

This will not take care of oversensing as a cause of pacing failure, but it should defeat undersensing.

Crank the output to double the capture threshold.

What happens when you put the magnet on?

Generally speaking, most pacemakers will respond to magnet exposure by becoming asynchronous, i.e. they will start pacing without sensing. AICDs will stop defibrillating. This is good to know if you are palliating a patient with an implanted device, and you don't want to have the defib firing randomly in the last few minutes of their life.

Of course, there is no standard among the manufacturers regarding what precisely should happen when the magnet is applied. Medtronic and Boston Scientific models will pace asynchronously; St Jude will cycle through some pre-programmed protocol which typically involves recording and storing an ECG, and Biotronic devices will do something completely random, depending on model and battery life. A good article about these idosyncratic behaviours is available on Medscape.

No output means no output. Somehow, the electrodes are dead- no current is flowing though them. This doesnt present you with any sort of characteristic rhythm to give you a clue. The pacemaker simply fails to work. This might be because there is something wrong with the battery or the leads, or it might be because the pacemaker is oversensing every little twitch of the surrounding muscles (though this would usually be a unipolar problem).

Lets say you have excluded oversensing by fiddling with the sensor threshold, or (less elegantly) by changing to an asynchronous mode.

Now, try increasing the power to maximum (20mA in most atrial modes, 25mA for the ventricles).

If at maximum power the pacemaker still cannot capture, you could try one last thing - attaching the pacing wires directly to the pacemaker, without the lead. This is usually not possible with the transvenous models. In epicardial pacing, this excludes the lead as a source of pacing failure.

This is easily diagnosed. It is the dissociation between pacing spikes and QRS complexes (or P waves, for that matter).

Failure to capture means either you are using too little current, or your lead is in a stupid position (i.e. not anywhere near the ventricular wall). The latter you can do nothing about.
The former remains within your control.

Thus, the first step is to increase the pacemaker output.

If you are already using the maximum amount of current, there are several possibilities:

This is a situation where the pacemaker, instructed to inhibit itself whenever a viable P or QRS comes along, instead paces irresponsibly, ignoring normal cardiac activity. This pacemaker is in essence asynchronous.

The solution to this problem is to reduce the sensor threshold until something happens. If nothing happens, there is something cardinally wrong with the electrode. It may not be possible to rescue this situation with polarity reversal or conversion to unipolar pacing, but one should still try.

This is a situation where something other than genuine myocardial electrical activity is mistaken for an inhibitory signal. The pacemaker in AAI VVI or DDD mode will dutifully switch off, while it should in fact be pacing.

This typically looks like a bradycardia. No pacing spikes are visible (or, there are too few of them).

One sometimes sees this in awake patients; when they are exercising their chest muscles (eg. trying to sit up in bed) the pacemaker is eerily silent, suggesting that skeletal muscle contraction is being interpreted as an inhibitory signal.

Alternatively, these potentials can be misintepreted as triggers for pulses by a VAT or DDD pacemaker. The result is a pacing spike each time your muscles twitch. This results in a horrendous sensor-induced tachycardia.

This problem, thankfully, is easily solved. One can increase the sensitivity of the pulse generator; or one can simply switch it to an asynchronous mode.

This is a phenomenon of dual-chamber DDD pacing.

This is all fine and good if you have intact AV conduction, but - lets face it - you have dual chamber pacing wires, so you probably have some sort of serious problem with your AV conduction. In this case, you will have no ventricular activity and crosstalk will probably kill you rather quickly.

At the same time, one can reduce the output current of the atrial wire, to make the pacing spike less obvious, and thus less likely to trigger the ventriular sensing.

These days, dual chamber pulse generators have a default "blanking period" which disables sensing in the ventricular lead precisely at the moment of atrial pacing.

Thus, in a modern box, the other possibility is that this is occurring because the ventricular pacing wire has migrated into the atrium.

This is in some ways the reciprocal of crosstalk. In DDD mode, the atrial pacing wire would intepret the ventricular pacing spike as an atrial depolarisation, and trigger another ventricular impulse, and so on, and so on. LITFL have an excellent example on their pacemaker malfunction page, which is reproduced here with neither their  permission, nor shame nor guilt: 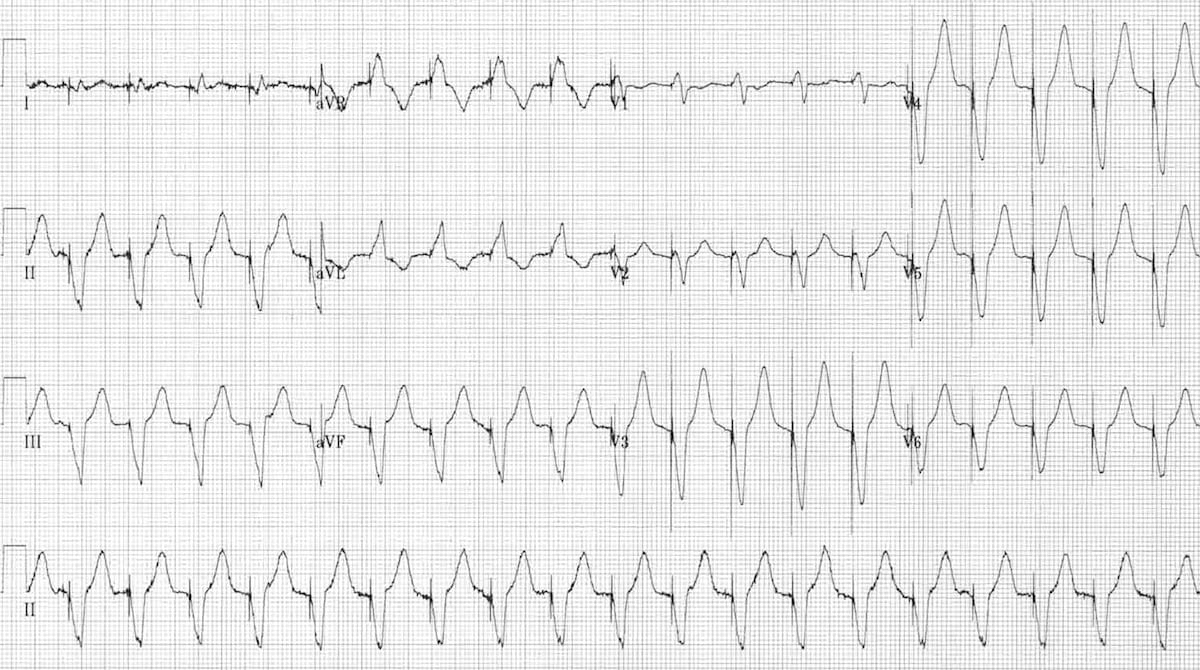 Alternatively, the retrograde conduction of ventricular depolarisation could fool the atrial lead, presenting itself as native atrial activity. The atrial lead would dutifully discharge the ventricular pulse, and this would also be conducted in a retrograde fashion, and so on and so forth.

Both examples would have no appreciable p-waves, looking like a broad-complex SVT. The tachycardia would be at the maximal rate allowed by the pacemaker.

Again, this is a failure of sensing. One can easily remedy this by changing to an asynchronous mode.