This is a summary of the physiological responses to the total or near-total absence of nutrition.

The physiological adaptation to starvation has been asked about in Question 27 from the second paper of 2013. Specifically, the college wanted to know about the metabolic changes of starvation and the stress response.

Composition and quantity of nutrients stored in the human body

George F Cahill is the guru of food deprivation physiology. His 1970 article "Starvation in Man" remains a masterpiece of scientific writing. Therein one may find a table entitled "Fuel Composition Of Normal Man" which I have uselessly interpreted into another weird cylinder diagram.
Whatever the value of that may be.

Anyway, each of us has about 20-25g of circulating fuel (of which the majority is glucose), worth about 113 calories. If we take this Homo vulgaris to be a 20 year old specimen measuring 70kg and 170cm, we can calculate that at their basal metabolic rate of 1800kcal/day they go through one blood volume worth of calories every 90 minutes. Thus, the circulating nutrient volume is constantly being consumed and replenished.

Then, we have a rapidly available glycogen storehouse, of which two thirds resides in the muscle. There is a total 900kcal of this stuff, and it is also constantly being consumed and replenished. It is replenished after meals (when insulin drives glucose into cells and promotes glyconeogenesis) and it is consumed between meals (when glucagon activated glycogenolysis, releasing glucose out of cells).

Glycogen is a poor means of storing energy. It is a starch-like branching molecule, has a low calorie density, only about 4 kcal per gram. Cahill reminds us that this density is actually measured in dried glycogen - in reality, 2g of water is stored together with each 1g of glycogen (in order to maintain intracellular isotonicity) and this dilutes its energy density even further.

Fat, on the other hand, is stored in blobs which are essentially free of water. It is a much more efficient energy storage system. And the vast majority of the fat in the body is available as a metabolic fuel, if push comes to shove. Those blobs are cushioning, they serve a purely cosmetic role and if you need to burn them to survive, so be it- they will not be missed. Not only that, but fat has a far higher energy density - something like 9.4 kcal per gram.

Protein does not come in a fuel storage form. It is structurally important; all of your protein has some function, and to burn it as fuel would be a gesture of desperation. An organism which is consuming its own protein is truly struggling. That said, if your organism is struggling it has some 6kg or so of protein to get through before it dies.

Metabolic adaptation to a brief period of fasting

The main change from the normal pattern is the refusal of the myocardium and skeletal muscle to use glucose. Instead, they switch over exclusively to free fatty acid and ketone metabolism.

The glycogen reserves in humans never get completely depleted. There is at all times a hepatic reserve, waiting to mobilise and rescue the organism from some sort of horrible situation.

The diagram below is again a paraphrase of Cahill; the mass of nutrients given in it is the amount consumed in a 24 hour period. 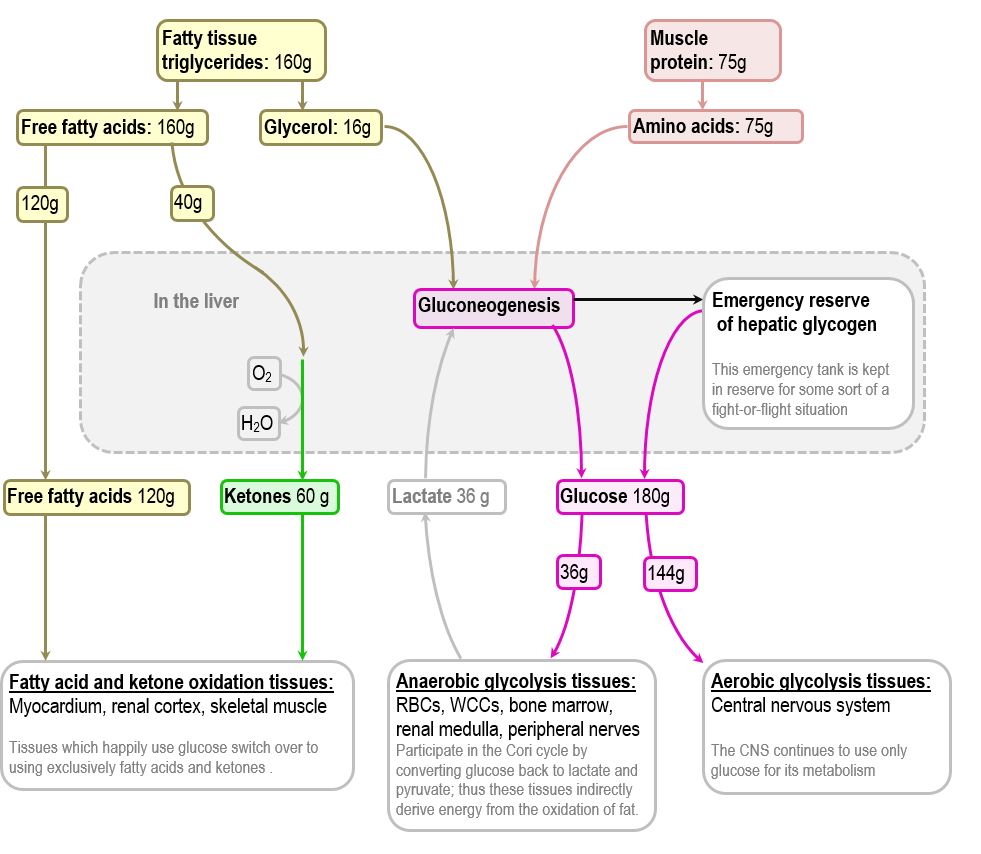 Hormones responsible for the metabolic adaptation to brief fasting The major hormonal player in this adaptation is insulin, or rather, its lack. With the absence of regular glucose peaks (given the lack of eating) insulin levels drop. Insulin is the primary inhibitor of lipolysis, because the tyrosine kinase activity of its intracellular domain activates a phosphodiesterase, which keeps intracellular cAMP levels low. As insulin levels drop, the background sympathetic activity becomes unopposed, and the hormone sensitive lipase begins to dismantle their triglyceride stores, releasing delicious fatty acids into the bloodstream.
(Yes, there are three lipases in the pathway, because there are three fatty acid molecules attached to the glycerol. Only the first lipase is hormone-sensitive.)

So, noradrenaline increases the rate of lipolysis (by affecting the bored and lonely beta-3 receptor, which doesn't seem to have much of a function outside of lipolysis), and insulin decreases the rate of lipolysis. Which effect is dominant in ICU patients who are frequently marinading in infusions of both noradrenaline and insulin? Hard to say. The catecholamine excess associated with critical illness definitely causes lipolysis, even in absence of exogenous catecholamines.

Proteolysis in fasting is not studied as well as lipolysis, but it is clear that an insulin deficit also activates proteolytic pathways (because the administration of small amounts of intravenous dextrose seems to inhibit proteolysis)

Which brings up an interesting question. Nobody ever just lies there and starves quietly for their first few days in the ICU. What happens to these patients?

They still starve.
But, if 150g (600kcal) or so of simple carbohydrate is delivered every day (which is 3 litres of 5% dextrose, or around 600ml of Jevity), the proteolytic pathway is switched off. Lipolysis continues, but the exogenous glucose results in enough insulin release to abort the ketogenesis.

In short, feeding your patient even a tiny amount of carbohydrate will prevent ketosis and protein catabolism.

Sneakily, one can achieve the same effect by administering insulin as a part of an insulin-dextrose infusion. At protocol rate (80ml/hr) one ends up giving only 1920ml of 5% dextrose in 24 hours, which is just short of 100g (or 400kCal); but the exogenous insulin switches off the ketogenesis and proteolysis anyway.

Proteolysis cannot continue at a rate of 75 grams per day. This would be insane, and all of the protein would be depleted very quickly.
Thus, with prolonged starvation, the rate of protein catabolism reduces. This can be seen from experiments, as a decreased rate of urinary nitrogen (urea) excretion. Because the rate if urea production is so low, the obligatory rate of urine production is also lower.

A fasting person requires much less fluid this way, which must have been an evolutionary advantage. in summary, there are 3 phases of fasting: Weight loss due to fasting With total acaloric fasting, a certain healthy 41 yr old member of a cloistered religious community lost 0.9kg per day for the first few days of the fast, a rate which decreased to a stable 0.3kg/day towards the third week of fasting.

This rate seems consistent among various experimentally fasted subjects. Most seem to lose about 20% of their body weight during a 30 day fast.

The total amount of weight lost in the course of a fasting experiment is not representative of the critical care population. Our patients are infrequently monastic ovolactovegetarians with a normal BMI. Additionally, in a critical care setting the metabo 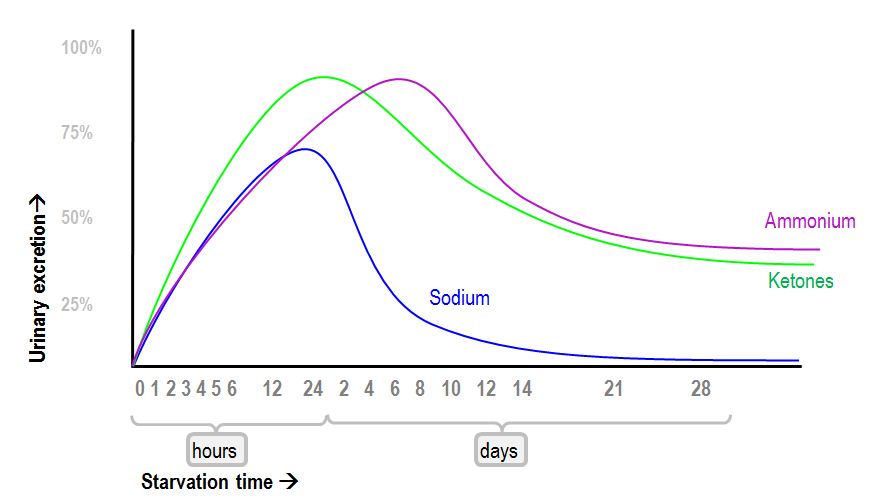 lic demands are greatly increased. One can only estimate that the ICU patient loses weight at a much faster rate, especially if burns, trauma or sepsis are involved.

The 41 yr old monk lost 0.9kg per day for the first few days of the fast. This initial rapid weight loss is not totally due to the loss of dry nutrient mass. Think about it: the burning of 0.9kg of fat protein and carbohydrate in one day day would yield 3150 kcal in total, which is insane (given that a basal metabolic rate we agreed on is 1800 kcal/day).

The extra weight loss is actually due to diuresis and natriuresis. The urinary loss of the sodium cation is obligatory loss. As ketone anions are lost in the urine, they require a cation to accompany them; initially this is sodium, and later in the fast it is ammonium.

The best source of information regarding the body content of fuel and the metabolic adaptation to starvation can be found in Dr Cahill's article from 1970.

My main reference for the electrolyte disturbances and other physiological changes with starvation come from the Kerndt experiments.

Finally, I have managed to find a monograph of the original 1915 study by F G Benedict, performed upon Mr L., a Maltese gentleman with an interest in prolonged fasting. The entire monograph is a bizarre and beautiful read, a day-by-day chronicle of voluntary starvation, documented with amazing attention to every miniscule scatological detail. My hat is off to these early pioneers.