A Wheatstone bridge is an electrical circuit used to measure an unknown electrical resistance.  The electrical resistance in most medically relevant case is of a strain gauge, which is coupled to a measured parameter (eg. arterial or venous blood pressure). The coupling is usually via some sort of incompressible fluid-filled tubing. Typically, the circuit takes the shape of a cicular arrangement of resistors where the resistance of all but one is known. The remaining "unknown" resistor acts as the strain gauge. As pressure on the gauge changes, so does its resistance, and this causes a change in the current which flows though the Wheatstone bridge. The magnitude of this pressure can be inferred from the magnitude of the changes in current.

The Wheatstone Bridge pressure transducer in a little detail

Here is a nice picture from Wikipedia: 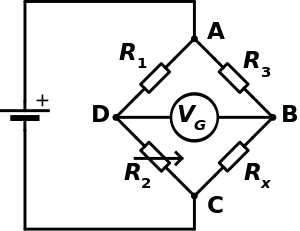 The resistance of all the resistors is known, except for Resistor X.

VG is a galvanometer which measures the current flowing between D and B.

Essentially, if the ratio of resistance in the R1/R2 limb is the same as the resistance of the R3/Rx limb, there should be no current flowing through that galvanometer.

Alternatively, you can calculate what the Rx resistance is using Kirchhoff's circuit laws, which is what ends up happening in the common hospital-grade blood pressure monitor.

For a casual acquaintance with electrical circuits, this Wikipedia entry is enough.

For the masochist, this FRCA study document will fill in all the blanks.