Historically, the arterial line waveform has appeared in the exam in several forms. The trainees have at one stage been expected to discuss broadly what sort of information can be derived from it (Question 30.2 from the second paper of 2013 and Question 11.2 from the first paper of 2021). In the Part One, Question 2 from the first paper of 2019 asked about the information which can be derived from arterial waveforms. Questions regarding the change of the waveform depending on its position in the vascular tree have also appeared (Question 11.1 from the first paper of 2010). More often, the college will produce an arterial waveform tracing with some abnormality (eg. AF with loss of atrial kick, or respiratory "swing" ) and then ask the trainee to identify the abnormality and give four causes.

This chapter is a brief summary of the relevant arterial line related material to aid revision for the Part II exam. However, the bulk of detailed notes on arterial line insertion and waveform interpretation is in the Part I revision resources, mainly because it seemed like a fundamental piece of basic ICU knowledge which belongs somewhere in the early part of training. A systolic pressure variation of over 10mmHg is thought to be significant.

An increase in respiratory pulse pressure variation could be due to any of the following:

Information from the Square Wave test

The square wave dynamic response test receives more attention elsewhere.    In one previous SAQ (Question 11.2 from the first paper of 2010) the candidates were presented with an underdamped square wave trace, which looked something like this: The candidates were then asked to comment on  "the fidelity of the arterial system". What did the college mean by this?

Influence of catheter position on the arterial waveform

The shape of the arterial waveform changes according to its position in relation to the aortic valve. The college has previously used this picture: 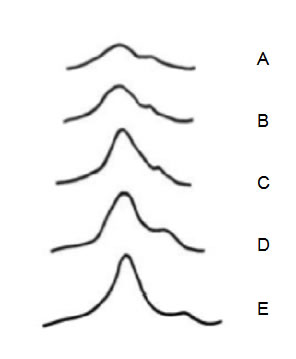 The candidates were then asked to "list the likely sites A-E". The college answer identified A as the central aortic measurement, B as proximal upper limb, and so forth in order of increasing distance. This phenomenon is discussed in greater detail somewhere in the Haemodynamic Monitoring section, probably in the chapter on "Normal arterial line waveforms".
In brief:

The further you get from the aorta,

The MAP doesn't change very much because, from the aorta to the radial artery, there is little change in the resistance to flow. MAP only really begins to change once you hit the arterioles; this is called distal systolic pulse amplification.

For those who like hardcore physics, this excellent resource will be an enormous source of amusement. It appears to be a free online textbook of anaesthesia. Nowhere else was this topic covered with a greater depth, or with a greater attention to mathematical detail.