The underwater seal drain is a favourite of the college, likely because it is a widely misunderstood device that is in routine use. In Question 24.2 from the second paper of 2012 they asked the trainees to label the diagram of one, and then to explain how it differs from a single-chamber system. This topic also came up previously in  Question 26.1 from the first paper of 2009. Again, in Question 24 from the second paper of 2018, the trainees were asked to draw all three bottle-based chest drain system setups and to argue about their advantages and disadvantages. In short, the ICU trainee should be prepared to enter into a detailed discussion of chest drain systems.

From the perspective of published peer-reviewed resources, you can't do much better than Kam et al (1993), which has clear diagrams and all the details required to answer Question 24 from the second paper of 2018.

The single bottle system is exactly that. It is a single bottle, open to air. The patient's chest tube is submerged under a level of water (usually about 2cm) which acts as a one-way valve. When the patient's pleural pressure exceeds the level of water (i.e. it is greater than 2cm H2O), the air in the tube will bubble out and escape into the atmosphere. When the patient takes a breath in, the negative intrapleural pressure will suck drain water up the tube, but no additional air can enter.

What are the advantages of the single bottle pleural drain?

This system obviously has a few problems:

In order to address some of the shortcomings of the single-bottle system, one may be tempted to add another bottle.

This system separates the fluid collection chamber from the water seal chamber. That way, there is still an underwater seal to prevent the re-entrainment of air, and pleural fluid can collect in the first chamber without affecting the depth of the underwater seal. 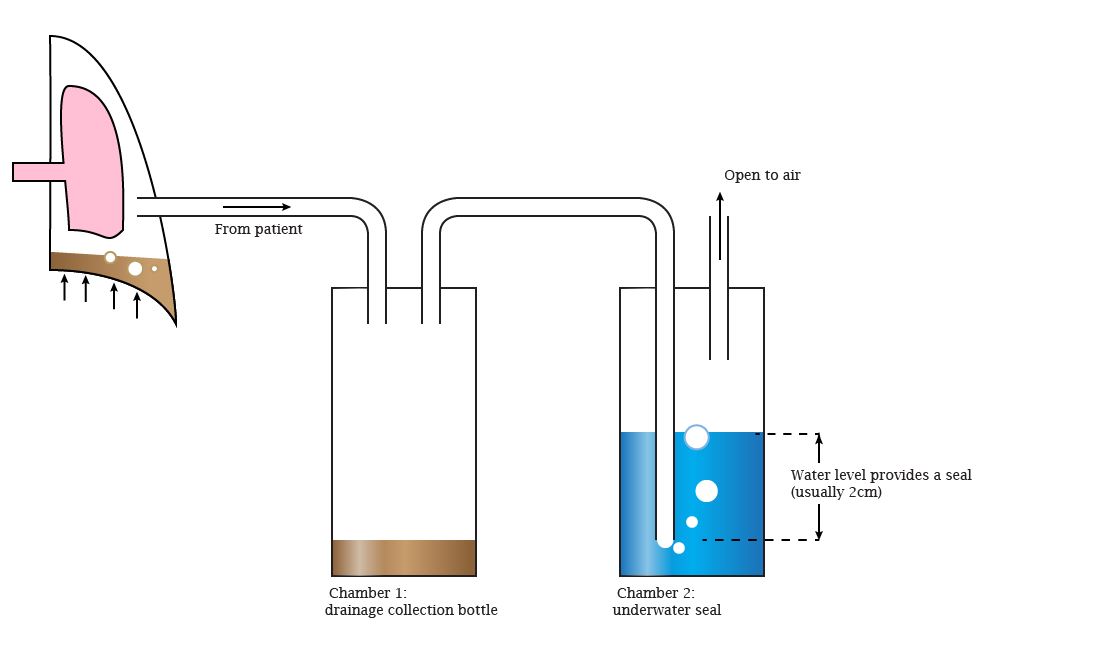 So, the advantages of this thing are:

There are of course disadvantages:

The latter point brings us to the next system, the classical three-chamber underwater seal drain.

This system is much like the two-bottle system, but with an added chamber to help regulate the suction pressure, i.e. it is specifically designed to be used with suction. It was apparently developed at the Massachusetts General Hospital in 1945.

Advantages of the three-chamber drain:

To address the latter point, and ignoring the previous point, one may add a fourth bottle for safety.

The major change in this system is the addition of another underwater seal, this time disconnected from the wall suction and vented to the atmosphere. The objective is to protect the patient from pneumothorax in the event of sudden suction failure. 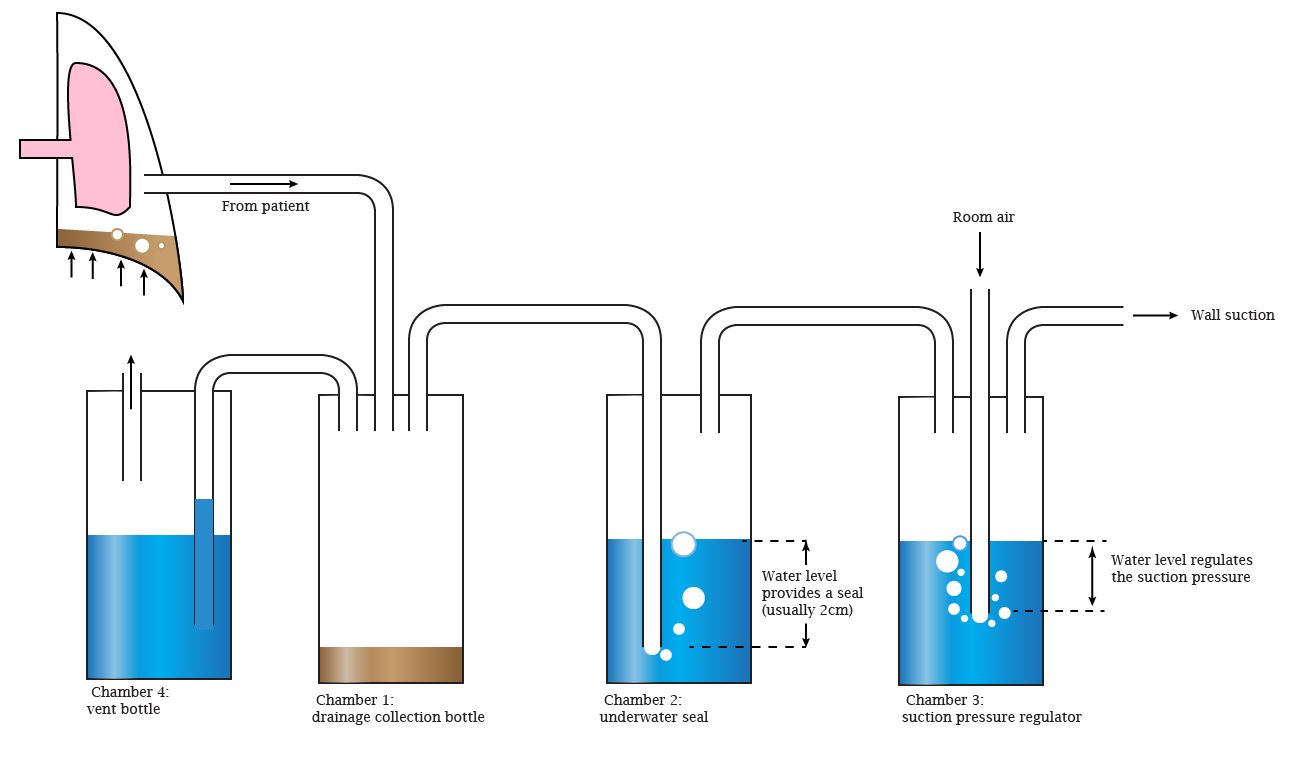 Under normal circumstances, while the suction is working, the underwater seal prevents the air from the fourth chamber from entering the rest of the system, and so it only ever vents when the air pressure in the other two chambers exceeds the water seal pressure (i.e. about 2 cm H2O).

In case there is any interest, here is a diagram of our dearly beloved Atrium system, with labels. This thing might turn up in a viva station. The examiners would typically have a whole series of these things, all set up; and the candidate would be invited to pick one which they are familiar with. Viva questions about this thing might include the following:

"Discuss the function of this device"

"What are the safety features of this device?"

"What is the purpose of the underwater seal?"

Additionally, they provide these training documents which are surprisingly full of useful information.

As Dr Stu McLay has kindly pointed out, this Kam article contains an incorrect drawing of a four-bottle system. Look at the "underwater seal" bottle for a minute, and imagine what might happen to it if firm suction were applied. 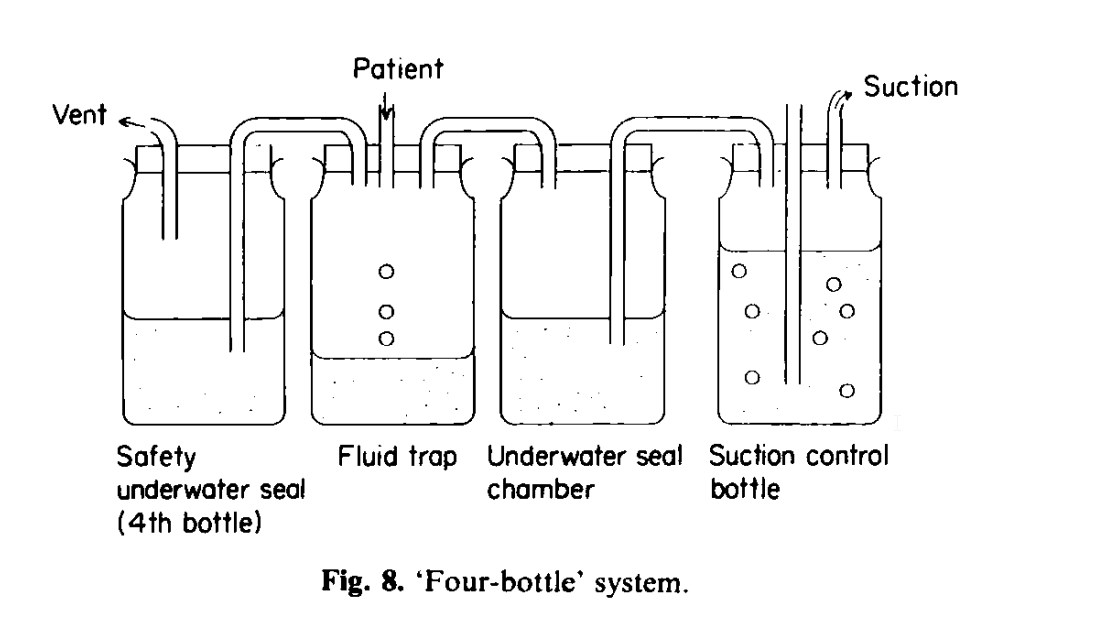