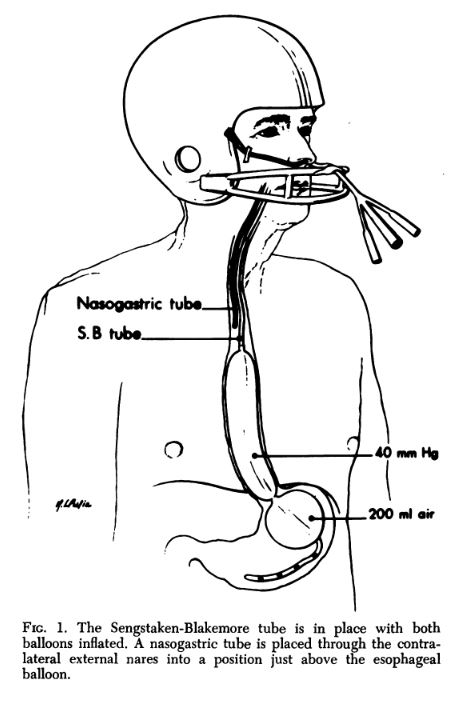 To the left one may see the grainy black and white photograph of the very first rubber gastro-oesophageal tamponade tube which was discussed in Sengstaken and Blakemore's original paper from 1950. Well, that is not completely correct- Karl Friedrich Otto Westphal had used a gastric tamponade balloon in 1930, but for some reason the name "SB tube" became a household name instead of "Westphal's Kompressionsbehandlungsonde".  In any case, the major criticism of this device was its tendency to cause life threatening aspiration or airway obstruction.Subsequent modifications of the technique made attempts to protect the patient from the risk of airway-obstructing tube dislodgement and oesophageal content aspiration.

The picture of the person in the football helmet is a  (shamelessly stolen) diagram from Bauer Kreel and Kark (1974), depicting the position of an SB tube in an awake extubated patient. After tension is applied, the tube is affixed to the face guard of a football helmet instead of  hanging from the end of the bed (this was easier to manage from a nursing viewpoint). Because this product was not supplied with an oesophageal aspiration port, the patient has a nasogastric tube suspended in mid-oesophagus. This port was under intermittent suction and free drainage, to act as a vent for swallowed secretions. The authors also recommended that this port be "gently irrigated", which sounds like a recipe for disaster in a patient with an unprotected airway.

Interestingly, the college always seem say that to describe their obviously three-lumen tube as a Minnesota tube is "acceptable". But... in fact the two are quite distinct, and if one were to dig in even the dustiest corners of the most backward endoscopy suite, one would not find even one classical SB tube. This is because the Minnesota tube is actually a modified version of the original Sengstaken-Blakemore device. The modification is an oesophageal suction port, which prevents the pooling of filth in the upper oesophagus.

You can tell them apart instantly - the Minnesota tube has four ports at the end, whereas the SB tube has only three. One can also have a Linton-Nachlas tube, which only has two ports, and a single 600ml gastric balloon. The distinction between tubes is important; the Minnesota tube's modification aims to defeat the risk of aspiration, which is a major limitation to the use of such tubes in non-intubated patients.Thus, the device in my picture is properly called a Sengstaken-Blakemore tube, and to call it a Minnesota tube would just be plain wrong. Overall, the general trend in the development of these devices has been characterised by the uncontrolled proliferation of aspiration ports, manometry lines, suction orifices, pressure-indicator balloons and other such inflatable decorations. One may follow this pattern of behaviour as it extends into the absurd.

Which eponymous tube is which?

Anatomy of the Sengstaken-Blakemore tube

This offers a vrief "portology" of the device. Obviously, when one is shoving it in, one is in some hurry (the placement of any rescue therapy device is rarely a carefully controlled and deliberate elective procedure). One should have some minimum of knowledge beforehand. In case one is interested, the total length of the tube is usually 85cm, and it comes in a series of sizes ranging from 14Fr to 21Fr.  A manufacturer brochure which answers all your questions about their specific product is available, and I plagiarise from it liberally. The unfair focus on this product is due to the fact that the local facility has recently purchased a whole bunch of them, and should not be viewed as an endorsement of this specific product (as such equipment is usually purchased according to the lowest contract bid).

The procedure of inserting a gastro-oesophageal tamponade balloon

The college asked for this in Question 30 from the second paper of 2015. They gave us a suggested technique in their "model answer" which I have modified with some of the suggestions made at the LITFL page for this procedure, and the Nepean ICU protocol for handling this device.

How do you remove thins thing? Abruptly? Perhaps. No specific literature exists to guide practice here. Generally speaking, one should only consider it if the bleeding has stopped. Locally, we manage this in steps:

Confirming the position of the gastric balloon

The balloon labelled "A" is the gastric ballon. It inflates to a considerable diameter, and so it is fairly important that you do not inflate it in the oesophagus. Hence the anxiety regarding its position.

One can do this in a number of ways. Indications for the use of the SB tube

Classically, this thing has been used for the tamponade of bleeding from a gastric or oesophageal source. It was particularly popular before the advent of easily available endoscopy; Sengstaken and Blakemore published their seminal paper in 1950 (though similar devices had been described even earlier).These days wherever varices are managed with banding and sclerotherapy this device has become less popular. Thus, the indications are:

In addition to this classical indication, the SB tube appears to have a million uses, not limited to tamponade of bleeding in hollow spaces. For example:

However, these are not what you might call "exam answers". Please don't mention them in the written paper.

Contraindications for the use of the SB tube

As with most things, EMCrit alredy did it but better

Sengstaken, Robert W., and Arthur H. Blakemore. "Balloon tamponage for the control of hemorrhage from esophageal varices." Annals of surgery 131.5 (1950): 781.