This topic had appeared in Question 25 from the first paper of 2020, where the college asked for "the complications of this procedure that are of relevance to its ICU management". The impetus for this SAQ may well have been the simple fact that this procedure is not without its complications, and many of these complications end up becoming the ICU's problem. Or, perhaps it was the concern, raised by many a surgical staff, that the ICU trainees do not appear to have a solid grasp of what exactly was done during one of these eponymous procedures (Whipples, Ivor-Lewis, Benthal, etc), or what complications to expect. As assessment drives learning, this SAQ would have an intelligent response to that concern.

The time-poor candidate has not time for idle gibberish, and needs one solid reference to read before the test date. The best resource for this purpose is probably the 2020 ERAS society guidelines,  which is a manageable 19-page document with a nice summary table.

A Whipple procedures (or Whipple's procedure) is a pancreaticoduodenectomy. It's known as a "Whipples" after Allen Oldfather Whipple, who in the 1930s modified a much older procedure originally described by Alessandro Codivilla (in 1898). Codivilla pioneered the technique of pancreaticoduodenectomy, resecting the head of pancreas distal stomach and proximal duodenum en bloc with the hospital's only surgical assitant (a monsieur Bartolo dal Monte), with the patient under chloroform. He then attached the bile duct to the remaining duodenal stump, and reattached the rest of the duodenum to the stomach in a manner reminscent of a roux-en-Y. What he did with the stump of the pancreatic duct is unclear, but he probably just ligated it, and it ultimately formed some sort of fistula.  Walther Kausch was the next to refine the procedure in 1912, but his article is too German for the author to determine how he entfernte das Carcinom; all that can be established is that it was a staged procedure and not all of the duodenum was removed. Whipple basically performed the exact same procedure in 1935 (and the patient died within 30 hours) but in contrast to the others he removed all of the duodenum. Somehow, the procedure ended up being named after him (probably because Kausch was not around to contest it, having died in 1928).

Anyway. None of this would have earned any marks.  The college wanted a list of anastomoses:

As one might imagine of a 6-8 hour procedure which ends with three anastomoses in the abdomen, "the complications of this procedure that are of relevance to its ICU management" are numerous, and making a coherent answer to this sort of question really relies on the candidate's abilities to categorise them quickly. What is offered below was constructed mainly from Butturini et al (2006), McEvoy (et al (2014) and Karim et al (2018), of which the latter offer some percentages from their case series of 98 patients. None of them offer any sort of structure, so a simple alphabetic systems-based one has been produced to help non-surgical people.

For a good summary, Aoki et al (2017) have this excellent bar graph based on Japanese data: 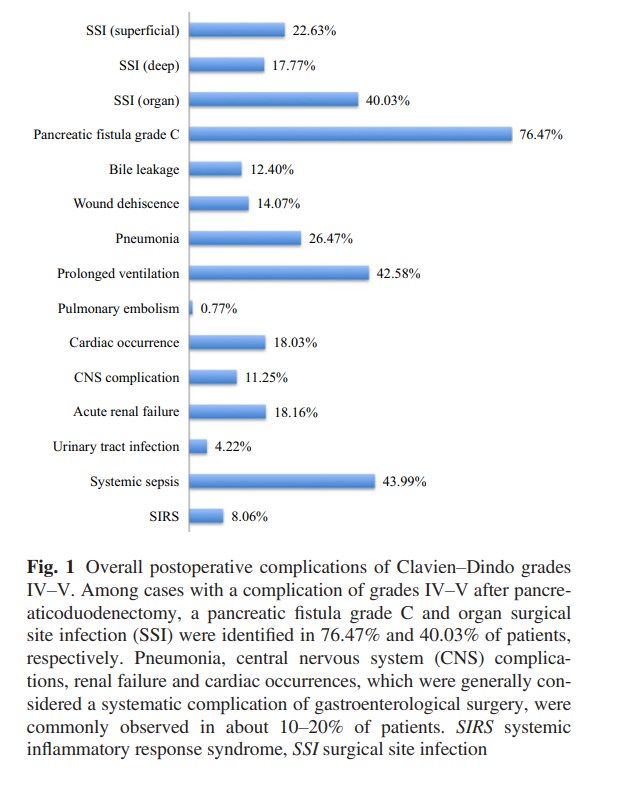 Now, to put an ICU spin on this: