Portal vein thrombosis has come up in  Question 27 from the first paper of 2012 (where you had to recognise it on CT).  The CT is how it usually recognised, because there may actually be no clinical findings. Generally speaking, these people also have liver disease, and it is not abnormal for them to have asictes and bleeding varices - which is how an acute elevation in portal venous pressure may go unrecognised until abdominal pain prompts a CT of the abdomen.

"Nothing" or "vague unwellness" may actually be the only clinical findings, but more generally people will present either with features of portal venous hypertension (such as ascites) or with abdominal pain. Either way, the presentation is usually such that would ultimately lead to a contrast CT of the abdomen.

a) can be answered just by describing the pathology on the CT. What should there be? Mathieu et al (1985) and Lee et al (2008) describe several characteristic CT findings:

Direct visualisation of the clot:

Radiology of the portal vein

Where am I looking? Where's the portal vein? Lets pretend I've never seen a CT. Here's a helpful image from Radiopedia, with nice obvious arrows pointing to the healthy vessels: 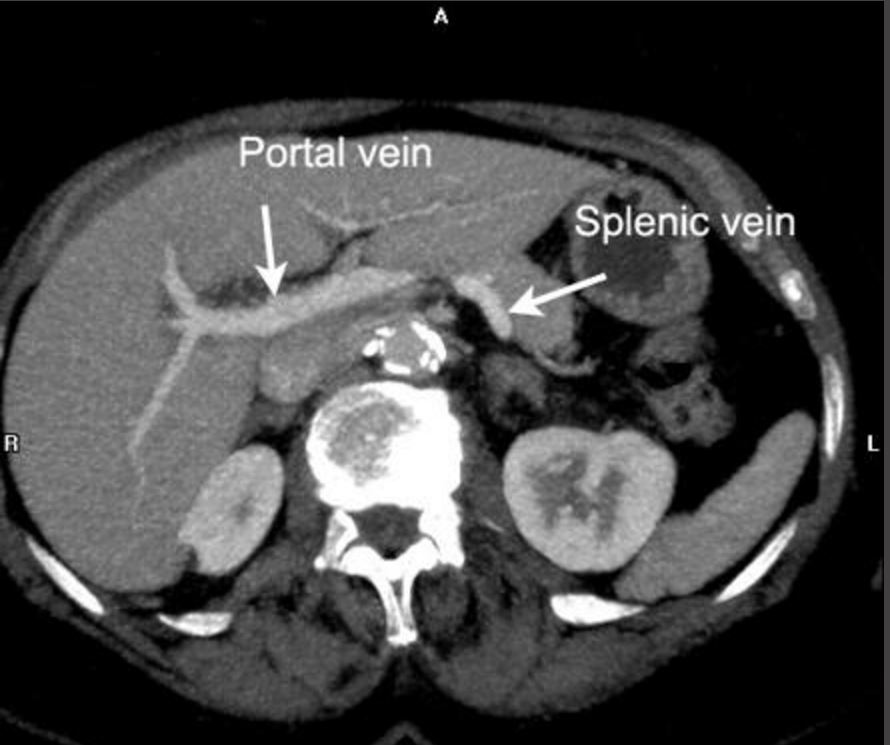 Now, here are some shots of the portal vein occluded with clot, stolen shamelessly from Lee et al (2008):

Image A shows the thrombus as a filling defect in the contrast-filled splenoportal junction. Image B is a coronal reconstruction showing some sort of low-density structure in the portal vein.

If one does not wish to pay for a pre-digested UpToDate management discussion, one may refer to freely available review articles such as Boyer (2008) or Basit et al (2015). Unless otherwise stated, these three sources have informed the discussion below.  In short, the options are as follows:

The thrombus sometimes self-resolves. It is though that in the cirrhotic community there may be frequent small thrombi forming and dissolving all the time.  If the patient is asymptomatic, there may be an argument against anticoagulation.  If the patient has significant risks associated with anticoagulation (eg. bleeding varices), one may also rely on portal cavernous transformation to divert venous flow around the thrombus. However, rate of spontaneous resolution is low (~ 17%).

Warfarin is the standard for non-cirrhotic patients and for those without malignancy. If not warfarin, then low molecular weight heparin.

Experimental or unacceptably risky treatments include:

UpToDate offers a good article about Antithrombin III deficiency, for a price.