Thrombotic thrombocytopenic purpura and haemolytic-uraemic syndrome are a couple of horrible problems which together with HELLP and MAHA fall into the spectrum of thrombotic microangiopathies. A good NEJM review article is available from 2004. TTP-HUS comes up remarkably often in the fellowship exam. Typically, its appearance in the SAQs is either accompanied by a pair of diseased-looking legs covered in pupura, or by a history of a young woman who has presented with thrombocytopenia and seizures.  It has been involved in the following past paper SAQs:

The classical literature describes a "pentad" of symptoms, consisting of thrombocytopenia, microangiopathic hemolytic anemia, neurologic abnormalities, renal failure, and fever. Not all are required; and in fact Chiasakul & Cuker (2014) found that only 7% of patients present with the classic pentad.  If renal failure is the dominant feature, one might call it HUS; the boundaries between TTP and HUS are not completely clear.

Low ADAMTS-13 levels are clearly implicated. One could really get carried away with the details of pathogenesis here. The college answer to Question 21 from the first paper of 2013 demonstrates the depth expected of the candidates:

So,  an excess of vWF leads to a systemic prothrombotic state, with microvascular thrombosis responsible for all the organ system damage.

Scully et al (2012) include this list of differentials in their guidelines statement.  In short, it is a list of thrombotic microangiopathies:

Listed often alongside TTP (as TTP-HUS), this thrombotic microangiopathy is thought to form a part of the same spectrum of disease, except the ADAMTS-13 level is often normal. Like TTP, this is basically a non-autoimmune haemolytic anaemia with thrombocytopenia and acute renal failure. Karpman et al (2017) do a good job of writing it up, and the interested reader is redirected there if they want to know more than is necessary to answer Question 22.2 from the first paper of 2022, which only asked for the causes:

Scully et al (2008) were able to relate ADAMTS13 activity with presenting symptoms to find the closest associations in TTP, among a cohort of Uk patients.

A measurement of ADAMTS13 activity which is less than 10% of population norms is generally viewed as diagnostic (Page et al, 2017). In addition to this, multiple additional abnormalities may coexist which are not TTP-specific but which support the diagnosis:

The diagnostic workup should therefore include:

The Coombs direct antiglobulin test is supposed to be negative in TTP, as TTP is not an autoimmune haemolytic anaemia, i.e. the red cells are not getting attacked by antibodies. TTP does however get some microangiopathic haemolysis, where the fibrinous debris forming on the surfaces of denuded arterioles and capillaries have an abrasive effect on red cells, turning them into schistocytes. To be sure, you could have a Coombs-positive TTP, but if you did you could probably publish a case report about it (eg. Urahama et al, 2005)

In a survey of Australian experience (Blombery et al, 2016):

This spread might suggest that the management of TTP in Australia is some sort of lawless free-for-all, but in fact we are guided by the 2012 British guidelines (Scully et al, 2012). These guidelines are fairly prescriptive, and in fact there is an excellent flowchart of management which is reproduced below with no permission whatsoever: 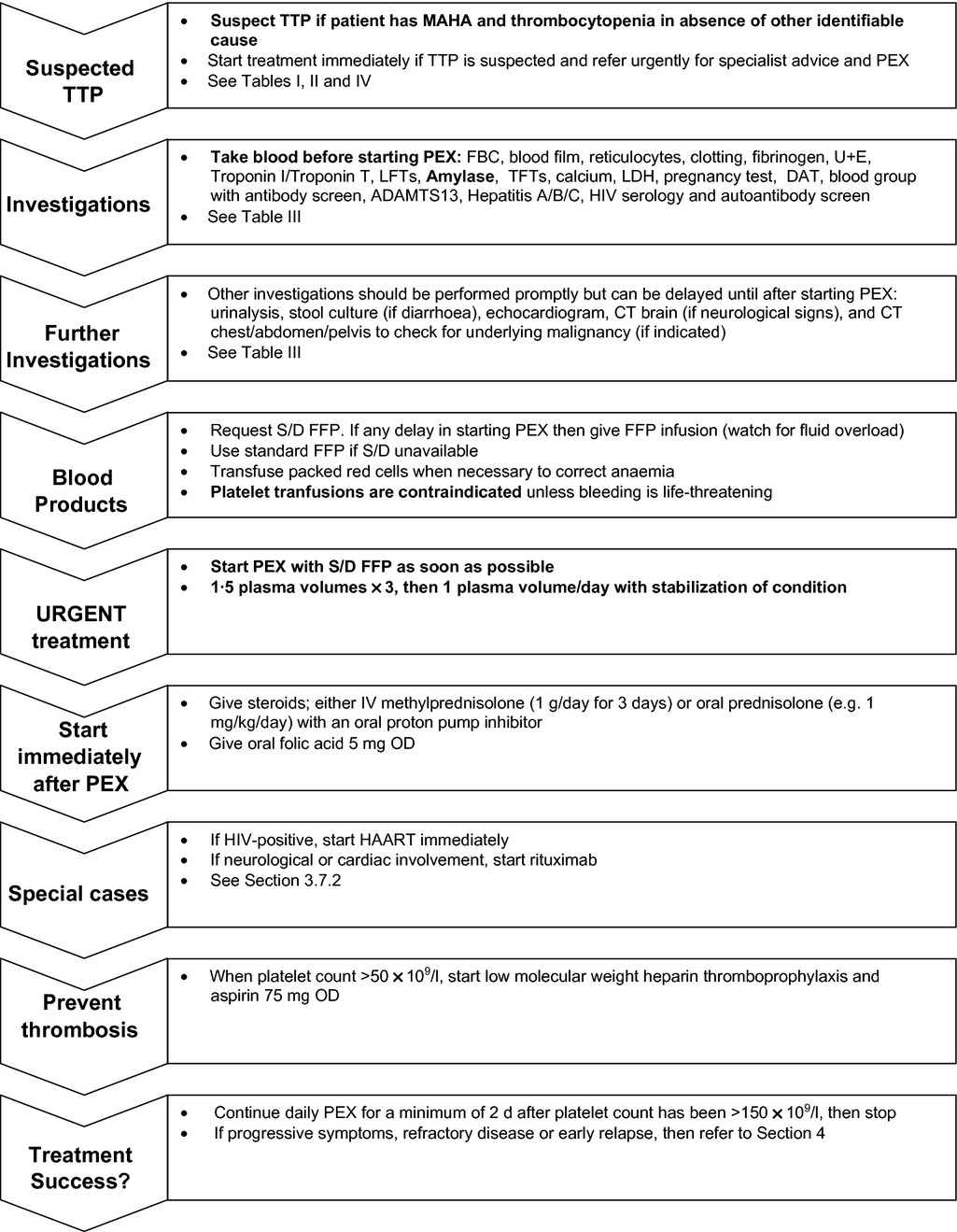 Plasma exchange in TTP aims to remove the ADAMTS-13 inhibitor while replacing the missing ADAMTS-13 protein, and thus the replacement fluid needs to be FFP (as a pure albumin solution would have no ADAMTS-13 in it). One is obliged to continue the treatments until the microvascular thrombosis and thrombocytopenia are no longer posing a problem. The college answers also mention the preferential use of cryodepleted plasma, which has less vWF than standard FFP.

The technique of plasmapheresis is discussed in a frustrating article of which only view the first two pages are available to the subscriptionless reader. It is at a basic level the centrifugal separation of blood components.

In contrast, a decent quality plasma filtration article is available to the pennyless public. It describes the process as being virtually identical to the haemofiltration of renal replacement therapy, with the main difference being the size of the membrane pores (they need to be large enough to allow the extrusion of all non-cellular blood components).

A more detailed discussion of plasmapheresis is available in the over-long answer to Question 14 from the first CICM fellowship exam paper of 2010.

Tsai, Han-Mou. "Advances in the pathogenesis, diagnosis, and treatment of thrombotic thrombocytopenic purpura." Journal of the American Society of Nephrology 14.4 (2003): 1072-1081.

Scully, Marie, et al. "Guidelines on the diagnosis and management of thrombotic thrombocytopenic purpura and other thrombotic microangiopathies." British journal of haematology 158.3 (2012): 323-335.