The topic is discussed in full by Russell E. Lewis in his 2011 article for the Mayo Clinic Proceedings ("Current Concepts in Antifungal Pharmacology"). However, my main source for this information was Goodman & Gilman's The Pharmacological Basis of Therapeutics, 12th Ed.

All molecule images are from Wikimedia Commons.

The drugs below are presented by class (in order of chronological appearance).

Polyenes weaken fungal cell walls by binding to ergosterol. The cell wall becomes permeable, and the fungal cells swell with fluid and die. There are probably about 200 different polyenes with some sort of antifungal activity. Griseofulvin is the only member of this group. It is essentially colchicine for fungi: it binds to tubulin, impairing synthesis of microtubules and thus preventing the formation of the mitotic spindle. Flucytosine is the only real member of this group. Fungi deaminate  flucytosine to 5-fluorouracil which results in impaired DNA synthesis. 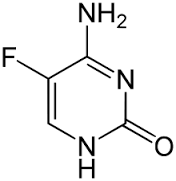 Azoles in general inhibit 14-α-sterol demethylase, an enzyme involved in the synthesis of ergosterol for the fungal cell membrane. This results in the accumulation of 14-α-methylsterols, the presence of which disrupts the organisation and integrity of fungal cell walls and impairs membrane-bound enzymes. Evidence for (against) routine post-operative use

The major generational change with azoles has been slower metabolism and less effect on human ergosterol synthesis.