This topic has never been examined in the written paper, but an entire chapter of Oh's Manual is dedicated to it. In 2015, tt seemed important to include a summary of it in the Required Reading section, in case the college somehow get around to asking about it. Considering how often this is seen in clinical practice, it is remarkable that an SAQ did not come along until Question 13 from the first paper of 2020. In that question, the examiners were interested in the changes to antibiotic choices which might be expected in the setting of immunosuppression, and how one would manage the immunosuppression if the patient has an active infection.

Unless otherwise stated, the information below is derived from Oh's Manual. For those without freegan access to The Manual or similar textbooks there really is no single resource to cover this topic. Satisfactory alternatives include the Google Books version of Stiehm's Immune Deficiencies (1156 pages!) and this 2009 update from the Journal of Allergy and Clinical Immunology. Unfortunately, for most people, the fastest revision strategy is to get Oh's Manual.

Immunodeficiency disorders can also be divided into primary and secondary; primary being disorders where the immune system components are defective due to some sort of disabling mutation. An excellent summary table is available in Armstrong (1991): 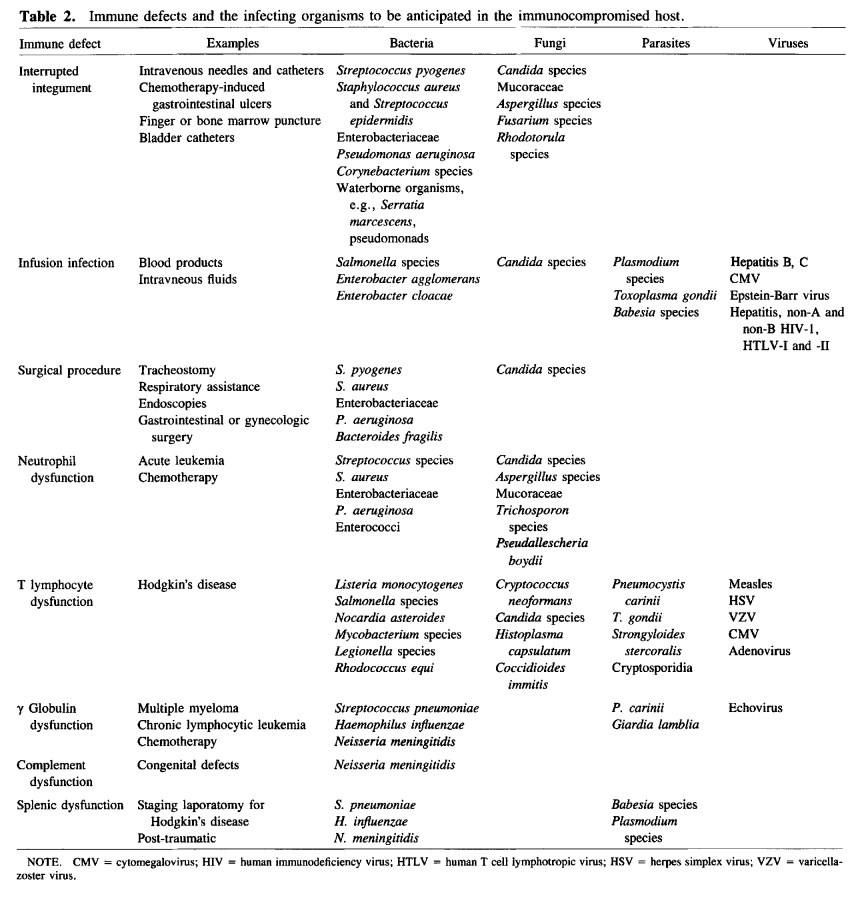 What makes them defective? Neutropenia is neutropenia, and having too few of them makes you rather defenceless, but it is also possible to be functionally neutropenic with normal neutrophil numbers. For instance, let us take the example of the chemotherapy patient whose counts never quite recover from their last cycle. The concerned haematologist gives them some filgrastim and becomes rather less concerned when their WCC returns to normal, but are they really protected? G-CSF produces a sort of "emergency" haematopoiesis and sends a bunch of immature neutrophil stem cell precursors into the circulation. Once there, these cells are sufficiently neutrophil-like that they are able to fool the automated cell counter, but upon closer scrutiny they perform few of the normal neutrophil fuinctions, have greatly impaired chemotaxis, and are basically incapable of the normal oxidative burst (Thunström et al, 2018).

Anyway. The following list of possible causes may come in useful one day.   If one needed to dig deeper for some reason, one would find gold in the free article by Lakshman & Finn (2001).

Characteristic infections in neuropenic or neutrophil-defective patients are mainly infections by extracellular pathogens:

Laboratory investigations to explore the extent of their neutrophil defect include:

A CICM Part II candidate's revision of this primary-level topic could safely be limited to Chapter 8 from the 5th edition of Immunobiology: The Immune System in Health and Disease by Janeway et al (2001), which happens to be free.  Without entering a protracted digression into immunology which the author only pretends to half-understand, it would suffice to say that T-lymphocytes play a roll in cell-mediated immunity as well as the coordination of humoural immunity. Their main targets are viruses and virus-infected cells (which end up being destroyed by effector T-cells). T-helper cells are also instrumental in activating blissfully unaware macrophages which harbour intracellular parasites such as M.tuberculosis and M.leprae. TH2 cells also participate in humoural immunity by activating naive antigen-specific B cells to produce antibodies in response to more "classical" pathogens such as Gram-stainable bacteria and protozoa.

A problem with the B-lymphocyte population would lead to a scenario where antibody-mediated immunity would fail to control the pathogen population which it is meant to control. Antibody-mediated immunity covers all the sort of stuff you would normally expect to become immune to over the course of living a normal life (for example, encapsulated organisms which cause pneumonia and meningitis), commensural flora normaly kept at basy by mucosal IgA,  as well as a bunch of organisms which one might summarise as "Victorian-era killers" against which virtually everybody today is usually vaccinated. The best article to look at this sort of thing is actually these papers by Nixon et al (2017) and Looney et al (2008), which are all about the infectious complications of rituximab. This makes logical sense because rituximab is a directed antibody which causes the death of all your B-cells, flushing your humoural immunity down the toilet.

Infections you'd never expect because normally everybody has good humoural immunity against them:

Laboratory investigations would include:

Complement, the most basic immune system ("established in the common ancestor of eumetazoa more than 500 million years ago"), can occasionally break down spontaneously as the conseqence of depletion by plasmapheresis or sepsis. Bacteria and fungi are then free to run rampant.

The post-splenectomy state is another form of immunodeficiency, and clinically it looks a lot like a failure of humoural immunity. This has come up in the exams a lot, and therefore merits its own summary page.

Question 13 from the first paper of 2020 gave the candidates a patient who has been taking steroids and antirejection drugs for renal transplant. Now, he presents with what sounds like some sort of pneumonia; "pulmonary infiltrates" to be precise. And the transplant is apparently not doing so well either. "Justify what empirical antimicrobial treatment you would commence", the examiners cackled sadistically.

The exact drug choices are obviously going to be difficult to discuss, because they will depend to a considerable degree on the local microbiome and the previous infections of this obviously infection-prone patient. Did they grow Pseudomonas or Prevotella last time they were in hospital? Clearly, the college could not possibly have wanted any specific drug choices or drug doses. Instead, some sort of basic fundamental principles were being asked for, right?

Well. Turns out, there is not a lot out there. An excellent article by Armstrong (1991), though dated, reveals why that might be. Though it is a thorough review of the subject, the auther was unable to discuss the principles here in terms of generalities, and was basically limited to listing pathogens and suggested drug cocktails to manage them individually. That's also good (his Table 3 was so useful that it's reproduced above but it does not have any advantage over, say, a subscription to the Sanford Guide mobile app. There is a suitable UpToDate article to turn to, which also has some

Anyway. What trends can we derive from this, that could be compiled into a guide for management, rather than a list of recipes?