This is a discussion of the metabolic requirements of normal neurological function, as well as the influences on these requirements in unusual physiological circumstances.

It is interesting and educational, and furthermore elements of it appear in Oh's Manual, making it a likely target for future questions. Specific questions regading this material are more likely to appear in the primaries. The fellowship candidates are more likely to dip into this as a part of the "rationale" section in questions which ask them to critically evaluate some aspect of exotic neuromonitoring,.

Metabolic substrate of the brain

In physiology textbooks, a consistent generalisation appears - that the human brain demands high octane fuel in the form of oxygen and glucose.

In 1940, Wortis and Bowman published a paper detailing their research into the brain metabolism of "normal, schizophrenic, paretic and senile subjects". As interesting as that would be, it is not available for free consumption; those of us crippled by poverty must make do with the 1949 opus by Scheinberg and Stead, who measured the oxygen extraction ratios of young men strapped to a tilt-table. Their findings were as follows:

Oxygen delivery to the brain is about 150-300ml/min (if one assumes a Hb of 150g/L, an oxygen carrying capacity of 1.34ml/g, and a saturation of 100%- which gives an oxygen content of about 200ml/L). Calculated from this, the brain receives somewhere around 150-300ml of O2 per minute, which could be 2-6 times the required amount.

From the above calculations, it would seem the brain extracts approximately 35-25% of the delivered oxygen. This is consistent with the normally measured jugular venous saturation levels (55-75%).

That's a lot of of redundancy. However, the whole liver is only producing it at a rate of about 100-200mg per minute. Thus, the brain actually consumes around 70% of the total hepatic glucose output.

The effect of hypothermia on brain metabolism

When you are getting your aortic arch operated on, you become the ideal substrate for the hypothermia researcher, because the anaesthetist has cooled you to a ridiculously low temperature (routinely around 15-20°C). Why he did it, he himself does not know, as the mysterious mechanisms of hypothermic neuroprotection are even today poorly understood. All the same, the environment of deep hypothermic circulatory arrest (DHCA) produces good studies of hypothermia.

Armed with the routine set of equations, one group of investigators managed to collect CMRO2 data from patients cooled to 15°. Compared to baseline (37°C) values, the CMRO2 of deeply hypothermic patients were down to around 15-16%. That would make the minute CMRO2 about 0.5-0.8mlO2 /100g/min. The entire brain would run on no more than 7.5-12ml of oxygen per minute. Well, "run" is perhaps a misnomer. It would survive. Little activity inside it would take place; certainly nothing we would be able to describe as consciousness. Burst suppression appears at anywhere around 24°, and at around 17° one experiences what the EEG scientists describe as electrocerebral silence, a finding which is so precisely defined mainly because it is usually associated with brain death.

The effect of hyperthermia on brain metabolism

Unlike hypothermia, most of our detailed knowledge of hyperthermia comes from exposing rats to such danger. On one such occasion, the rate of rise for cerebral metabolic activity was pretty linear - 5-6% per 1°C, at least up to a temperature of 42°. Extrapolated from this, with a fever of 41°, a human brain should have a metabolic rate which is increased by about 20-24%.

Unlike the deeply hypothermic aortic surgery patient, these days there are no therapeutic situations in which profound hyperthermia can be safely observed in the human. Certainly, they sometimes present to hospital in a state of severe hyperthermia, but in those circumstances the attention is usually directed to their resuscitation rather than the careful collection of jugular venous samples.

However, in the past "therapeutic hyperthermia" was indeed a serious concept. In his book "Neurobiology of Hyperthermia", Hari S. Sharma recalls the fact that temperature above 41° kills cancer cells in a hypoxic environment. These days this is usually a loco-regional affair, like its natural extension- the radiofrequency ablation technique. But in the past there had been some interest of using whole body hyperthermia to treat cancer. 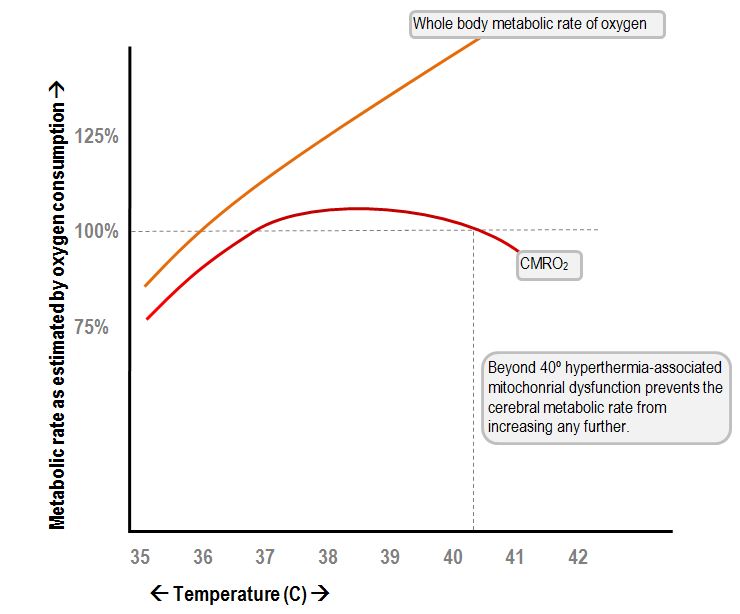 Interersting observations were made. For instance, cerebral bloodflow autoregulation tends to break down at high temperatures (above 41°). On top of this, the mitochondrial utilisation of oxygen becomes less efficient, so the oxygen consumption may not increase as much as one might expect from a direct linear relationship. This seems to be unique to the brain; other tissues burn oxygen faster with increasing temperature.

The effect of anaesthetic drugs on cerebral metabolism

It would stand to reason that any pharmacological agent which decreases excitatory neurotransmission might act to decrease the cerebral metabolic rate in general. This, in turn, might be of benefit when cerebral blood flow is poor. The applications of anaesthetic drugs to neuroprotection are thus obvious, and thiopentone coma is still among the last-line recommendations in the list of management strategies for severe traumatic brain injury.

The oft-quoted baboon study gives one the impression that this is indeed a workable solution, even though to derive maximal benefit from it the barbiturate-soaked baboons would have needed to already be in a coma when their stroke occurred.

So, precisely how much does anaesthesia affect the cerebral O2 metabolism? Early in the 1960s a study was published which studied the effects of brabiturate coma on the cerebral metabolic rates of eleven healthy volunteers. The volunteers were anaesthetised and paralysed so that their PaCO2 could be precisely controlled (specifically, a Bird respirator was used). Cerebral oxygen consumption was calculated from the measured cerebral blood flow and carotid-jugular oxygen difference. In this study, thiopentone decreased the cerebral metabolic rate by an average 55% from the baseline observed in alert individuals.

Even though thiopentone is the classical agent for this, propofol has also been investigated and we have measurements of the cerebral arteriovenous O2 difference in propofol-anaesthetised brain injury patients. Weirdly, with the use of propofol - even at a fairly vigorous dose- the A-V O2 difference remains unchanged. However, the cerebral blood flow is decreased by a large margin, almost 30%. Thus, it stands to reason that the cerebral metabolic rate must be decreased by a proportional fraction.

Scheinberg, Peritz, and Eugene A. Stead Jr. "The cerebral blood flow in male subjects as measured by the nitrous oxide technique. Normal values for blood flow, oxygen utilization, glucose utilization, and peripheral resistance, with observations on the effect of tilting and anxiety." Journal of Clinical Investigation28.5 Pt 2 (1949): 1163.