This is a discussion of the normal mechanisms which maintain the driving blood pressure gradient across the cerebral circulation in the face of wildly fluctuating systemic conditions. Question 1 from the second paper of 2009 briefly touched upon the definition of cerebral perfusion, and then went on to ask more pragmatic details about the utility of using CPP as a therapeutic target. The role of cerebral bloodflow autoregulation in the pathogenesis of PRES (posterior reversible leukoencephalopathy syndrome) is also touched upon in Question 14.1 from the first paper of 2016.

Strictly speaking, this is the difference betrween cerebral arterial and cerebral venous pressure- the driving gradient for cerebral blood flow. As we have few ways of measuring the pressure in the dural venous sinuses, we have to use the intracranial pressure as a surrogate. Thus, cerebral perfusion pressure is the ICP subtracted from the mean arterial pressure (MAP). Or the CVP, for that instance. It is not inconcievable that one's CVP might be higher than one's CSF pressure in the context of some sort of severe right heart problem.

Changes in MAP and ICP are frequently out of our control. However, cerebral blood flow must remain stable, so as to supply a steady diet of oxygen and glucose to the brain tissue. As the MAP changes and ICP remaisn the same, the only variable left to control is the creberal vascular resistance, and this is the property subject to local control.

Harper et al published a seminal paper on this in 1966, describing the relationship of cerebral blood flow and blood pressure in normocapneic and hypercapneic animals.

In essence, the objective of manipulating creberal vascular resistance is to maintain the rate of cereberal blood flow at around 50ml per every 100g of brain tissue, per minute. In normal brains, the flow rate is maintained - provided the CPP remains within the range of 60-160mmHg. Above and below this perfusion pressure, autoregulation breaks down, and creberal blood flow increases or decreases linearly, as a direct function of increasing or decreasing perfusion pressure. This is expressed on a familiar graph, which I will reproduce. 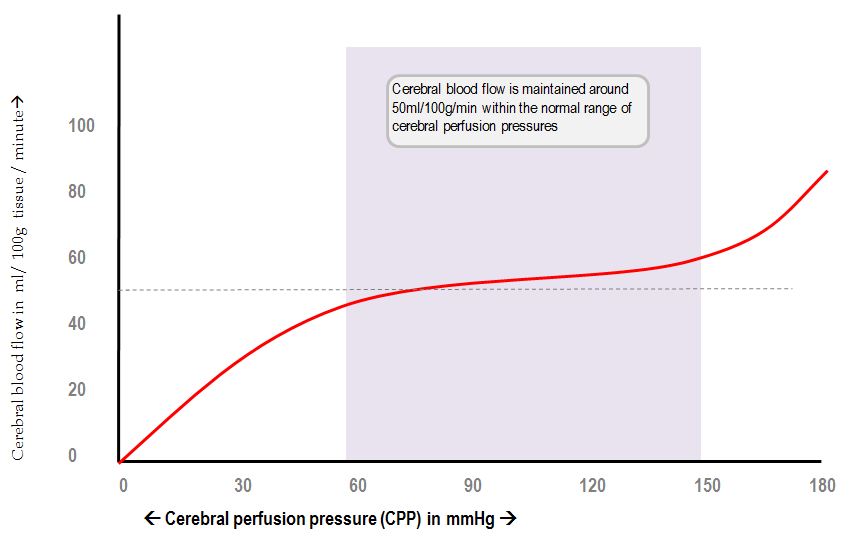 One would expect ischaemia to develop if the cerebral blood flow drops below the normal values. However, some redundancy exists in the matching of cerebral metabolic supply and demand - the brain only extracts about 20% of the delivered oxygen, and about 10% of the delivered glucose. Thus, it is possible for cerebral blood flow to drop below the normal range without any physiological consequences.

It is a purely local mechanism, as far as anybody can tell. Certainly animals seem to be able to autoregulate their cerebral blood flow in spite of sympathetic denervation.

Local factors which influence cerebral vessel diameter seem to be mainly metabolic byproducts, or the deficit of metabolic substrate:

The following is a crudely approximate list of pathophysiological conditions which can impair the autoregulation of cerebral bloodflow:

Harper, A. MURRAY. "Autoregulation of cerebral blood flow: influence of the arterial blood pressure on the blood flow through the cerebral cortex." Journal of neurology, neurosurgery, and psychiatry 29.5 (1966): 398.

Schaafsma, A., et al. "Cerebral perfusion and metabolism in resuscitated patients with severe post-hypoxic encephalopathy." Journal of the neurological sciences 210.1 (2003): 23-30.